Agasunset shows us one of her necklaces that was inspired by "Twilight Saga". 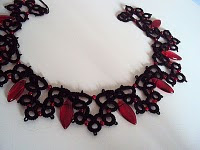 Vanessa tatted this Easter bunny inside of an Easter egg that was her contribution to a group entry in the Canberra Show. She is unable to credit the designer since the pattern didn't have a name attached to it. 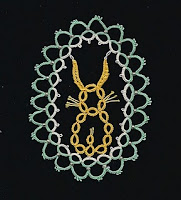 Charlotte is all out of heart motifs to attach to wedding congratulations cards, so she completed the Queen of Hearts motif from Mary Konior's Tatting with Visual Patterns. 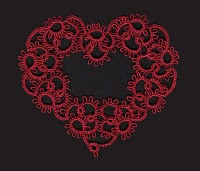 Diane has finished the Primrose Path doily from A Pattern Book of Tatting by Mary Konior worked in Lizbeth, size 20, color #117 and #651. 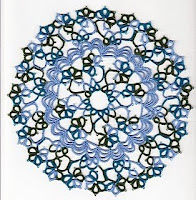 Fox tatted Two Layer Tatting, by Jennifer Williams from the 2009 Ring of Tatters Magazine using some scrumptious new HDT from Tatskool, called Daffodil Dill. The charming pink jacket is being decorated with a perky pink edging and a pretty variegated treble clef for Fox's granddaughter. 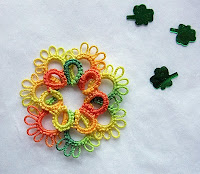 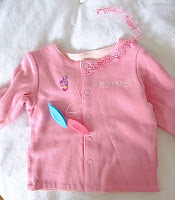 Wally thinks one of her Spanish group has come up with a new technique. Have you seen this done before? 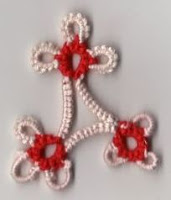 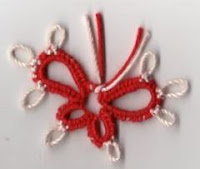