Krysta tatted this small motif from an old Anna Burda Needlework magazine which is one of the easiest. She wanted to know if some small tatting thread could be used in combination with some larger thread and she found Flutterflake that uses size 80 and size 20 thread together and it was perfect to experiment with. She test tatted Frivole's Flowering Quatrain bookmark in Lizbeth Size 20 color 671 Christmas Red. The butterfly by Jennifer Williams uses using daisy picots and she tatted it in Lizbeth size 20 in pink and white. This Celtic Five Point Motif she did in Lizbeth size 20 in colours 656 and 684 involves making two separate motifs and interlacing them. 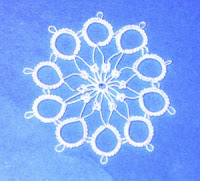 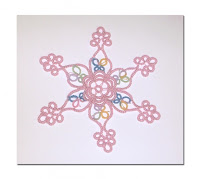 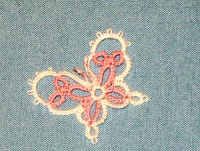 Wooroosa worked very hard last week connecting the motifs and tatting the rows of chains on the Corona doily.

Marie has tatted another of Anne Bruvold's dragons in size 10 turquoise and green crochet thread. 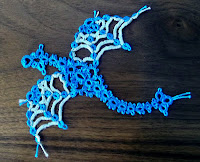 Laurette tatted these?bookmarks from Mary Konior's Tatting with Visual Patterns made from the Anniversary edging. The left one is made with unknown variegated yellow and DMC brown in size 20 and the other one is Lizabeth #166 Pink Cocoa.

Lelia tatted this heart in size 40 LizBeth colour 145 and some smaller heart doodles in size 20 LizBeth colour 628. The motif from Mini Tats by Patti Duff was done in Lizbeth size 20 colour 628 and she plans to use it with a fabric flower. She has lots of flower doodles that she made emptying shuttles and lots of other types of doodles also a result of emptying shuttles that she will be dropping in the mail. Two more motifs from Patti Duff's Mini Tats done in Lizbeth size 20 colour 684 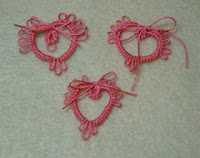 Anika needle tatted these 2 motifs in size 80 using her smallest needle but they seem more like size 50 to her. 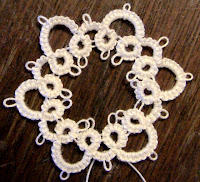 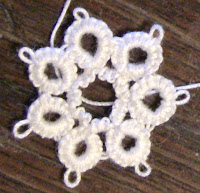 Prabhjyotsaini posts pictures of earrings which she made for Valentine's Day fundraiser for her daughter's school. The first pair were created from a picture she saw in a magazine. Other designs came from Nancy Tracy at be-stitched.com, Jane Eborall's Winsome Drop Earrings pattern and the cute little bookmark she made from Yarnplayer's Dream Earrings pattern. 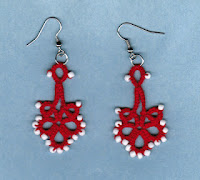 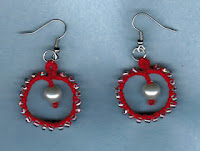 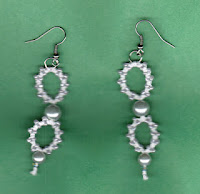 Kristen couldn't resist buying more thread and used it to make another necklace. These motifs will be part of a larger project.

Marta created a mixed media textile triptych for her diploma, complete with tatted accents for one beautiful work of art.

Nancy made these earring for her daughter in size 20 thread using a pattern from free-tatting.com. Then she did some more both with and without beads. 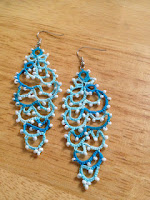 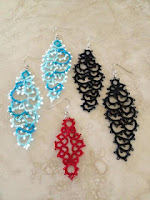 Bonnie emptied her shuttles and in the process covered Matilda, the teddy bear with tatted butterflies. 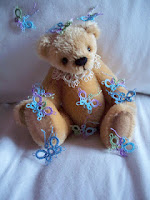 Ancolie tatted this square motif design by Lene Bjorn from Book Tatting Fantasia 2 by Iris Niebach which she found difficult to tat. 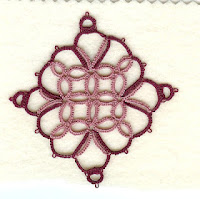 Diane thought size 80 Lizbeth, Rainbow Taffy would be perfect for this hanky edging, but now she's not sure if the blue is a good enough match. Her 10 year granddaughter wanted to learn to tat and it looks like she's getting the hang of it. 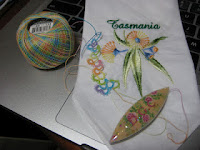 Fox tatted this Anniversary Motif by Mary Konior motif using a sample of Krystle's size #80 HDT. She's doing an edging in Sherry's Picadilly HDT size 50, but not the Iris Niebach pattern she had planned which had enormous picots and used up the HDT too fast. The row of crocheted chain makes a good foundation for adding tatting to a hanky, but she's finished with hanky edgings for a while. She misread the pansy pattern from the Priscilla book done in size 40 Lizbeth so it didn't come out quite the way it should have. 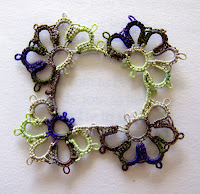 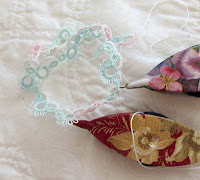 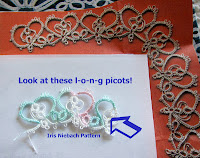 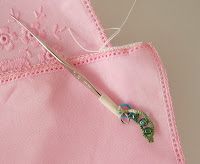 Frivole has the link to her Flowering Quatrain bookmark pattern posted. She's been making progress on her Butterfly Doily but she doesn't like how the row after the butterfly looks as it seems to detract from the butterflies, but she's not sure she wants to change it because it may mean changing all of the subsequent rows. 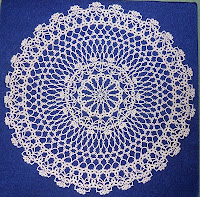 IsDihara loves the way Lizbeth's Autumn Apple Pie looks on the ball, but she wasn't happy with how it looked tatted. However in Martha Ess' broomstick tatted bookmark and in Mary Konior's one shullte edgings like Curds and Whey, it does look very pretty. Here is Jane Eborall's Celtic Snowflake done in Lizbeth size 40 #163 Blue Ice & #149 Peacock Blues. Initially she added beads to the joining picots which changed the size and shape of the motif, so she had to re-tat the design in white to make it fit. 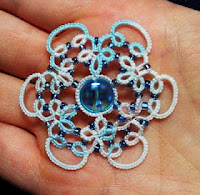 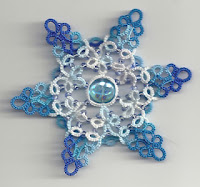 Jess received some interesting things from across the pond with some tatted surprises inside. Jon's Chinese Coin Bookmark was tatted with a slight boo boo.

Kelly has been busy making these jewelry sets to sell this week. The pattern is Krystledawne`s Spanish Dancer that she helped test tat done in Karey`s beautiful HDT in size 20. 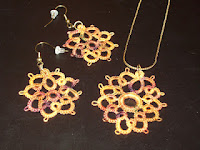 Orsi wants to create an edging and this is her first draft that she will tweak until it's perfect.

Wanda's Pay It Forward gifts were some Altoids tins decorated a la CQ with tatted bits and charms. The PIF gift she received from Umintsuru is a pair of gorgeous tatted earrings. 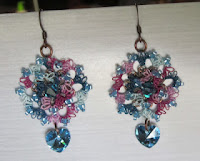 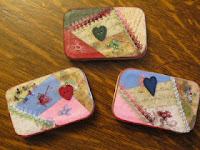 Posted by Sharon at 2:02 PM No comments: