Liyarra and Dantatter have gotten together for a Tat'n'chat and they worked on a pattern whose source neither of them know. Dantatter's is in size 20 Aida and Liyarra's is in Bre-Aly HDT "Dream" size 30. This next motif is from The Tatted Artistry of Teiko Fujito in Venus size 40. Musterteil from the book Occhi-Schiffchenspitze- Frivolite by Langwieser and Scharowa is tatted in the very colourful Lizbeth "Razzle Dazzle" size 40. 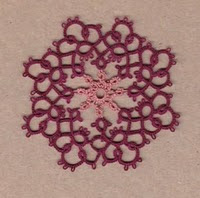 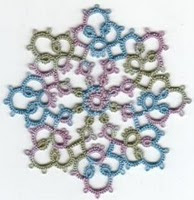 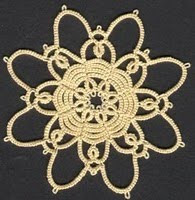 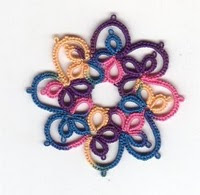 SunshineCraft had been defeated by one pattern but here she is with several more that she has mastered. From the Japanese tatting book with bits of mignonette, the white one is in DMC Cebelia 10 and the pink are DMC Cebelia 20. The little tatted butterfly done in DMC Cebelia 20, dyed with batik colours is by Anna Wuerfle Brown. 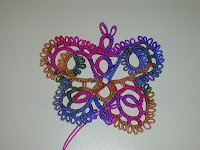 Fox did Vinnie's doily again, but when she missed a ring and it still seemed to work she decided to carry on but it resulted in a design that wasn't round any more. The thread is Karey's HDT. The baby jacket is done and the tatting attached away from the snap, which is practical, because after all who wants to fuss with snaps hidden under lace, when dressing a baby. 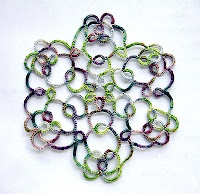 Heather gives us a better view of the tatted medallions she completed using beads. 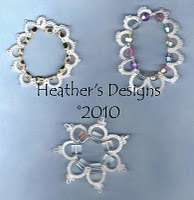 Marty has plans to teach Bonnie to tat while she's on vacation, so she's been emptying shuttles by making lots of little butterflies. Since she had quite a bit of thread on some, she tried making something a bit bigger, like Jane Eborall's newest butterfly bookmark. It's made of one strand of variegated quilting thread and one strand of yellow Cebelia wound together. It worked out nicely, except that is has a shorter tail.

Hi Sharon,
Sign me up for #3, please! I find belonging to this group very motivating.
Fox : )