Sue tried a design that was supposed to be a large medallion but after the first round she wasn't sure that she understood the directions because what she ended up with looked a lot like a flower. She tried the Rose Medallion from Tatting with Anne Orr and didn't join the rose chains exactly the way they should be, but she really likes the way it turned out. 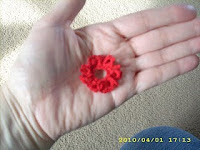 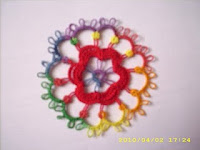 NancyD is tatting a US flag and she took her project with her to the park for International Tatting Day. The pattern is from the November 1976 Workbasket and was a good conversation starter. 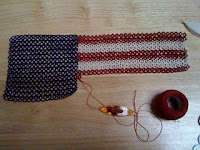 Katherinne has been tatting but she can't seem to find all the pieces, they are either somewhere "safe" or one of the family pets has taken it. She still has an admirable collection to show. The snowflake is from DMC Library Tatting Book, the 8-Inch Doily is Ruth Perry's from "Easy Tatting" and the "Flower Snowflake" that didn't want to lay flat until it had a time out with the iron. 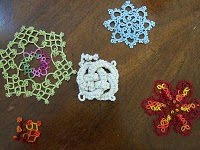 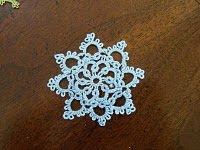 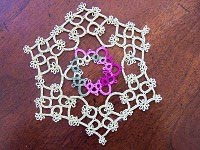 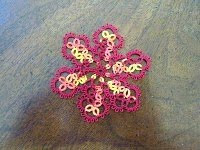 Linda's Easter Basket with Mrs. Rabbit has 2 tatted Easter Eggs. The pattern is from Emma Crew and the threads used are Lizbeth 20 - Jelly Bean and Sherbert Delight. She soaked one pair in pure liquid starch and the other pair spraying this clear liquid sealer. She did not like liquid sealer at all. Gluing the tatted egg to the pure white egg form made the tatting stand out. Good information to know.

Vinnie was wearing black and white and she wanted something to go along with it so she made this white bracelet with the black beads and hand crafted a closure to go with it. Check out the details on her blog. 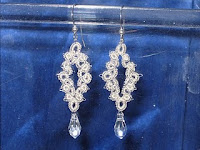 Heather tatted over a half marble and managed to get a very nice design. 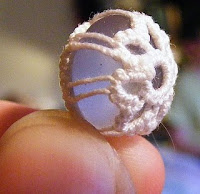 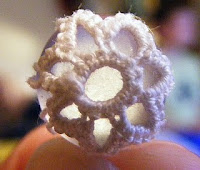 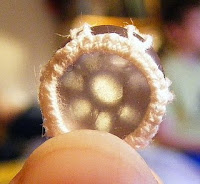 M tatted Beatrice from the book Tatted Doilies by Iris Niebach in Lizbeth 40, col 683, leaf green light. She's on the hunt for a nice size pattern that she can get her teeth into and enjoy tatting. Drop by her blog with you suggestions.

TattingChic has posted a picture of some tatting done for International Tatting Day. Remember if you are interested in learning to tat, or know someone who is, TattingChic has a giveaway for the "Learn to Tat" book.