In honour of International Tatting Day Corina shows us 2 of the larger pieces she has made. The first came from a Burda magazine, but she can't remember where the second came from. 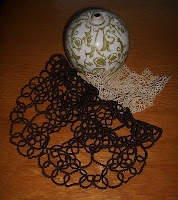 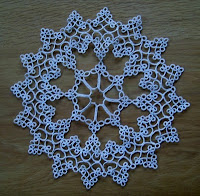 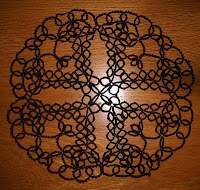 Sue has been working on her doily until she realized that she had joined to the wrong place. It worked and it looked good to her, but it wasn't being true to the pattern so she cut it off. (Personally if it's working, I'd have kept going just to see how it turned out.) Here it is with round 6 finished the right way. 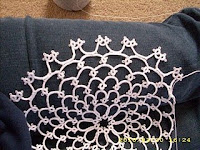 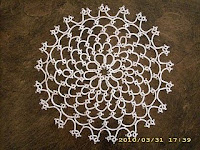 Agasunset worked on an Art Deco design that didn't look right so she cut it off and tried again. It still isn't working so she dropped it in favour of working on a purple bracelet. 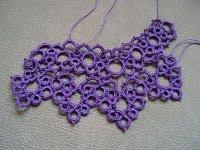 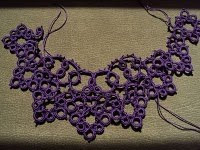 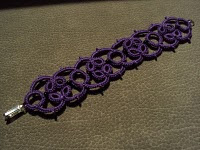 Wendy has finished a length of Mary Konior's Curds and Whey to be sewn around a bonnet and she needed a complimentary design for the edge of the bonnet, so she came up with a ring only design like the edgings that were popular before chains were invented. You can find variations of the design in many antique publications. 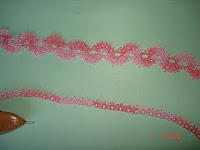 Ann hasn't had a chance to tat yet today, but she wanted to wish everyone a happy International Tatting Day before the day was gone, so she has created an interesting tatted visual with a tatted piece done by her grandmother as a backdrop for the flower created by her shuttles and a ball of thread.

IsDihara had a lovely visit with her friend who taught her to needle tat and here's a whole afternoon of tatting.

Steph is working on making Jon Yusoff's Rosette Doily. a little larger to fit a large round end table. The thread is Olympus 40 in lime green and variegated lavender. 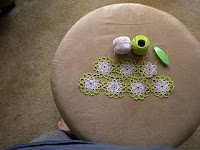 Vinnie finally gets to show us what she's been working on. It's 'The Dark Woods Doily' tatted in Anchor size 20 cotton. She had it done just in time to celebrate International Tatting Day. 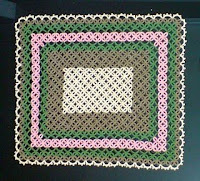 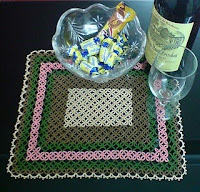 Diane is making progress on my Primrose Path doily but she's getting to the point where she has to make some thread colour choices and she's looking for input. She's also won a bookmark from Laura who sent her some extra surprises.

Ellen is getting ready for Pameran Poskad 2010, a group exhibition of postcard sized artworks and her 10 pieces are all tatted laces. "Parrot Talk" by Mary Parrott, "Blooming In Spring" - a bookmark design by Jos van der Helm, "Listen To The Wisely" comprised of 2 of her small owl designs, and Dianna Stevens' horned owl bookmark design. She did 2 pieces in creative tatting, one called "Floral Scroll" and the other "Pretty In Red".

Fox has some edging done for some bunny socks, a wee bunny motif for a crocheted hat and a book giveaway for interested tatters. 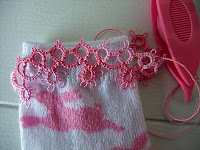 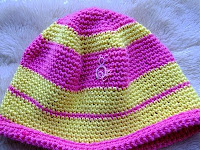 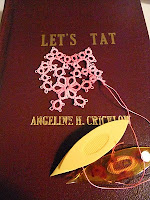 M was doing really well, until she realized that she'd missed a join way back there. Been there, done that and I'll bet a lot of other tatters can relate.

Martha tatted a dolphin for International Tatting Day, even though Georgia suggested fish. It's close enough, they both live in the sea. 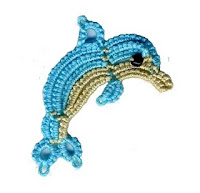 Wally has a present for everyone. It's your very own Time. 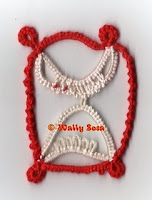 I do so enjoy visiting this page! It is such an inspiration to see the wonderful things that people tat! Love coming here!
Fox : )

Wally!!!!! You've solved the problem...just what we ALL need!

That is so cute..