Sue used a modified Tatted Flower Pin pattern in Easy Tatting by Rozella F. Linden to make earrings for her daughter. She missed a picot on the first one so she turned it into a necklace for her granddaughter who's almost 6. 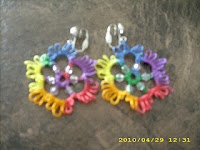 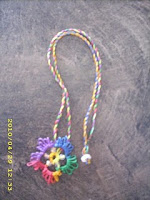 Tattips started with a simple pattern in mind using white thread and black beads, but after a few rings there was a problem and as she fixed it these utterly delightful 3D bell shaped earrings emerged. That's the kind of problem I like. 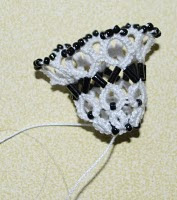 Agasunset has used silver thread and Swarovski crystals to make this familiar cross. The leaf is not one of her designs, but a necklace she bought from Jennifer aka "Snappytatter". 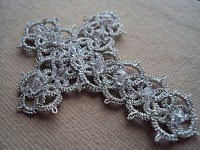 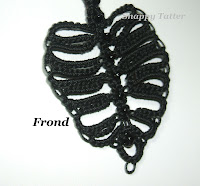 Alba Alicia has tatted for Ernesto and Marisol's wedding. The ring bearer's pillow is lovely with an edging that has been embellished with silver beads and heart motifs. 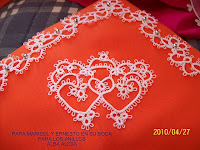 Heather posted a better picture of her Envoy medallion. 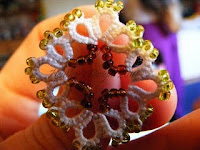 Krystle is back in the jewelery mode. The necklace and earrings incorporate vintage swarovski crystal pieces and roll tatting done with 2 shuttles so that the chains could intertwine. She has a flower on a chain, a petal perfect necklace with beads, and a new design called "Festival" earrings. Rose coloured rhinestones framed in black tatting and another earring design with shell drops.

Marty sent off the phone charms that Wendy won in her giveaway but they seemed to have gone astray in the mail, so Marty tatted these as replacements in Wendy's favourite red, Oren Bayan metallic threads actually, one with silver beads and one with red beads. Then of course there was that volcano that grounded all air service so it looked like first one, and then the other package, got lost... but never fear, they have arrived. Wendy got both packages eventually.
Posted by Sharon at 11:20 PM 1 comment:

Lily has been tatting while I've been too busy to do an update. Her first design is something she developed using the Linked Rings technique found in the Advanced Tatting Techniques on the Proboards Needle Tatting Forum. TotusMel's Cameo Tatted Earrings morphed into turtle earrings. Octopus earrings are her own original design. Doodling with her tatting needles produced simple little pink earrings. The delicate lace medallion needle tatted with size 10 mercerized crochet cotton in white using part of the pattern from the Handy Hands Newsletter, a reprint of the SEMCO Dainty Lace Doyley and is a gift for her grandmother. Umintsuru's dragonfly pattern was tatted using tatting needle #7, size 10 mercerized crochet cotton in avocado green, and a combination of swarovski, czech, hematite and glass beads and was intended to be earrings, but the beads made it too heavy to hold it's shape, so it's been attached to the pocket of her purse. 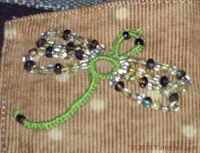 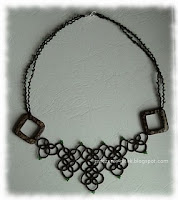 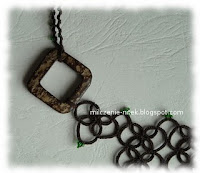 Corina shows us a self-published book called Needle with three shades of felt "leaves" to quickly find different types of needles. The tatted decorations are somewhat faded as the book has been carried to many different events.

Sue tatted my rainbow earrings but found them a little too big for her liking so she modified it to make it into a hair decoration which her daughter is modelling, so now she need to make one for herself. 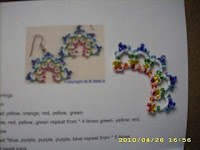 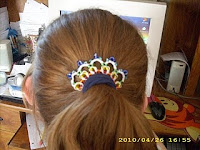 Agasunset remade an old design she usually makes as a pendant in large thread to use as a coaster. 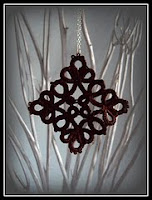 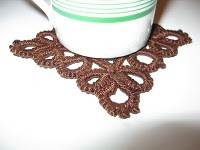 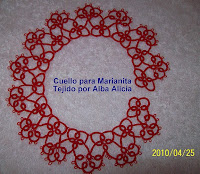 Wendy was the lucky recipient of the tatted charm that Marty designed. The first one looked like it had gotten lost, so Marty sent a second, but eventually both arrived. 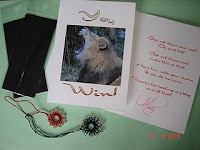 Vanessa's 25th motif is a wonderful necklace created by combining a large flower from Teiko Fujito's book Tatted Fashion and smaller flowers from Rebecca Jones' book The Complete Book of Tatting. It's finished off with a spiral chain. She's celebrating finishing her 25th motif with a giveaway. 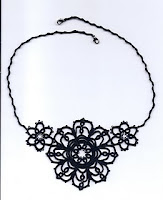 IsDihara attended a behind-the-scenes lace tour at the Smithsonian Institution's Museum of American History and saw some amazing laces including these tatted pieces.

After a forced hiatus Steph is finally tatting again, but she's not telling us what she's working on, just that it's German. The part of it that's showing looks kind of like a teapot. 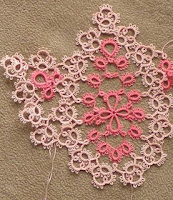 Vinnie has been at it again. First of all she has tatted a charming edging but she's not sure what to do with it and then she tatted a bracelet in light blue transparent seed beads on white thread, with a rolled on wire with beads for the toggle type lock.

Alan is in the hospital fighting off a staff infection and managing to tat around the IV tubes. This design is Yarnplayer's "Joyful Bell" done in silver which has a large floating pearl in the middle and smaller pearls on the edges. 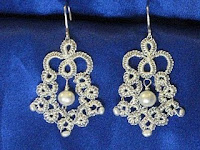 Diane has finished the Primrose Path doily from Mary Konior but it's not blocked yet. Diane was in hurry to use the new table her sweetie built for her to take the photograph and hasn't blocked it yet.

Fox has been trying to settle on a design for a birthday gift and she thinks she might have it. An edging with some deep rose beads and a charming little clover added to the teddy bear's paw really glams up a plain onesie. A simple motif was done just finish up the very last of Yarnplayer's Garden Afternoon thread and it makes a wonderful pendant. Tatskool's Daffodill Dill was used for the motif from "Motifs for Marie" by Kaye Judt. 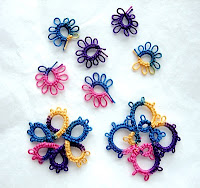 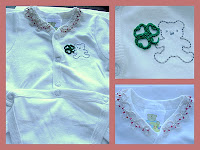 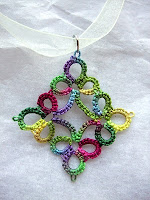 Heather tatted Mary Konior's bud fragment with a metallic thread. She has just begun the Spinning Wheel Glass Mat. Her butterfly design is done in her hand dyed metallic and her hand dyed bamboo thread. She's been experimenting with some new designs and thinking about turning some of her photograph images into cards. Her new Envoy design has been redone in lime green and brown beads. 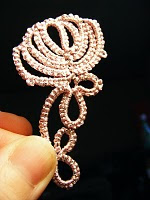 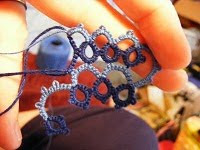 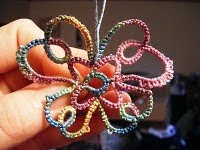 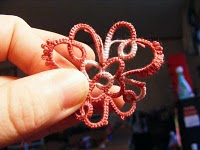 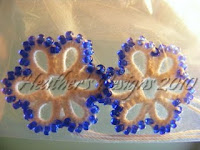 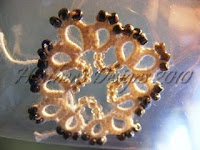 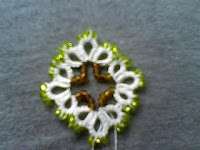 Krystle shows us the results of speed tatting a turtle at Shuttlebirds.

Marty's InTatters exchange partner has received her pendant. It was made with Oren Bayan silver thread and copious amounts of purple mini-seed beads. She also made a couple of Jane Eborall's Butterfly Bookmarks without the bookmark tails, and one tiny one with a tail for really tiny books!

Sherry shows us Gwen's Angel tatted in size 20 Sunset Clouds HDT which she taught at the Shuttlebird's event and she is now offering the pattern on her blog. 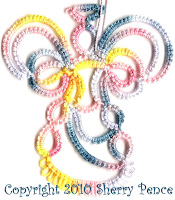 Posted by Sharon at 1:58 PM No comments: