Stacy has decided to join the challenge and has begun with Kersti's Floral Bookmark done in Yarnplayer's "Sugar Maple" HDT size 30. One isn't enough so she did another in crochet thread. Jane in South Africa's modified bookmark was done with DMC perle cotton #4065, variations "Morning Meadows". Then a bookmark she devised herself and another of the Jane from South Africa bookmarks done in Yarnplayer's "Sugar Maple" HDT.

Ginny shares some pictures of the Fringe Element's Canadian tatting get together with some interesting tatting. 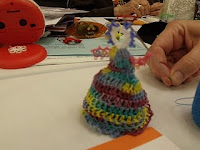 Heather is continuing her tatting tutorials.

Justyna design these flowers inspired by something she saw on Fox's blog. Then she did an earring and pendant set in her own HDT using a Teri Dusenbury pattern. Then some lovely roses and hearts and a bookmark. 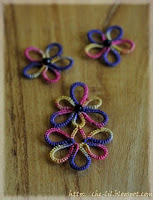 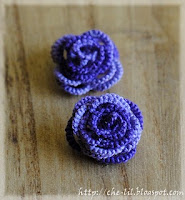 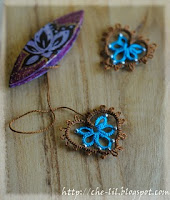 Marta started out to do a bookmark, based on Snowflake by Susanne Schwenke but it just grew. She worked with Aridne thread and it's working into a doily. 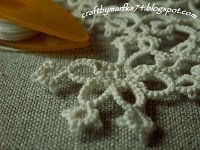 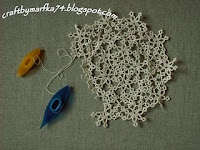 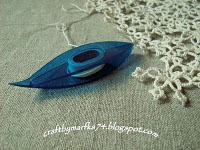 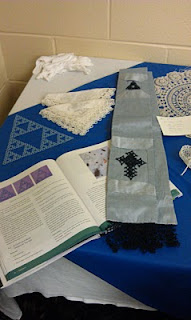 Diane has just finished one large project and has decided to start another. Some years ago Kersti posted a picture of a large tin with a picture of a doily printed on it and challenged people to tat the doily. 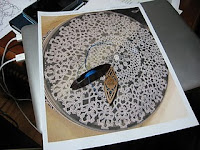 Gina was making progress on the Chinese Coin bookmark, but got distracted watching TV and kept having to retro tat. Finally she completed it adding a chain look to hang a tassel. She used size 30 Cebelia but might do it again in size 20 in a brighter colour. 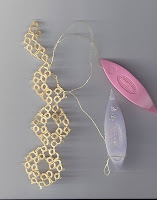 Isa received a pattern by Ros-Marié Andersson at the last tatting meeting along with size 20 HDT and the crystal angel which Ros-Marié also supplied.
﻿﻿ 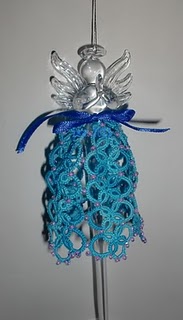 ﻿﻿ Orsi has some flowers done that will be used on a neck warmer. The edging is growing longer and longer. 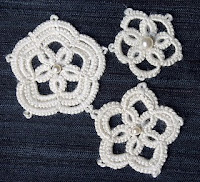 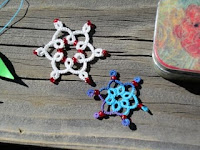 Posted by Sharon at 8:20 PM No comments: 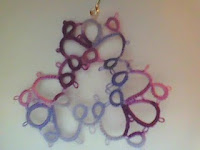 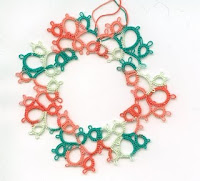 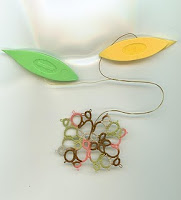 Anika ordered another tatting needle, but it turned out to be the same size as the one she already has and didn't look as nice as she wanted to working with size 10 thread, so she switched to working with yarn and this piece is already nearly a foot across. 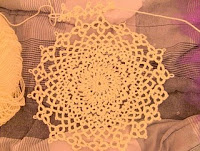 Prabhjyotsaini is still enthralled with hearts. The first one is easy heart pattern by Ruth Perry and the second one is K heart by K Boniface. 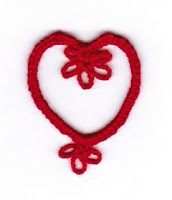 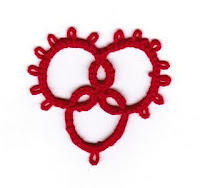 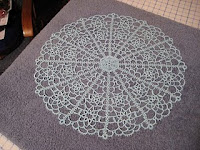 Fox is trying to make her stitches small, tight and neat. The bookmark modified by Jane in South Africa is tatted in Coral Rose HDT #20, by LadyShuttleMaker. Then the last one was Rosemary Peel's Jessie pattern with very dark cobalt beads that she decided would enhance the black thread an also incorporates some of the fancy metallic thread Suneeti sent her. She was trying to emulate the stitching of Tatting Fool when she did this Karey Solomon's leaf pattern in Karey's HDT. 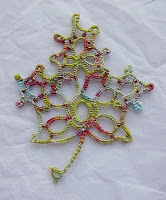 Posted by Sharon at 8:50 PM No comments:

Axa found this Iris Niebach design but the needed a translation for the pattern It's done in size 20 Anchor Artiste thread. 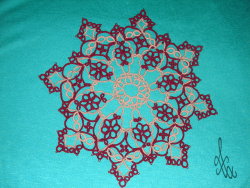 Prabhjyotsaini's friend saw the doodle angel pattern by Birgit and wanted one for all the ladies who will be attending her sister-in-law's baby shower. Then she did it with beads, but her friend wanted them all in pink thread without the beads. Here are all the angels mounted on pins for the ladies to wear. 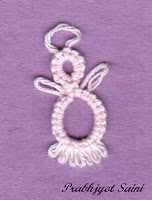 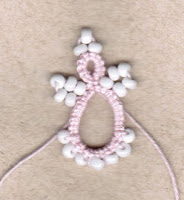 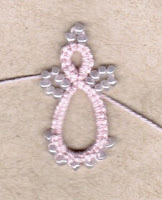 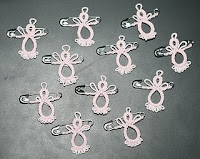 Marta was challenged to try tatting in string. It worked for this bookmark, but not well and now she is on the hunt for string that is more suitable.

Diane and Denise got together to help set a record with Palmetto Tat Days for the most tatters tatting the same pattern at the same time. 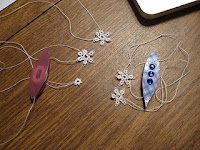 Fox received a fantastic thread sample from Umintsuru and used it in this pattern from the vintage D.M.C. book where she changed the small top rings to Josephine Knots. This of course ends another round of the 25 Motif Challenge for Fox and she's ready to go again. 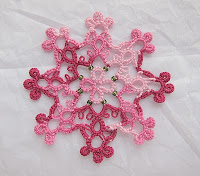 Sue joined in the Guinness Book of World Records for the most people tatting the same pattern at one time. 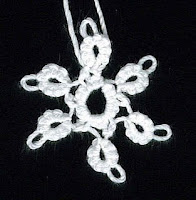 Posted by Sharon at 8:00 PM No comments:

Joy and her friend collaborated on a shabby-chic form that combines tatting with antique buttons.

Fox has another hostess gift bookmark ready. The pattern is Ladytat's, and the thread is Tatskool's.

Gina made a second attempt at Jon's Chinese Coin bookmark and is ready to make the turn and start up the other side, but that can wait for another day.

Lily finished the Napoleon triangle motif in Hakelgarn size 10 Midnight Blue with turquoise seed beads, jump ring & 3 round, crystal beads. Then the "Delicate Tatted Doily" from a Workbasket magazine done in size 10 thread when it should have been size 30, got to be elephantine by the third round, so she truncated it and converted it into a pin. 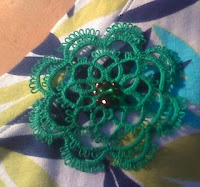