Lots of Tatting and New Designs

Alan has been busy getting ready for a craft sale and has tatted a set of earrings and pendant and for motif #25.

Tattingchic has received the Marie Antoinette award for more details please go to her blog.

Nita tatted a design by Linda Davies for her 25th motif and has completed the challenge. She is going to take a break for the holidays then start the challenge again.

Ellen has tatted two heart bookmarks of her own design to use up thread she had left on shuttles. She is not sure she likes them but I think it was a great use of thread.

Aileen breaks in her new sewing machine by making a couple bags with many pockets. Perfect for carrying tatting. She also shows a picture of a butterfly that she tatted.

Barbara has tatted a bow and leaves us guessing as to what it is going to become. This is her 15th motif.

Eliz has tatted #4&5 motifs for the challenge but did not have time to post pictures.
Anne is practicing the tatting technique known as encapsulation.

Well Connie has been very busy and has a blog posting that is full of tatting and other crafts. I suggest you have a look as there is a lot to see.

Diane has tatted the last snowflake from A Veritable Tatted Blizzard in YarnPlayers Summer Trail HDT.
Gina has focused her blog on positive thinking and also shows a small bag she made and a bit of tatting.
Jon shows us the poppy she designed for the Palmetto Tatters fund raiser.
Laura shows us the Royal Diadom doily designed by Sherry Spence that she tatted.
Marilee is getting ready for the Discovery World Artisans and Entrepreneurs Holiday Market.
Sharon tells her take on designing and the trials and tribulations that go along with it.

Ancolie is our newest participant and she has just finished her first entry, a lovely doily done in blue and white in size 80 DMC. 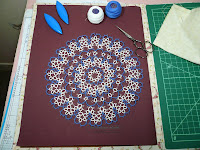 Wanda made this doily with size 30 DMC Cebelia in Ecru. Se spent a day making the 7 inside motifs and 3 days and 4 false starts trying to figure out what to do with the outside. Who said designing was easy? 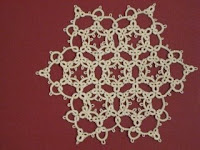 Heather tatted a snowflake by Michael Meloy in HDT made by her kids called Sha-Na. 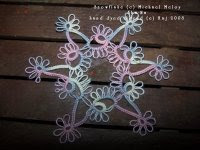 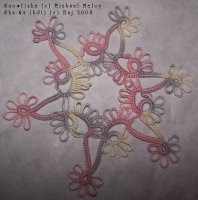 Aileen bought one of those retractable zippie things and decorated it with purple felt, rose ribbon and her favourite motif from Patti Duff's Mini Tats in size 80 DMC. 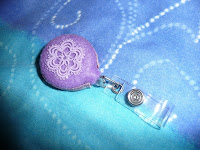 Shay has four more motifs for the challenge. All except Edda's Violette are the same basic 3-3-3-3 rings and 3-3-3 chains. The wreath is a strip of edging joined to make a circle, and the red bookmark is the same edging joined mirror image. Shay has been asked to teach a needle tatting class at a local shop and Edda has given permission to use her pattern. 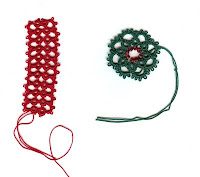 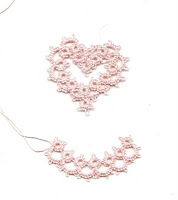 Mrs John and her sister in laws all have cheap Walmart straw hats that they are embellishing. Her hat will have at least 3 tatting pieces, but here are the first 2. Motif 11 is the needle tatted medallion on the crown made with Manuela size 20 thread and the pattern is Round #5 from the 'Ultimate Book of Tatted Doilies' by Annie's Attic.Mrs John has made it larger by adding a row of ring and chain to the outer edge. The edging on the brim looks like the one she was working on the other day while herding cattle. 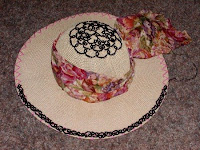 Wendy was working on this delicate row of rings when her clover shuttle broke in two, right through the post. Bummer! Look at all the thread wound on it still. Too bad it couldn't wait until the shuttle was almost empty. 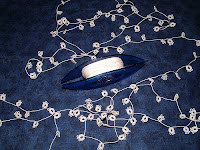 Bev has been persevering with split chains. Jon's demos and Jane's pictures have been a valuable source of information. After the discipline of split chains, the freedom of "free tatting" has been fun. These floral sprays are done in size 12 Valdani Perle cotton in fall colours. 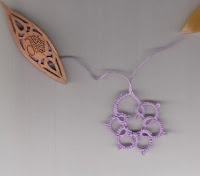 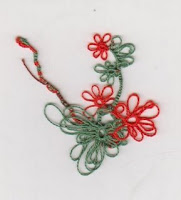 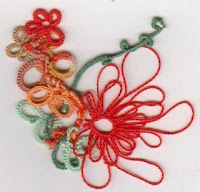 Joy has tatted another little ornament. Her daughter thinks she tats too much. Tell her there's no such thing as too much tatting. 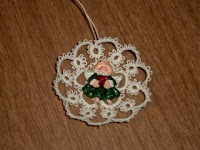 Jeff has been fascinated with Teri Dusenbury's turtles so he thought he'd try the pattern for himself. Teri recommends smaller stone disks but Jeff would like to adjust the pattern to make larger pieces. He's hoping to make some more masculine jewellery in tatting. The naked turtle, or the one without the stone in it yet, he did with a thread that's about a size 50. The snowflake is "The Eighteenth Day of Christmas" by Lene Bjørn from her book "24 Snowflakes in Tatting". Jeff used DMC Cordonnet size 50 thread and Guttermann Metallic thread. It makes a pretty snowflake with a bit of sparkle. Finally there is the finished turtle which Jeff used a floss threader rather than a needle to do the beading and it worked pretty well. The results are beautiful and maybe next time he'll do it in HDT. 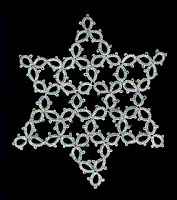 Martha shows some more of the tatting pieces she has received. The butterfly was given by Sherry Townsend and it's from Tatted Animals by Inga Madsen. The bag was given to the teachers at the Palmetto's gathering and it is adorned with the Regal Heart from Tatting Hearts by Teri Dusenbury. 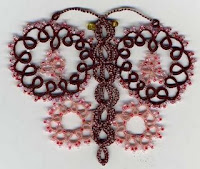 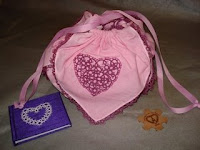 Carol's "Jingle Santa" is adorable, if you haven't seen it yet, go check it out.
Diane has added "Frosted Flower Snowflake", "Daisy Chain Snowflake" , "Feathered Star Snowflake" from A Veritable Tatted Blizzard by Samantha Melnychuk in an assortment of HDT to her collection.
Gina is tatting gifts for her blog visitors, she's looking for the 150,000th visitor.
Jon has added a tutorial for how to avoid the twisted join.
Laura has tatted Ruth's celtic snowflake in Rhubarb Pie HDT.
Marilee's article has been printed in Belle Armoire. Congratulations!
Pamela shows snowflakes in her Rainbow Bright HDT thread and leprechauns.
Sherry has made tatting kits for her students. She has made a fresh batch of Raspberry Mousse, Peach Pandorea, and Marina which have become permanent colourways but the pottery shuttles she tried to make were a failed experiment.
Snowy put her back out while visiting the UK. When she got home she fell smashing her glasses and injured her wrist and knees. Ouch. No tatting for a while.
Posted by Sharon at 8:36 AM No comments:

Heather shows us a bird that she designed for her upcoming book and its one for the designs in her new book which isn't quite finished Ornament Tatting 2 with bells.

Ellen's tatting group got together and they had a good time. They tatted Ellen's' Christmas Tree and then had a special treat a cake decorated with tatting.

Aileen was at the gathering with Ellen and shows the tree that she tatted. She also tatted a pair of YarnPlayers Elegance earrings for a gift.

Bonnie tatted two bookmarks and is counting them as #16 of the 25 motif challenge.

Anne is taking part in the online class and expanded on the theme of the
of the classic tatted wheel by making other shapes.

Joy continues her snowstorm with snowflake #47

Diane is adding to her snow flake collection.
Gina got together with her guild and made a pretty candy cane. She is also expecting visitor 150,000 to her blog next week.
Marty has been busy tatting Christmas gifts and shows two decorations she made.
Pamela has tatted Milky Way Snowflake in Rainbow Bright HDT and different combinations.
Posted by Unknown at 6:19 AM No comments:

TattingChic has been exchanging gifts with Laura and she shows us the lovely thread winders that Laura sent her. Here's a sample of them. 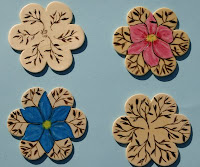 Aileen has set herself a new challenge to tat patterns she hasn't tried before because they were "scary" Motif #1 is Jane Eborall's 2005 Butterfly with overlapping wings done in variegated red size 20 Omega with 11/0 seed beads. 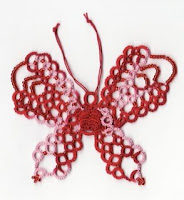 Barbara is working from Rosemarie Peel's book, 20 Tatted Motifs to make a picture the Fern was tatted in Olympus size 40. The Ivy way made with the same thread. 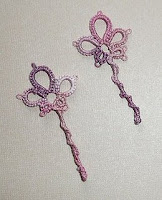 Mrs John has been working outside on the ranch looking forward to the laid back winter pace where she could sit cozily inside and tat. Except if she wants to finish before the end of the year she'll need to do 15 motifs in 44 days, so here is the first piece being worked on while herding cattle in a pickup truck. Shall we let her tat fast and furious to make the deadline, or tell her now that she's the only one keeping track? 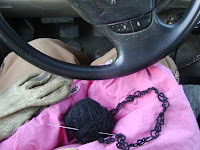 Diane is tatting herself a blizzard of snowflakes using A Veritable Tatted Blizzard by Samantha Melnychuk and an assortment of HDT form Marilee and Sherry.
Gina's been having fun doing Ellen's Tree bookmark.
Laura is displaying the lovely snowflakes sent to her by TattingChic. She has also posted Ruth Perry's Celtic snowflake done in size 20 Flora. She had to give it a try after Clyde sent her one done in HDT.
Mark has posted a picture of the floral tatting spray for his niece's wedding gown. If you haven't seen it yet, go look. It's amazing.
Marty has tatted some ornaments all in white for a friend's birthday. The friend loves them but Marty thinks they need some colour. Me too!
I posted a tutorial on how to add in new thread.
Sherry has some new shuttles in her Etsy shop.
Posted by Sharon at 11:32 PM No comments:

New things for the Season

Heather's going through a tough time - no thread to dye! Our thoughts are with you...

Joy's seeing lotsa snow - 2 to 4 inches in expected! Inspired, she shows us a flake the Snowgoose website done in size 20 Hakelgarn thread. 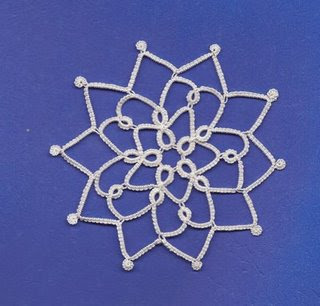 Diane's done up snowflake #4 for her tree. It's a rocking snowflake (pun intended) done in 20 Jimi Hendrix. It's "Kaleidoscope" from A Veritable Tatted Blizzard by Samantha Melnychuk.

Marilee's done up a new batch of tigerseye for anyone who would like to get some. She also shows off the very impressive work done by her tatting student. She also shows us her new pattern entitled "toccata".

Sherry's done up a new batch of Tuscancy. Her new pattern, Royal Diadem is also available at her etsy store. Congratulations!
Posted by rainbows and raindrops at 6:35 AM No comments: