Bree is another new challenge participant that taught herself how to both needle and shuttle tat and her first entries are some simple bookmarks that she designed using size 20 Lizbeth thread. These are a variety of simple rounds with tails and dimpled rings or clovers to hang out of the book. 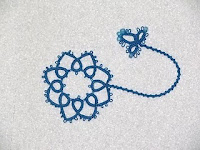 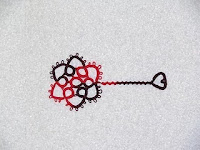 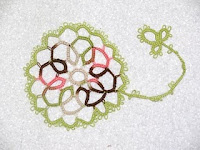 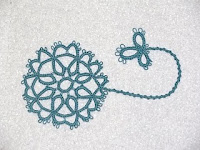 Jennie used "bamboo spun - natural bamboo yarn" in sea blue to make a headband, but she thinks it might need a ribbon backing for stabilization. 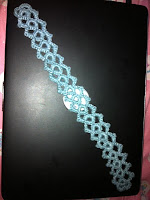 Gwen used Jon's pattern to make 2 dragonflies with Lizbeth size 20 Springtime and another in Falling Leaves to make a third dragonfly. The dragonflies and a couple of butterflies were then used to decorate some cards. 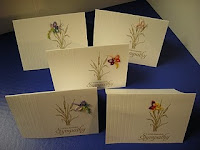 BSOTF has been playing around with tatting different things like the leather and elastic shown here. 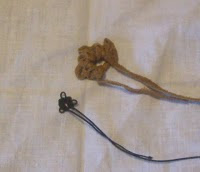 Ann tatted a motif from Patti Duff's Mini Tats with one little blip, so she thinks she'll have to do another. 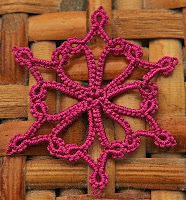 Wanda doesn't often work with beads because she doesn't find them very portable, but she had an idea for a beaded butterfly that she had to try out. It's worked in Lizbeth size 20, black for the body and Caribbean for the wings, with 10/0 seed beads. 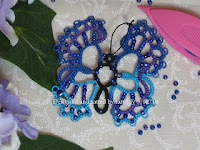 Ancolie did a little work on the regularity of the stitches with a thick thread using an old insertion lace pattern.

Diane is tatting more shuttle shapes for epoxy shuttles. She tried adding a picot to each end of Stumpy to give it more of a point in Altin Basak size 50, color #3005, but it was only moderately successful. Then she tatted Anne Bruvold's pattern designed for the purpose in Lizbeth size 20 colors #661 and #660. 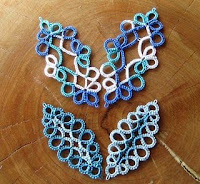 Fox tatted The Amusement Doily by Celtess using some variegated thread that Heather sent her. It looks lovely, but she ran out of the variegated thread and had to improvise. She discovered in doing it, that round shapes with the concentric circle designs do not please her. 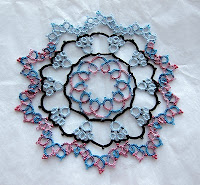 Kelly has just been asked to substitute for one of the Fringe Element teachers who was in a car accident and won't be able to teach. She is both apprehensive and thrilled at the proposition and has assembled an assortment or easier pieces for beginners to tackle.

Martha has posted some pictures from the Palmetto's get together where there was lots of lovely laces to look at. She has been tatting some things with the threads from the Thread Exchange and finds that bookmarks like this Mary Konior's Duet pattern are a good choice for the length of thread. She also used an exchange thread, maybe Lizbeth 691 Mocha Brown Medium? to perfect her koala bear pattern.

Mica tatted Day 20 from Bjørn's 24 Snowflakes in Tatting and finds she is getting more comfortable with split chains although the mock rings are visible because she didn't want to pull the metallic thread too hard and break it. Maybe the trick with this is to tat the whole thing looser so that you can pull hard and not damage the thread. 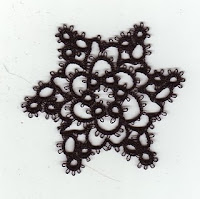 Hi, Sharon,
Love the course so far. Have learned a lot so far!

Sign me up for another 25 here, please. Whew! I have been productive!

So many beautiful things to see here! Does it really say at the first pictures that a new tatter designed those bookmarks??? Boy do I feel inadequate, lol!)