Kkommy finished her second Easy Rounds Coaster in Lizbeth Royal Wave 143 and Golden Yellow Medium 613 size 20. Now she's challenging herself to make a big doily, the Purple and Teal Square Doily by Debbie Arnold that she plans to make using 4 or 5 colours. 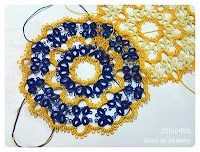 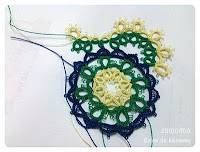 Magda is preparing for a large show in the capitol and these earrings are made of maroon Madeira size 20 and white, slightly iridescent beads to match the necklace Daisies. Clips were made with white and silver Altin Basak size 50 and beads in a silver colour and they match the Viennese Waltz bracelet. Roses are earrings made with cream Aida size 20 and creamy, slightly iridescent beads. The bracelet matches the Forget earrings and is made from white Aida size 20 with glass faceted beads and a silver clasp. 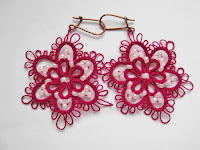 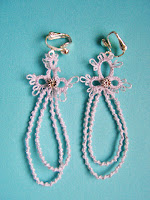 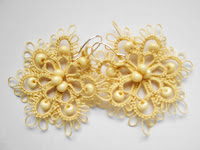 Orsi needle tatted a simple bracelet in a wavy shape and realized it would look good with 2 back to back so she did another to make a curtain tie back.

Sue needed a break from tiny heart paperclips and she has started a doily in Lizbeth White and Tropical Punch size 40. An ornament made with a tatted rosette and a small square using a pattern from the antique pattern library. She had to use a larger ornament since the tatting was too slack on the first ornament, but tatting the last section on the larger ornament was quite a challenge. 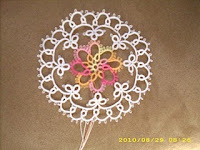 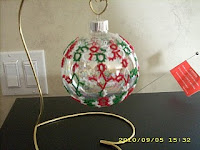 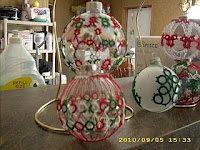 Cindy entered her doily, that won a blue ribbon at the county fair into the state fair and came away with a red ribbon. Tatting was well represented with doilies, ornaments, hankys, earrings and a very stunning dinner cloth. 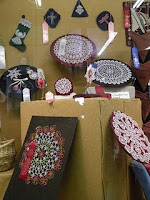 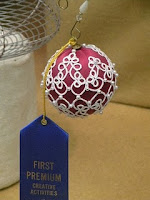 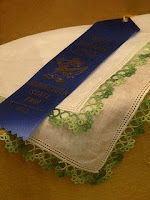 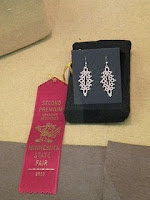 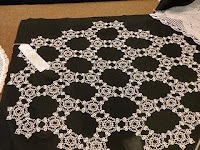 Bonnie doesn't have a lot of time to tat, so rather than show the finished project she's showing it in stages and wondering if we can guess what it is. The first part seems vaguely familiar, but I can't place where I've seen it before.

Aileen has been crafting, but not tatting much. All she managed to do was Heather's Pawprint. 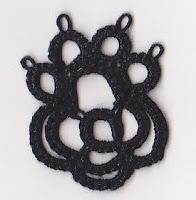 Fox sat down in a neighborhood cafe and decided to just tat and see how much she could accomplish during her sojourn. It looks pretty impressive, doesn't it. The section she did earlier has been adorned with a wee butterfly found hiding amongst the buttons at work. The Oval Rose from Marvellous Motifs was tatted in 2 colours and a modicum of beads and is being sent to her daughter for her birthday. Fox thought she had forgotten how to tat a single shuttle split ring, but with a refresher look at Anne's video, she was off and tatting. 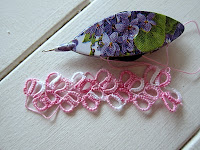 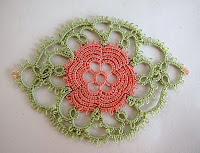 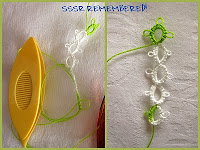 Krystle just finished a lovely necklace with pretty crystal beads and just as she finished it she realized on of the beads was broken. That's either discouraging news, or great news, because now she gets to keep it.

Nami finished the challenge one and decided to start again with these green eye earrings. 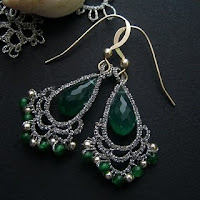 Vanessa's favourite bookmark is the Flowery Bookmark created by Jane Eborall and tatted in Altin Basak 50. She likes it so much that she has started another one.

This blog is really an inspiration.