Yvonne is trying to expand her tatting skills and has joined the challenge. She is a traditional tatter making motifs like this one from Mini Tats but this might get her to push her limits a little. 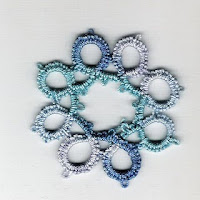 Ingrid is more accustomed to using solid colour threads but seeing what others have done prompted her to try out some multicoloured jeans thread that she had in her sewing box on Mary Konior's Convolvulus, but then she ran out of thread. 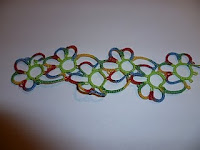 Corina tatted Marilee's Elegance in Lizbeth 20, col 138 but the SCMR didn't work as she wanted it to, so she thinks she'll re-do it in another thread and use this thread for a different project.

IsDihara has been trying to tat a Valiere Square but it kept cupping and after repeated attempts she finally put the pattern and the tatted sqare side by side and noticed that she had only joined the round of chains to half of the connection points. 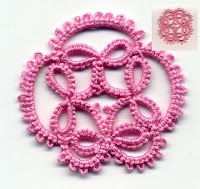 Wanda used Lizbeth Caribbean and black size 20 to make this bookmark which is a variation on the previous one. 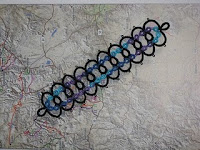 Kelly had a great time teaching at the Fringe Element event and by all reports it was a great success. 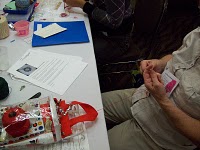 It seems everyone today was experimenting- someday I will have the gumption to try that without staying locked to a printed pattern!