Bree tatted a rosette from the Thérèse De Dillmont book, but as she was having trouble with the directions she wrote them out so that she could understand them. This edging didn't have a corner and she improvised one that she isn't satisfied with, so she'll tweak it a little before she uses it. She has mounted her tatting for the challenge and framed it. She plans on doing 3 frames. It's a nice way to show off your fibre art. 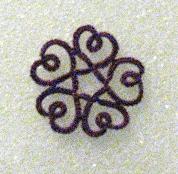 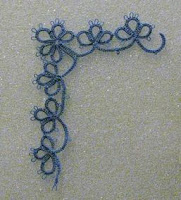 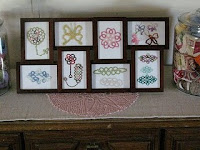 Hattalahutta has been using buttons in her tatting. The first piece is a button cross Maxi size 10, but she lost the link to the pattern. Then she tried a square motif, but ran out of thread and turned it into a triangular pendant. Then she finished square in black and she thinks she might write out the patterns for both the triangle and the square. Karey Solomon's Buttonwood Tree is sporting an extra leaf and was made with brown DMC perle cotton (?) and green Opera. 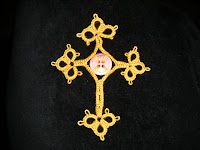 Kkommy was on to the 10th round of her doily and had to cut it back because of a mistake on the 9th row. We feel your pain. 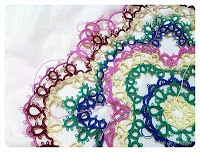 Lily tatted the Old Tulip by Linda S. Davies, but had to wait for better lighting to take the picture. She could only fine white stamens which don't stand out well against white thread. 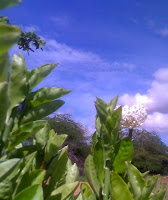 Everything looks beautiful but I MUST admit my favorite picture today is the one of the BRILLIANT idea to shadowbox/collage the various motifs. LOVE it!!!