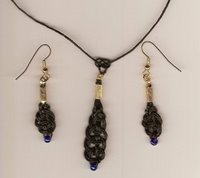 I blinked, and look what Ruth has posted. The letters R, H, V, W, and Celtic daggers jewelry. She announced the completion of her 25 motives and the imminent availability of the Celtic patterns at the end of August, and I didn't think she would be showing us any more pictures, just to keep us in suspense, but apparently I was wrong. I must remember not to blink any more :-) 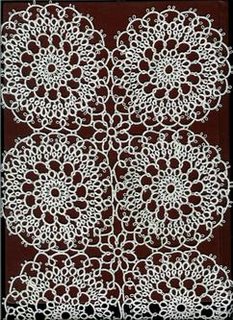 Lynda has made some more small crosses that she will forward on to Tami.
Clyde now has 13 large and 9 small motives completed for his tablecloth and he has posted a picture showing what it looks like with three rows done. Seeing the small motives sandwiched between the large ones gives a better idea of how the tablecloth will look. It will be a spectacular piece of work. It takes so much discipline to tat the same motif over and over again often enough to make a tablecloth. The first few motives require concentration as you figure out the pattern, but after a while it can get boring and for that reason it's harder to tat something as large as this. Row after row, motif after motif, it's easy to lose you place and make a 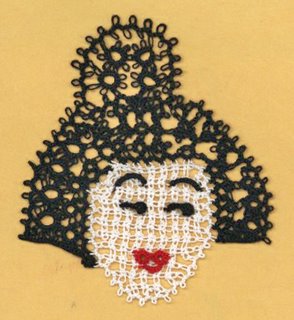 mistake. I find that when I take on a large project like this. I break it down into smaller shapes so that if the finished object was going to be 4 feet by 3 feet I might make smaller units 1 x 2. Then if I get bored, run out of thread or have some other reason to quit I have a usable product whereas an object 4 x 1 is less practical.
Mark's geisha now has a face. If you haven't been following the progress of the geisha, go back to the September 6th posting of the sketch Mark is working from. I don't think she's going to qualify as a motif. She looks more like a unique creation.
Posted by Sharon at 10:05 PM