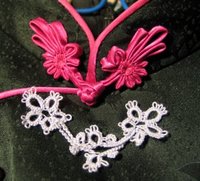 Gail has been working on the TAT 2 button sampler, wishing that all those years ago her grandmother had taught her right handed. Most of the time it doesn't matter, but as Gail has discovered, every once in a while, tatting right handed is easier. I usually encourage left handed students to try right handed tatting, just so that on those odd occasions where it does matter, they don't have to go through mental gymnastics to achieve the desired results. Mark has been busy. His geisha has hair and he has also done a leaf that can be utilized with flowers, as necklace or earrings or joined together to make larger items. EeKoon, having learned to tat 3 whole weeks ago has made a remarkable little motif she named Ribbit. It's a take off on a frog closure and incorporates Josephine knots. Nothing like trying a new technique like JK and designing your first piece of tatting all at once. Don't you love beginners who jump in with enthusiasm.? She has also posted her third motif.
Posted by Sharon at 7:42 PM