Check out all the new additions today! 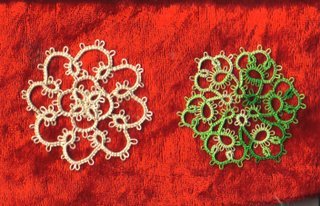 Wally posts a motif called "June Flower" that will be part of a book called "Quickie Tat" that she'll publish later. There's a green snowflake on Ruth's page. Green was all that she had so this snowflake looks like it's Irish roots are showing. Janet has created a Light and Dainty snowflake and posted the pattern. Jan found a Photo Keeper at Wal-Mart that's just perfect for displaying her motives and she's begun mounting them. What a neat idea! Clyde is making progress on his tablecloth and has posted a section showing both large and small motives. He has 10 large and 9 small motives done. If it gets to the planned size it will have 150 large motives and 126 small motives. My thumbs are aching just thinking about it. I bet it will be gorgeous. Riet has posted another daisy picot motif, this is a double sided star in blue and white. It's such an interesting effect. Lori has posted another one round 6 inch motif that she has designed. I have a hard time designing a one round motif that's 3 inches across and Lori has just completed two 6 inch motives. Wow! Snowy has posted 2 more motives and add information on where the patterns come from. She's using such 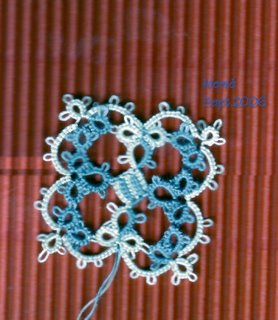 wonderful colours for her motives. Meme joins the challenge from Chile and she has posted a motif with a block tatting centre. Meme has lots of other tatting to explore on her blog.

While the pictures on the blogs are beautiful to see, sometimes it's nice to know what's written. Click HERE to go to the Babelfish site for translation. Tatting uses specific words that aren't translated, but you can usually figure out what it means.

Don't forget to leave comments on blogs or e-mail people to let them know you are looking at their tatting. Part of the fun of this challenge is telling people your thoughts about their tatting and their designing. 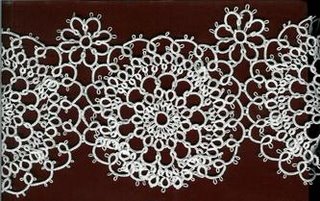