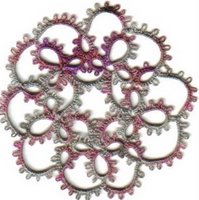 Janet has a 3rd version of her daisy, more like the effect she wants. Lynda has posted a small tatted cross. In the wake of 9/11 several tatters have made small crosses, hearts or angels to be distributed to the families of people who have lost loved ones. One proud Mom collected angels to be sent to her son in the military so that he could give them to the soldiers he provided medical care for. Tatters are immensely caring people. In spite of al 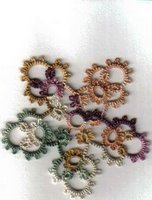 l her difficulties with the break-in and getting things replaced, Riet still managed to create a marvellous little daisy picot butterfly. Snowy has posted her 5th motif using some lovely hand dyed thread. Hand dyed threads can have closer colour repeats which look lovely in tatting. The colouration of the thread appears to be similar to the Valdani perle cotton thread that Donna used on her cross and star which isn't all that surprising since the Valdani is also a hand dyed thread. Colours on screen can be deceiving and others may not see any simillarity.
Posted by Sharon at 7:50 PM