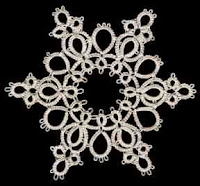 You will have noticed that the postings have become less frequent. That's because with nearly 50 tatters joined in the challenge it gets harder to keep up with everything, especially when the various servers are really slow. Some of the people who wished to participate have yet to post their first piece and others due to work, family, and health problems have not posted anything for months. To save time, I'm going to stop checking those blogs until the folks are back to tatting and posting. 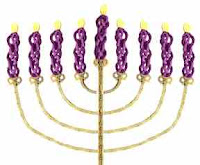 Ruth shows us her favourite one round snowflake which works equally well as a doll house doily. A hanging cluny gives light to the celtic letter "I" to create this awesome menorah. We know this one is a bit of a cheat having been created graphically from the first candle, but it can be done in thread, it will just take longer. By the way, for those of you that don't know Rozella Linden is Ruth's pen name.

Mark posts a picture of the surprise package Wally sent him of lovely threads he can't get in the States. 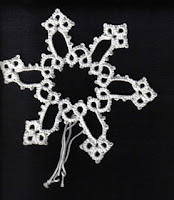 Donna wanted to tat a really big snowflake with beads and then stiffen it to hang in her window. She used Patons Grace thread and the snowflake came out 5 inches across which is a nice size, but the thread is too soft to hold it's shape especially with beads added. Maybe it would be easier to needle tat. I wonder if a solution of white glue and water would stiffen it enough to hold it's shape? 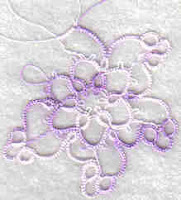 Marilee re-did the Chill snowflake in variegated thread and notes that it's wobbly until it's blocked. 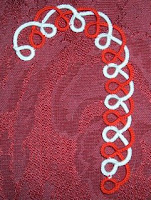 Laura has tatted one of Ruth's simple celtic cross patterns from the net in a variegated thread. Laura has also tatted Julie Patterson's candy cane pattern, another celtic-like design. 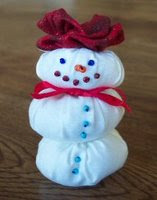 LaRae shares a picture of Mrs Yolanda Snowman. No tatting, but really cute. By the way, I missed posting about some of the pictures of past Christmas trees decorated in lace. Check them out, they're all stunningly beautiful. I especially like the angel done in mignonette tatting. 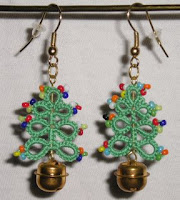 Finally Sue Hanson joins the challenge. Sue reminds us often that she doesn't do big, so we can look for lots of little motives showing up on her blog. She begins the challenge with some beaded Christmas tree earrings complete with what looks like a jingle bell pot for the tree to stand in.
Posted by Sharon at 7:53 AM

Sharon, you are doing an amazing job, do you have to check each blog?
On the Live journal account I have a friends page where I can see new posts...as they are posted.
Anyway, don't give up, because I'm sure I'm not the only one to gain inspiration and ideas on a daily basis. Thank you.