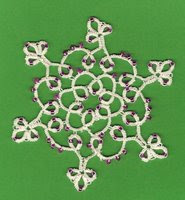 Arlene has been tatting more snowflakes and prolonging the tatting so she can enjoy it for longer.

Clyde has been tatting more of Rebecca's crosses, in between walking the new puppy and making rum balls for his kids.
Mark is still trying to recover data from his hard drive crash. What a devastating thing to happen. We don't realize how much we have come to rely on these old circuit boards and memory chips; until they don't work. 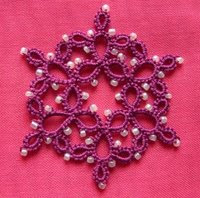 Jon has posted the picture for a beaded snowflake and shares the pattern for it with us.

Riet has posted 2 lovely snowflakes done in metallic thread and like all of us she's been tatting, tatting and tatting. 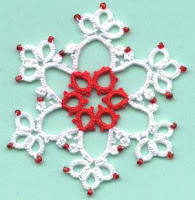 Sharon has posted a snowflake that's in her newsletter. 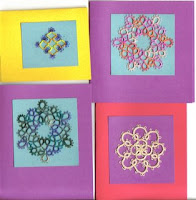 Snowy is showing us all of the lovely motives she made mounted on cards to be used as Christmas greetings. Christmas cards aren't as popular in France so Snowy has used colourful recycled paper to mount her tatting. It does look different with the different backgrounds.

EeKoon has done a review of her crafts for 2006. 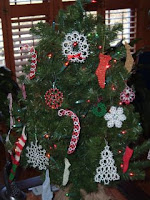 Laura shares a picture of her tree covered with tatting. It's so beautiful I want one of my own. 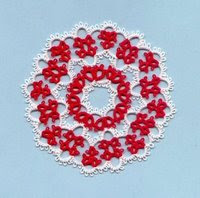 LaRae shares a picture of her peppermint doily. It looks good enough to eat. 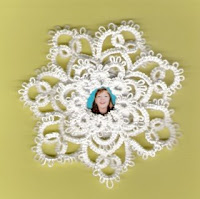 Dawn has re-done the candle in 3 colours so that she could have a yellow flame. She has also added a 3D snowflake with her daughter's picture in it.