Vera went with a white ball and red tatting on this ornament just for a change. She first tried out the tatting and then formed it around the ornament. Red lace of white to go with the white lace on red ornaments she has already done. 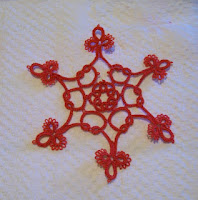 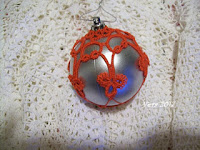 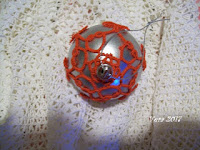 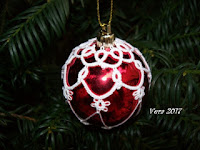 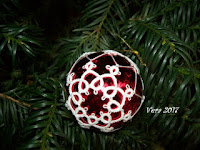 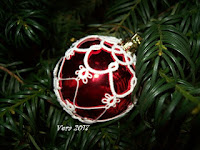 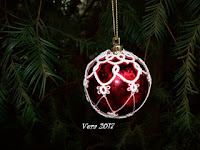 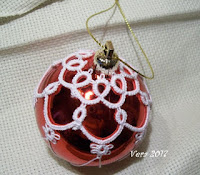 Melanie created a snowman for an ornament exchange worked in size 10 crochet thread with size 6 and 10 beads and in a few weeks time if anyone is interested she might be persuaded to put the pattern in writing.

Cindy received these snowflakes in an exchange at the Twin Cities Tatters December gathering. 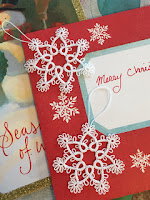 Diane has managed to tat a simple  Ice Drop while subbing. This Bloomin' Ice Drop was finally finished off. 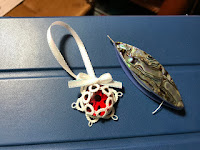 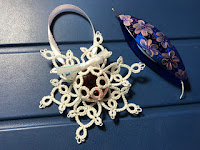 Marie tatsmithed around coral to make these earrings. Another pair done in purple. This Ice Blue snowflake was designed in 2010 and Marie has now provided the pattern for it. 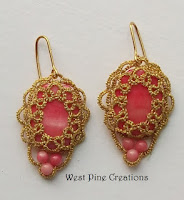 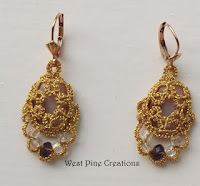 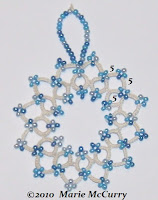 Martha has another quilt square for next year's Palmetto fundraiser and the orange dragonfly in the centre stripe is from Karey Solomon's "Flutter Home" with a little shorted tail and picots instead of beads. The purple dragonfly is from Patricia Rizzo's "The Gentle Art of Tatting Things We Love." The blue one is Sharren Morgan's Flag-Tailed Dragonfly" from the Palmetto 2010 pattern CD. While the blue and purple one is sort of a mash-up of those two patterns. 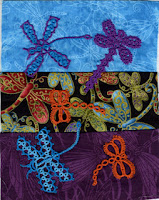 Muskaan shows the next round on her doily. Her next foray is into multi-colour Cluny tatting. 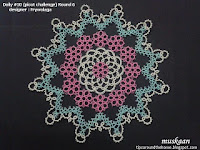 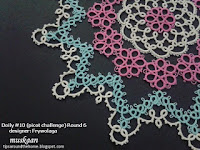 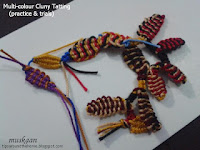 Sue is still addicted to Ice Drops, like this Birthday Ice Drop with size 20 Lizbeth Snow White and red and gold beads. Another one was completed in red and green. She also did a pair of her original Ice Drop earrings. 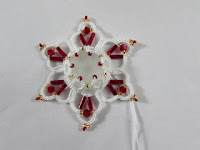 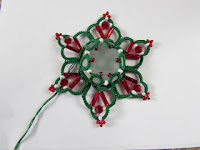 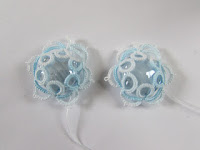 Wanda was travelling to visit family and found this Tatted star on display at the hostess station in the restaurant they were eating in which was tatted by the manager's mother.