Jane tatted motifs 53 to 57. Motif 54 involves self closing mock rings, but the others all have double picots. Motifs 58 to 61 are from part 5 of the Tatted Artistry of Teiko Fujito, which are inspired by nature and all of these involve twisted picots, which she's already got the hang of. 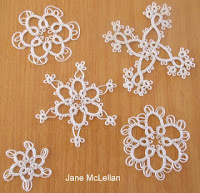 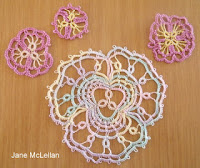 Melanie thinks she's got a solid idea for the bell cover, but she may add a row of rings in the centre. 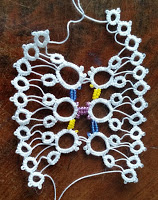 Diane didn't get much tatting done as her time was taken up giving sewing lessons to three little girls. She finished her Spinning Wheel glass mat today, tatted with Scandal organic cotton sewing thread. It's only 2 3/4" across. For perspective it's  next to the size 80 Lizbeth in blue. The yellow size 20 Lizbeth is huge in comparison. This little butterfly done in the same thread is only as big as her thumbnail. Her next Spinning Wheel is out of this wonderful Japanese thread in size 80. 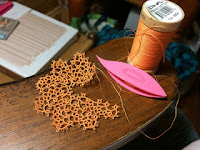 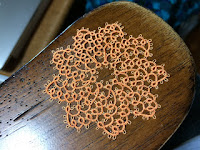 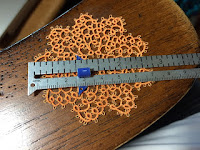 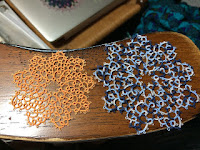 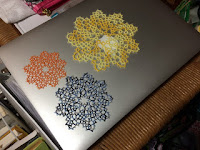 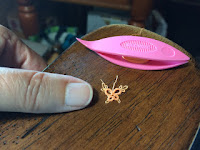 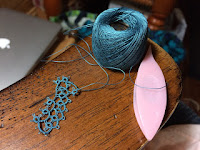 Eliz thought she was ready to start the last round of motifs, but had not paid enough attention to the pattern and she had to cut this all out and start again. The Eighteenth Day of December from 24 Snowflakes in Tatting by Lene Bjorn is tatted in Manuela size 10. 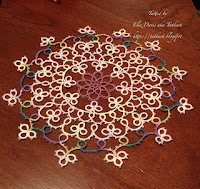 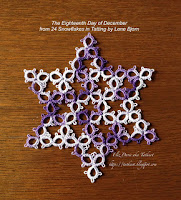 Fox is still chugging along on row 8, since the sad thing about doilies is that each round gets larger and takes longer to tat. 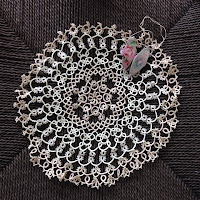 Marie has graciously provided the pattern for making her 3-Layered Flower Brooch and this is the design done in blue with pearls instead of seed beads. She made the brooch pattern into a pair of beautiful earrings and entered them in the fair where they won first place in the earring category. 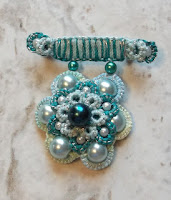 Muskaan did a modern rendition of the pattern for this Snowflake aka Six-Pointed Motif by Louise Hauck in Tatting of To-day. As well as providing modern notation for the design she has given step by step visuals for tatting it. 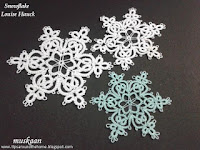 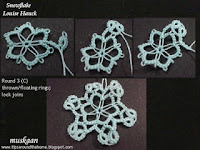 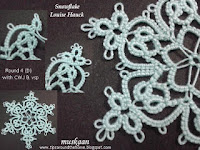