Jane decided that a power outage was a good time to get back to tatting from the Tatted Artistry of Teiko Fujito and the next one is a 3 shuttle design on the cover of the book. She was concerned that the design might cup and as she approached the end of the round she thought she might run out of the multi coloured thread, but she finished with a whole 12 cm left! 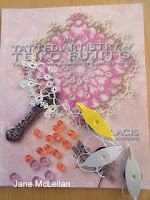 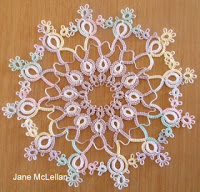 Melanie picked up a purling pin at Lacis and she was working on a necklace just for something to do while waiting in line and the two have come together in a lanyard.

Diane worked on her Spinning Wheel glass mat in size 80 Lizbeth Pink Cocoa. Her new project, Renulek's Napkin "Marta" in size 80 Majestic #823 fits nicely into one of her new thread catchers. Round 2 of Renulek's Napkin Marta is size 80 Majestic #830, which now measures a whopping 2 3/4". She remembered that she didn't post a picture of her July tatting, she accomplished a lot in July! The Pink Cocoa Spinning Wheel is finished and she really likes the way it turned out. She completed round 3 of Renulek's Napkin Marta, but since it had severe cupping even after blocking she's thinking of re-doing this round either with larger picots between rings or a different stitch count. She opted for snipping it off and using larger picots on the rings, and now it lays flat. 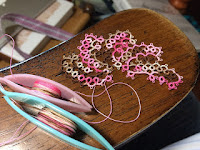 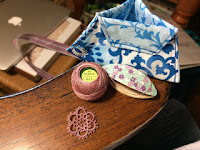 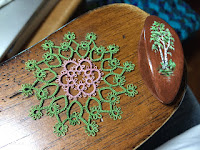 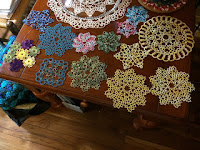 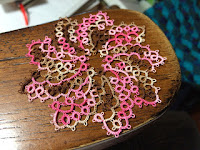 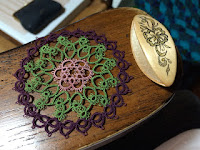 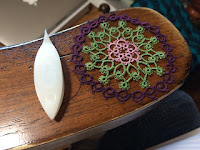 Eliz tatted Fancy Cross by Roger aka Freedman in size 20 Manuela thread, although she altered the bottom as she was running out of thread and she thought this would work better for adding a ribbon. She has made some progress in her practise of filet tatting, even if some of her squares are a little rounded. She wanted to use some of the thread in her stash and she combined this softly coloured variegated thread by Manuela with a lovely Lizbeth thread using a pattern from an old Geocities website. 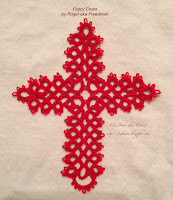 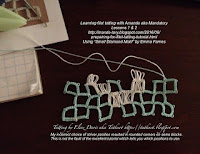 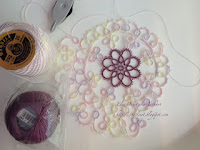 Muskaan bought some variegated thread online because the colours were gorgeous, but when it arrived, the thread was thicker that size 10, more like size 3 and she used it for some coasters and tried out some techniques with it. One advantage to working with the thicker thread was that it made it easier for trying out new techniques.

Wanda didn't add beads to her lanyard, partly because she was tatting in the car, but when she came home from Hobby Lobby with beads she decided to try it out. The addition of beads gave the design more of a leaf shape and it works well as a bracelet. 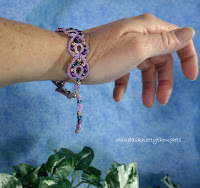