Jane has been tatting Teiko Fujito's designs that use a lot of bare threads and to avoid them she tried out encapsulation. She's well into the last motif in the three shuttle section, and she's trying to follow Teiko Fujito's patterns exactly,  so probably won't use the encapsulation route. Motif 49 is worked in size 40 thread; the lilac is Olympus, the green and white are Coats and it measures 16 cm across. She blocked it before she did the outer chain and decided that the 2 ds between 'arms' on the pattern just wasn't going to work, so she increased it to 5 ds. This picture is all of the designs she done from this section of the book. 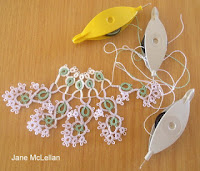 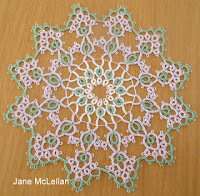 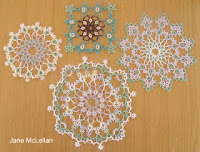 Pop Maria was on holidays but she die get several of of Pascale Provost's Amethyste motifs done. It has a border, but she likes how it looks without and may just leave it. 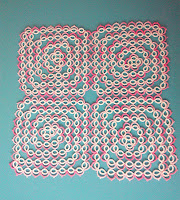 Nikki was looking for another project to do and decided on Renulek's Wiosna 2015 doily, which is pretty easy to follow up to row 7 and if she can't follow it after that she can just quit. 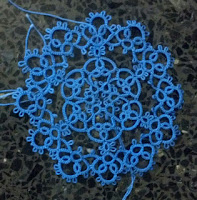 Batty Tatter added Sherry's train pattern to a pink engineer's hat and she might add a puff of smoke coming out of the stack. She's still undecided as to whether or not to add an edging around the brim. 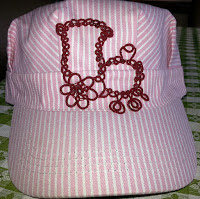 Elsa has been working on her harlequin shawl, but it had too sharp a point at the tip. Fortunately after discussing it with Maglina she made a modification to her arrangement and now things are working out. Her projected shawl has 137 wheels for a total width estimated at 130 cm and she currently has 38 done. 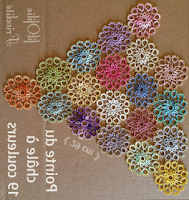 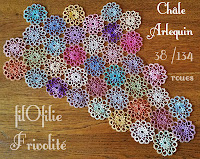 Diane's newest Spinning Wheel is in the gorgeous blue Majestic thread size 80 #849. Running a lot of errands meant for little tatting time, but she did get a bit done. Tangles in tiny threads take a long time to sort out so she didn't get as far on her Spinning Wheel as she expected. She finally has this Spinning Wheel finished and it's 3.5 inches across. Emptying shuttles means she has a nice little baggie of tatted doodles done to give away. Her baggie of butterflies and bits is growing. Another Spinning Wheel glass mat is started, this one in Perfect Quilter Denim. 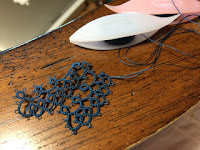 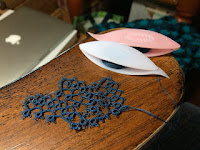 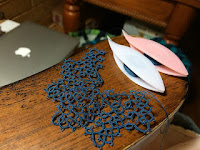 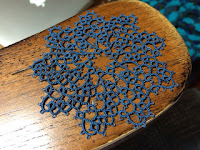 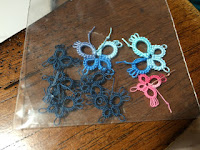 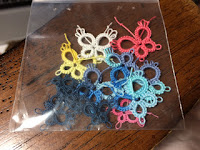 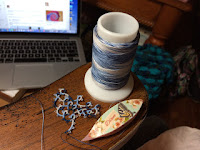 Marie has another Egyptian-style bracelet created. Katrine, by Lene Bjorn is one of her favourite crosses. 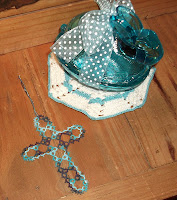 Muskaan did Floral Fantasy Doily by Kathleen Minniti and as usual has shown step by step what she did and the techniques she used. Anchor Crochet Cotton that is made in India by Madura Coats is thicker than other size 20s & 40s threads as she discovered in her first attempt at making Elizabeth (aka Woven Center Flower) by Robina Melville. She increased the picot size to get it to work. She loves the final result. She did have to re visit her earlier attempts at woven picots for review. 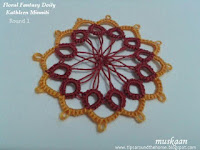 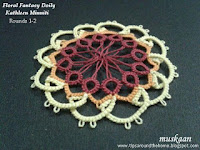 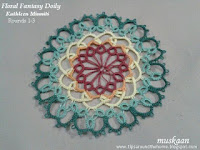 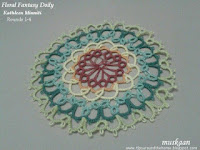 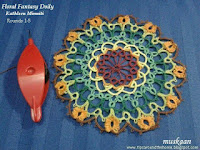 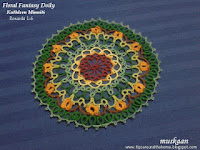 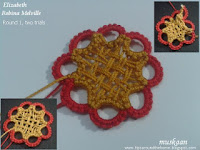 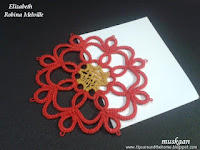 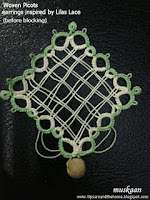 Phyllis tatted the Cobweb doily from the book Tatting Doilies & Edgings edited by Rita Weiss, in Lizbeth 138 Leafy Greens, size 20. Phillip's name along with the train she test tatted for Martha, will be a nice addition to his room and is made using the alphabet from Tatting ABC's & 123's by Houstine Cooper & Handy Hands done in Lizbeth size 20 in Royal Blue and Ocean Turquoise Lt. 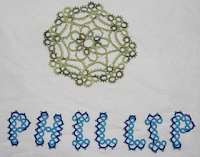 Wanda enjoyed the lanyard pattern so much she tried making earrings to go with it in Lizbeth #646 Purple Iris Lt in size 20.  She entered the bracelet in the fair and took first prize with it. He Harper Edging on the fabric circle also won first prize. 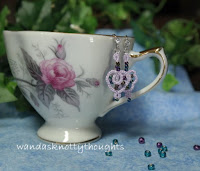 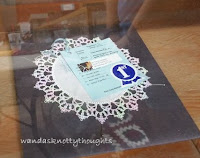