Trees and Holly, Mats and Doilies

Sorry I haven't posted lately. My internet connection has been sporadic lately and I haven't been able to check out all of the blogs to update the challenge page.
Clyde has finished his interpretation of the Jasmine doily from The Tatter's Treasure Chest by Mary Carolyn Waldrep. He used Altin Basak size 50 in colours 336 and 360. It looks beautiful. 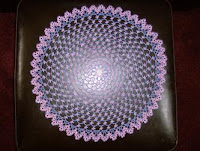 Mark has been busy planning wedding decorations, helping out with a community theatre production and he almost forgot to enter anything in the fair. He has a number of tatted and bobbin lace pieces to enter.

Sharon has done a thread comparison using a 3D flower motif in 7 different threads. It's amazing that threads labelled size 8, 20, 40 and 50 all produce the same size lace.

Donna has been immersed in knitting dish clothes and she's involved in a dishcloth knitting race. Her invitation to Ravelry has given her lots of opportunity to ponder all things knitting related.
Azie has posted a tribute to her pet cat that was hit by a car. Pets become such a big part of our lives, it's hard to say goodbye to them.
Carol created a holly mat inspired by her grapevine doily. She's thinking of giving them as Christmas gifts. She also created a Halloween jester cat, but she thinks it would look better with beads in the eyes. 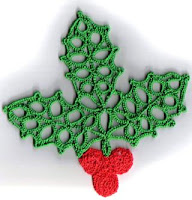 Marilee has been experimenting with making pendants. Sh tried one starting the same as the swallowtail pendant, but it didn't work with larger beads so she created another variation. Designing is such fun when you can take an idea and bend it in another direction. Another pendant was created using some hand dyed thread in subtle earth tones she calls Weathered Stone. They're all beautiful.

Laura has finished her Pyramid mat for now, but she finds the motif addictive and may add more to it or do another so that she has a pair. She's also been working on her tatted jeans bag for the Tatting Treasures From Trash challenge. She has used all of the trial pieces she did for the tatted hanky as well as some flowers and butterflies. It looks marvelous.

Sylvia's blog is back up and running. She posts a tatted motif by Jennifer Williams done with a variegated Manuela thread received in an exchange. 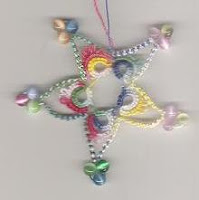 Sherry made a barrette with 3D flowers on it to go with a dress she bought for her vacation to visit her hubby. She also managed to design a new butterfly on the flight over but she'll share pictures of that later.

Wendy is on a yo-yo binge, working on both large and mini yo-yos. In between she has shown us a lovely needlepoint piano bench cover.
Anne has added the 5th clue to the mystery stole and since she almost ran out of knitting projects she picked up her tatting again and did 4 more motives. These are patterns from old magazines and the patterns are posted on Anne's web site. 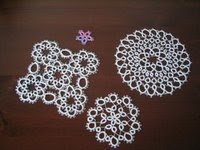 Laurie has been working again from Lindsay Rogers' book Tatting Collage to create more fabric art post cards. Those tress are so creative. 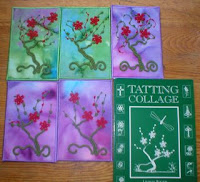 Sarah has been experimenting with hairpin lace, and trying several different types of fringes
Posted by Sharon at 10:29 PM

Hi Sharon!
You are doing a tremendous job on looking through all our bloggs and making an overview on our tatting and other activities! For this I have nominated you as a Rockin’ Girl Blogger started by Roberta Ferguson. For more information see http://www.robertaferguson.com/2007/06/29/rockin-girl-blogger-update/
Best AnneB