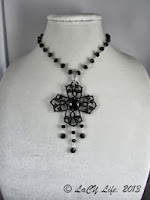 mb duke tatted a 3D bell using a pattern by Renulek in Lizbeth white size 20. She did a snowflake also by Renulek. 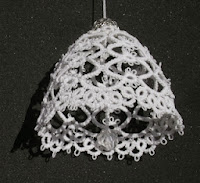 Linda makes chili pepper needlebooks with a tatted edging, Ingeborg, from the book, Tatting Patterns and Designs by Gun Blomqvist and Elwy Persson done in Lizbeth size 20, #19 Jelly Bean to give away. She added more rounds to Miranda Rensberger's  Angels in the Snow to make a small doily for an exchange.

Grace tatted the Clover Bookmark by Kelly Luljak in size 10 Lizbeth Christmas Green for her sister's birthday but she ran out of thread and squared off the end. The matching earrings are a simple clover design in size 80 Lizbeth Christmas Green. She tried them first in the size 10, but they were a bit BIG. She also made a pair of earrings based on the bookmark. 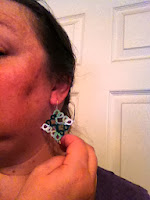 Carrie's friend from the Nimble Thimble group brought in this exquisite tatted hanky with rows of delicate one shuttle lace to show her. 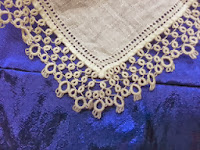 Diane made Ruth Perry's Tatted Christmas Tree 2013 in 20 Lizbeth #601, Snow White with a doodad instead of beads for the trunk. 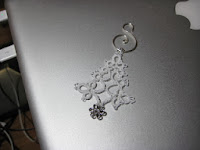 Fox is chugging along with the Danish doily although it's slow going. She's on round 6 and wondering what will happen when she blocks it. 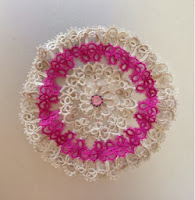 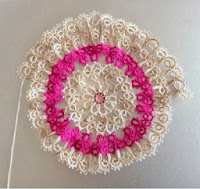 Marie has her little Christmas tree up with it's tatted decorations, most of which are her own designs. She also has the pattern for her tatted Christmas ball completed and has posted information on how you can win a copy of the pattern on her blog.

Mica tatted this Beaded Snowflake from Vida Sunderman's Tatted Snowflakes in a pewter bronze thread colour, that doesn't show it's true beauty in the scan. 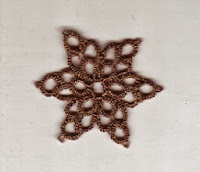 Mistene is making the Lucky Clover doily from Tatting Pattern's and Designs, by Blomqvist and Persson, using Cebelia No. 20, color 745, Banana Yellow.