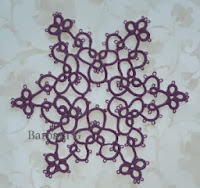 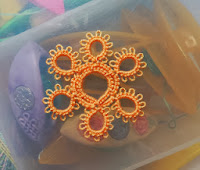 Linda shares her turkey with a tatted edging done in bold festive colours. 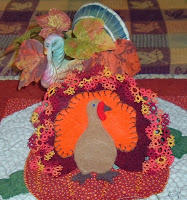 Grace hasn't posted any tatting since February and got dropped of the update list. (Sorry, I don't have the time to daily visit blogs with no new content, so if you go 5 or 6 months without any tatting, your name will be dropped. Just email me to let me know that you are tatting again.) This heart is from Learn to Tat by Janette Baker done in Aunt Lydia's and DMC Perle Cotton. The Tardis from Anne Bruvold's pattern was tatted in size 10 Lizbeth, in what Grace thinks is Royal Blue. It was made for her daughter who was in the hospital and it was well received. She did an earlier trial run in light blue. This heart also from Anne Bruvold tatted in  both size 10 Aunt Lydia's and size 10 Lizbeth. Emma Crew's 34 Hearts, available through use of the Wayback Machine, has 33 hearts in the construction of one large heart. Her nephew's flannel burp cloth was crocheted around the edge in single stitch, then chains and picots in Lizbeth Cream size 10 were added. She notes that the Lizbeth was quite stiff and if she were doing it again she'd use perle cotton because it's softer.

Fox continues work on the Danish doily. She tried several colour combinations, but decided that the ivory thread was the best choice. The multitude of picots, and several re-starts, combined with the unfamiliar weight of the GR8 shuttles has made this slow going. 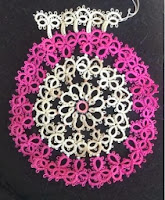 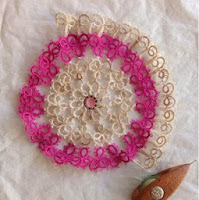 Margaret has been tatting her favourite 3D Angel by Katie Johnson in both white and Lizbeth Ice Blue size 20. She has modified the pattern so that she doesn't have to glue the skirt to attach it to the body. She has also tatted Anne Bruvold's SSSR Angel in both white and Ice Blue. 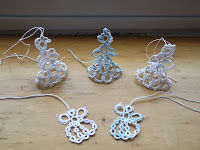 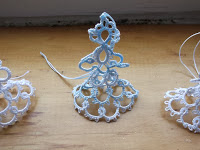 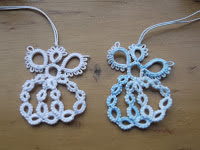 Marie tatted this motif motif with Lizbeth, Denim Whispers in size 20 and sewed the beads on afterward. Corina's Beaded Flower Pattern was the inspiration for this set done in Lizbeth, size 20, Mocha lt and Sea Green. 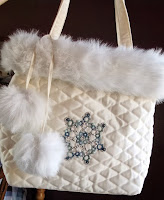 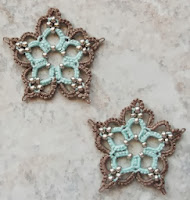