Julie has decided to tat some snowflakes and started with the simple snowflake on my blog. That was followed by Nancy Tracy's Layered Tatted Snowflake. Then she came across a bookmark done by her grandmother and had to put aside snowflakes long enough to tat one for herself. She went back to snowflakes tatting my 2009 Merry Christmas Snowflake.

Diane's next adaptation of Doodad Snowflake #3 has beads on the outer rings. The following one was made without the doodad in the middle. 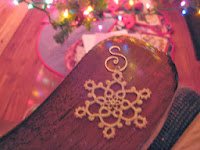 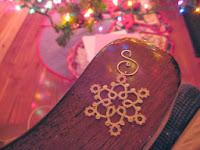 Fox used Altin Basak size 50 to tat Celeste, without the beads and it was easier to work the second time. She finds that the colour combination on the doily is working for her and is very spring like and ideal for a February gift, however the HDT is slowly running out, and might become a problem. 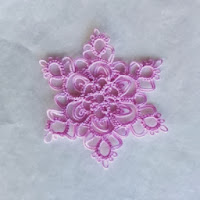 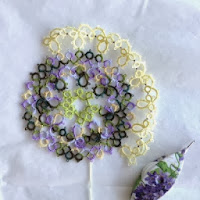 Kristen managed a whirlwind trip home and got to see her new niece all decked out in her pink tatted bib. This little motif done in perfect Quilter and DMC 80 was all the tatting she did while away. Fox sent her some Sunlit Shuttles which she put to work tatting the Tatted Roman Cross in size 30 Cebélia. She decided to practice her new skills and tat a thank you at the same time with this beaded sunburst. 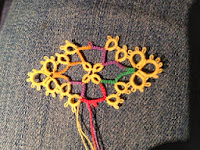 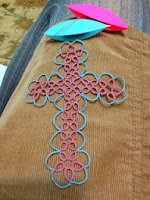 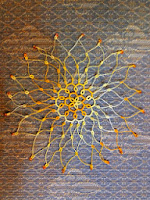 Margaret is still tatting snowflakes for Christmas. This one is  the Eighth day of December from the book 24 Snowflakes in Tatting, done in Lizbeth size 20. From the little Russian Tatting book Kristen sent her, she tatted this one which is number 11 in her countdown. 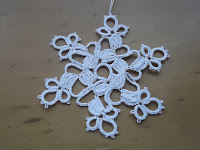 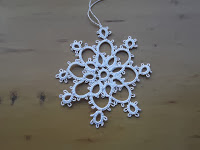 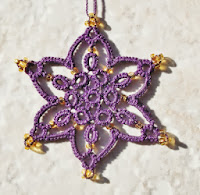 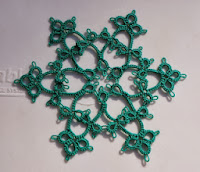 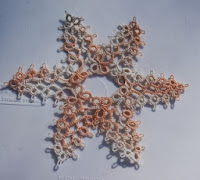 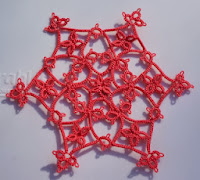 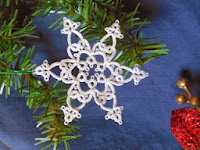 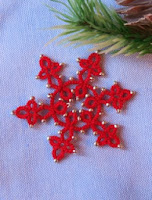