Barbara tatted a design by Samantha Melnychuk, in Lizbeth size 20 #376, but she noticed after she started the last row that there should be another bead at the base of the last ring and it was omitted in the pattern. 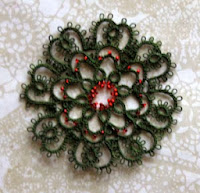 Diane has tatted another doodad snowflake replacing the Josephine knots with beads. 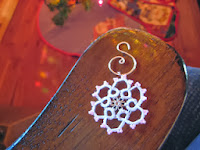 Fox has discovered a mistake in her doily which occurred on the 4th row. Of course she noticed it while tatting the 6th row and she hasn't enough thread to re-do it. Mistakes are the mother of new designs. Right? 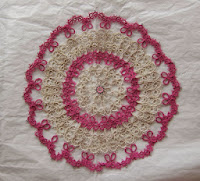 Margaret tatted a snowflake from an old Anna Magazine in Lizbeth thread no 20. 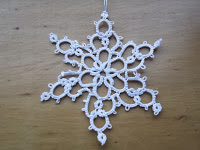 Mica tatted more patterns from Patti Duff's Minitats and found that hiding ends isn't as onerous when it's Christmas and they're seasonal designs.

Wanda usually does her Crowned Wheel in variegated thread but she did it in white for the first time. The small snowflakes are just her doodling around to make small snowflakes for the bags she's been decorating. 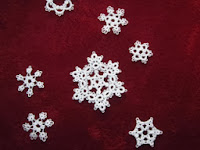