Cigdem went through a lot of trial and error to create Carnelian necklace and earring set using a combination of Perle Iris thread in a variegated amber brown colour and DMC thread in a solid amber colour, along with natural carnelian and delica beads. 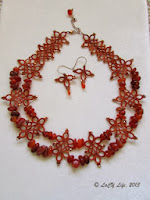 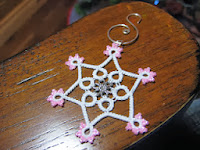 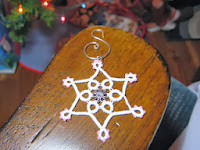 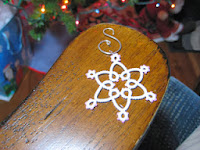 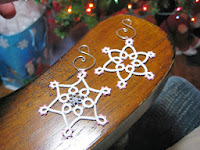 Fox finished her edging and has it attached to the hanky. The lace and the fabric are a perfect compliment to one another. This cute little snowflake is a pattern from Frivole. The last 2 rows of ring and chain have made this doily pattern quite sturdy. Now she's taking a short break from the doily to practice some daisy picots. Céleste, Frivole's recent snowflake pattern was tatted with the very fine, YLI quilting thread, that Diane sent her. Very pretty, But YIKES! very teeny! 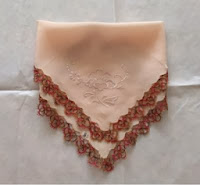 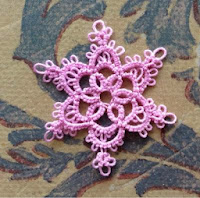 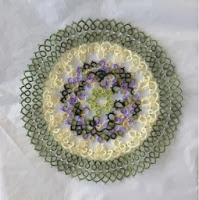 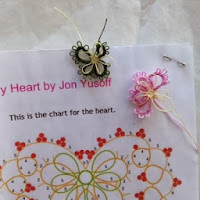 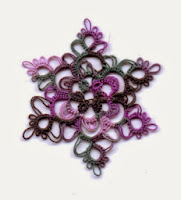 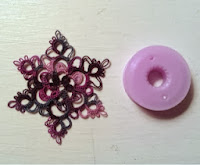 Kristen was working on the Knobby Snowflake from Christmas Angles and other Tatting Patterns and she was going to stop here, but a TV watching marathon gave her enough time to complete it. Even the dog got in on the act. An abbreviated form of Snowflake 1 from Festive Snowflakes and Ornaments was the result of running out of thread on the shuttle. Some green thread left on a shuttle was an invitation to make the other thistle motif from Mastering Tatting. Hubby was commandeered to frizzle a few of the thistles. True love is a hubby who is a facilitator. The results of the corporate effort is a lovely piece of lace. 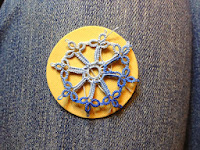 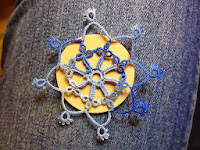 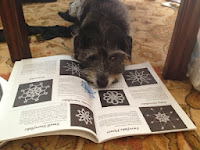 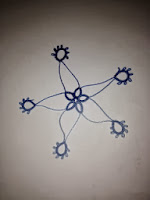 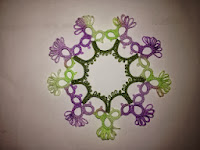 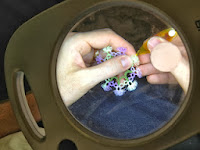 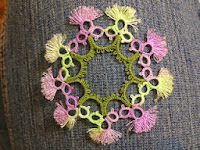 Margaret tatted Wheel of Nine Rings, from the book Christmas Angels and other Tatting Patterns by Monica Hahn in Lizbeth size 20 thread. The Five Inch snowflake is from the book Easy Tatting, but she feels like it's too open and floppy. One of her favourite designs is the Fluffy Snowflake by  Wally Sosa. She used Turkish Oren Bayan Perle no 8 thread, which makes a really lovely fluffy look when frayed. 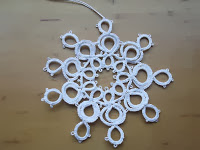 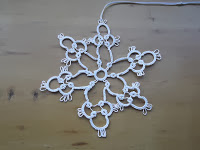 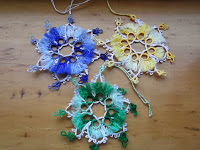 Martha tatted the 5th Day of December by Lene Bjorn from 24 Snowflakes in Tatting. 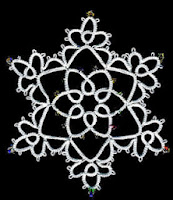 Wanda needed a flurry of snowflakes in a hurry, so she wanted a simpler easier pattern. Starting with a fixture in the middle helps and this charming little snowflake has Josephine knots as well as rings around the outside for interest. The first trial wasn't going to work with the stitch count she was using, so she just modified it into a bell. Another snowflake missed the JKs but still turned out all right as you can see in the side by side comparison. 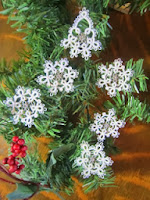 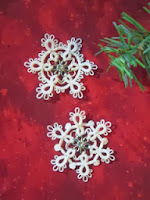