Diane continues her snowflake countdown to Christmas with Doodad Snowflake #4, minus the doodad, and a single bead replacing each picot. Doodad Snowflake #5 with it's outer clovers is one of her favourite designs. 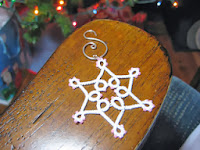 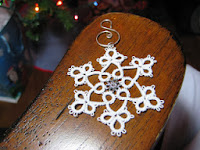 Fox tatted Mirabelle, another of Frivole's designs in Lizbeth #40, and Krystle's Wisteria Lane HDT. It's shown here next to a paperclip for scale so we can see how tiny it is. 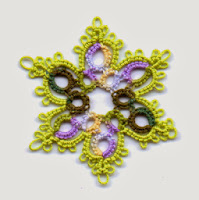 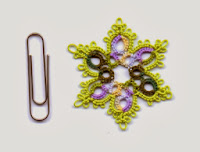 Kristen tatted the Whirlaway Snowflake from Tatted Snowflakes in a size 30 Cebélia thread that's not exactly a Christmas colour, but still pretty on the tree. Another snowflake from the same page is the Small Loop-Stitch Snowflake, which needs some blocking to spruce it up. That completes her 25 Motif Challenge and an additional 25 motifs done in time for Christmas. 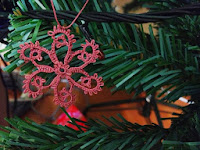 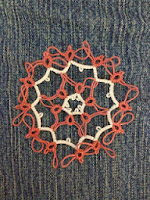 Margaret is also continuing her snowflake countdown with the Snowflake Ornament from Easy Tatting in Lizbeth size 20. The Sweetheart Snowflake pattern was designed by Natalie Rogers based on Gina Butlers Brides Garter Pattern. She didn't like the way it cupped, so she added picots half way up the chains to make it hold it's shape better. Next she tatted the  Double/Triple Picot Snowflake pattern by Sally Magill,  which makes a neat little snowflake. 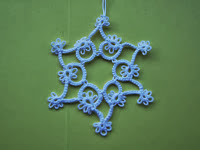 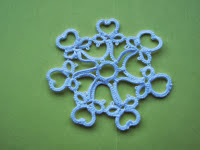 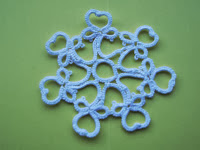 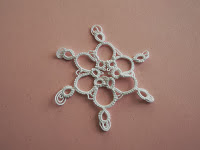 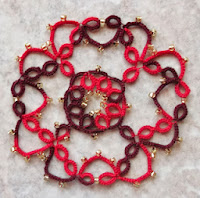 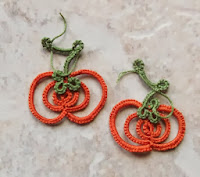