mb duke found some wrapping paper that reminds her of tatted snowflakes. These tatted snowflakes she has mounted on cards so they can be given as gifts and removed from the card to put on the tree. 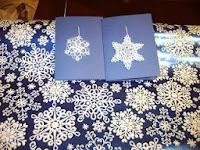 Linda has made some simple gifts. Scissor pouches with tatted medallions and picot gauges, along with a pair of tatted earrings using Kendra Goodnow's pattern from a Handy Hands newsletter. 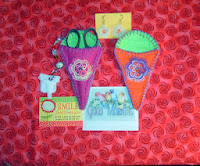 Diane tatted her Doodad Snowflake #4. She likes her patterns because they are quick and easy to do, leaving her time for her doily. 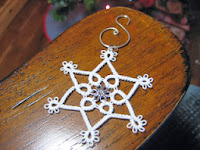 Kristen received some Lizbeth Scottish Thistle thread from Fox. It wasn't a colour she would have gone for herself, but she really liked it especially for this pattern. It's an interesting colour for a "snowflake" and she wouldn't normally fray the picots, but for this pattern it works. Every once in a while it pays to get out of the comfort zone and work with different colours and different techniques. 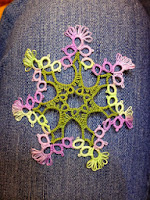 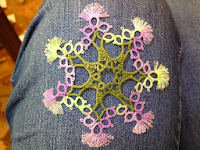 Margaret tatted Diane's Doodad snowflake although the only doodad she could find didn't create quite the same effect. 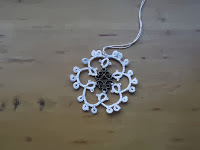 Marie is still tweaking the pattern for the Owl Earrings, this time by tatting the beaks in gold thread. 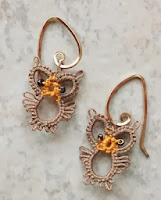