Vera has decided to join our challenge and she has been working on Renulek's 2017 doily. Rounds one and two were completed without problem. Now she has round 3 done. 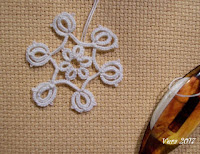 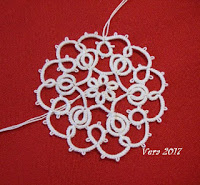 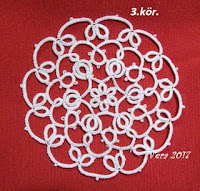 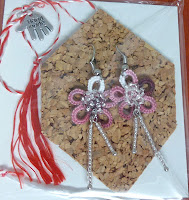 Elsa is looking at Mary Konior for her next patchwork motif to use in embellishing her pillows. She immediately noticed that there were similarities between Masquerade and Patchwork and then she noticed similarities to a design in Coats' Learn Tatting 660 Book. Then she saw similarities in this medallion that she discovered the book by Tina Frauberger, Schiffchenspitze (1919). Now she's intrigued by other designs she has found in the same publication and she's thinking she may have to do even more pillows.

Melanie has 4 different projects on to go, including something simple for demonstration purposes and Renuleks 2017 doily which she plans to add beads to on the next round. 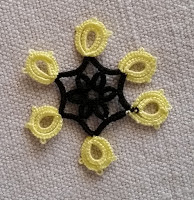 Diane took along some of her Ice Drops to share with the retirees she met for lunch. Luncheon and family visits didn't leave a lot of tatting time, but she did get another Ice Drop done. She also managed another motif for the runner. Subbing allowed for tatting an Ice Drop, but she forgot that she had already finished one in the morning, so that was 2 for the day. She did 4 Ice Drops today and on each one she added another bead to the tips which makes it really easy to see the changing effect. They all look terrific! 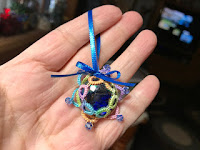 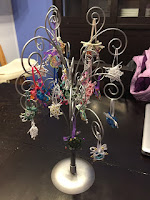 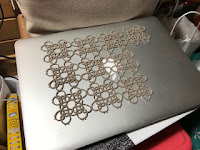 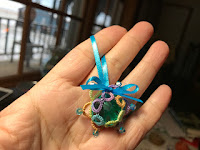 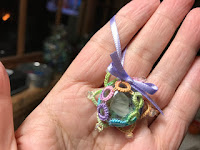 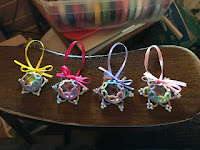 Fox says she thinks she's going to keep the lilac doily and substitute this one instead Tatted in size 80, Lizbeth. All of the doilies are comparable sizes. Now that it's finished she loves this lilac doily with beads and she's decided to keep it, for now. 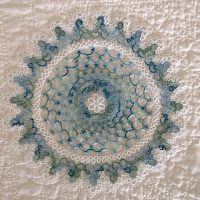 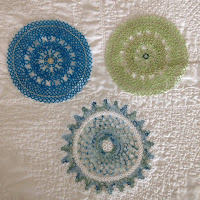 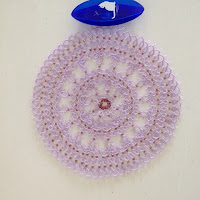 Margaret was looking at a bunch of daffodils and she came up with the idea for an Ice Drop adapted from the pattern for the Daffodil brooch by Jennifer Williams. She did the first one in solid yellow and the secont one with white rings around the glass gem. 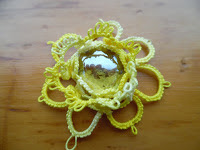 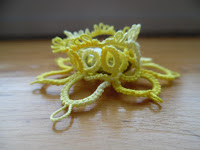 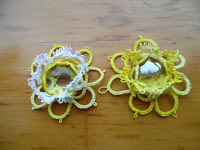 Muskaan used various shapes of sequins to create a wing-like effect, along with a beaded star in the center when she tatted Wally Sosa's Birthday Angel 2017 which incorporates Turkish Tatting or Oya Makuk. Muskaan has experimented with filling in rings and shows the progression of her experimentation. 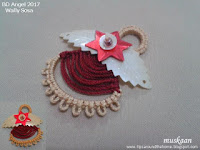 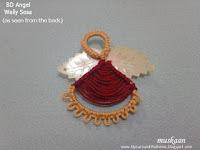 Nikki tried making a basket out of the centre motif of the Wiosna 2015 Renulek doily, which actually formed a bowl all on its own when she used the same length picots instead of joining picots in the very centre of the motif, but it's not suitable to add a handle to. Since she had thread left on her shuttle she decided to tat an Ice Drop. 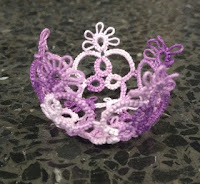 Sue had the top and bottom of an ornament done but was trying to figure out what to do for the centre all the way around the ornament. Here it's half done making the white frilly to look like snow and she inserts the ornament. Then while carefully holding the ornament in place she finishes tatting around it. Right up to the last little bit where it all joins together. Here are the 2 ornaments she has completed so far. 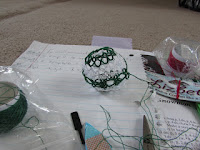 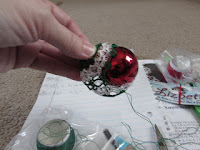 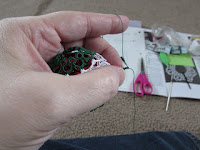 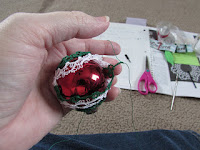 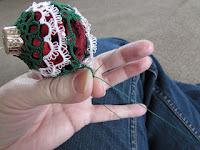 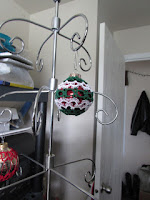 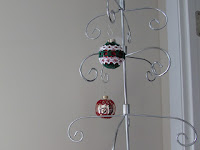 Wanda's stash of completed, give away, bookmarks was depleted and she started to stock up again making her ‘Branson’ bookmark in Lizbeth Caribbean size 20. She found a partially done bookmark to work on next in a pattern from one of her Alaska bookmarks, but sadly she's run out of thread to finish it off, so it's going back in the unfinished pile.