Vera tatted this celtic motif in stages so that it's easy to see how it's constructed. The first step is a 4 ring motif. Then a small motif with rings and the end of long chains. The rings are inserted through  the rings of the first 4 ring motif. Then the next round is tatted joining into the first two motifs making one large complex design. Here it is finished front and back. Finally a small charm, bead, or button is added to finish it off. 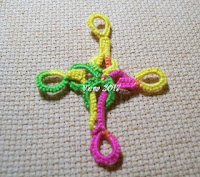 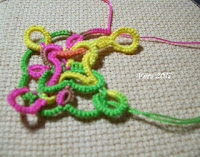 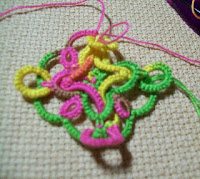 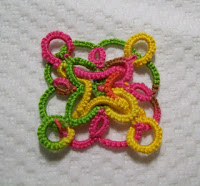 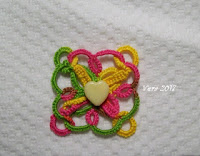 Sharon has round 2 of Renulek's spring 2017 doily done. 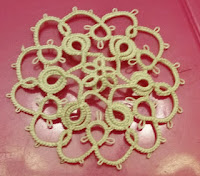 Pop Maria saw the flower Muskaan tatted and had to try it for herself. Not being content with the basic flower she had to jazz it up with beads. She liked Diane's Ice Drops and had to give them a whirl. Here's one with some graduated drop beads. Then one with lots of fluffy, frilly, picots. Lots for picots make for a nice flower and a lovely lapel pin. 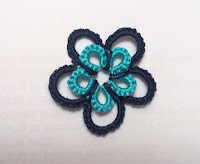 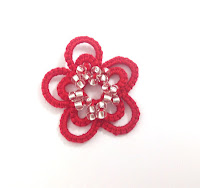 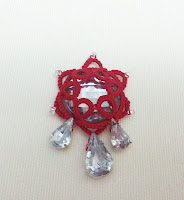 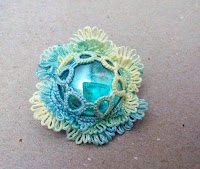 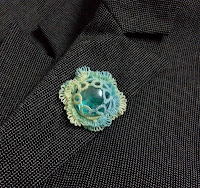 Marthanne made her first Angel in Lizbeth 20 #152, but she decided to try it again in size 40 and she made two with Lizbeth #168. She began Renulek's 2017 Doiley beginning with a chain.  You can see that it did not work very well, so she tried again. She's not happy with the chains in round 2 and she'd like them to be more even. Round 3 is started, but now she wants to see what it looks like in size 40. The answer, of course is that it looks wonderful.

Diane has decided that now that she's working on the length of her sister-in-law's runner she'll post as she finishes a row of three motifs. She tatted an Ice Drop and made it into an ornament. The she tatted another one and turned it into a pin. Here's the bar pin on the back. She's working in green for St Patrick's Day and she has 5 completed. Diane ordered some clear acrylic beads and they work really well for Ice Drops. She also had to tat some more colourful Ice Drops. These two Ice Drops finish off her Rainbow Taffy thread. There are 38 Ice Drops here, plus the 5 that her daughter Joanne took home with her, making a total of 43 basic Ice Drops from one ball of thread! 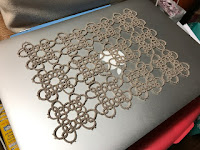 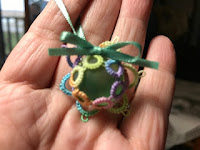 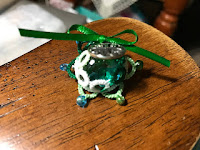 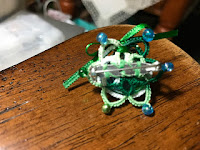 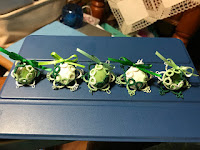 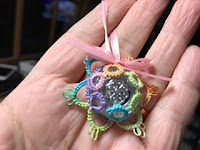 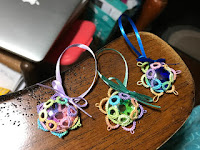 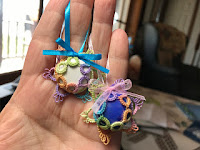 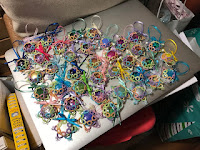 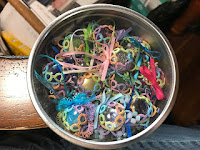 Muskaan shows the process of how mistakes can be turned into new designs. Her first needle tatting attempts were some of the basics. These morphed into her Burlesque Pendant. Then she went a step further and worked out how to shuttle tat her needle tatting design. 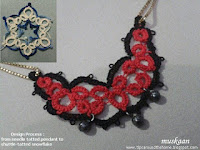 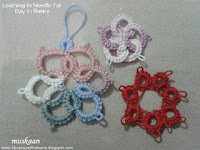 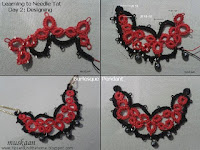 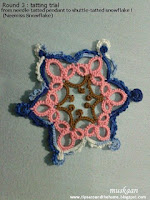 Nikki was having trouble selecting a new design to start so she opted for tatting Renulek's Wiosna 2015 again, this time working in Artiste size 10 in black and wild berry. 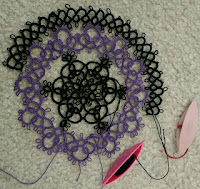 Sue is making progress on her tablecloth and ignoring all those ends she'll have to hide. (Been there, done that and can I just say, on large projects, don't leave the ends until last, hide the ends as you go so that when the last motif is finished you'll just have the last 2 ends to hide and you're truly done. At the stage where Sue is at, I'd make a point of hiding ends on the next motif finished and one additional motif until I'm caught up.) She finally found a pink ribbon to go with the necklace for her granddaughter and both necklaces are finished with clasps. 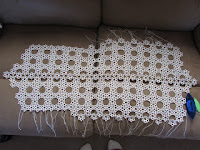 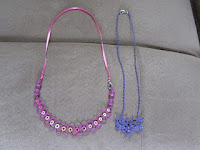