Elsa couldn't resist trying out Mary Konior's free form necklace in the Gutterman silk cord 30 she found in the flea market. She wanted to use a polyester thread to stabilize it, but she didn't have a matching colour, so she elected to match the thread colour to the beads she used. The necklace is a nice match to the "Curb" bracelet by Corina Meyfeldt she did with the same thread. The Tina Frauberger book inspired this very spring necklace she tatted in nylon thread with 5 - 6 mm diameter green beads and a purple cord necklace clasp. Her Acrylic Paint and Tatting Lace picture was featured in MUSED, the BellaOnline Literary Review. 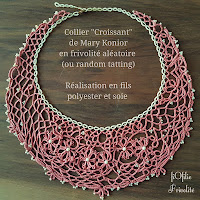 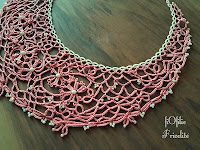 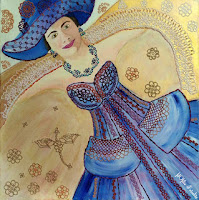 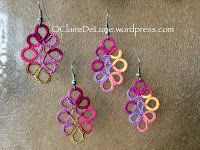 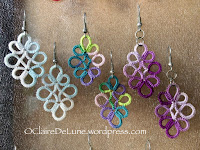 Diane was happy to meet up again with the Tollway Tatters, including Rita, who brought along some Lizbeth thread samples and Diane chose Royal Blue, which made this lovely Ice Drop. She tatted this one in Blue Ice while they were chatting. She finished another in Royal Blue when she got home. She managed to figure out that it takes about 5 yards for an Ice Drop, 3 on the shuttle, 2 on the ball. Diane has ordered so many beads and gems that she can't remember where she bought them all, but she thinks this one came from Ebay. She's completed round 5 of Renulek's 2017 doily. Size 20 Lizbeth #603, Ecru, which isn't normally a favourite colour, but paired up with a blue gem, she's loving it. Round 6 or Renulek's doily is already started. The row isn't finished on the runner she's doing for her sister, but she figured that if she didn't post it when she thought of it, she'd never get to show progress. 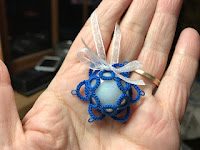 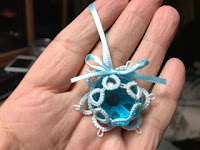 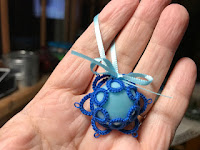 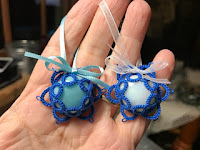 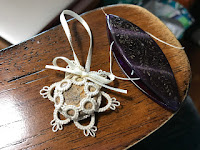 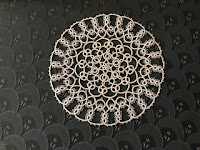 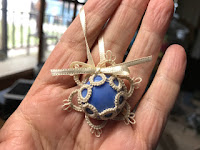 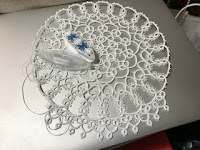 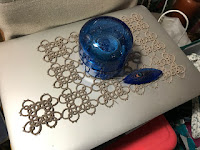 Fox didn't like the long bulky bookmark, so she decided to go with Mary Konior's Curds and Whey done in size 40 Lizbeth, which is a better match. Her ball of brown thread is shrinking fast and she's wondering if she needs to order another one. She isn't used to working with size 20 thread and already this is a large nine inch doily, so she decided she did need to order another ball of thread. 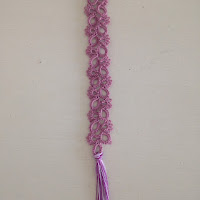 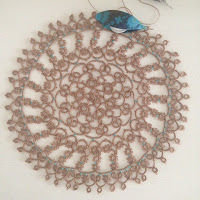 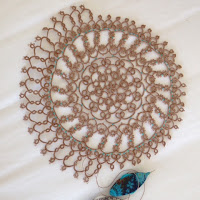 Margaret tatted the Butterfly Heart, by Irene Woo in size 20, Scottish Thistle. She posted it in honour of Irene who passed away recently. 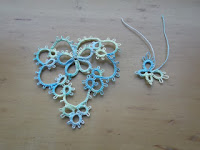 Marie tatted a variation on Angeline Crichlow's, #20 Medieval Cross. She found this old glass, button at an antique store and had to use it for another bracelet.

Muskaan likes hexagons and designs where chains outline previous elements, so she just loves Star Dahlia by Anna Barzyk. The Clover is by Mariya Darydova, the model on the left done verbatim, the one on the right The right one, tatted first, she worked all 4 leaflets completely, instead of a split chain, and then tatted the chain stem. 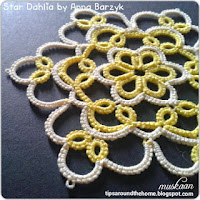 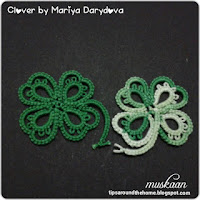 Nikki made 12 of these little celtic-knot shamrock clovers using the pattern by Merilee Rockley. She wishes she had read Muskaan's blog before she started this doily because a lot of the tips shared would have helped her with this row, but it's done now. She needed a large shuttle for the next round and had to empty one by tatting this little heart. 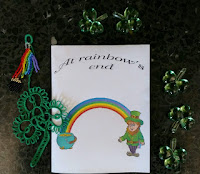 Sue tatted this Fancy Snowflake from Easy Tatting by Rozella F. Linden ornament with DMC Metallic embroidery thread, which was a stinker to work with. She missed a couple of joins, but the thread shreds when you try to undo it, so she left it and just tied it together around the ornament. Here's the set so far. Both sides are currently equal on the tablecloth and now she's adding length to the center so she can work on getting it all to the width of the rest of it. 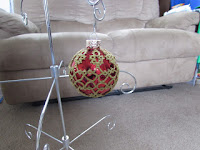 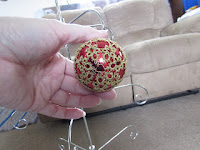 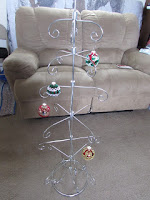 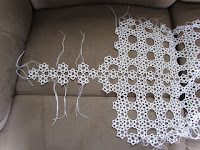 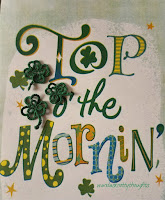