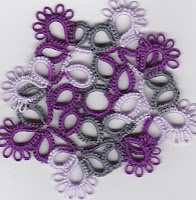 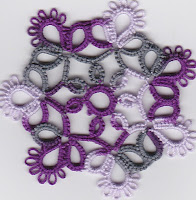 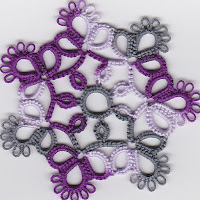 Elsa had plans to decorate 3 pillows with lace and the first used a Jan Stawasz design which she thinks she'll sew on with the corner of the lace to the side of the pillow. The intricacy of the design doesn't really make the individual motifs stand out and the edging further camouflages it. 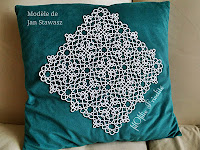 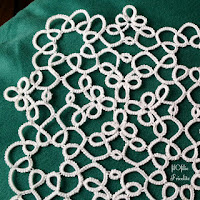 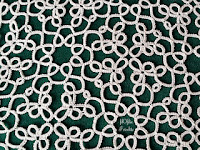 Diane says the gem in this Ice Drop reminds her of a root beer float so this one is called Root Beer Fudge. She liked the pink one so much she had to revisit it. She decided to change the construction a bit and it isn't a big adjustment but she likes the results. She did another Pink Fudge variation with orange. She had an idea to add beads on the side rings and it gave this Ice Drop the perfect amount of bling. The Fudge Dark thread hides the pink of the glass gem, but it's really pretty in person. This is a glow-in-the-dark gem that she'll have to go in a dark room to see if it really does glow. Time to go hide in the closet. She's still working on her SIL's runner and she likes the way it's coming together. She was straightening up her tatting supplies and came across these pearl beads, so she had to tat an Ice Drop to go with them. Rainbow Taffy thread just blends so well with so many different coloured gems and beads that it's been her carry-along project for several days. 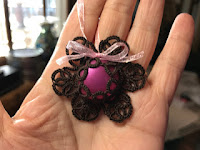 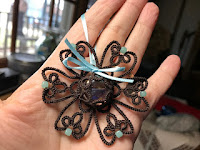 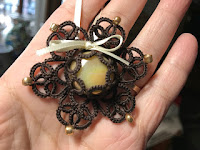 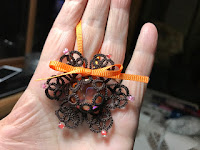 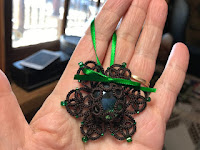 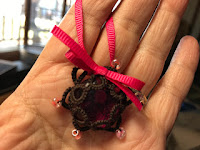 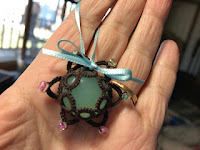 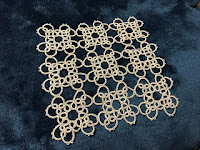 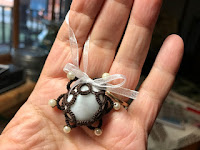 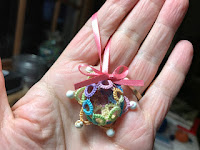 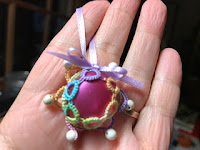 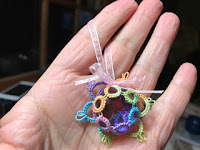 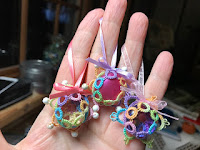 Eliz tatted a variation on Jane Eborall's Large Seahorse and even omitting beads and some rings it's still a lovely seahorse and another finally, finished, project.

Muskaan tatted Cherry Blossom Doily 1 Variation by Hye-oon Lee in size 40 Anchor Mercer Art. 4054 : pink - 052 and brown 00352. Tamara posted information on making a cardstock shuttle, which Muskaan tried out and gave feedback on. A more durable version was made out of a shampoo bottle for the times when she needs to load on lots of beads. (Personally I refuse to tat with beads on anything but a bobbin shuttle where the beads can roll easily around the centre on the bobbin, but that's me.) 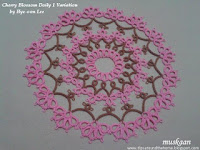 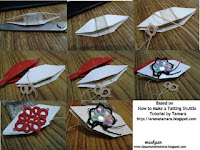 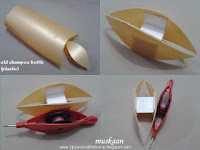 Sue has been working on a tablecloth that she started in 2011 and she finally figured out how to achieve the half-moon shapes that the centre strip has, which breaks up the design and gives it some character. 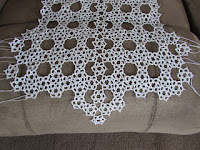 Wanda picked up some wires that had been part of a cable and finger tatted them just to see if she could, but tatting with wire is hard on the hands so she quit after this bit. 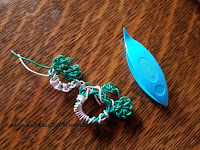 A very interesting and totally valid observation, Sharon ! Give me a bobbin shuttle Any day :-)