Sharon couldn't resist Renulek's 2017 doily and after getting out several balls of DMC size 30 cordonet in ecru she started in, but had to do a refresher course on how to do onion rings. 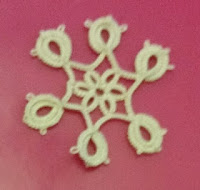 Sarah likes 'Gent' from Adelheid Dangela's book Occhi-Patchwork and More, but she finds it irritating when a centre rosette ends with a split ring to climb out to the next round, resulting in one of the rings pointing the opposite way from the others. So then she started playing around. Upper left, the original, no split ring. Upper right, original, climbing out with a split ring (the split ring is at the top - at 12'o clock). Lower right, first experiment, since the centre rings are all 5-5-5-5, she tried 5-3-4-3-5; the space in the centre of the rosette is too large, but the rings are pleasingly round. Lower left, second experiment, she used 7-3-2-3-7, to make the centre rosette smaller and the free end larger. Seeing them all together she's wondering if she's just being picky. 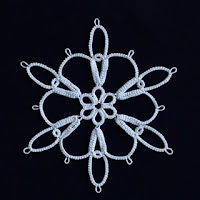 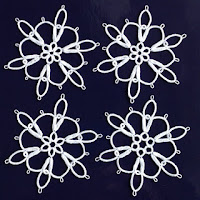 Elsa is working on her second pillow ahead slowly and just completed three rows of three patterns from the book of Tina Frauberger Schiffchenspitz (1919) and republished by Mary Konior in the book Tatting Patterns (1989). The only problem is that the 3x3 motifs aren't as large and she'll need to tat 4x4 motifs for the pillow. 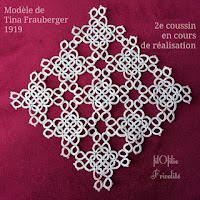 Diane has 4 more Ice Drops done and she's still working with her ball of Rainbow Taffy thread. These 4 Ice Drops chains have 1, 3, 5, and 15 picots. 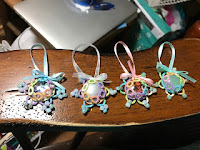 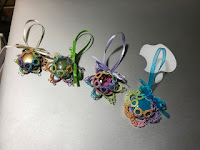 Fox is loving how this size 20 brown thread is looking for the start of Renulek's 2017 doily. 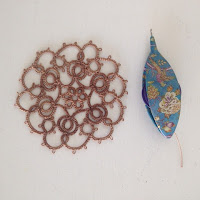 Laurette tatted Overlapping Chains bookmark by Jon Yusoff and she's not sure she likes it with the charcoal in the middle with brown on the outside. The same colours but different placement makes all of the difference. She tatted another one to go with Feast of Crows but forgot to post it earlier. 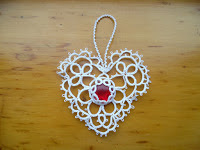 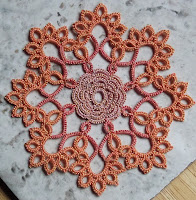 Muskaan loves the simple lines and the elegant shape of the petals on these Tatting Decorations by Daniela Mendola. She was particularly interested in the bare thread line overlapping the first round petals. 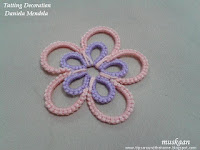 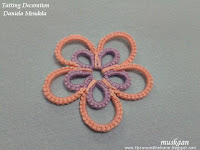 Sue started the first half of the ornament cover using an online pattern a month ago. The she started the second half, joining the top and bottom as she tatted. It's a little awkward, but easier than working with the ornament inside. Since the cover completely encapsulates the ornament, at some point before the opening between the halves gets too small you have to insert the ornament. That's when it gets not just awkward, but downright complicated. Here are all three of her completed ornaments. Remarkably, she not only finished the ornament, she's also gotten more done on her tablecloth. Way to go Sue! 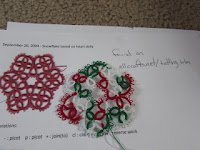 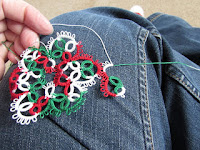 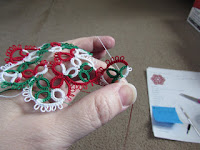 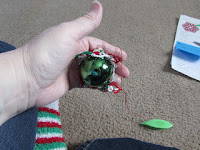 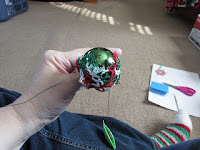 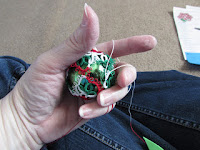 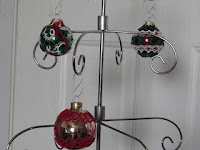 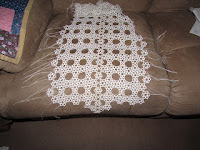