Lilas has mounted some flannel backed fabric in frames to create a display stand for her tatted necklace. 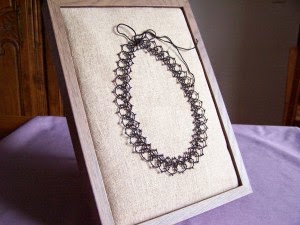 Sue started the hat from Kirstine Nikolajsen and Inge Lise Nikolajsen's 3rd Tatting Book, but misreading the instructions meant she had to start again. The second try she forget to join the outer rings. Hopefully the third try will work. The necklace is still in process. Her try at Celtic tatting seems to have taken an odd turn, so she'll give it another try. 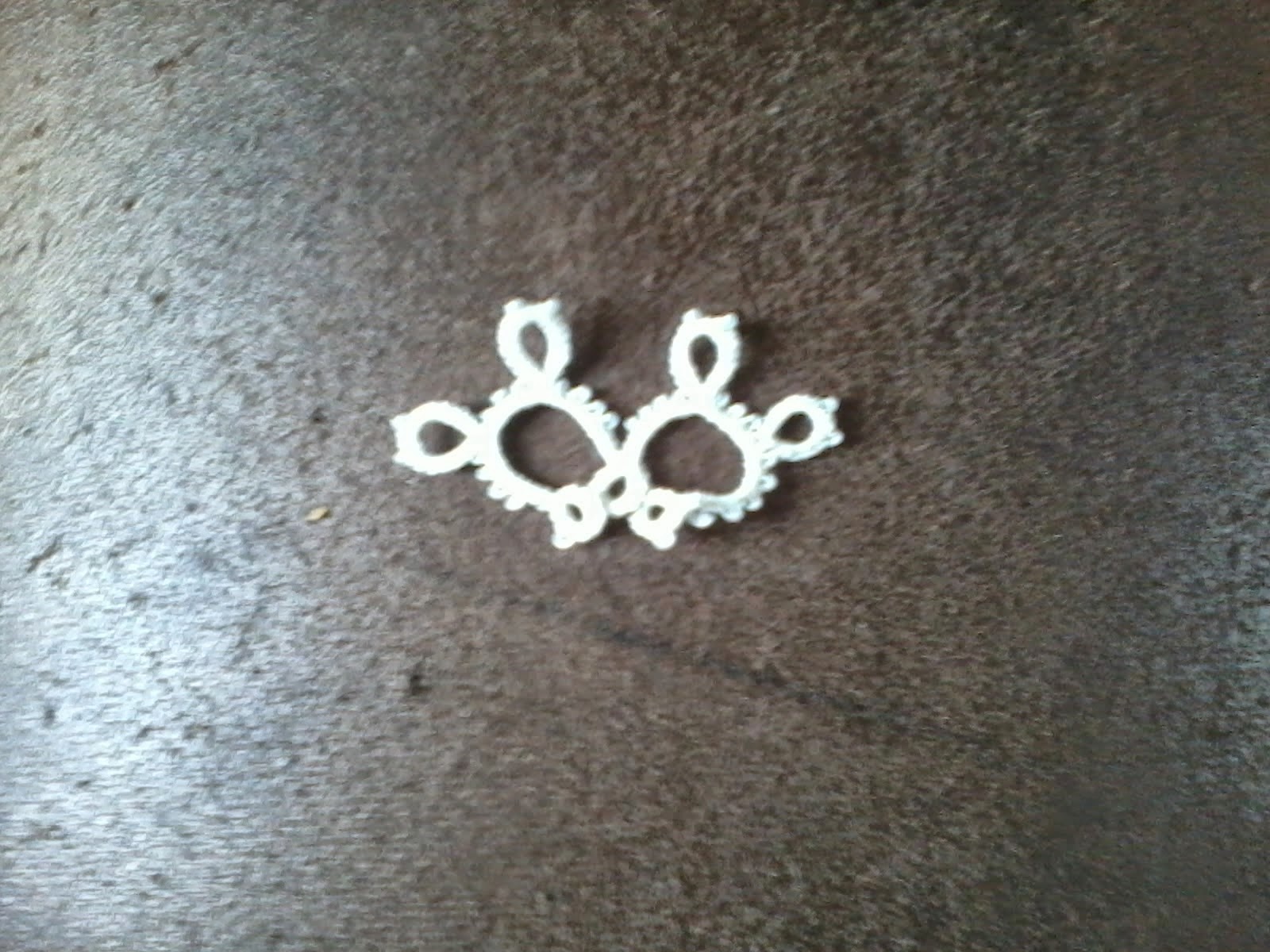 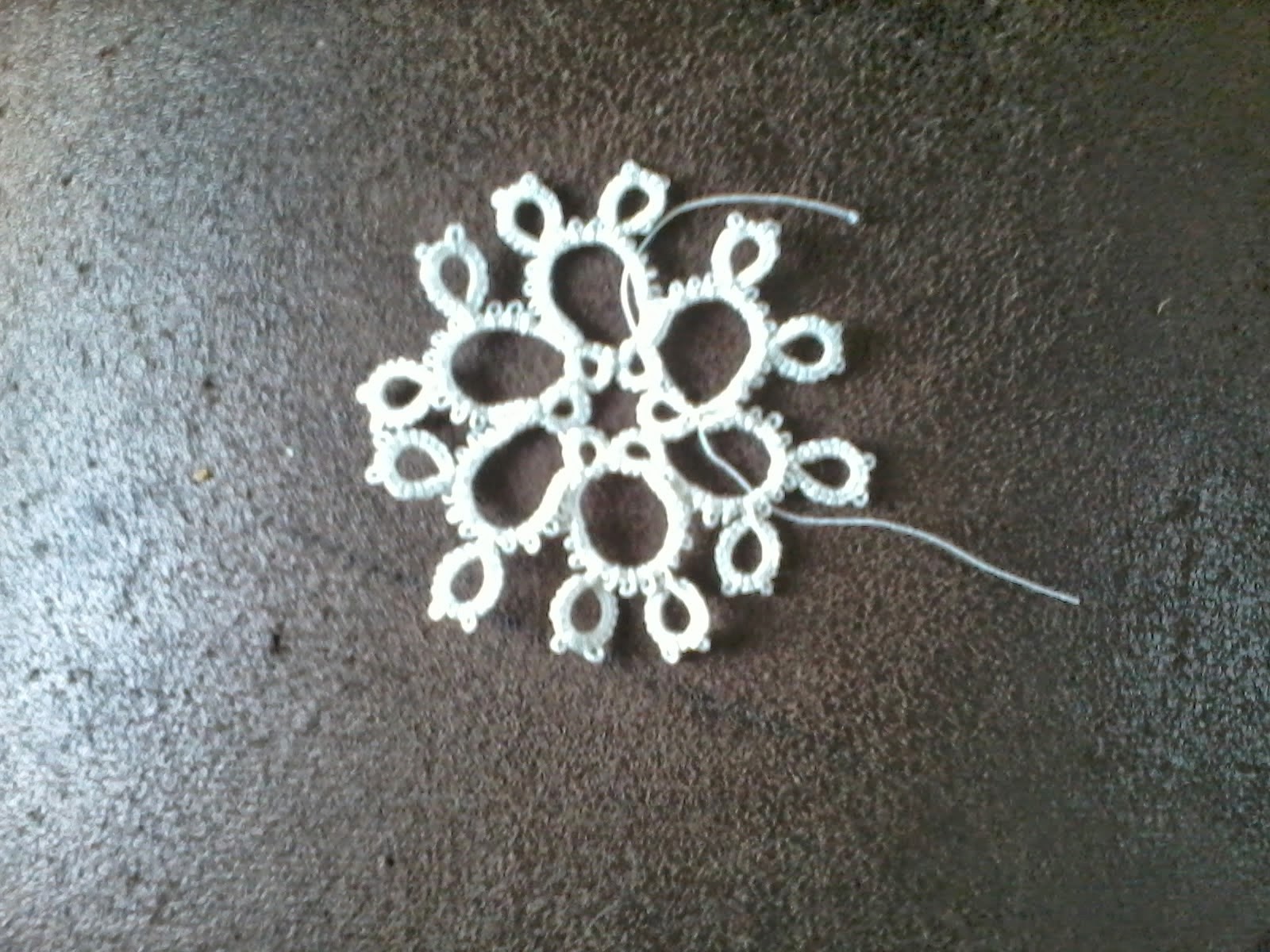 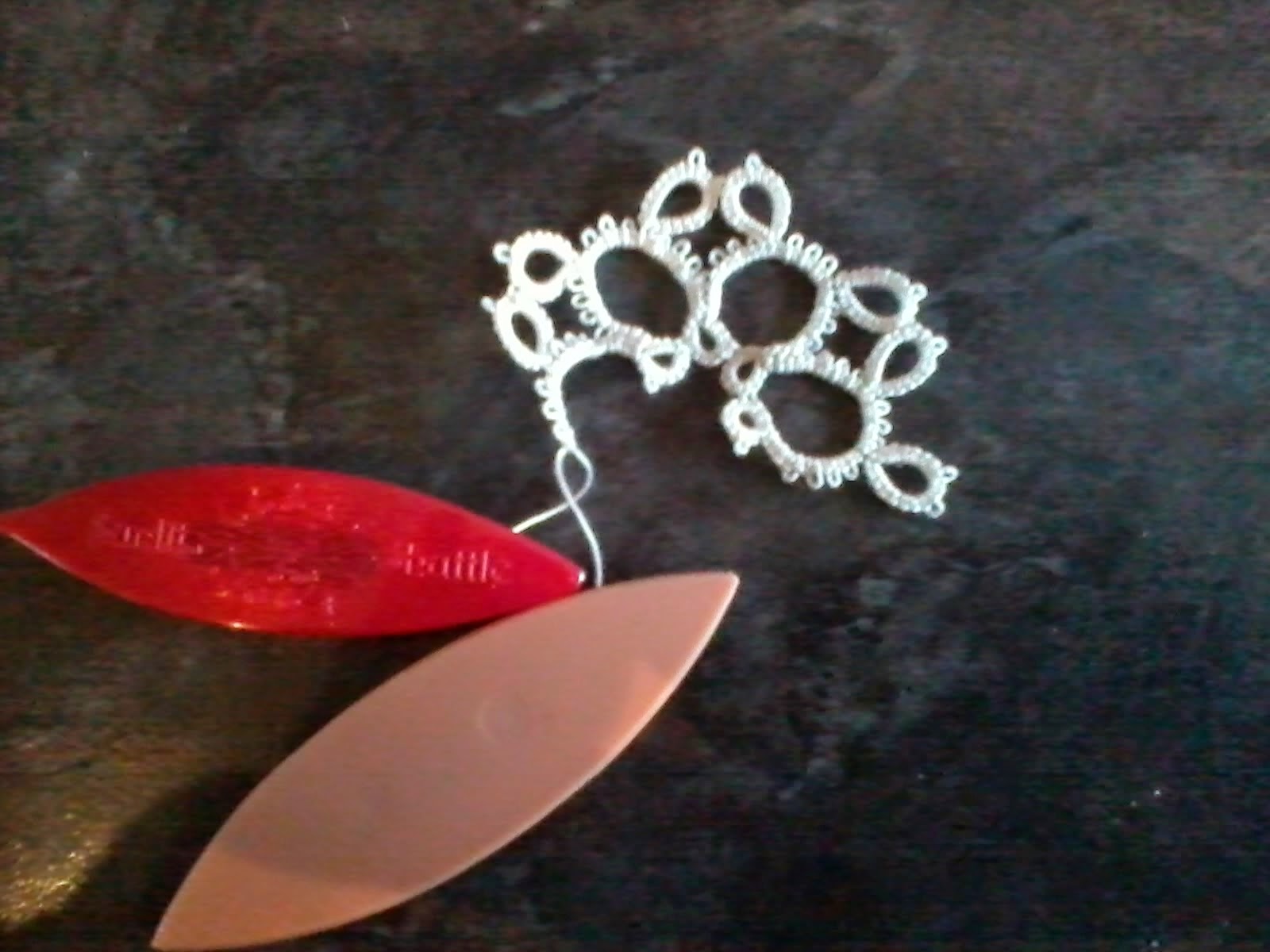 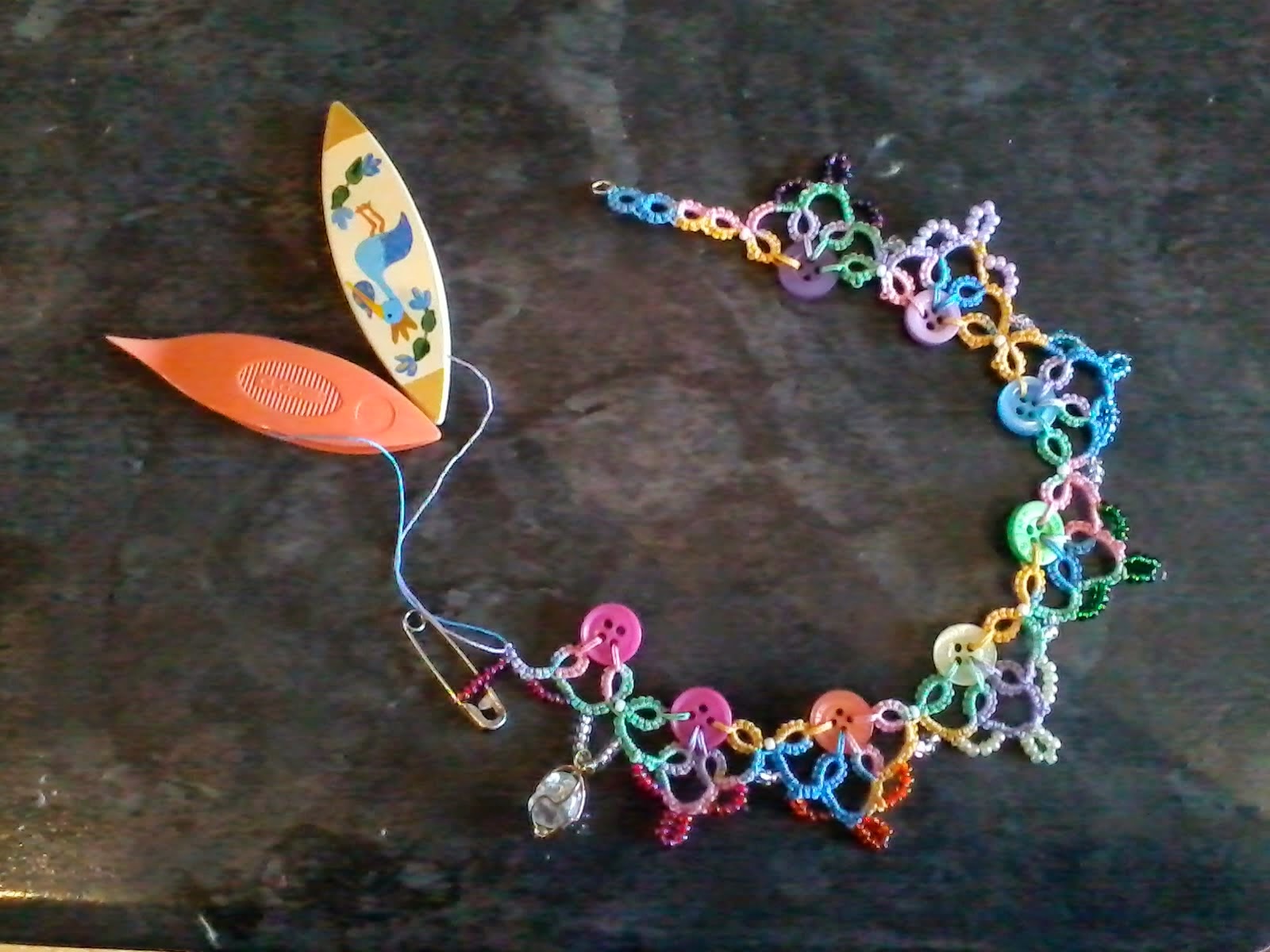 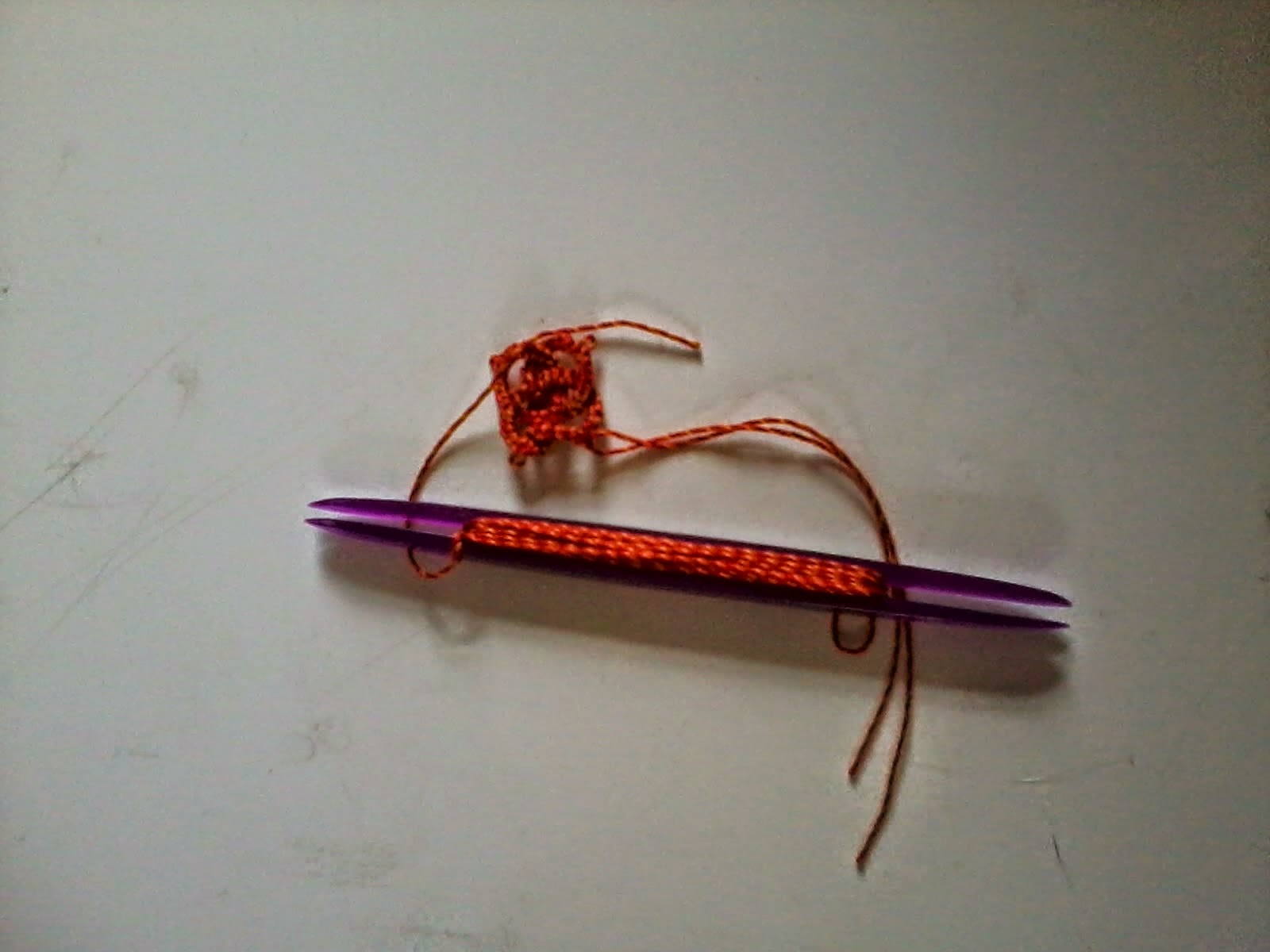 Phyllis received a request to make a Tardis and used Anne Bruvold's pattern, but was informed that a telephone box only has 2 holes, so she modified the pattern. (I thought it was a police box.) She used her own hand dyed size 80 thread for the project. 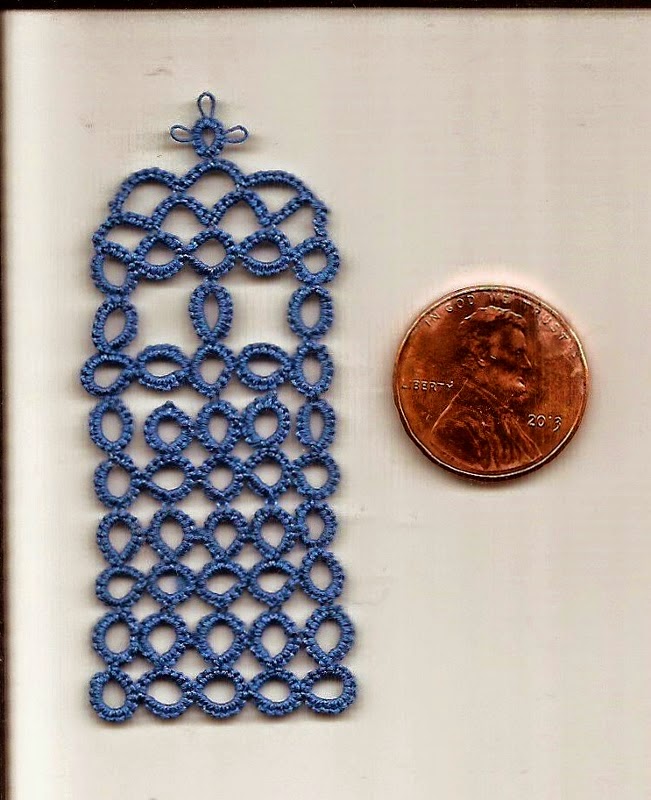 Lelia was at a local quilt show and picked up some 12 wt Sulky thread along with this hanky with the Hens and Chicks border. She added beads on the core thread to make lots of butterfly doodles to give away on International Tatting Day. She used Lizbeth size 20 in Col 139, Col 131, + Col 117; and Flora 20, Col 13 and her own pattern for these. The lovely hearts are based on Grace Tan's pattern, Small Trefoil Heart and worked in Lizbeth size 20, Col. 139. The three yellow/creme butterflies are from A Summer's Memory - Four Butterfly Patterns from Mary Maynard done in Flora 20, Color 13. 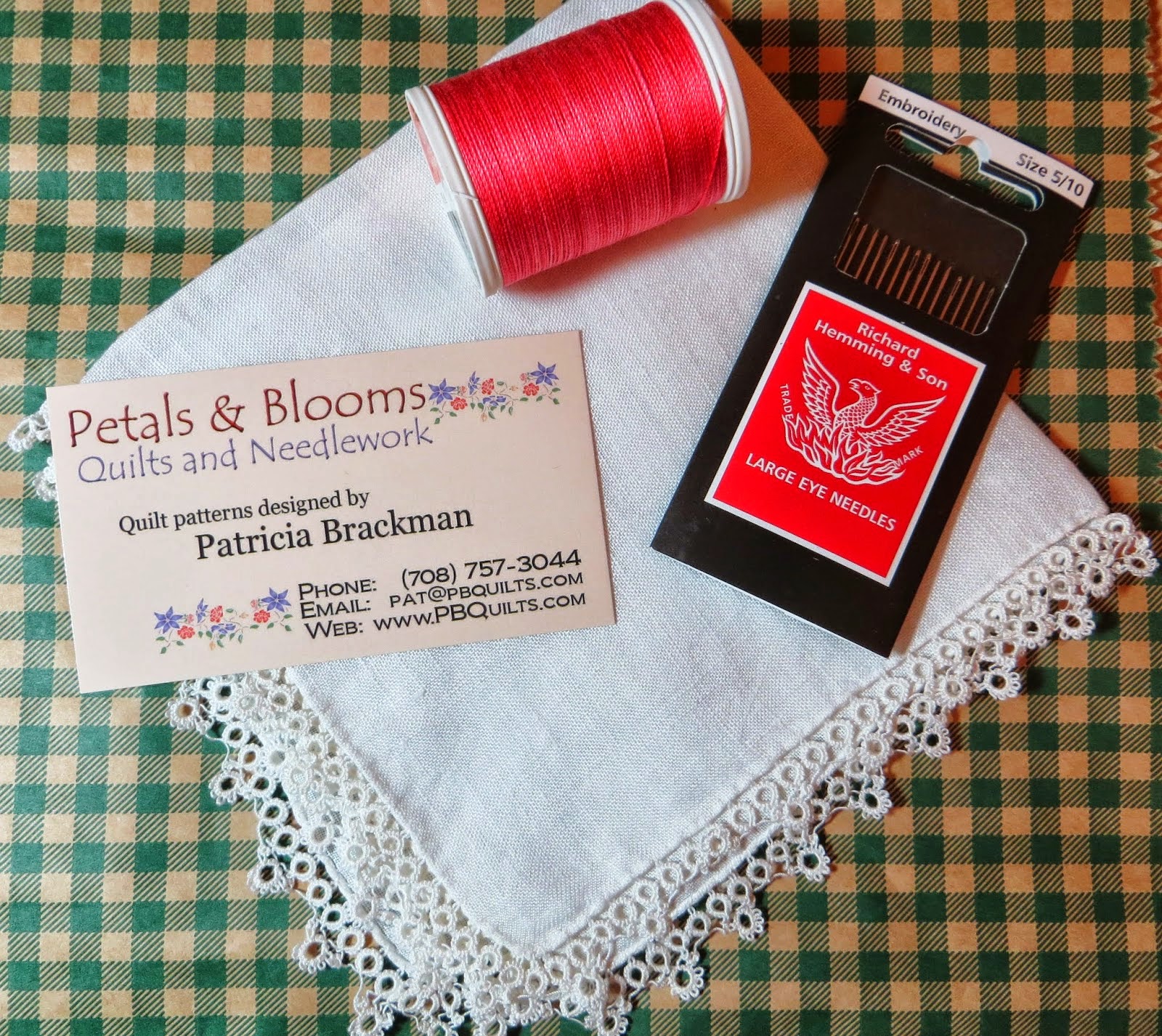 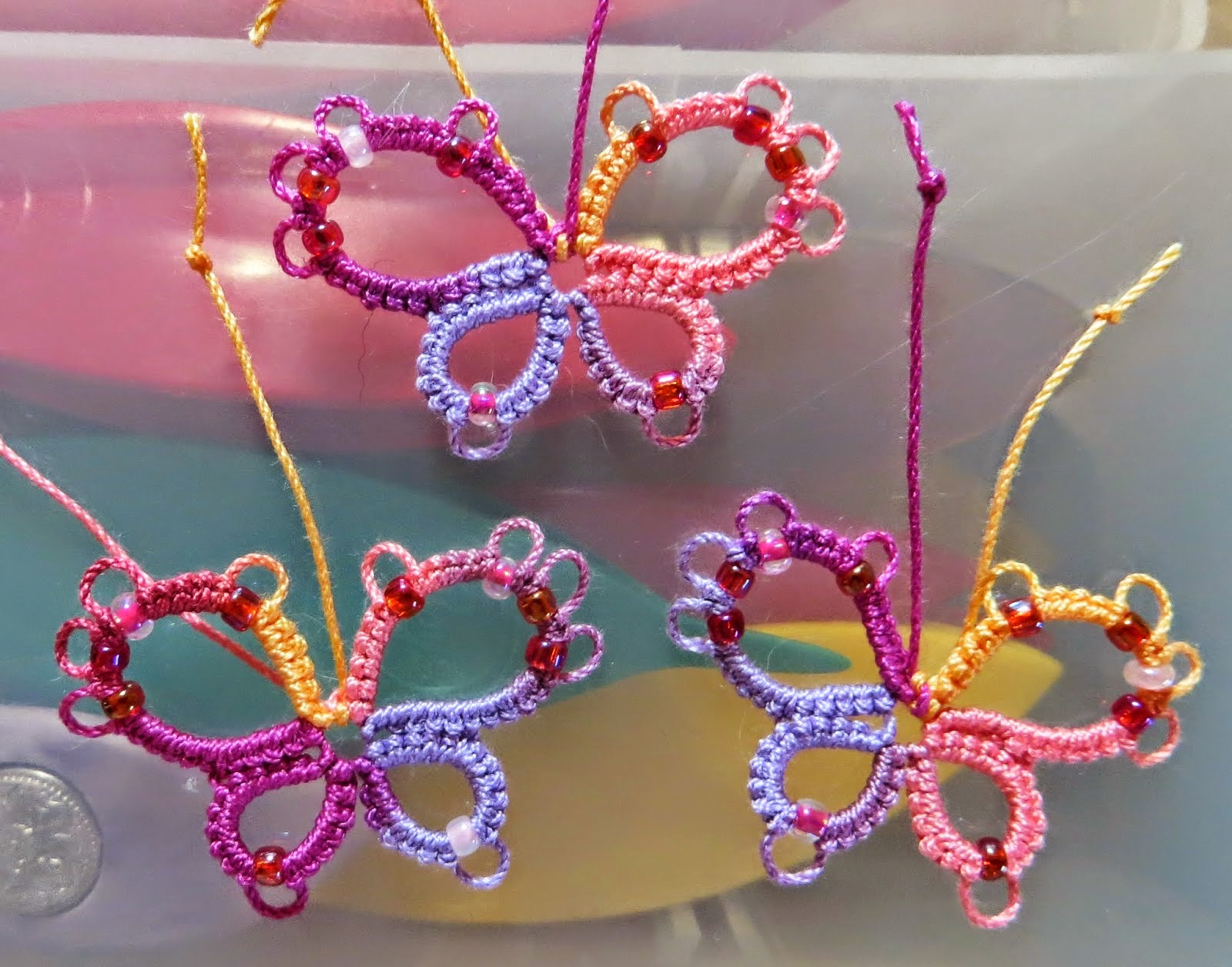 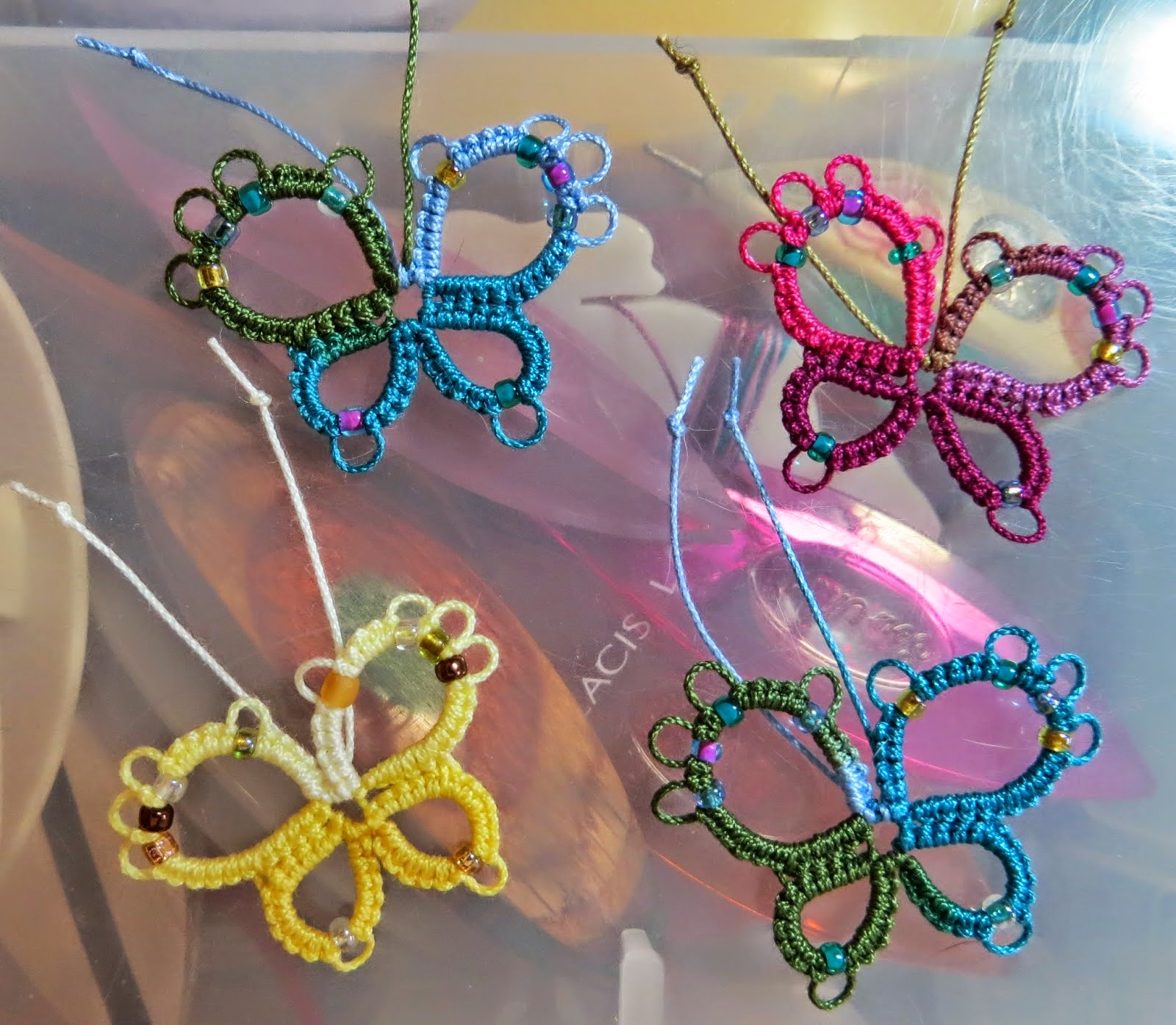 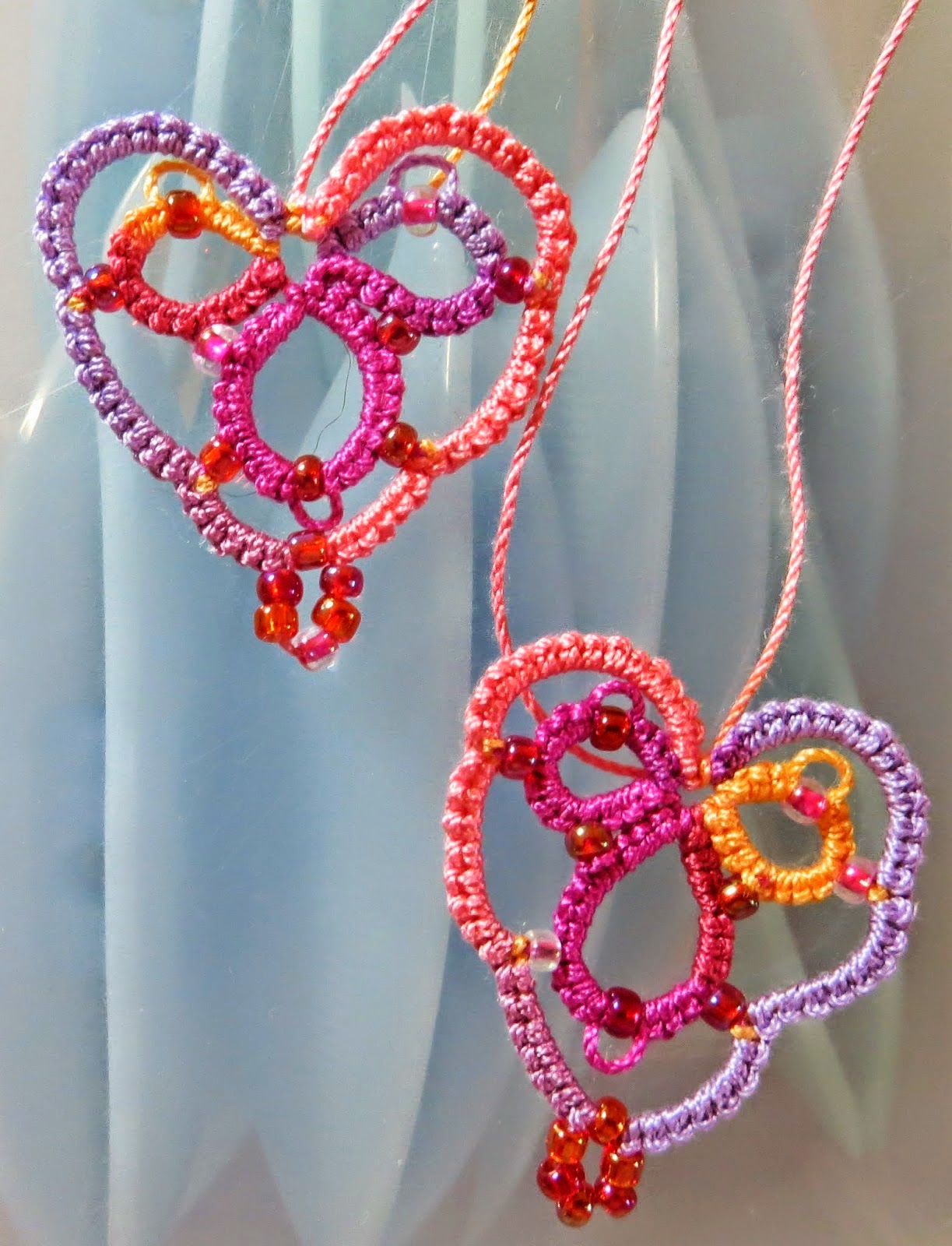 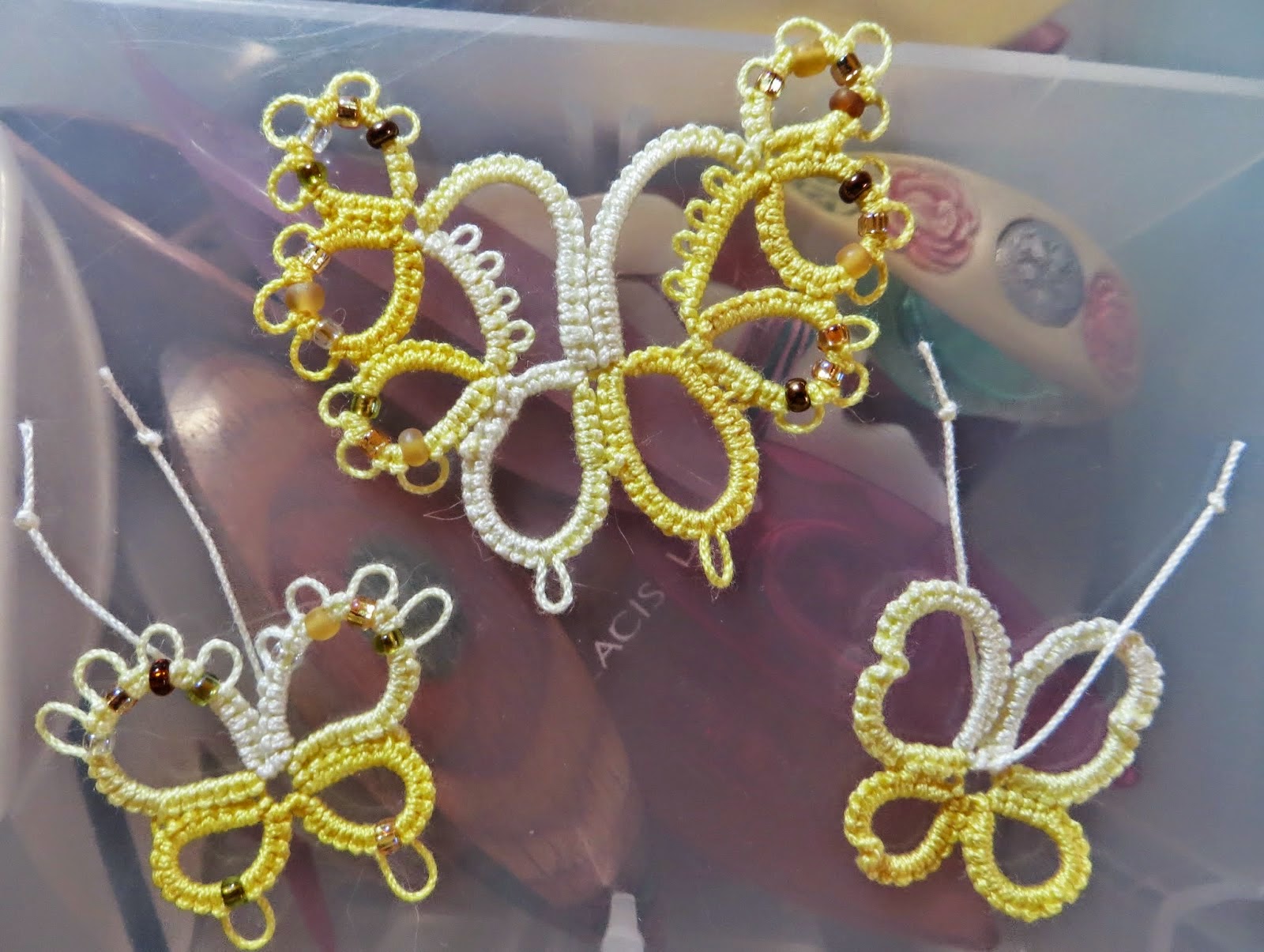 Nancy decided to celebrate International Tatting Day by going the the library to tat. She used Lizbeth size 20 Scottish Thistle to tat the Sweet Rose Snowflake pattern by Jon Yusoff. 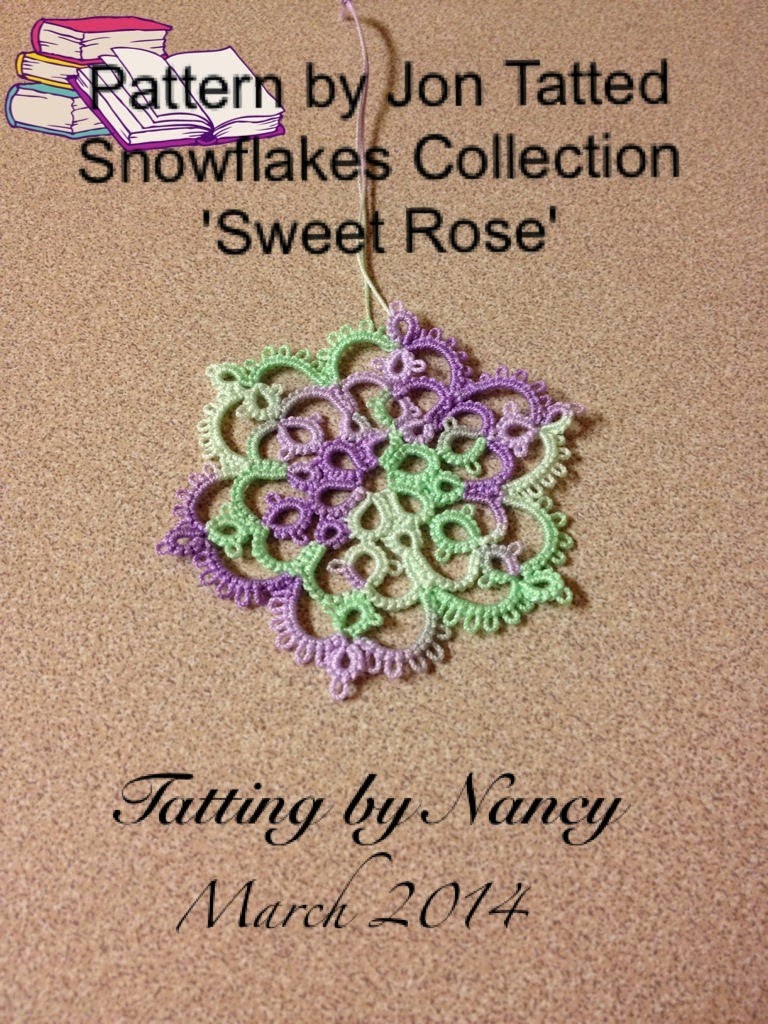 Diane's students are tatting away and getting their reward motifs. She thinks these 2 might be her fifth grade students. Diane has finished the next round of her Russian doily. Paige has finished a large ring and earned another shuttle and a bookmark. One of the boys chose this pretty pink motif, possibly for his mom. A first attempt at picots earned this eager tatter a beautiful little swan. Grace has been wanting this little tatted fairy for a long time. Owen started to learn rings today. 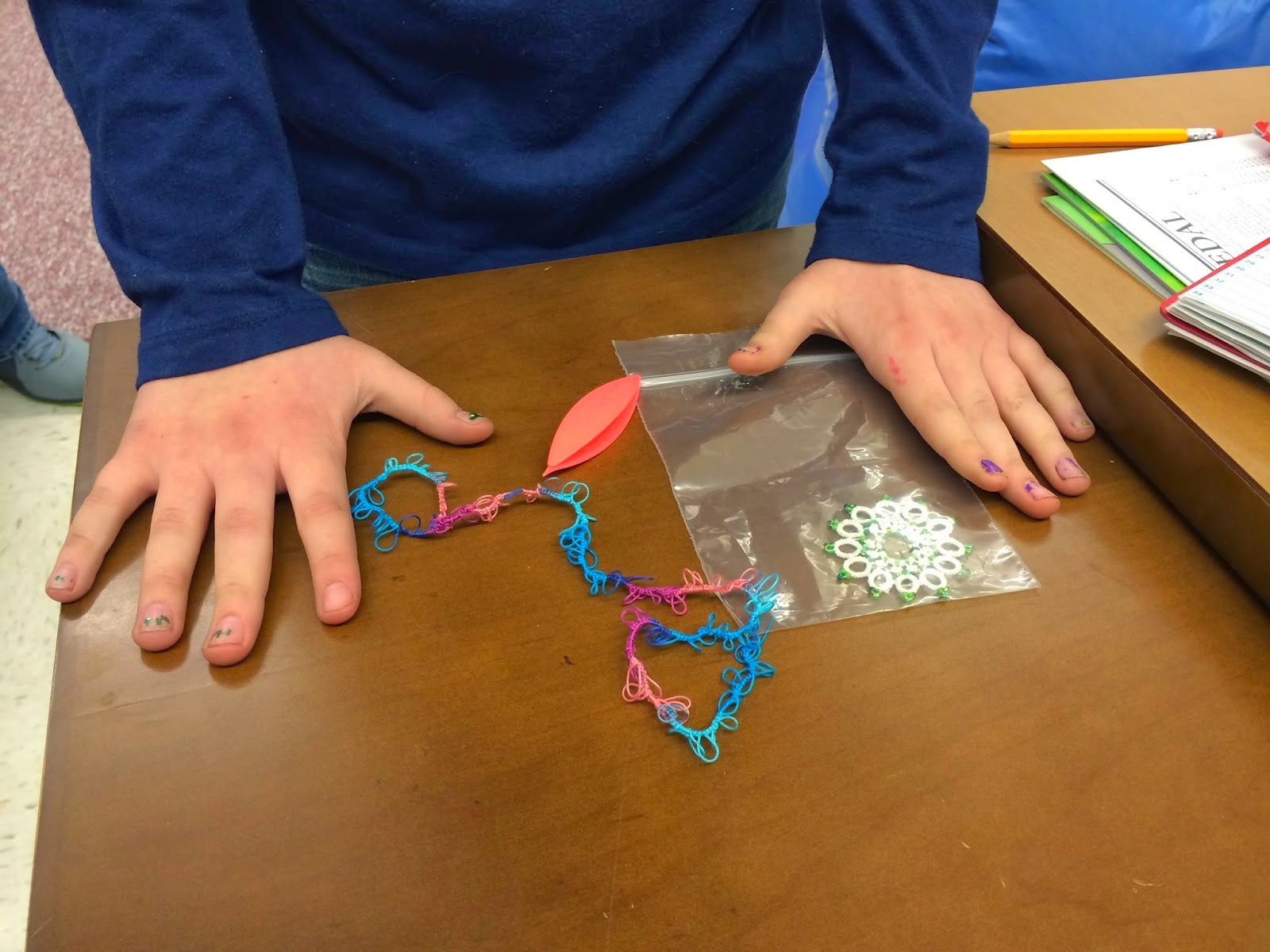 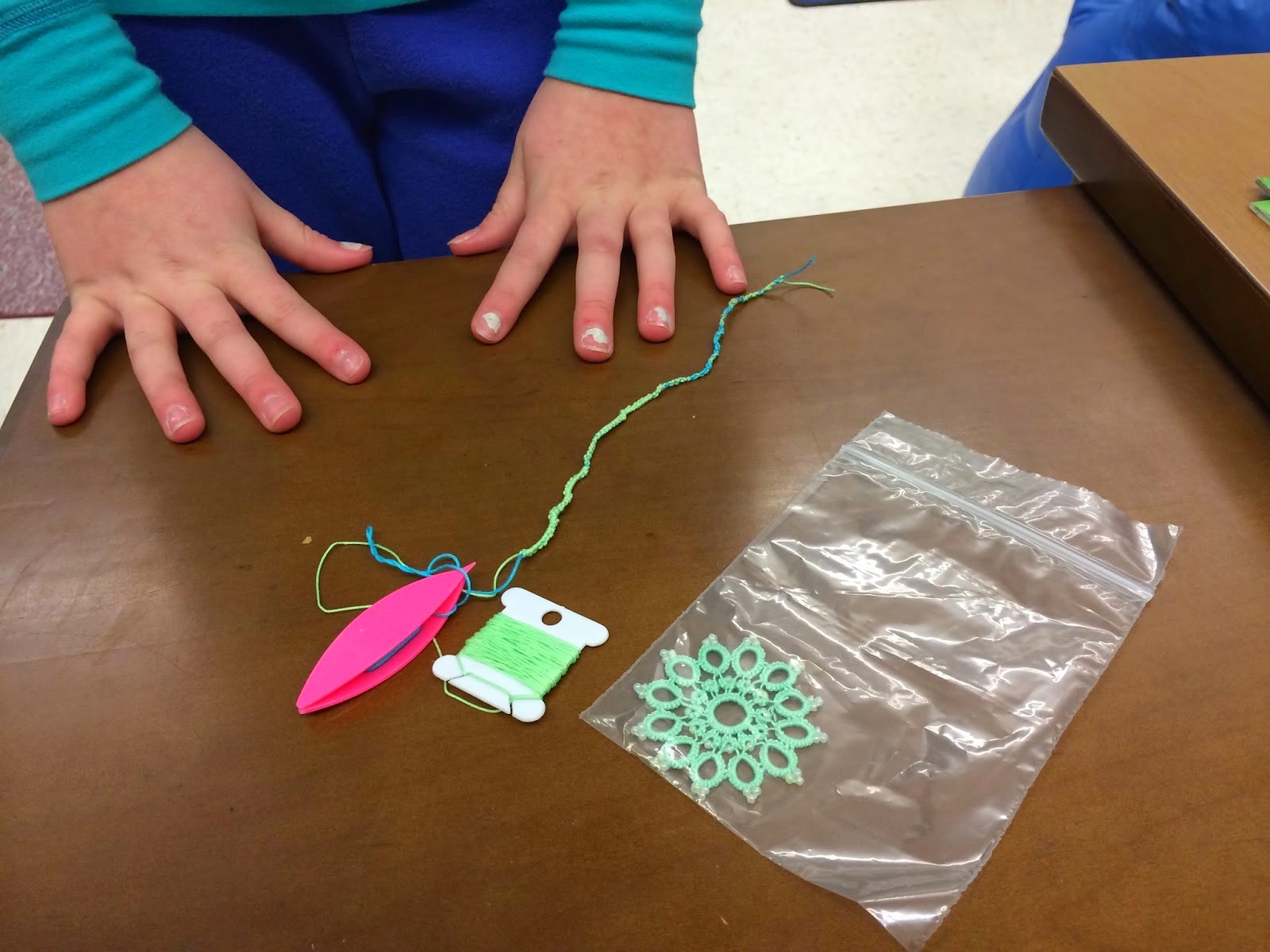 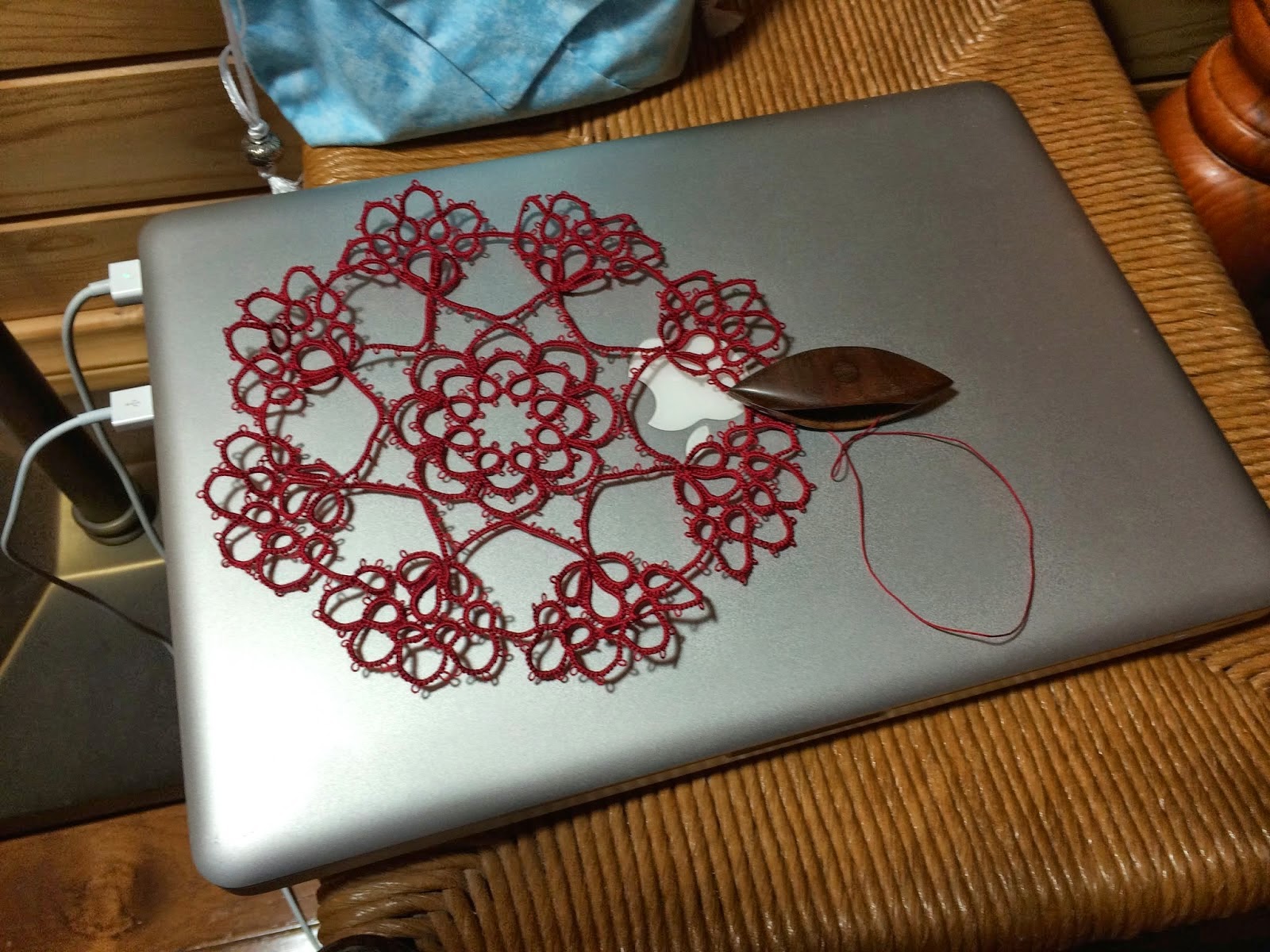 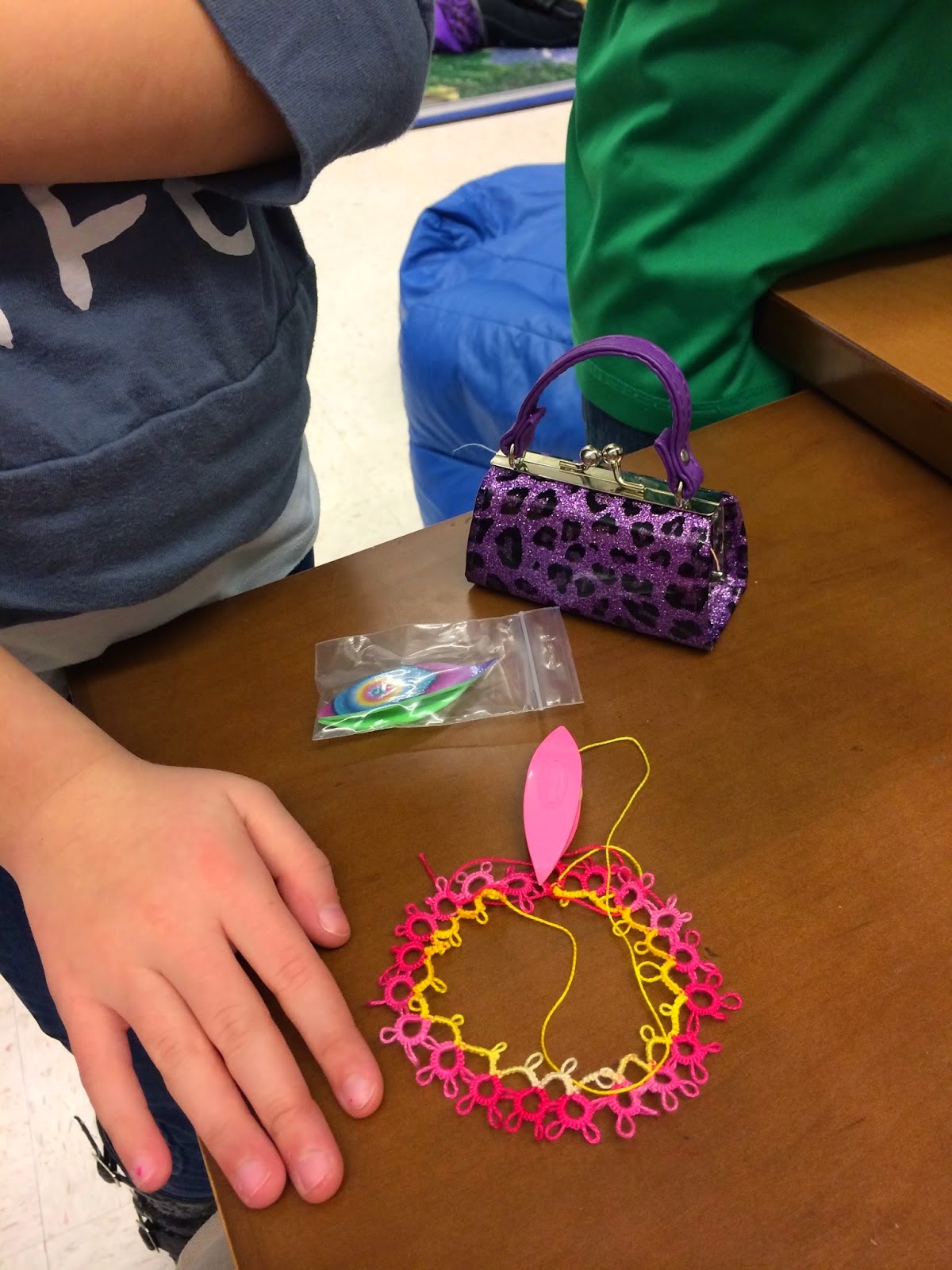 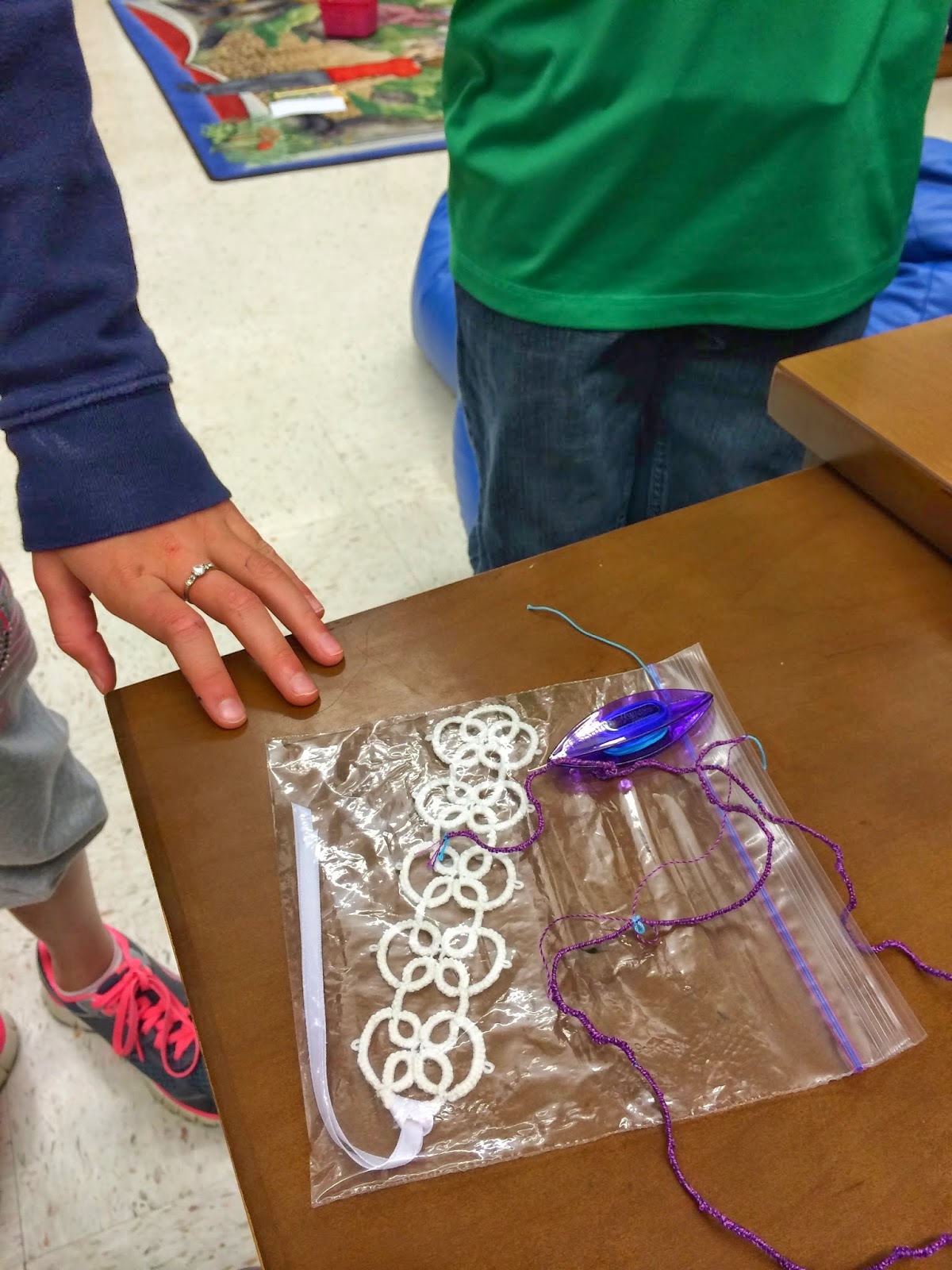 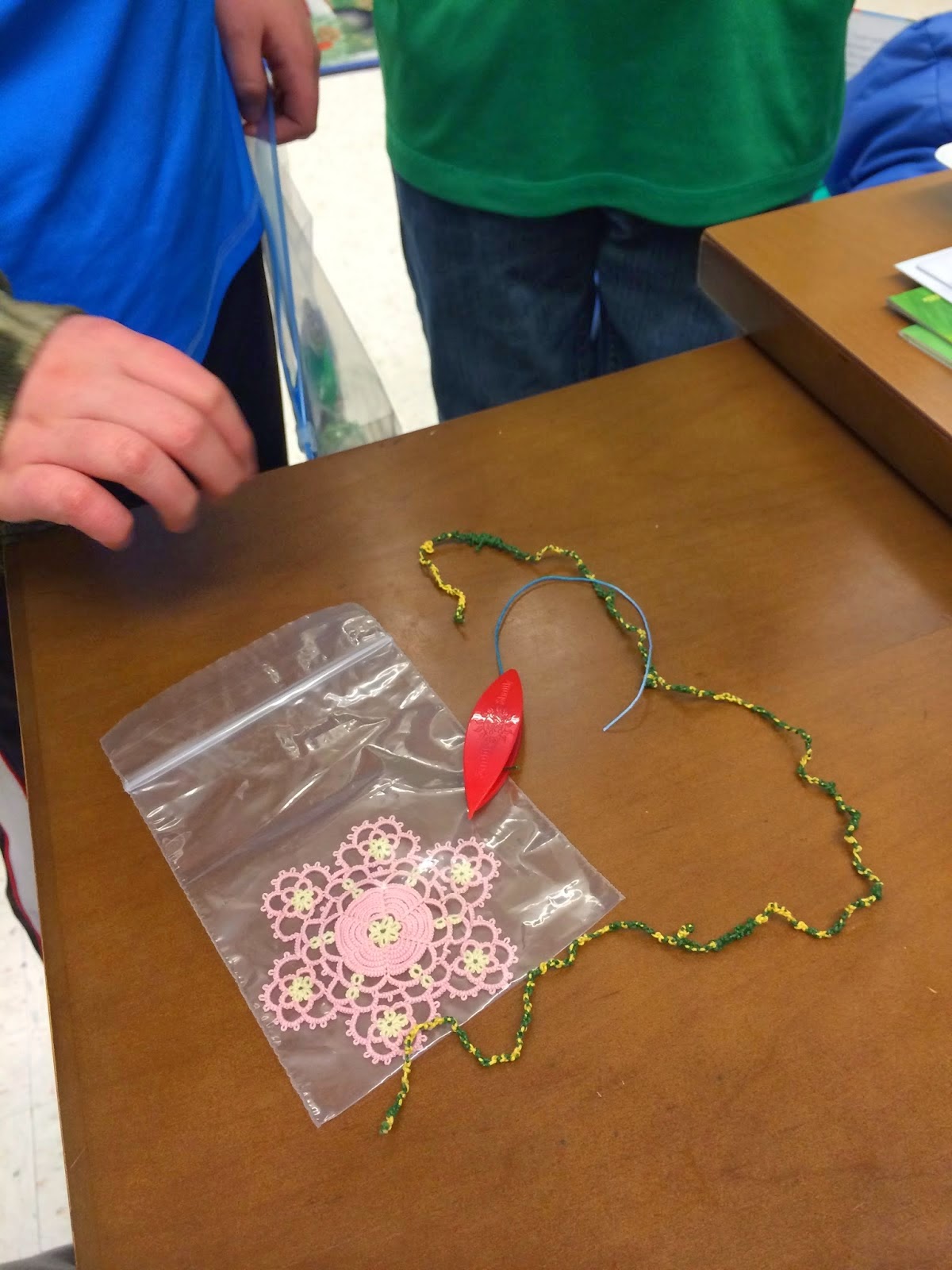 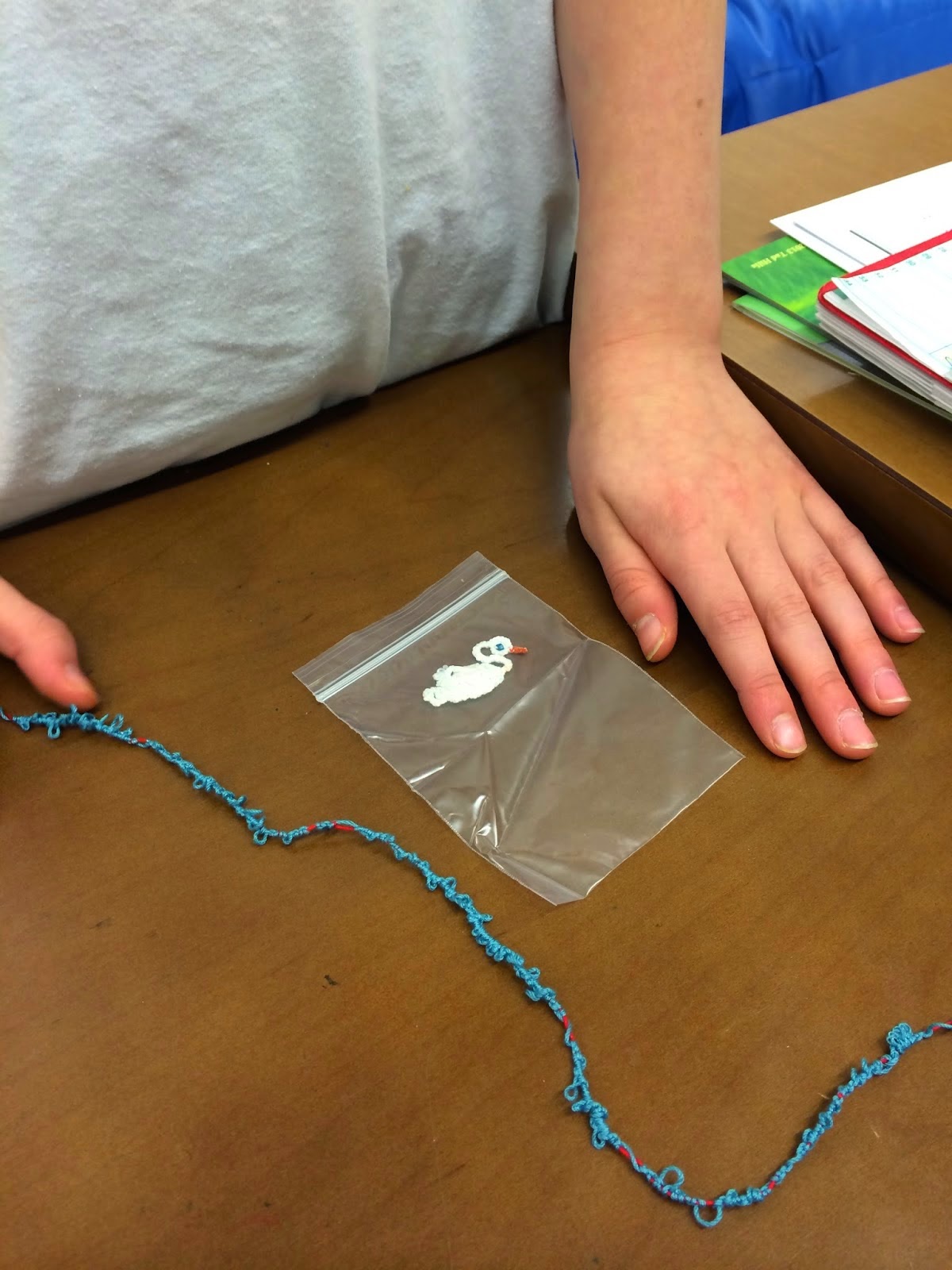 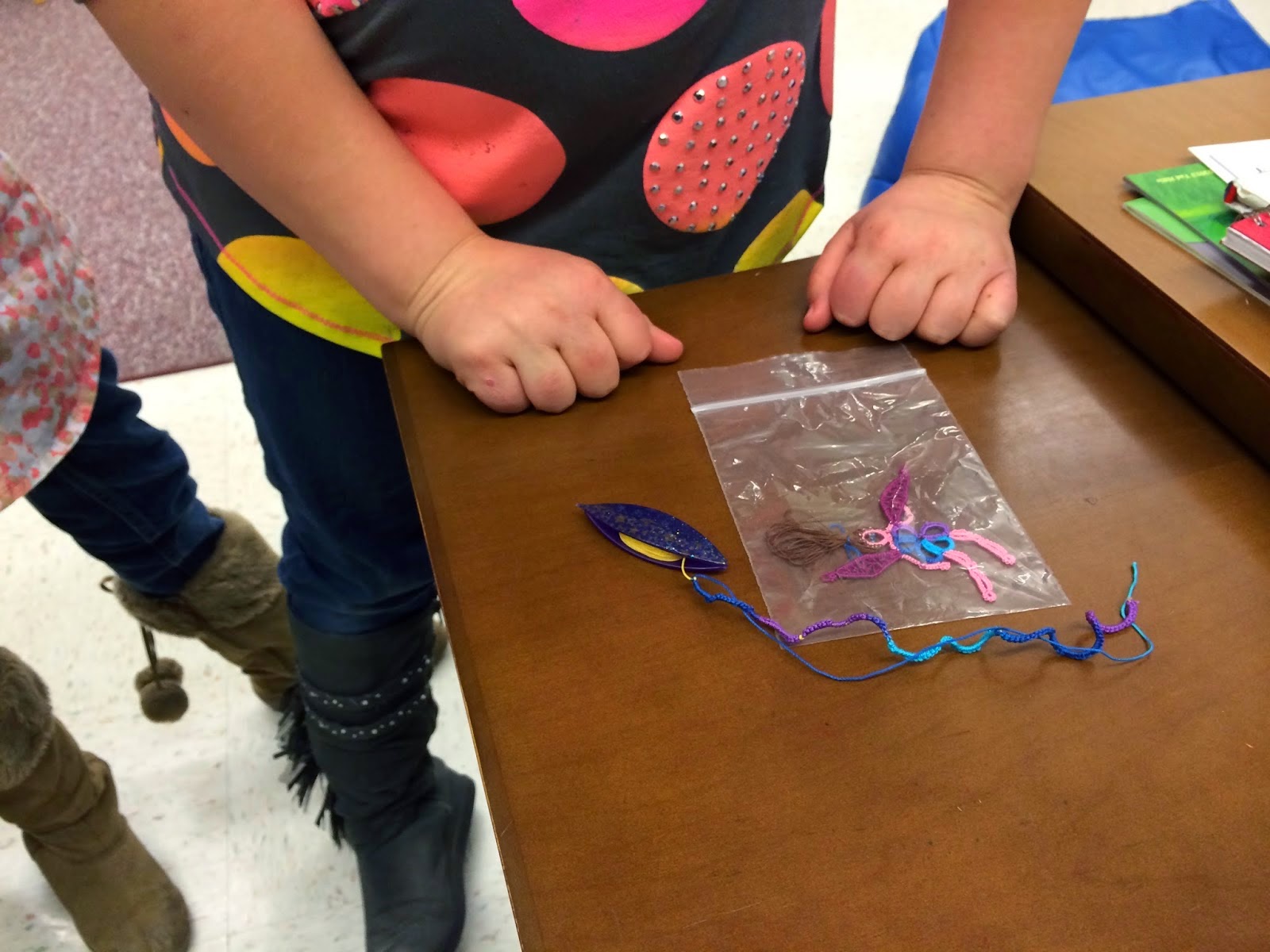 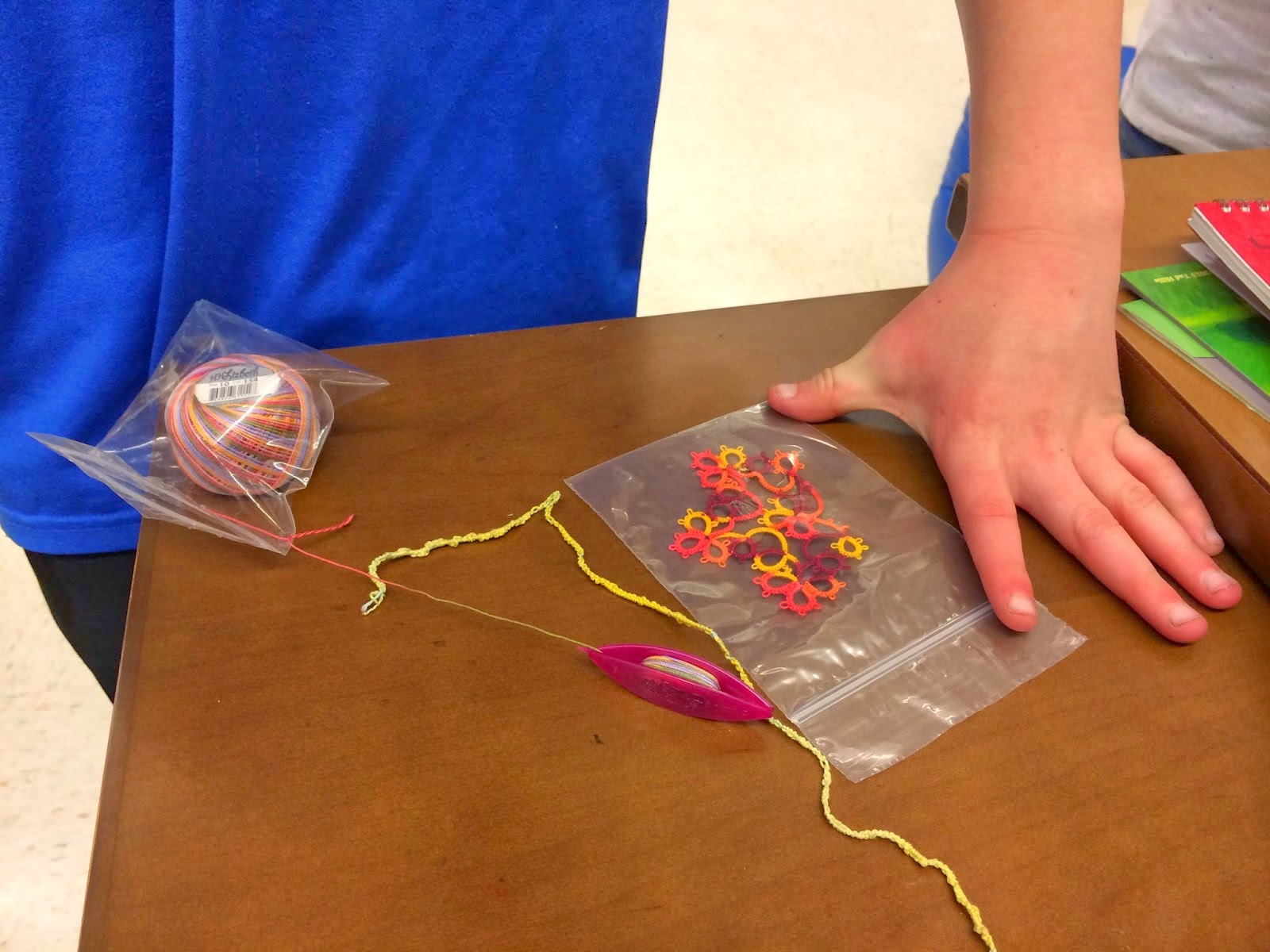 Marie received lots of tatted goodies in her exchange from the Needle Tatting Forum. The pattern from Mark, called "Hilda's 3-D Angel"  called for size 40 thread, but she used size 20 crochet thread and it is going on the top of her little Christmas tree. Irene Woo's Butterfly Heart done in Lizbeth size 20 Cranberry Bush, was made into a bookmark. 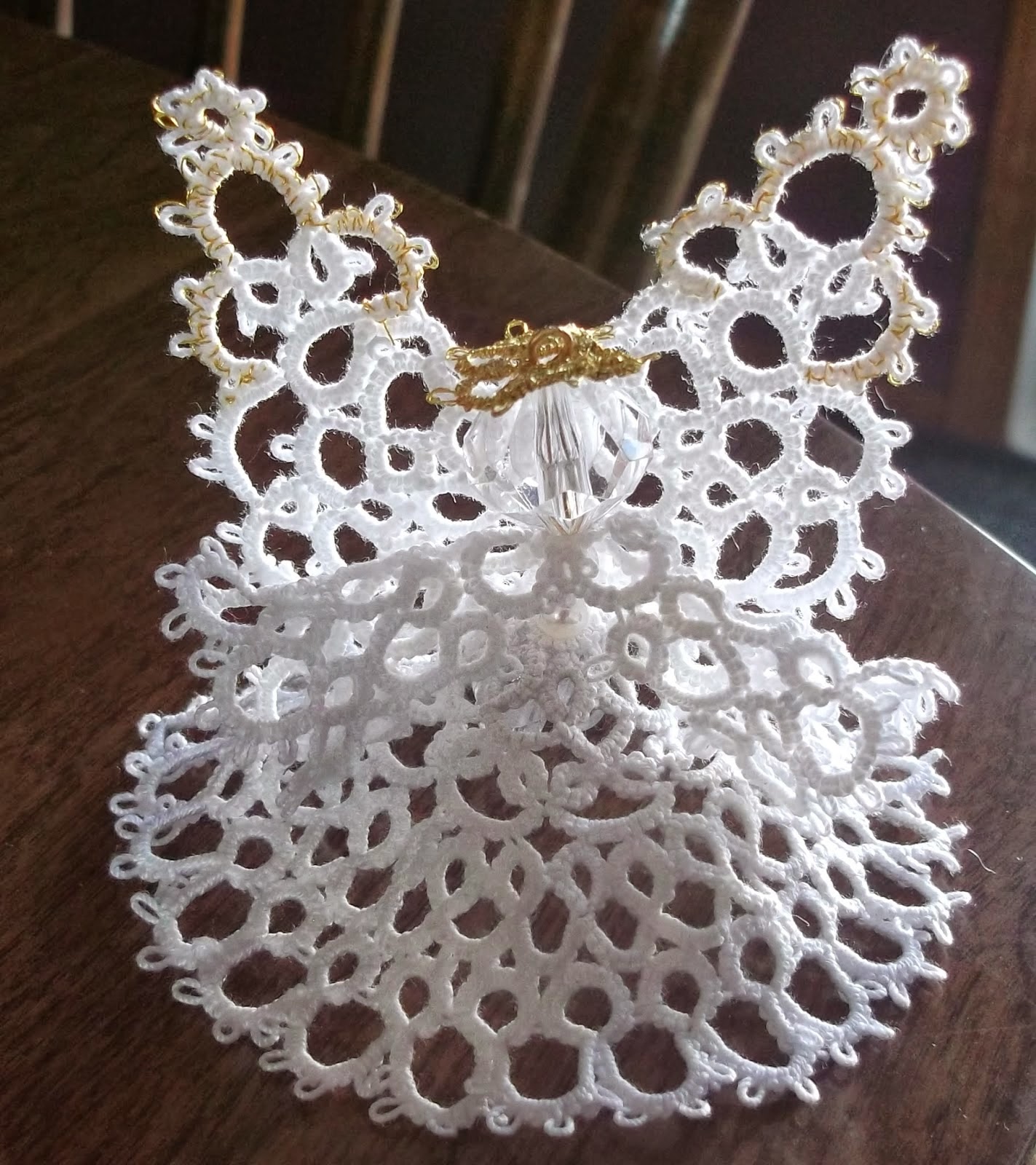 Martha had lots of fun making all those 1915 Priscilla motifs in size 20 and they made nice big pieces. Sewing down billions of picots to make a quilt square, wasn't so much fun, but it sure is pretty.

HisKid tatted the Wave bookmark pattern from Tatted Bookmarks Needle & Shuttle edited by Barbara Foster in tatted in size 40 Fairy Dust HDT and it will make her a nice bracelet.

Wanda tatted various paperclip bookmarks, including 'Dove' by JoAnn Stearns, 'Little Fishies' by Sharon Albers, her own 'Bunny Face' on her Patterns page, her 'Basket Paperclip Doodle' also on her Patterns page and 'Butterfly' from an anonymous source along with a decorated button  doodle and a Flowers doodle. She didn't see a Basket doodle, so this one she made herself. 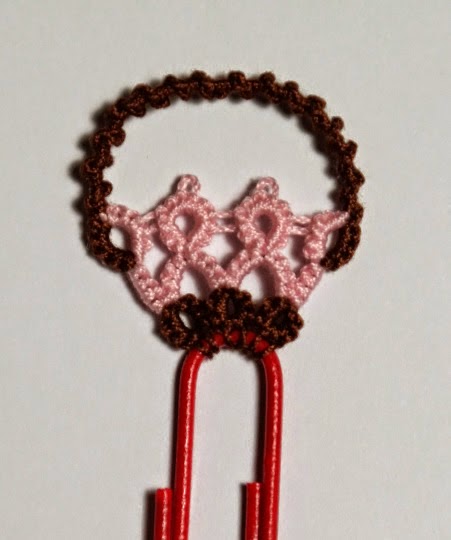 Thanks for posting all these, Sharon! I love seeing all our friends so busy with their tatting, and I HAVE made friends because of your blog.