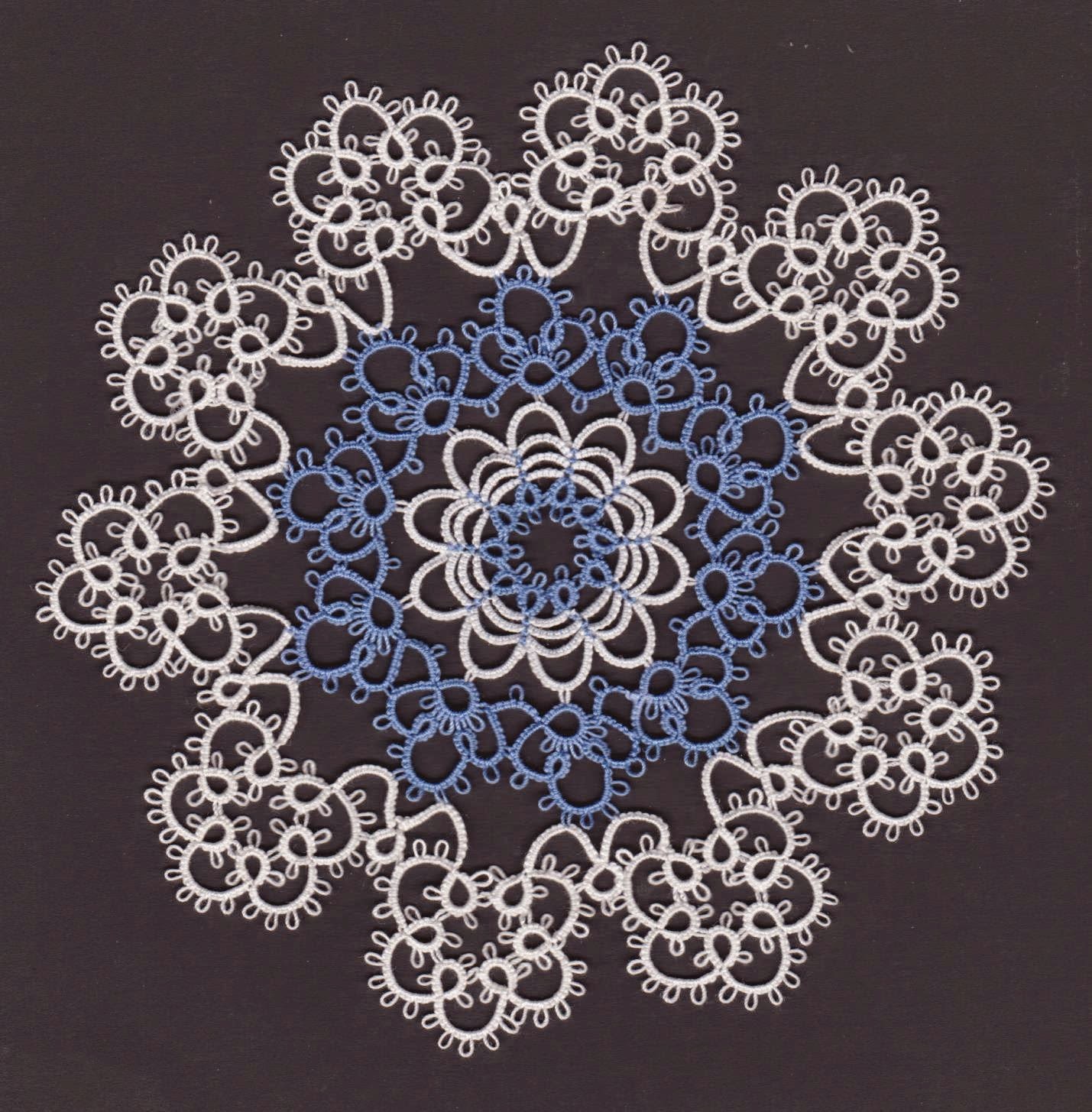 Stephanie finally managed to get a picture of the finished flower doily from Jan Stawasz' first book. 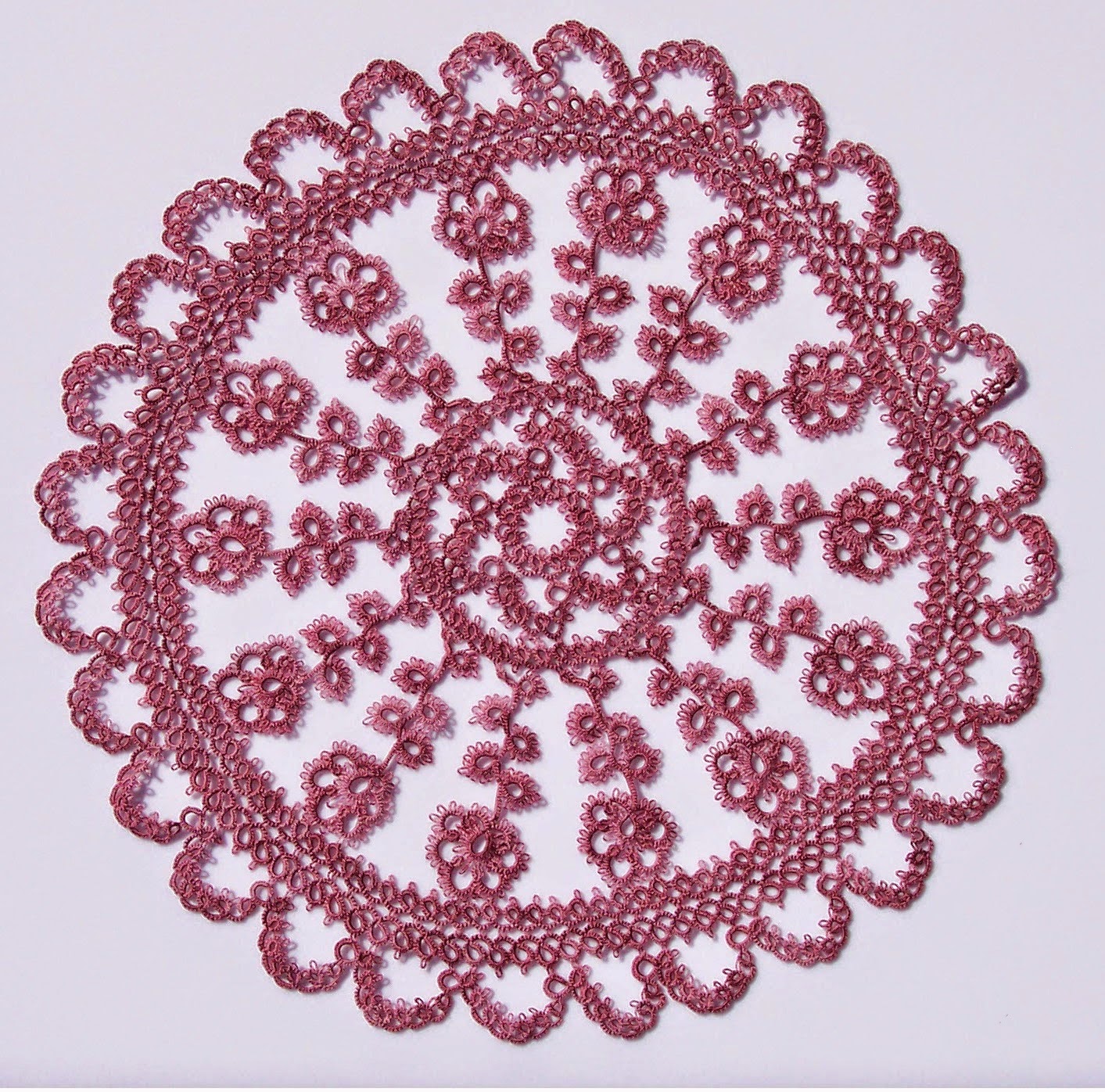 Sue has finished her necklace which will look good with summer T-shirts. She has started joining together the motifs for her hat. Working with motifs means that there are a lot of endings and beginnings and the need to keep more full shuttles on hand to replace the ones that empty. She's already on her fifth motif. 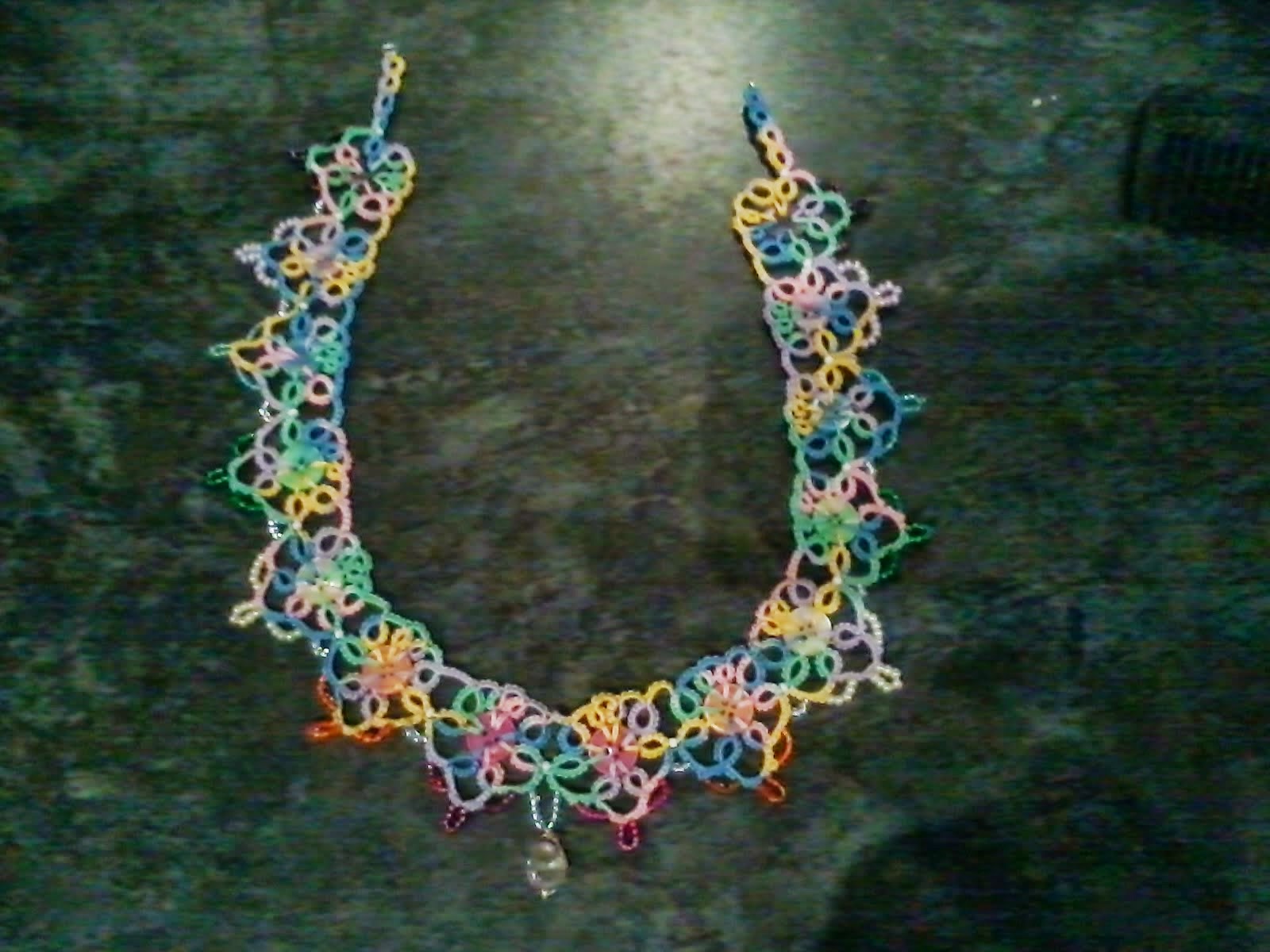 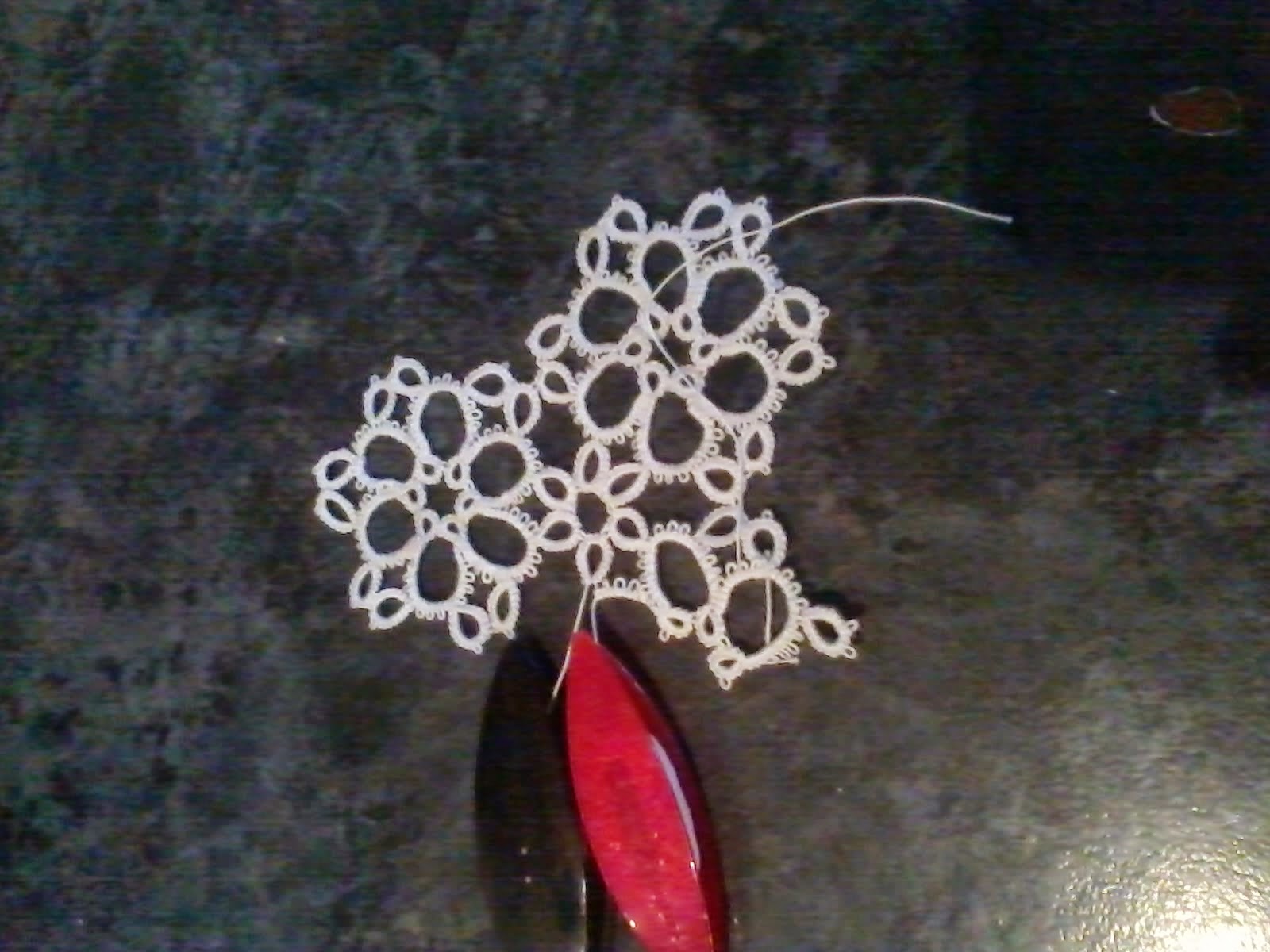 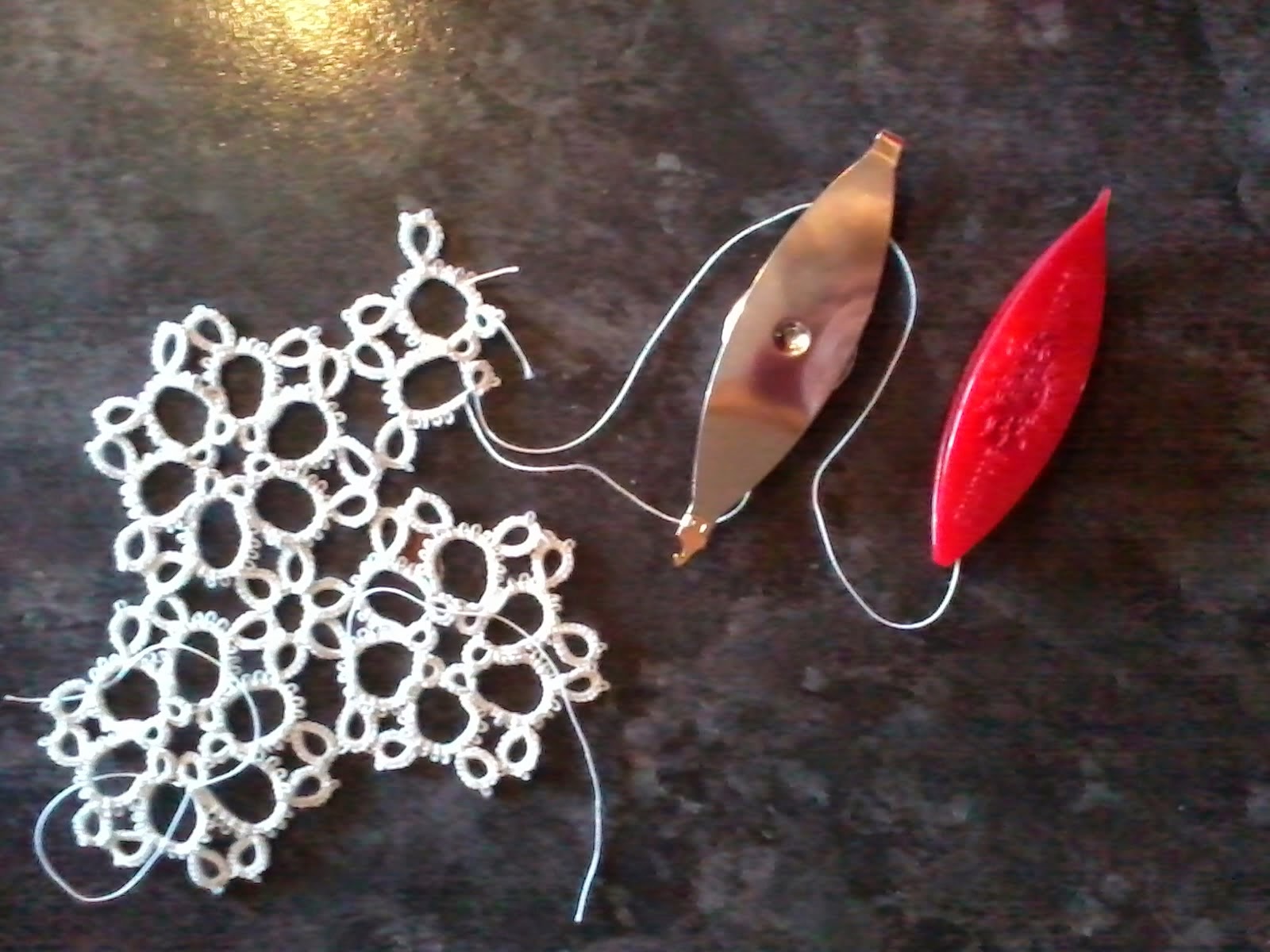 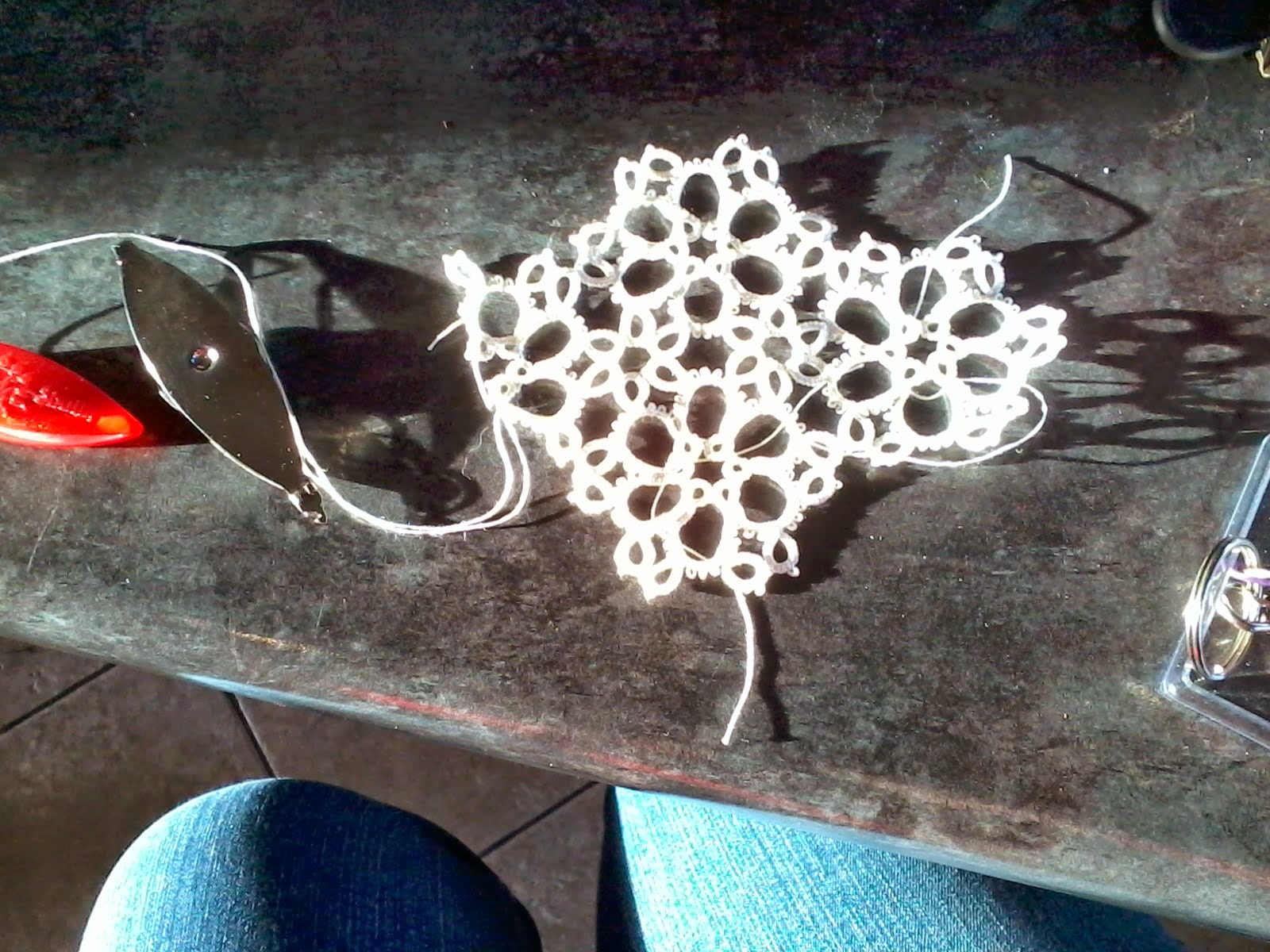 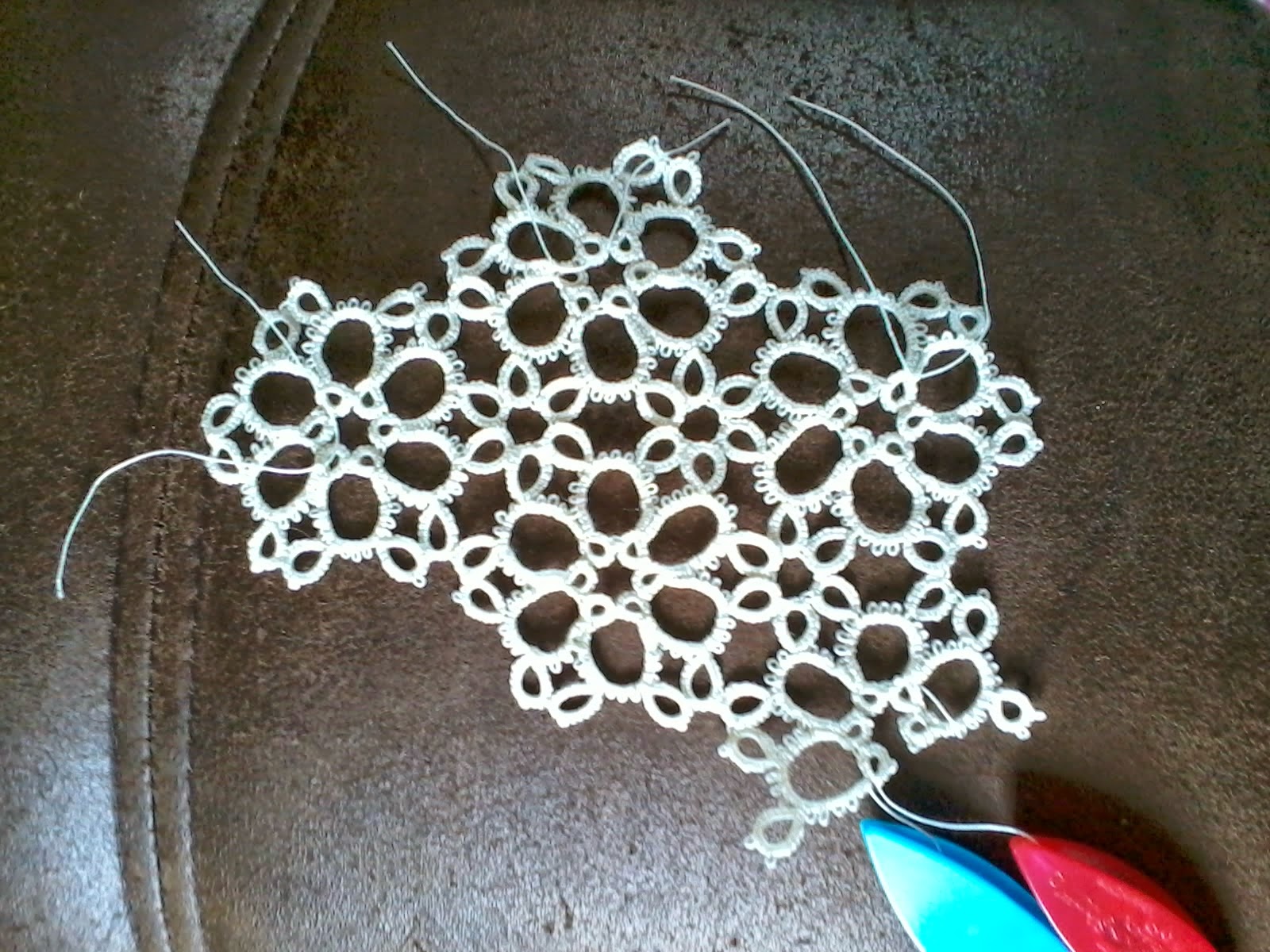 mb duke got bored working on this round of the doily which has multiple repeats and twice she forgot to join the 6th ring to the 1st ring. She put it aside to tat this lovely cross from the book Tatted Bookmarks - Cross Shaped by Lena Bjorn done in Lizbeth size 40 Arctic Waters and Fern Green Medium. Then she worked on some flowers by Jan Stawasz from his book Tatted Treasures with yellow centers in Lemon Yellow light and the bright pink petals in Altin Basik #358 and stems of Christmas green. 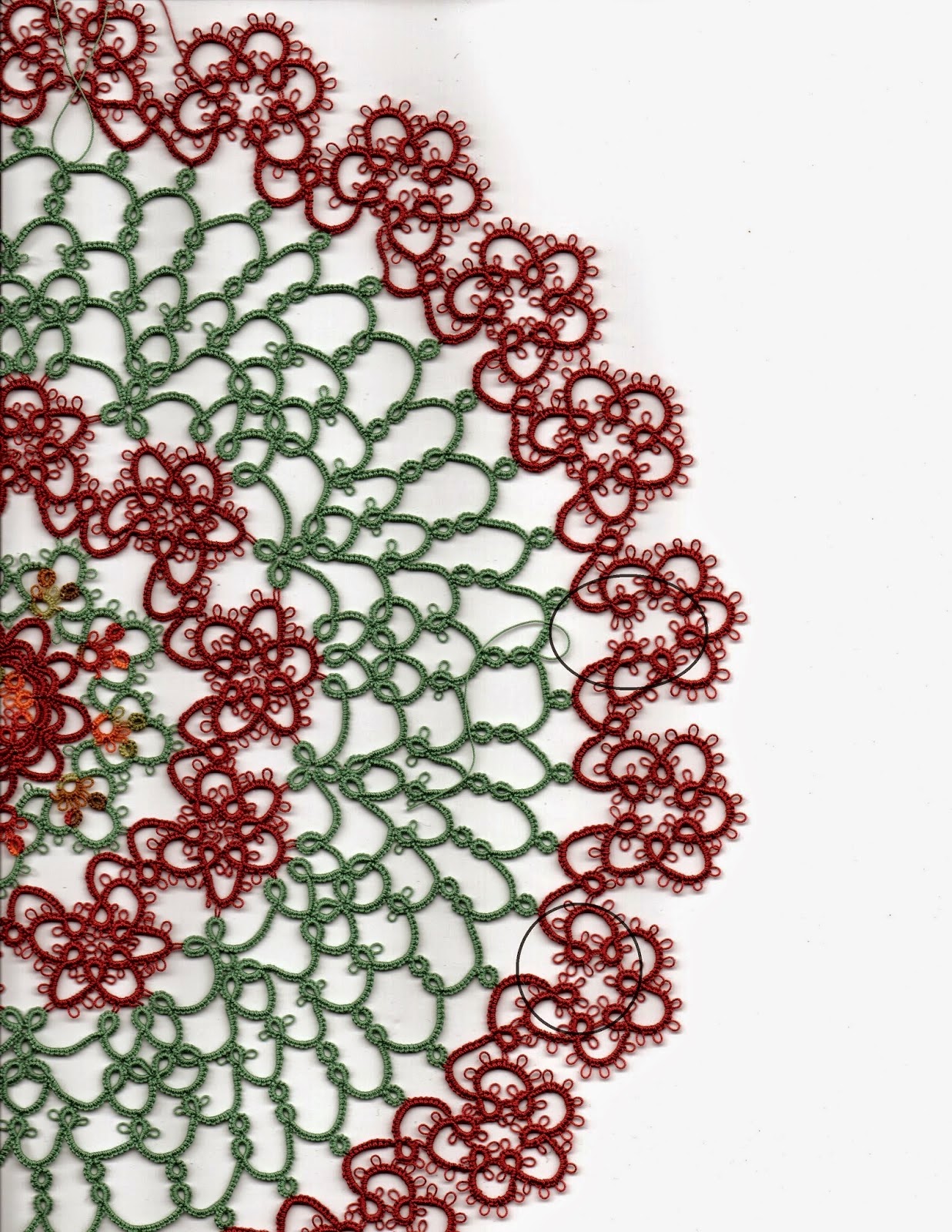 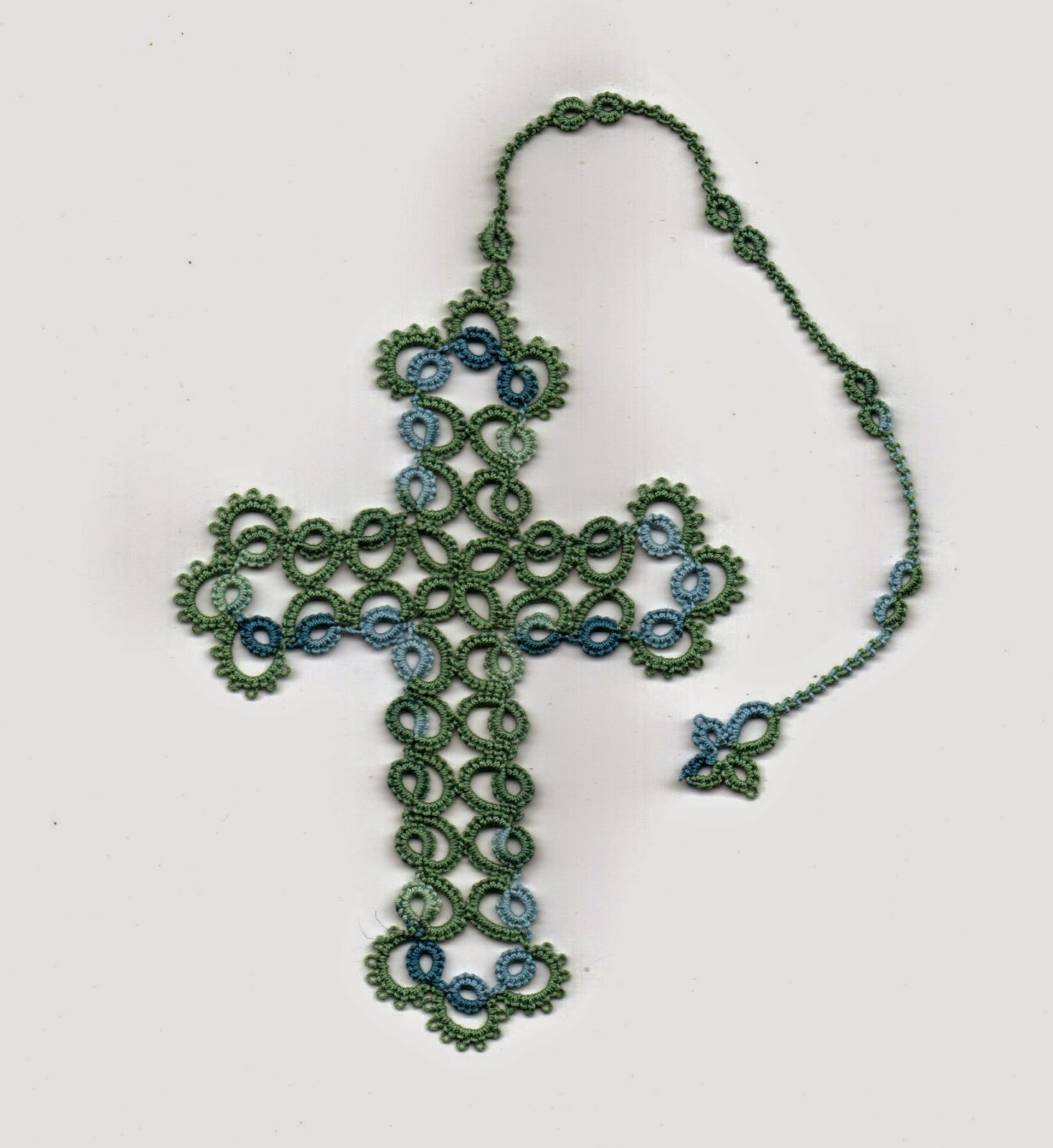 Nancy used Mark Myers pattern to tat bunnies; one in vanilla and one in chocolate. 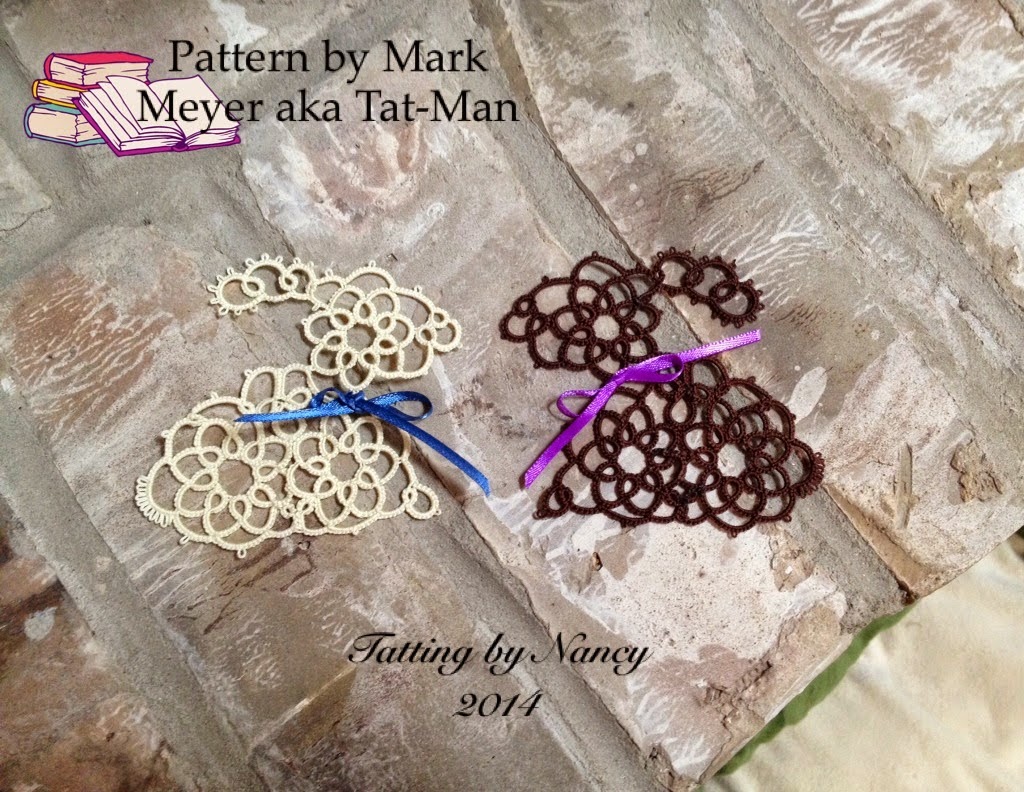 Diane has the Russian doily finished in Victorian Red which is a lovely colour for the design. She has been admiring Marilee Rocklee's Arches doily and finally took the plunge, working again in Lizbeth Victorian Red. Her students are working away perfecting their chains and picots. Diane has the next round of the Arches doily done. Her students are still tatting away on chains but Paige finished another motif and Diane showed how to block it. 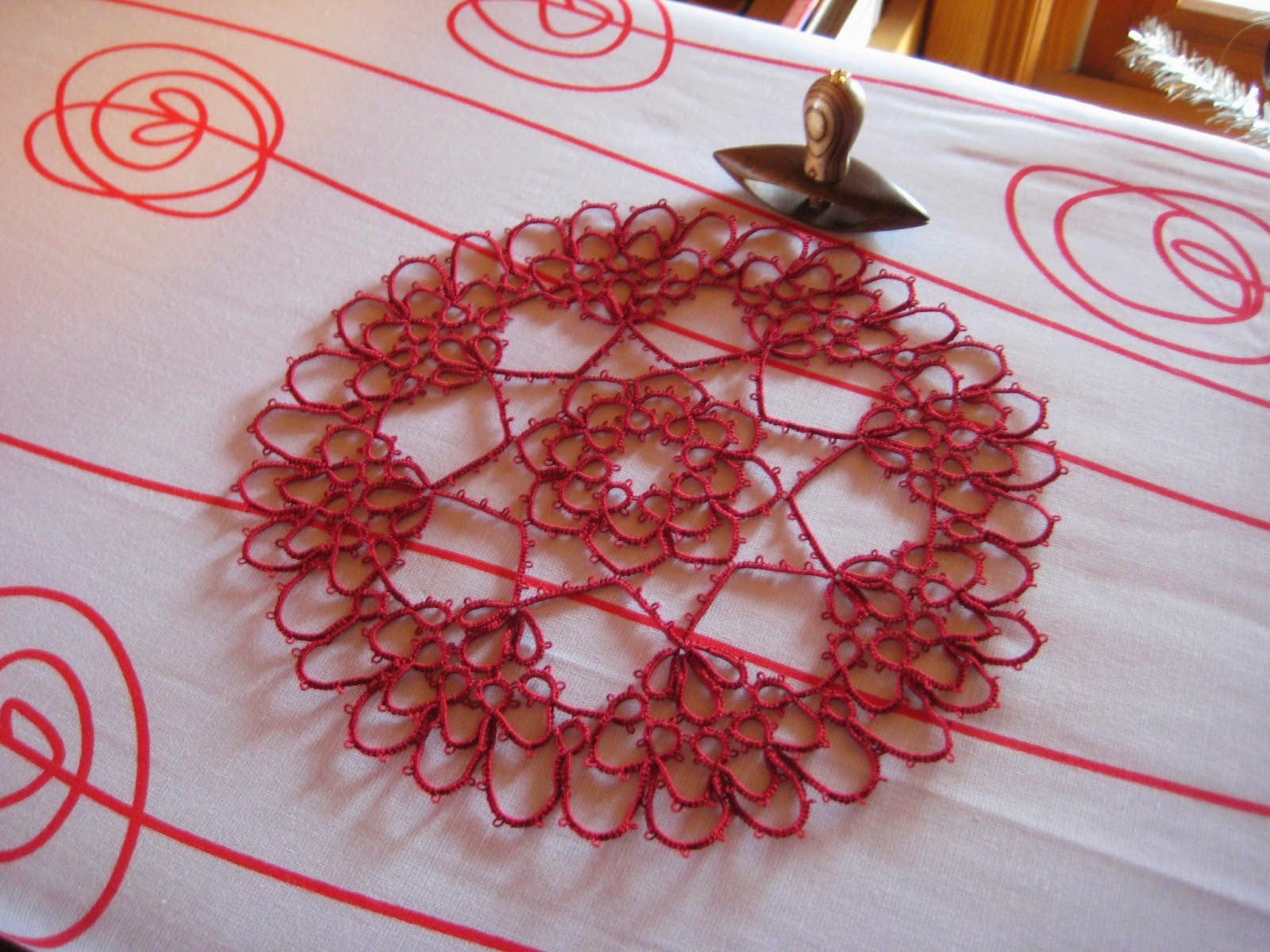 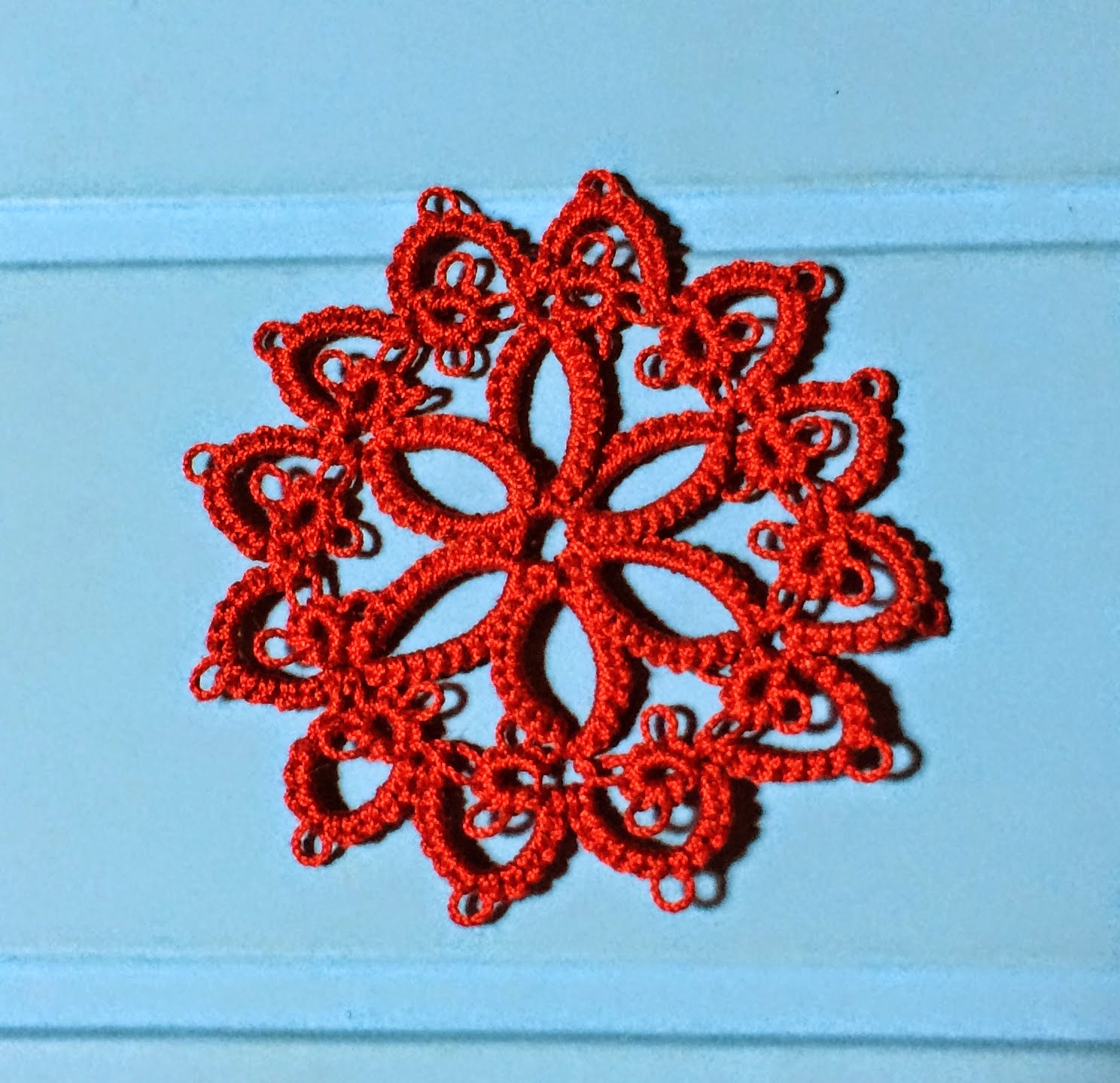 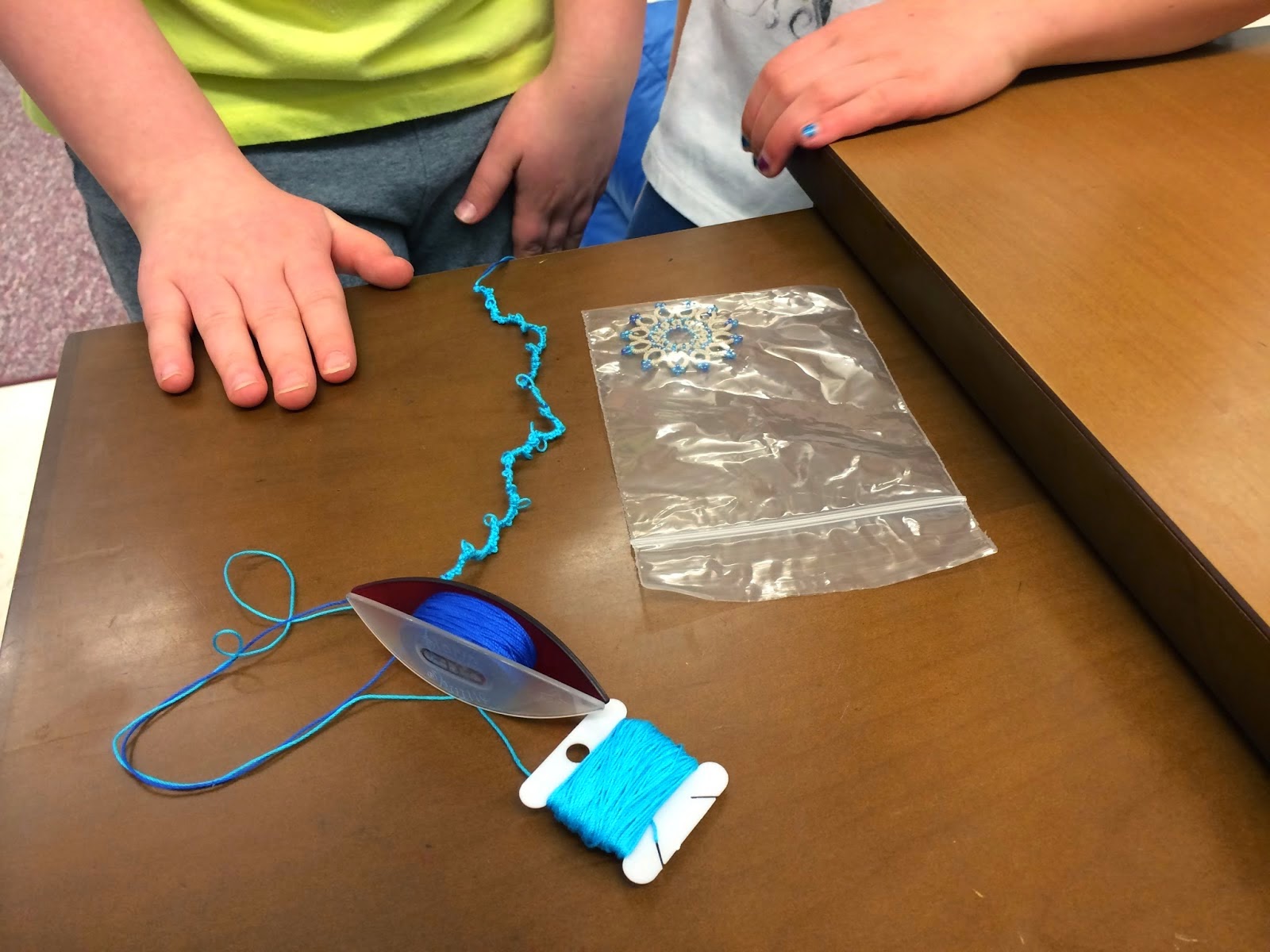 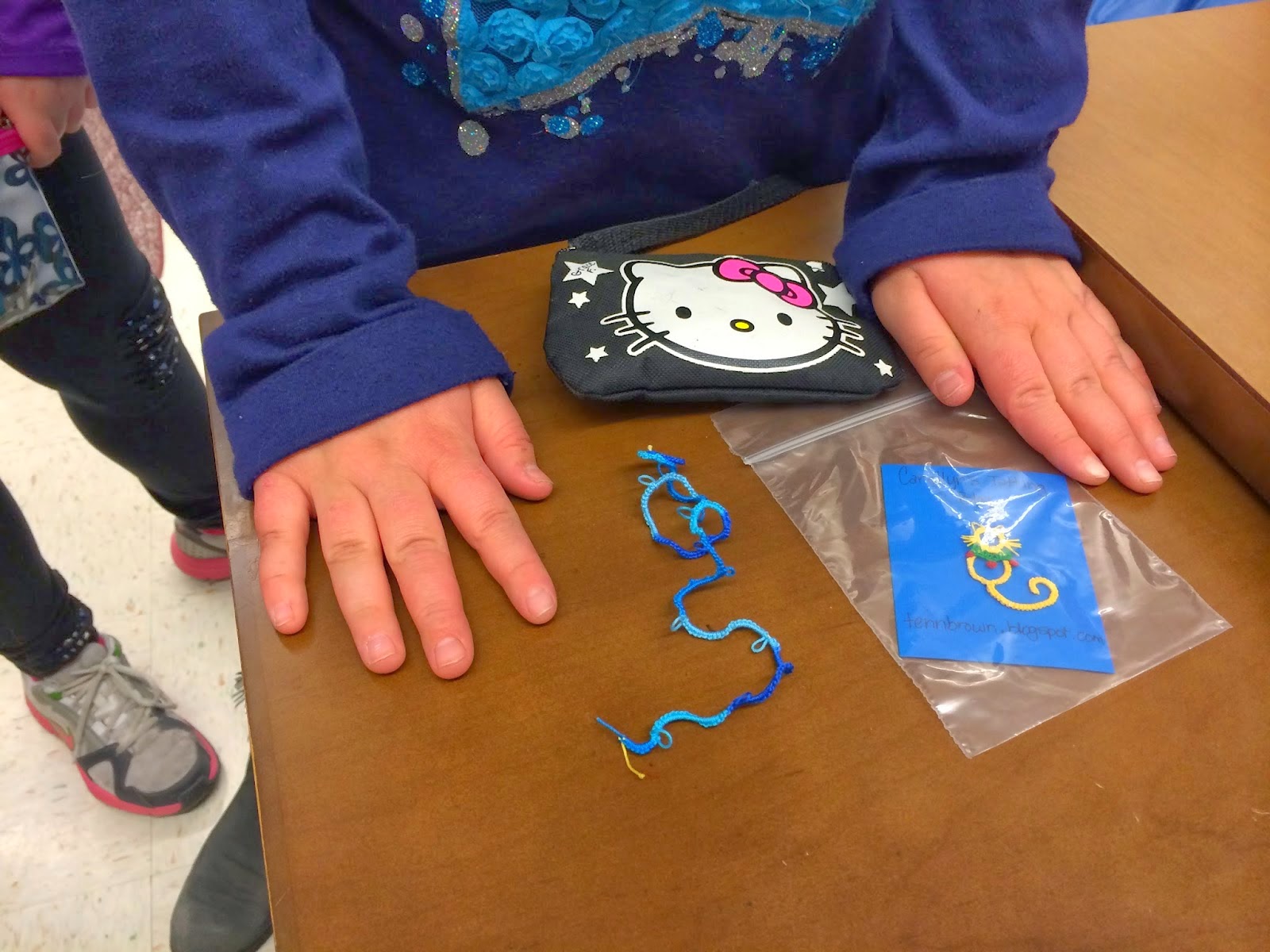 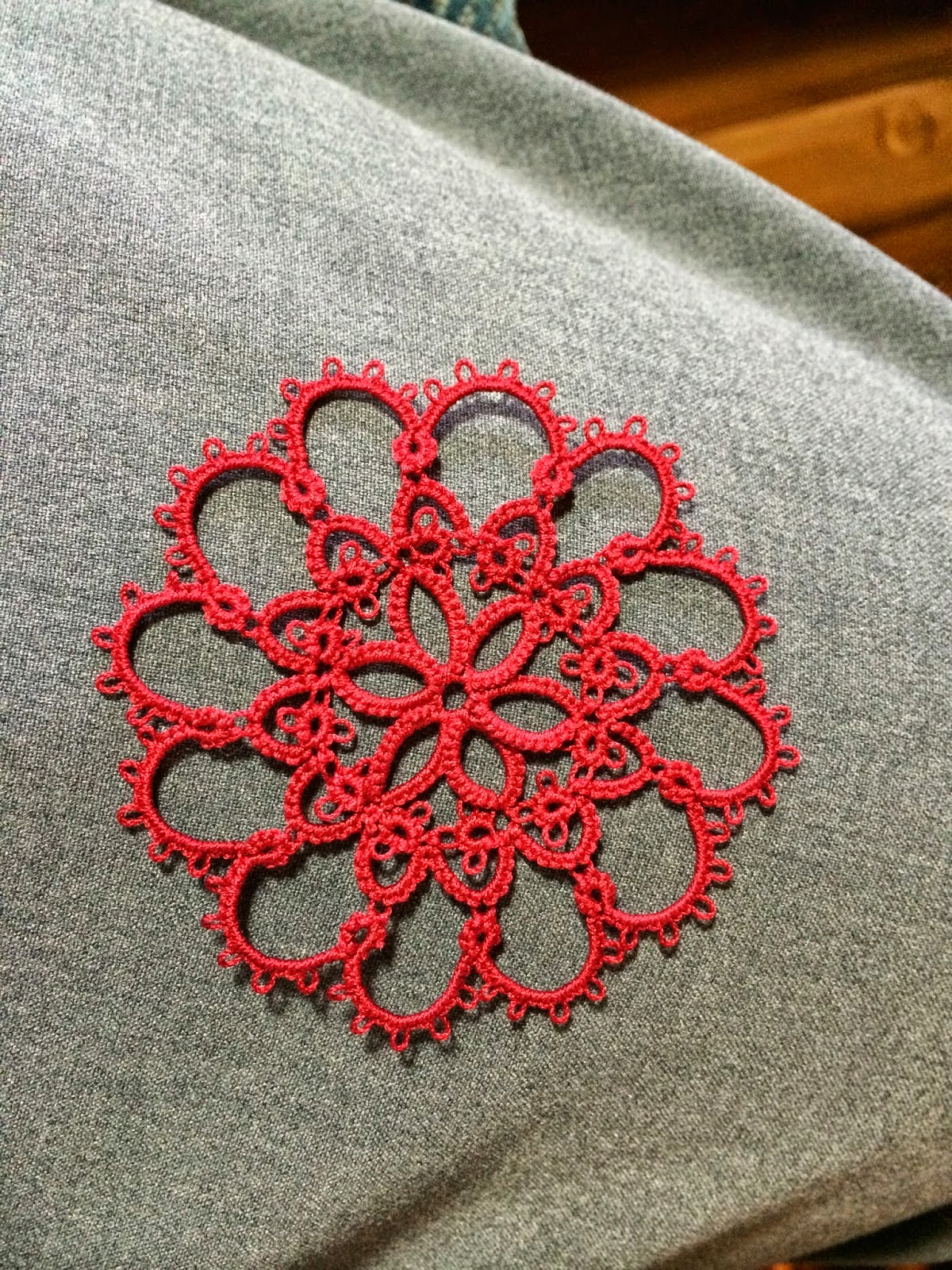 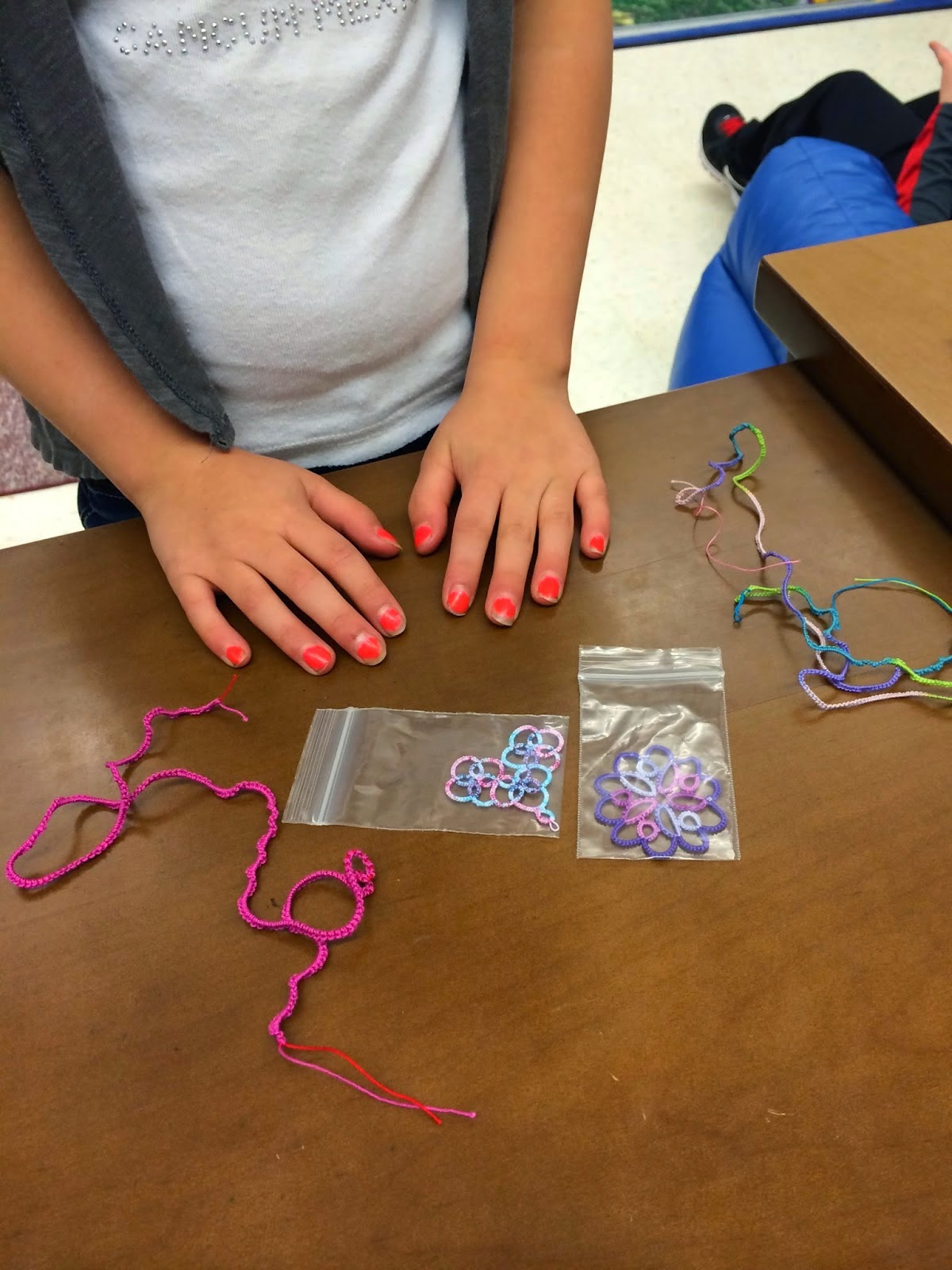 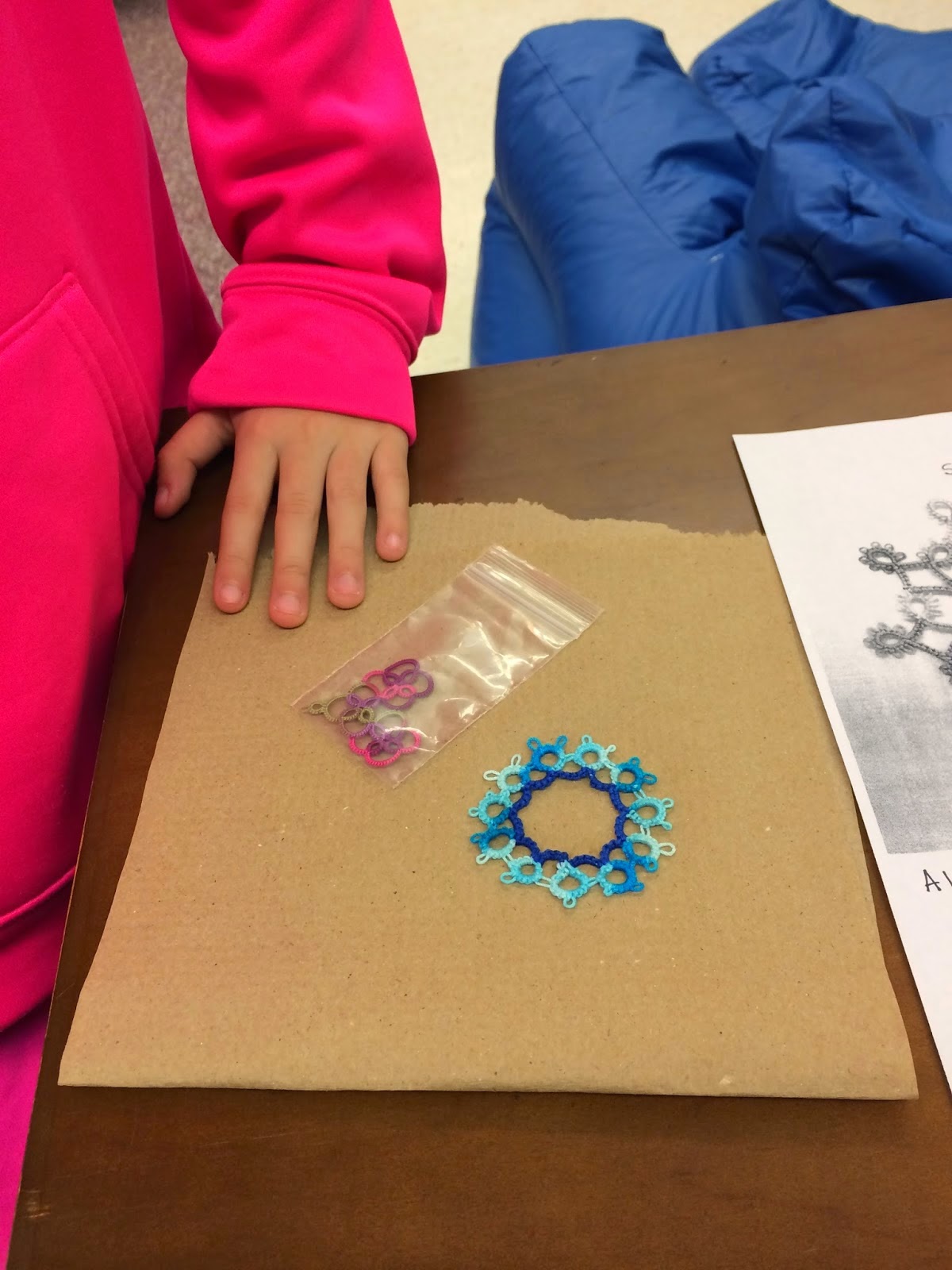 Kristen tatted a ring around a bead, but can't seem to do two in a row without gaps. Emptying some shuttles she tatted, Plain Square Medallion  from Tatting by Adeline Cordet - Book 5. She also did a Bookmark adapted by Kendra Goodnow but since she was emptying the shuttle, she ran out of thread and made an abbreviated version. 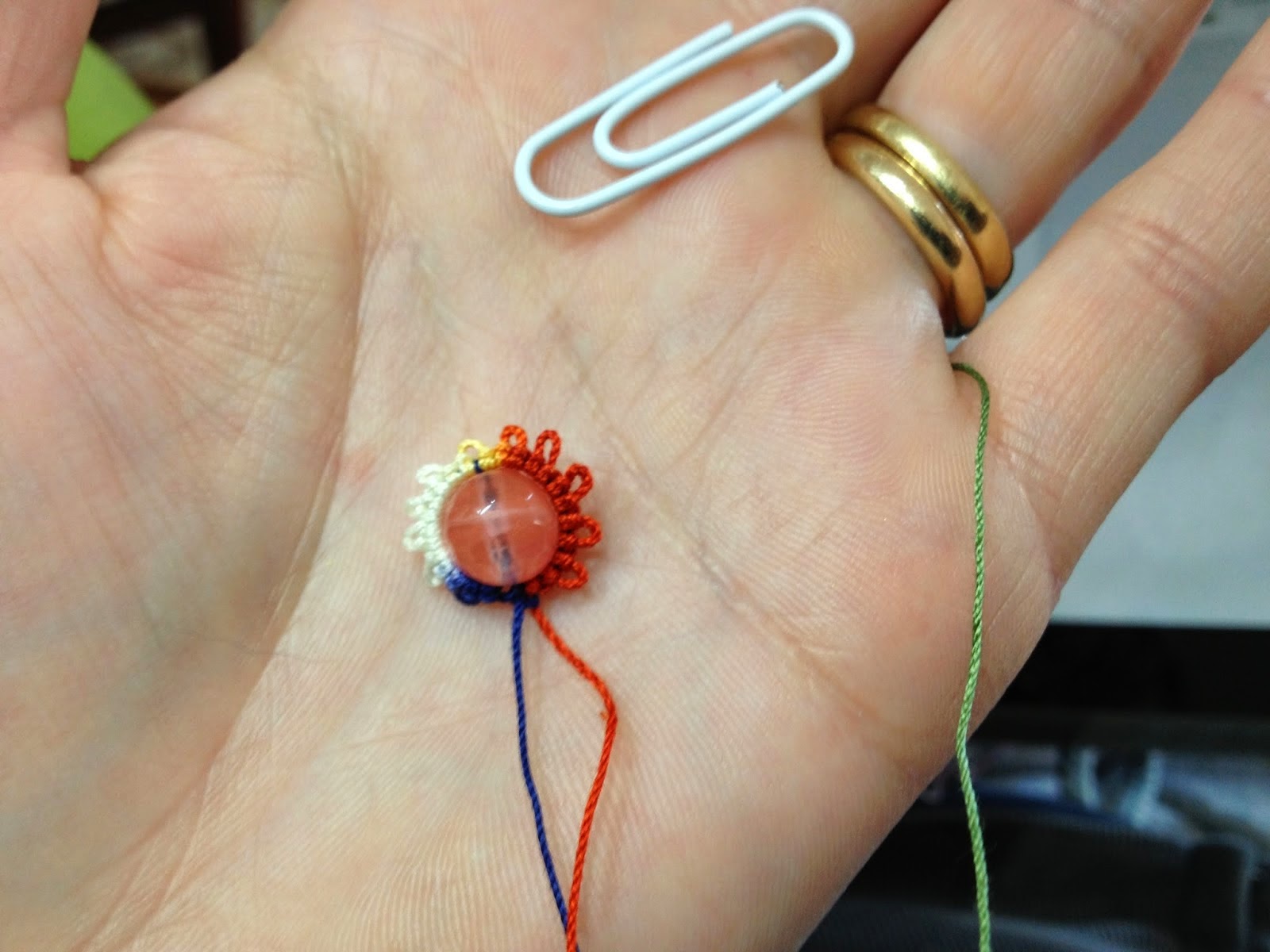 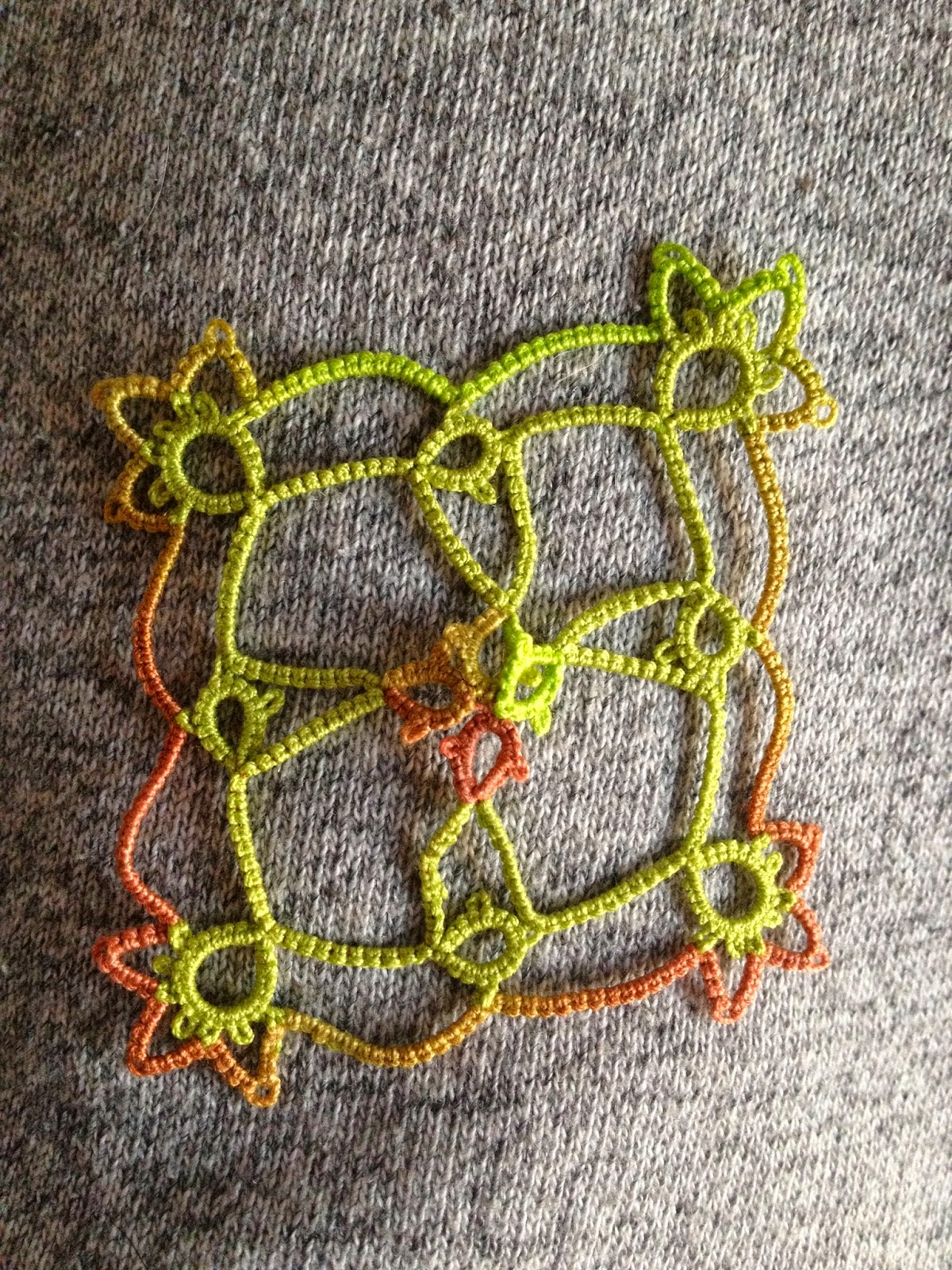 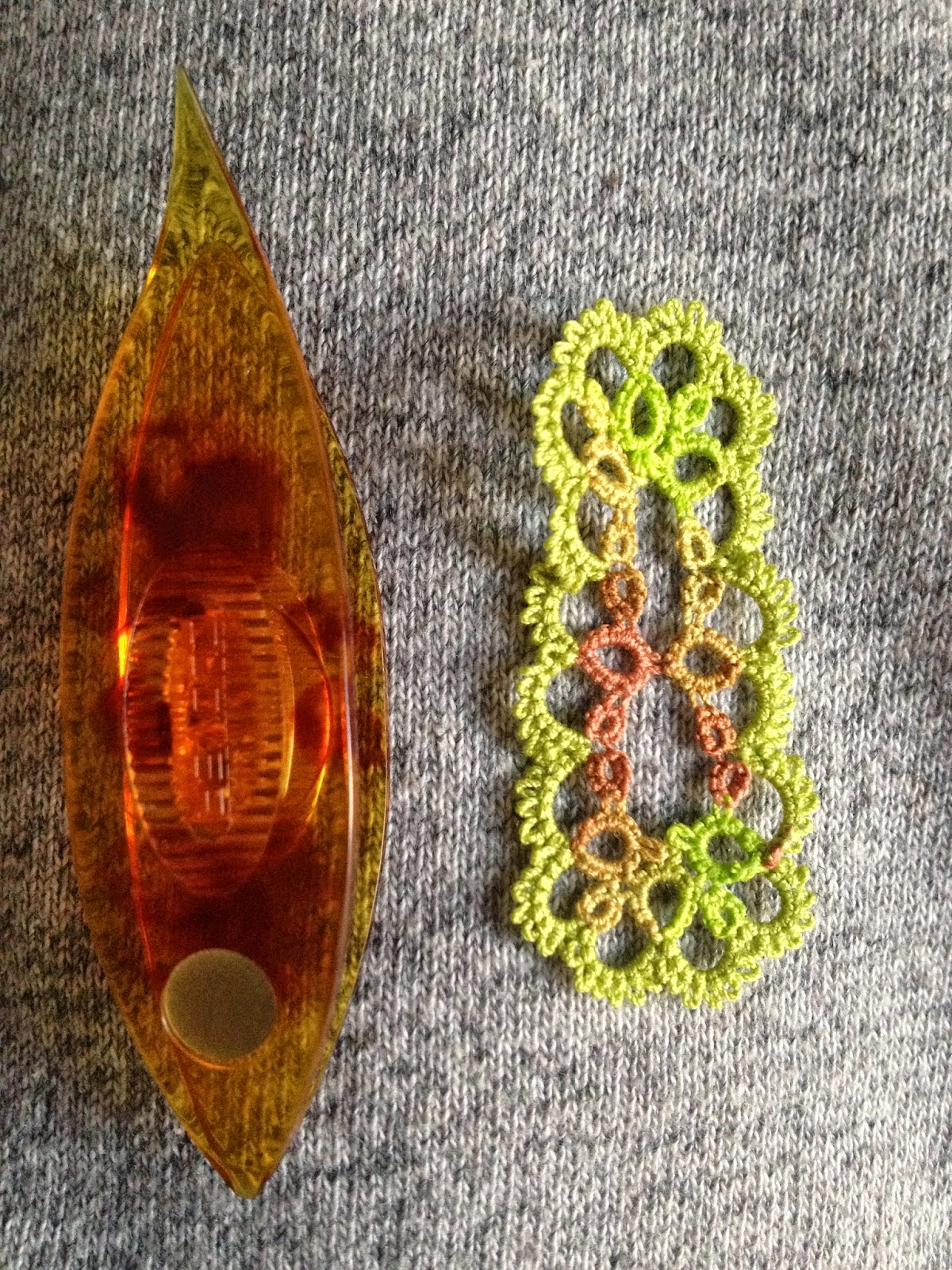 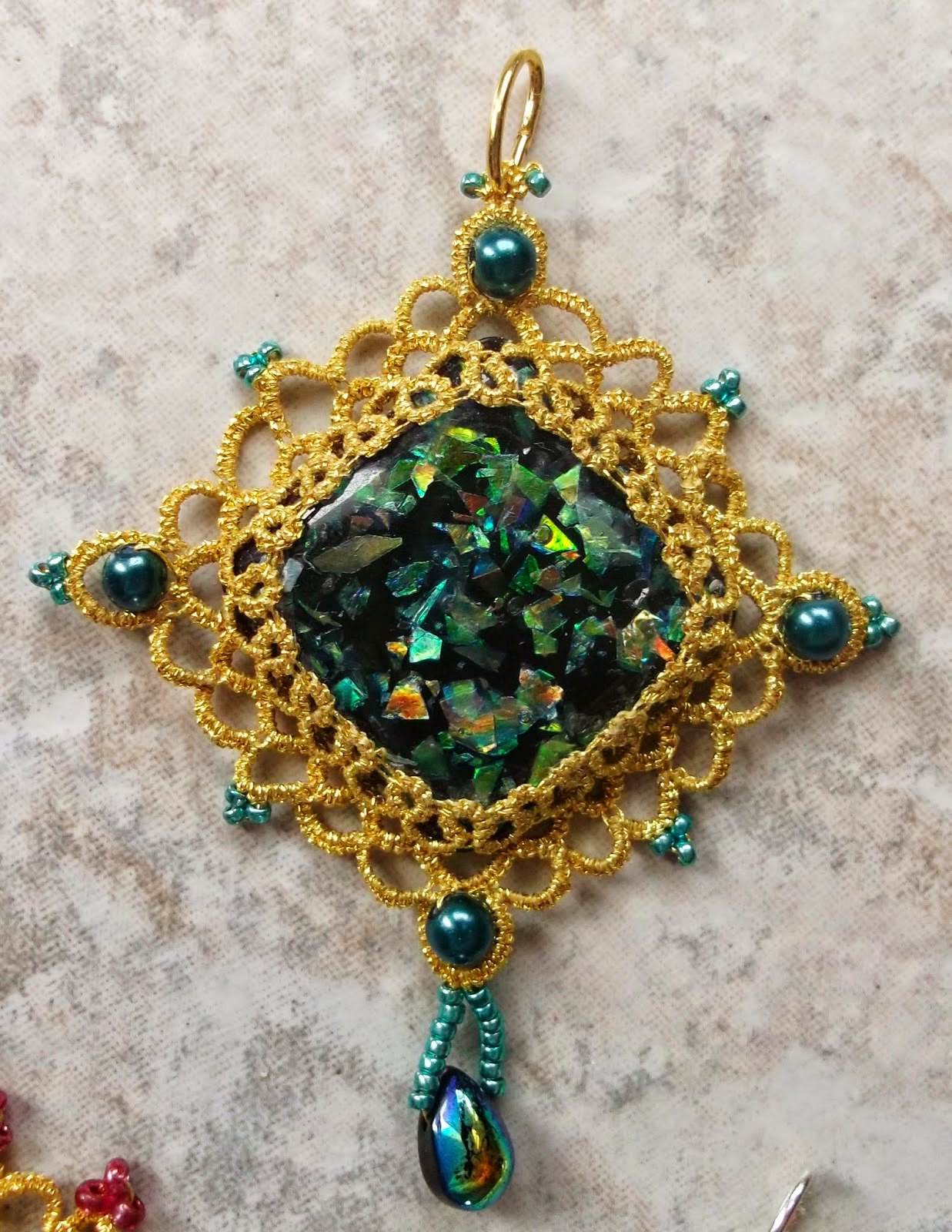 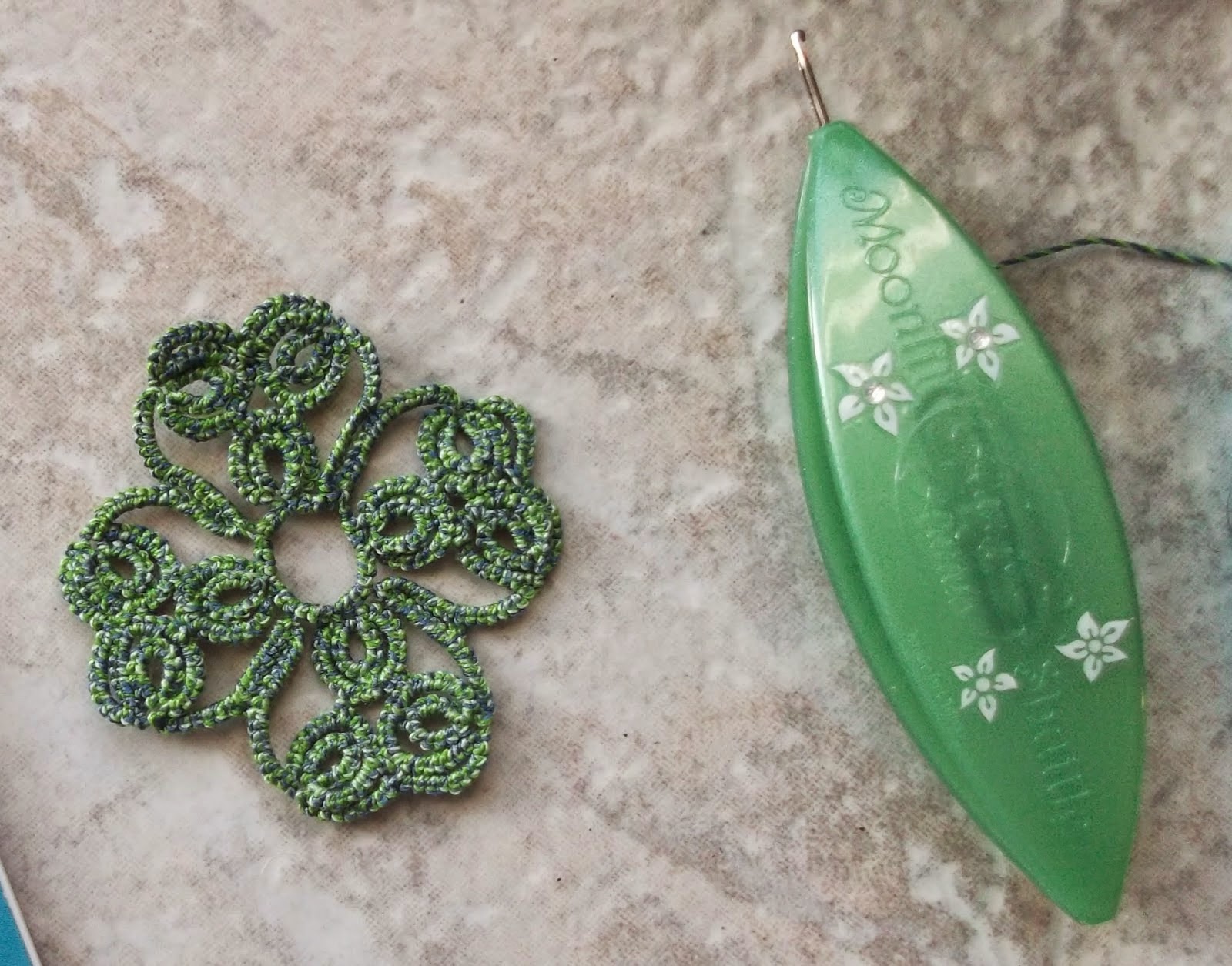 Wanda's grandson wanted a rainbow mouse and selected 184 Lizbeth Rainbow Splash size 20, which grandma cheerfully used to tat her Morgan Mouse pattern. The same thread paired up with colourful buttons made lots of Easter eggs. She added pin backs to some of them to make nice little gifts and has ideas to make flowers. 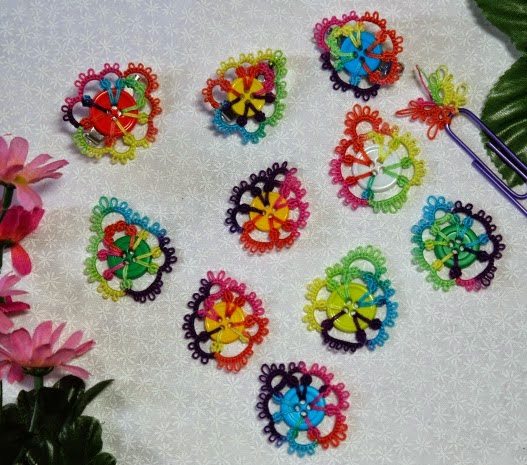