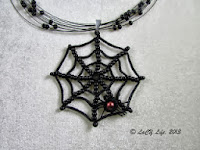 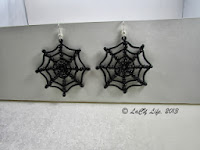 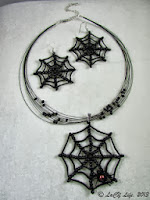 Jessica finished going back and redoing those last three rows on the doily and it's definitely working better, but not 100% the way she wants it. 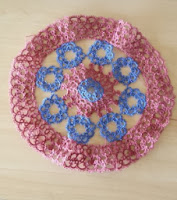 Diane is becoming very frustrated with this doily, called Trefles, from La frivolite fine et precieuse, since she has spent so much time snipping and re-tatting. On round 2 some of the chains were overlapping and on round 3 some of the clovers are lopsided. Sometimes apparent stretching or ruffling on one round is pulled into shape by successive rows, but this one doesn't look like it's going to shape up so she's wondering if anyone else has done this pattern or if they can recommend another pattern for a 14 inch doily. 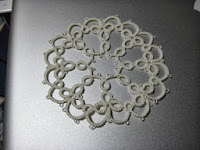 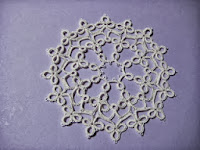 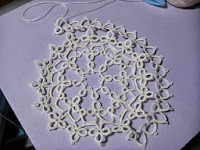 Fox tatted this pattern by Iris Niebach: Milena, from her Tatted Doilies book using a sample of Sulky which is about size 100. Here is her try in Lizbeth size 40 which was just too twisty and wouldn't sit right. Before that she tried it in Perfect Quilter, but the pattern was too confusing in the variegated thread. Here was the earlier attempt, in a DMC #80 thread sent to her by by Ninetta. The Mystery Doily is moving on to row 4. Here is a fun tat from Nancy Tracy. Then there was a dramatic SNIP as she discovered a mistake in round 4 that needed to be removed but accidentally cut into the third row at the same time. The saga of the mystery doily will continue. 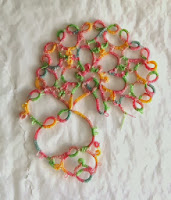 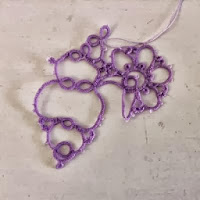 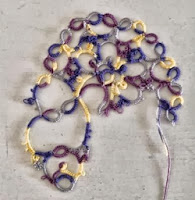 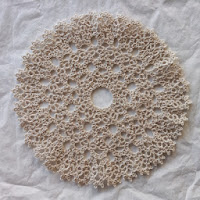 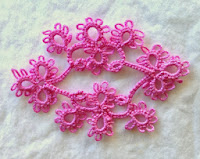 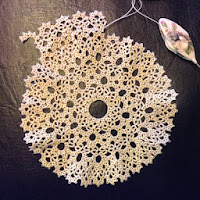 Margaret is using Lizbeth thread no 20 Purple Splendor for her TIAS. Day 8 is completed and she still has no idea what it is. 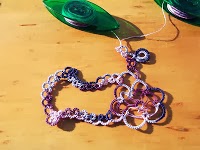 Martha tatted this cross from Fun With Split Ring Tatting by Karen Bovard and added a tail for a bookmark. This continues her personal challenge to tat patterns from books she owns but hasn't worked from yet.