---------------
Laurie's finale for the challenge is the Accidental Heart which was the Week 10 Challenge for the Shuttlebirds Tatting Guild. She's decided to take a break form the challenge while she works on another Clover Doily. 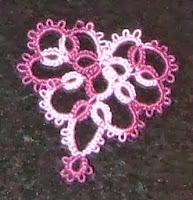 Marta hasn't been doing much tatting except this angel by Sharren Morgan at Palmettos. 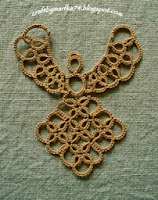 SunshineCraft was asked for a simple tatting project. As we all know tatting is a a skill and an art form, not a quickie craft. However, with a little consideration she came up with this idea for a card with tatted flowers. In addition to being a simple project for beginners, it also uses up thread scraps. These bookmarks are the result of her work in creating a simple design that can be tatted with a paper (cardstock)  shuttle. They were done from top to bottom, with with pearl cotton size 8, Cebelia size 20 and embroidery floss. The mystery doily continues and she actually finished round 2 with the variegated thread. Unfortunately, round 3 didn't work because not all pearl cottons are the same size, so it had to be cut off. 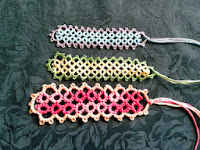 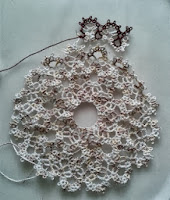 Carrie did Birgit's Small Star in Aunt Lydia's size 10 Victory Red and white although she had to truncate the second one when she ran out of thread. She used the remaining shuttle thread to make a poppy from Tatting collage by Lindsay Rogers and made an extra long stem to use up the thread. It would work well as a bookmark. She's working on the TIAS  and has already learned split rings and lock joins. 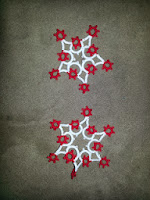 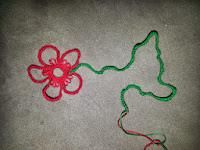 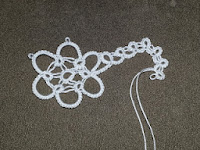 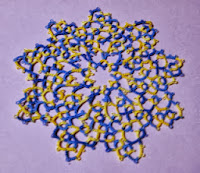 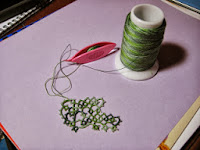 Kristen found the reverse work vs turn work thing was super-confusing, even though Sherry included the tutorial, for the TIAS project. She is working steadily on the Spiderweb Doily and only has a couple more rows to go. She's been thinking of sending this picture of it to CBS Sunday Morning so they can use it as their icon between segments. Wouldn't that get a lot of people talking? 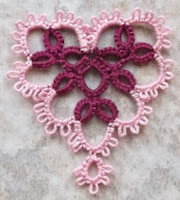 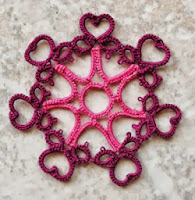 Wanda made the butterfly at the top is in Lizbeth size #20, the yellow on the right in Perfect Quilter, the smallest in King Tut all tatted with the same number of stitches which gives a good comparison of the sizes. The edging is also Perfect Quilter. TIAS, day four doesn't quite look like the pattern so she might have to un-tat a bit and try again. 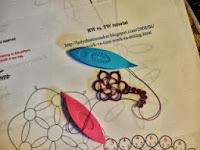 These are nice! I would love to be able to make these, perhaps I`d get it right one day!.