Carrie sat about waiting for the contractor to show up and tatted the first half of Marilee Rockley's Ripple Necklace, in the right size thread this time. Then she used used the rest of the shuttle thread to make a little butterfly and flower. The little hair pin she had for the art fair has become one with the sunhat she bought for her daughter. She continued to work on her Edging. In the evening she tatted the other half of the necklace, in size 10 Black and Mexicana, which just needs her sister's jewelry-crafting skills to finish it. Then she had a chance to start the cross for her pastor in size 10 Victory Red. Her daughter was invited to a friend's birthday party for little girls in dresses and pearls, so an earlier tatted piece was wrapped around a ponytail adorned with pearl drop earrings and topped with a little flower pin to cover up the earring backs. Coupled with a costume pearl necklace, it's instant princess. 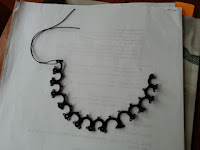 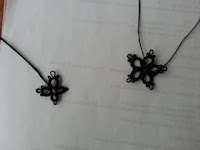 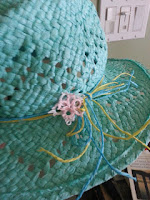 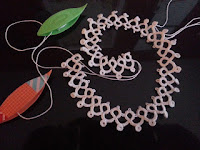 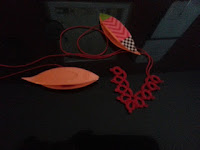 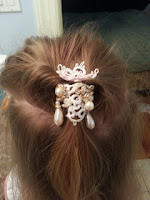 Jane has learned that it helps keep track if you use completely different shuttles for shuttle and ball when doing Martha's heart and to do the hearts separately so that you can cut off the second one and keep the first intact if it all goes haywire on you. The tatting is challenging, but the results are worth it. 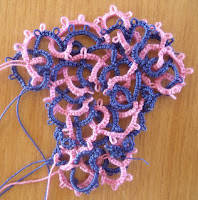 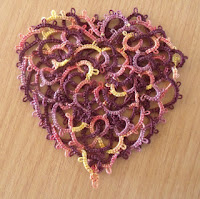 Diane started the Spinning Wheel Glass Mat for Lily in size 20 Lizbeth #122, Caribbean, which is one of Diane's favourite colours. 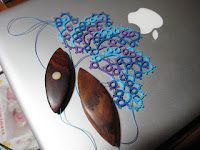 Fox hadn't planned on using this motif, but with the gathers on the shirt, it's the only one that will hang correctly on this shirt for the little lady turning seven. She duplicated the Middia pattern and liked it just as well without the beads. She has been working steadily on the hanky edging and you can see the progress she has made, not only in lace, but also in appreciating the Valdani thread.

Margaret used Lizbeth Tropical Punch size 20 to make the Tatted Seahorse Dragon by Anne Bruvold and Debbie Arnold, which she has plans to tat again. 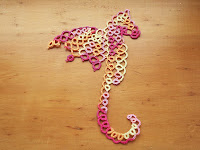 Marie has another bookmark done, that reminds her of a swirly wind current.

Orsi is designing a tatted necklace imagining the result and planning all the structural nature of it. 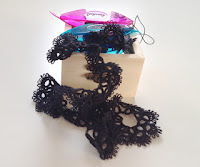 Sue's  friend saw her daughter's rainbow dream catcher earrings and requested a purple pair for herself and 2 smaller pairs for her granddaughters so they could have "look-alikes". This is the larger one, but now she has a problem finding the smaller hoops and is stretchering her imagination to work around the problem. 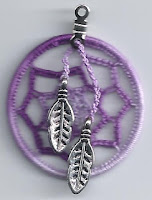 Wanda went on vacation with her daughters and their families and happened to tat some mice, which the kids decided they wanted. She had one blue mouse finished and only Lizbeth #644 Boysenberry Dark and #662 Turquoise Light with her. One grandson wanted a mouse in red, so when she got home she did a red one to send him. The snail is Nancy Tracy's pattern made in Lizbeth #601 snow white in size 20. These tatted motifs are intended to decorate a denim purse. 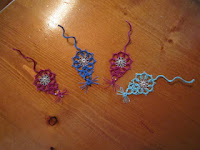 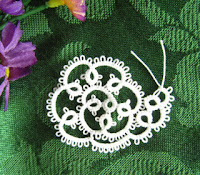