mb duke has her tatted flag done in time for July 4th. 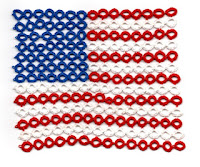 Barbara tatted Ratnawilis from Jon Yusoff's Elegant Tatting Gems in Lizbeth #20, thread #140 called Country Grape Swirl. She has plans to do it again in a solid colour. 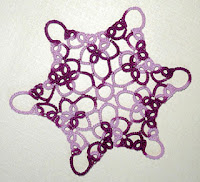 Jane added tatted motifs to facecloths to go with the towels she's been working on. 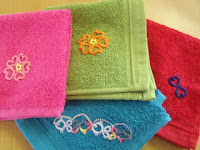 Diane tried filming the finishing steps for the Spinning Wheel Glass Mat by Mary Konior, but she wasn't satisfied with the results and opted for step by step still shots. The finished doily is now ready for Ella and the one for Lily can begin. 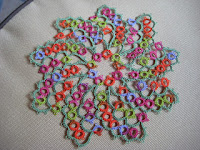 Fox used the Daiso #40, from Wendy to tat this design from Craft of Tatting by Bessie Attenborough, which she might decide to make larger. After much frustration she felt that she just couldn't use the Valdani she ordered. Then some persuasion prompted her to try again with a differen't pattern and Jon’s Row of Crowns from her blog seems like it might work. It's hard not to keep trying when the thread is such a perfect match to the hanky. 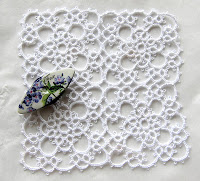 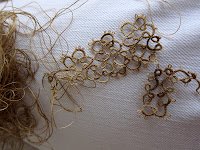 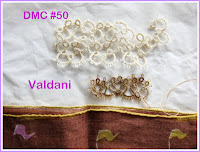 Kathy found a slider with a pair of rings that lets her attach a pendant to it for wearing with a scarf. The slider lets her switch out the pendant to match whichever scarf she wants to wear. 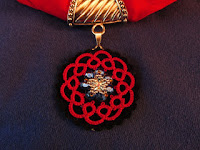 Marie bought some thread that looks like nylon and is about size 10.  Coral Reef Bookmark is the results and one in purples and green. 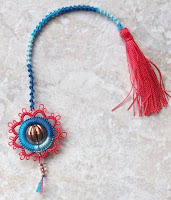 Michelle has loved Frivole's Les P'tits Oiseaux since she made it available and thought it would be perfect to go with a dress that has a plunging neckline. Sadly it didn't work out as planned. Then she tried Frivole's version of Marilee's beautiful necklace, Newcastle which worked out just right. 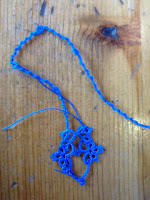 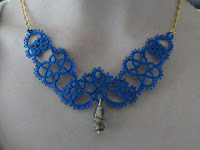 Wanda had several patriotic decorations out. The pin on the hat she made for her dad a couple of years ago and the bookmark was made this year in Lizbeth size 20 in
Red, White and Blue. 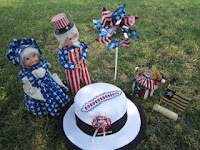 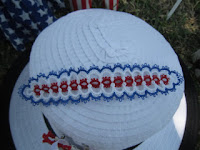