mb duke started Jan Stawasz Doily X, but she's only doing the center motif instead of the entire 15-20 inch doily, in size 20  Garnet and Ecru. 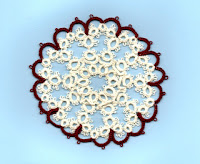 Jane used Birgit Phelps's Li'l Heart pattern to do the bracelet, but adapted it slightly, inspired by Betsy Evans's Rainbow Heart, so that she could join the hearts together. She used  Jess's Tat-ilicious Rainbow thread, size 40 to tat this motif designed by Tina Frauberger and updated by Frances Burgess. 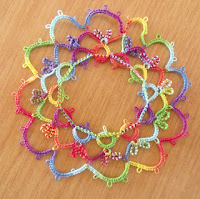 Julie uncovered this bib tatted by her grandmother for Julie's daughter, which she had kept rather than using. She found an antique dresser scarf which has medallions inset into fabric which is an interesting way to use a small motif to make a larger piece. This yellow doily is another of her grandmother's laces which her mother had saved. The six sided snowflakes fit together to create this beautiful piece that her grandmother tatted and it's still white as snow after all these years. 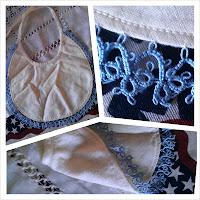 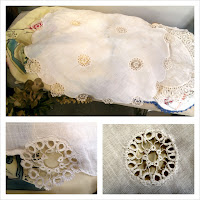 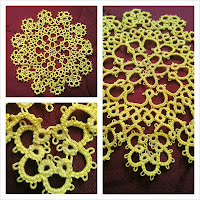 Kristen made some really long false plaits by tatting 8 ds of one color, rw, 8 ds of the other color, then holding both shuttles 1 ds, rw, 1 ds, then repeat. She wove the strands together for a braided effect to make a new lanyard for her ID badge at work. Her brown bracelet was a fair entry in tatted jewelry and won a blue ribbon. The colored bookmark in the corner is hers as well and also won blue. The pillowcase edging which doesn't show very well in the picture, also won blue. The baby bib won another blue ribbon. The Big Doily won yet another blue ribbon. The mobile, which was in an "other than mentioned" needlework category won a red ribbon. 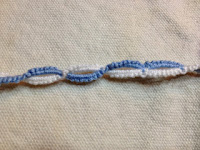 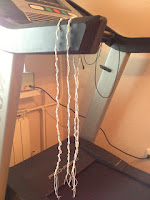 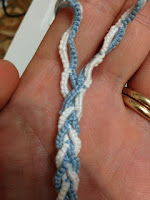 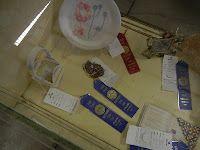 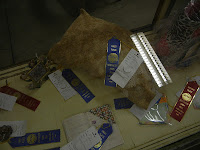 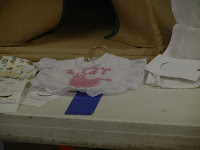 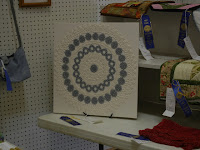 Cindy has the Jan Stawasz Doily XI finally done, just in time to enter it into the county fair. 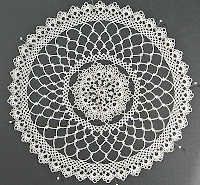 Diane has been busy with the practicing and performance of the play, but now that it's over she had time to pick up her tatting again and fix the Spinning Wheel Glass Mat. 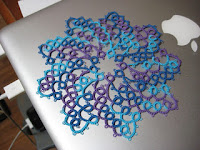 Fox is having fun with this new pattern that Frivole has designed. Here's another of Frivole's Mille-Fleurs, this one shown front and back. This is the start of Viola Posy. The Jan Stawasz motif is done, but Fox thinks it would look better done in one colour. Here is Viola Posy finished. 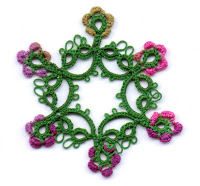 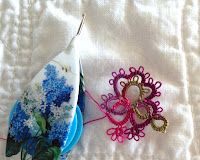 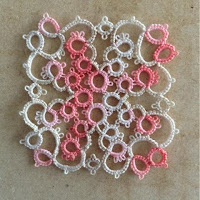 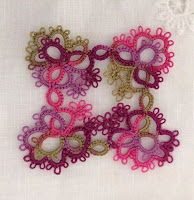 Jess is making progress on Livi's doily, not really paying attention to the pattern, except that Livi wants it larger than the first one she did. That means that she has to keep on tatting and since she wasn't really following the pattern she may have to wing it.

Marie has created a Sunflower bookmark with Josephine knots. 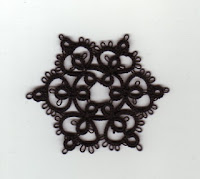 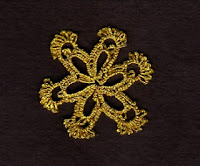 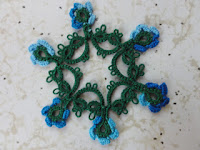 Orsi has finished the basic part of the necklace, but she needs to sew and decorate it. 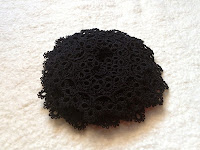 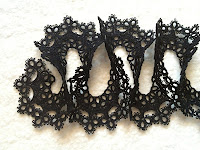 Sue tatted 2 very small Christmas garlands which will decorate artificial wreaths.  The red is size 40 Lizbeth white and the blue is size 20 Lizbeth Blue Ice. The pattern from Tatted Bookmarks edited by Babara Foster, called Flowers was turned into a bracelet. The thread is size 40 Lizbeth Wildflower Garden with flower beads. 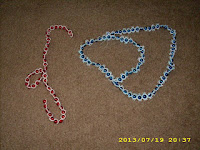 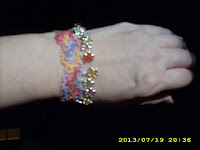