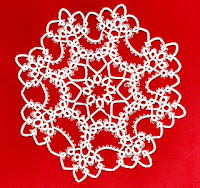 Meryl has the Honey Napkin done up to to round 13 and it's about 44 cm across and almost too big to photograph on her usual desk. Just 5 more rounds to go. These 3 pansies were worked in different methods which caused her varying levels of frustration while working. She started Mary Konior's Spinning Wheel Glass Mat in Anchor multicolour perle 8 colour #1325 but ran out of thread which was going to require cutting the thread to re-load the shuttle, so she put it aside for months, finally undoing it and starting again; pairing the multicolour thread with DMC perle 8 black for the chains for a stained glass effect. 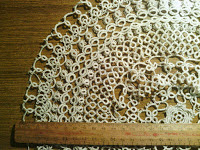 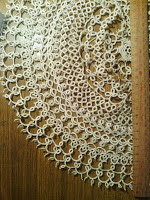 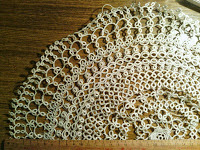 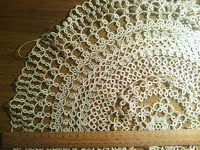 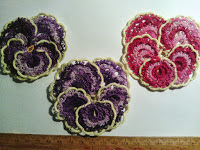 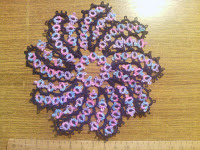 Jane undid and re-tatted the first round of Martha's Two Hearts as One, but it still doesn't seem right and she's determined to just carry on. 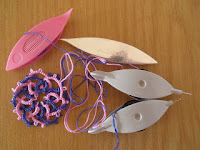 Ginny is working on a doily from Renulek's blog that she thinks is called Snow. 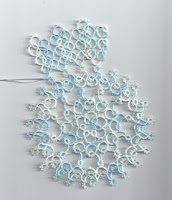 Julie chose her anniversary to share pictures of the tatted crown her grandmother did for her wedding. She also wore her grandmother's cameo on a tatted ribbon. Treasured tatting the survives the test of time. 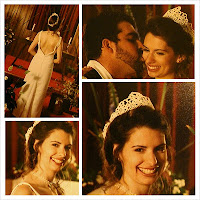 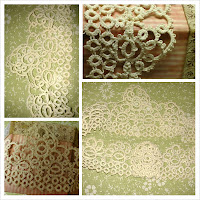 Kristen is working through smaller motifs in a Russian tatting book in preparation for trying the vest on the front cover. It's challenging because the stitch count shown doesn't seem to match the pictures. Using up a thread end resulted in a funny little house and a decent row of split rings. She's also wondering if she should bother to drop the shuttle through the ring or not. 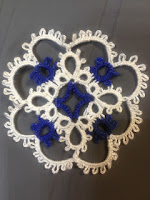 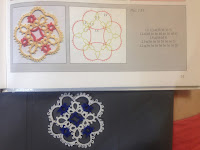 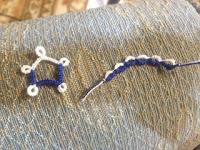 Cindy has round 10 of the Jan Stawasz doily XI she's working on almost finished.

Fox has persevered and is actually enjoying the Valdani thread to tat Jon's pattern. She was first persuaded to ignore the mistakes, then she was persuaded to treat it as a practice piece and start again. She has decided she loves this colour of thread which she initially thought was losing it's sheen, but it seems to be golden and glisten as she tats it. Here's the two samples side by side and she can really see progress in it. She took a break on the edging to try a Middia pattern that Frivole posted about with some beads of course. Then she thought she might try it again with lock join braid for the chains. Here's the Bessie Attenborough design after blocking. 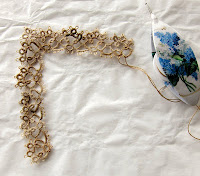 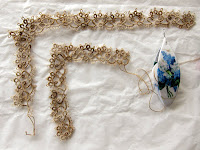 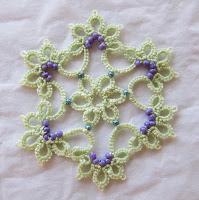 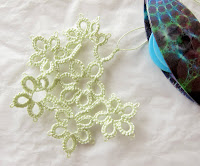 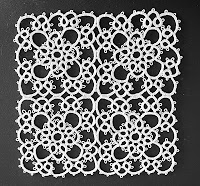 Jess started the center of this doily, just to show off the new Sugar Plum HDT. She has plans to finish it like the one she did last year. 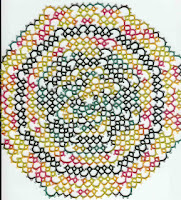 Margaret made the green bracelet is from a pattern in the Book Occhi Schiffchenspitze Frivolite using Lizbeth thread Christmas green mix no 20. Classic Edge Bracelet by Marilee Rockley was made in the same thread. Several pair of crown earrings were made from the pattern from Joelle's blog. The back of the earrings is shown in Rainbow Taffy Lizbeth thread no 20. The cross earrings used Coats pink no 20 which she had on the shuttles. 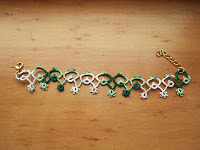 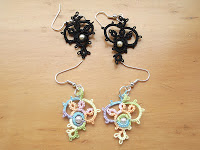 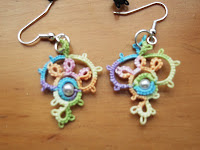 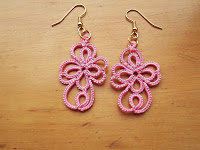 Mica ordered this green thread for another project, but it was perfect for tatting a cicada. 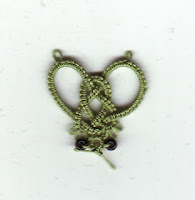 Michelle is still making graduation crosses. This is the Split Ring Cross. 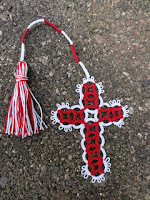 Wow you have done a lot of beautiful work, And to think I just posted one snow flake ornament. Check out my tatting blog is called "Carollyn's tatting blog". love to here from you.