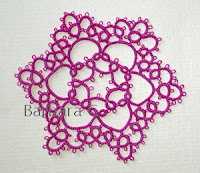 Jane used Jennifer Williams's butterfly pattern for a bracelet order but with some modifications. She originally envisioned the band in the middle of the butterfly, but that didn't work out. She tatted the first heart for Betsy Evans's Rainbow Heart Bookmark and realized that she had made a mistake, so she did it again. Sadly, when she did the next hearts she accidentally joined them to the first heart with the mistake. 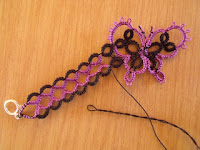 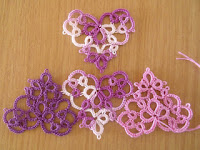 Julie found that she had won the grand champion ribbon for the entire thread division for her tatting. Congratulations! 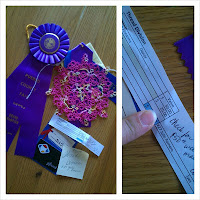 Jessica has finally gotten around to updating and posting the pattern for her mini veil on Craftsy. 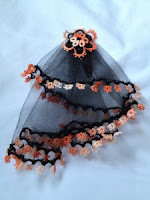 Fox at long last has beaten the Valdani thread into submission and finished the Row of Crowns edging. It does look perfect on the heraldic hanky. 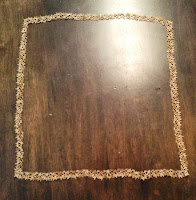 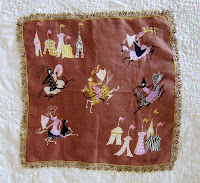 Marie is addicted to tatting this nylon thread around rings, like in this Carnation bookmark. She's tired of making bookmarks though, so these are earrings. Followed by a Coral Reef Necklace to match.

Orsi is still working on her necklace which is more of the same, which might be thought of as boring, but it is lovely lace.

Wanda thought Norman, the rooster from Jane's 2010 TIAS would make a good subject for the album cover of her Independence Day vacation, since the cabin they stayed in was called Rooster. While she was at it she went ahead and did one with a pink Morgan Mouse. All threads used are Lizbeth size 20 in various colours. 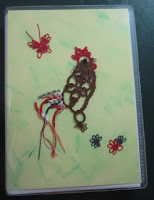