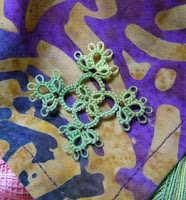 Prabhjyotsaini loves this thread that she has chosen for TIAS and she's thinking of going back and doing last year's TIAS goat as well. 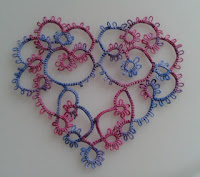 Linda is using size 20, variegated purples # 165 for her TIAS. Here is her Tea Cosy RR block with it's tatted embellishment. The Lace Mat, tatted with Lizbeth 152, Christmas Green Mix in size 20, is finished and she decided not to add the clovers to the top two small rings. 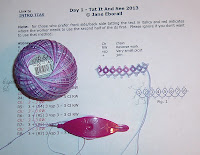 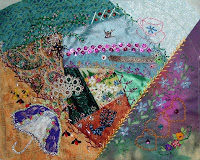 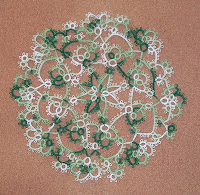 Cindy tatted Motif #1 from the book Tatted Treasures done in brown thread with multicolored brown and blue beads. The beautiful heart in the new Jan Stawasz book, is based on the familiar Mary Konior's Queen of Hearts done in Yarnplayer's Rhubarb Pie, Size 20 thread. Cindy shows us both Mary's original heart, and Jan's variation with the cloverleaf at the bottom.

Diane tatted a Seahorse Dragon for her grandson in size 20 Spring Grass HDT from Marilee Rockley. She's using size 20 Lizbeth #165, Grape Splash for TIAS. She fell in love with this cross from Jan Stawasz's new book, Tatted Treasures which she tatted in size 20 HDT, Spring Grass. 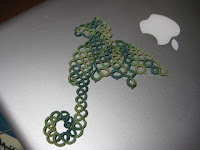 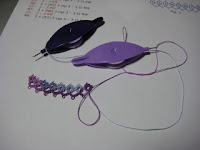 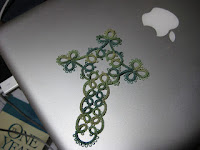 Fox has tatted the same Jan Stawasz motif in variegated pink #40 Milford from Val. Of course she had to join this year's TIAS as well and the Honey Doily is back from it's time out. She's planning a move and found enough treasures to host a giveaway with goodies like those shown here. She was on a roll until she made the sam mistake again on this round of the Honey Doily. She started this edging several weeks ago using #40 Olympus and the thread and beads match up perfectly with the hanky. 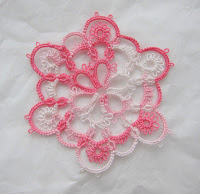 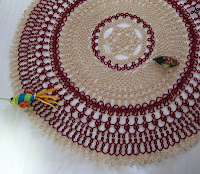 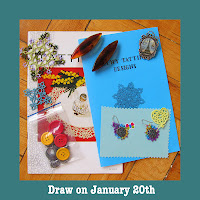 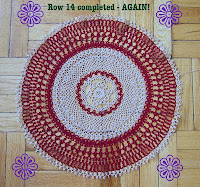 Jess has some Starflowers tatted and this one used size 40 Watercolor Sweetheart Messy Jess!-y, with added size 20 sea-green light on the chain. The next one was done in a special colourway she did for herself. The one in Karey Solomon's HDT with 15/0 green beads around the outside.

Marie tatted a set of 15 Christmas balls in crochet thread number 20 and lots of beads before Christmas. What a simple yet elegant pattern.

Sherry found some scrapbooking paper with a tatted design on it! she shows us some of her hook pens along with a sweet tatted flower motif.

Sue is working on a doily which has inspired her, but you'll have to check back to see what the results are. She has also experimented with creating her own "confetti" thread by placing dots of colour on white thread with a marker. This starting bit is a ample of what it looks like tatted up. 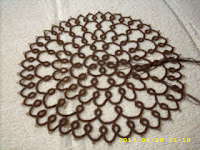 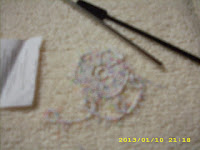 Tattabugg fell on the ice and hurt her wrist, but she's still trying out Jane's TIAS. 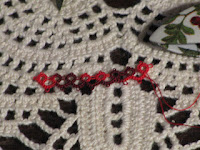