Sharon has decided to pick up her tatting again and has joined the challenge. First off is her TIAS which helped her learn how to do a Larks Head Picot Join. She couldn't resist Jane Eborall's Fandango Snowflake and did it in all kinds of colours. These were rapidly followed by Jennifer Williams' Snowflake using two shuttles done in Lizbeth Blue Ice. 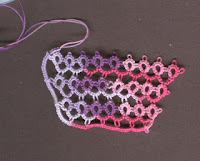 Laurie tatted Medallion No. 128 from Corticelli's Lessons in Tatting, using Lizbeth #130 Island Breeze in size 20. The rings were supposed to be solid and the chains variegated, but somehow the shuttles got switched. 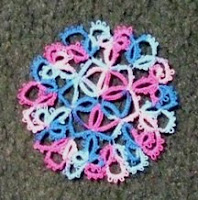 Jane has tatted Day 5 of TIAS and she's wondering where we go from here. She has completed five of Renulek's motif, and sh e thinks the onion rings have a right side and a wrong side. 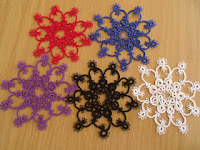 Lelia received a lovely package in the mail from fellow Tollway Tatter, Denise which included a lovely Enchanter heart motif from one of Jon Yusoff's patterns and a GR8 butterfly. Cindy tatted Day 5 of TIAS including the technique for lock chains and includes an up close shot of what they look like. Day 6 TIAS is looking stranger and stranger.

Diane was fighting off a cold and didn't get much tatting done, just these motifs with findings done in size 20 Lizbeth #107 Tropical Fruit,  #601 Snow White and the one on the right is size 20 HDT from Yarnplayer, Hydrangea Dark. Then she caught up on Day 5 and 6 of TIAS. The she decided to tackle the camelia from Lyn Morton's 5th Book of Tatting Patterns, using Hydrangea Dark HDT from Yarnplayer, which she knows isn't the right colour, but she was trying to get the technique right. 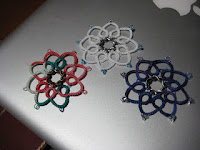 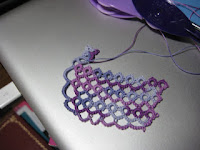 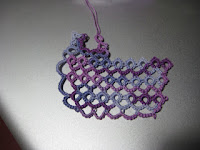 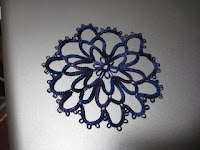 Fox has Day 5 of TIAS done. She couldn't bear continuing the Honey Napkin in red so she has switched out the red for cornflower blue. The cap from the Jan Stawasz book is not shaping up, it's staying flat. That happens to work out well because the little one has decided she'd rather have a large mat for her bedside table in pink and purple. 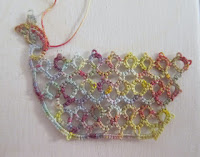 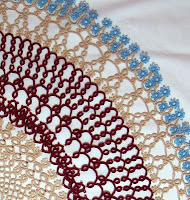 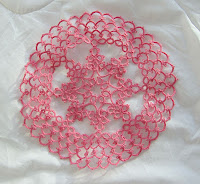 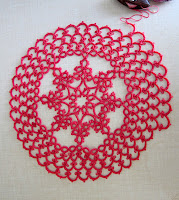 Frances is back from her blogging break with news that she has begun teaching a group of folks how to tat and she shows us some of the lovely tatted ornaments she did for her husband's family for Christmas. She also tatted a lovely beaded Minor Flying Norwegian Dragon as a present for a girl's 21st. 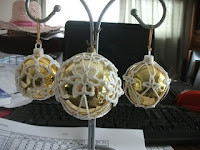 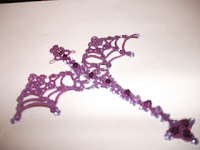 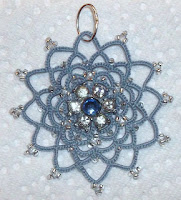