Jane was inspired by Frivole and Fox to tat this motif by Renulek. Day 4 of TIAS is taking on shape and giving her practice on Catherine wheel joins. The motif by Renulek was so much fun she had to do it again. 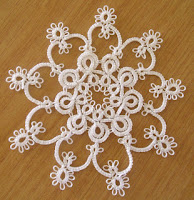 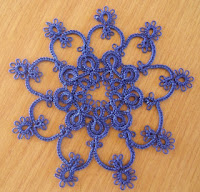 Lelia used Lizbeth size 20 Sea Island Citrus-161 for this motif and she thinks it's an awesome colourway. She used Lizbeth color 131 for the next motif and both patterns come from Patti Duff's Mini Tats. 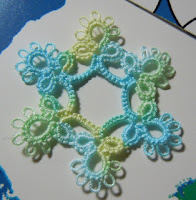 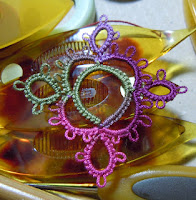 Linda learned another new technique, namely the Catherine Wheel Join that Jane says makes a neater finish than using a lock join for the TIAS Day 4. 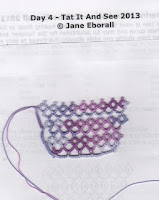 Cindy was DARED to try Jane's TIAS, so she HAD to do it. Day 1 was fine, but not reading the directions meant she had to fix a little glitch on day 2. Day 2 was sorted out and Day 3 completed. Here is Day 4 and a lot of people are asking "what it it?"

Diane has been doodling in size 20 thread. Mary Konior's Leaf Braid from Tatting with Visual Patterns in Lizbeth green #167, Jungle Greens. The pink motif on the left is #621, Dusty Rose Lt, the pink on the right is #628, Salmon Med. Lots of shuttle emptying happened along with her first attempt at creating a layered flower which turned out beautiful! TIAS Day 4 resulted in Diane learning how to do and undo a Catherine Wheel join. More work on layered flowers, another braided doodad on the left in Lizbeth 166 Pink Cocoa, size 20 Coats Raspberry Sorbet HDT from Tatskool is being used for yet another Spinning Wheel. 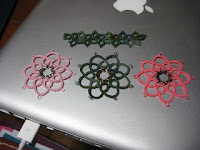 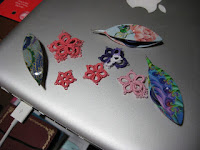 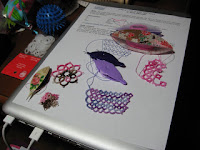 Fox has taken the scissors to the Honey Napkin again. Let's not talk about it. Here's the new project for the little one, a cap from the new Jan Stawasz book which she is doing in size 10 Cebelia. 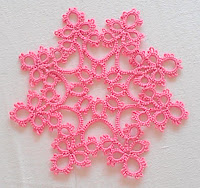 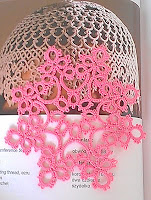 IsDihara and needle tatter Sw4nkyL4c3r hosted a monthly Tat-Along at their LYS and had permission to use Vicki Clarke's Ruffled Heart. Some tatters finished their heart and a second shamrock pattern which was wonderful for a 2 hour session. 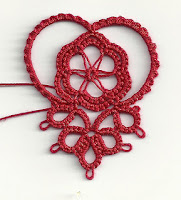 Jess tatted this little flower based on the flowers from Mary Maynard's Ring of Flowers in size 100 Rainbowlicious. She's working through Jane's TIAS and so far, her method of adding new thread each day has worked out well. This is size 80 white. She's working on some tatted flowers for a friend's baby's feet. She was so inspired by Marilee Rockley's Jubiloso doily that she's attempting to do a woven/ celtic add on to her starflower design. Here's a prototype of what the tatting on a baby foot looks like. This flower is in Lizbeth size 40 Dusty Rose Lt, and the pattern was modified from one of Dangela's in her book Occhi-Patchwork. The leaf is Frivole's leaf pattern, but  modified as well to make it a little bit longer.  The thread on that one is size 40, she dyed herself to a seafoam color.

Marie shows the steps she uses to re-purpose findings and add tatting. For this one she's using Lizbeth, size 40, Ocean Teal Dk; silver, glass seed beads, and part of the scroll design. 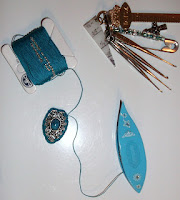 Orsi has a new earring design done and a sweet, one shuttle, heart design finished for the challenge. 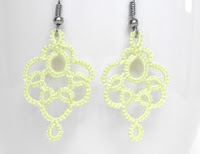 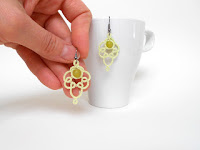 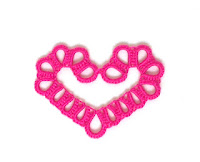 Sue is glad for snow because it gives her more tatting time to work on the doily project she has going. 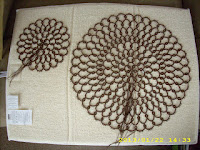 Wanda did her version of Flower Heart from Kelly at Tatfully Yours to makes these earrings in size 20 Christmas Red #671 with silver beads for her and her daughters. TIAS 2013 in Lizbeth #131 Vineyard Harvest size 20 is keeping her guessing. 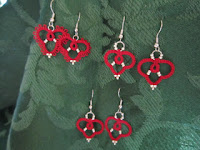