Jane's next challenge was to learn the Lark's head picot join which is helpful for eliminating the colour blip when using two colours. Marie Smith's beaded shuttle bag and she thinks the effect looks like scales. Then she tried working the design as a piece of flat fabric, which had it's own challenges. 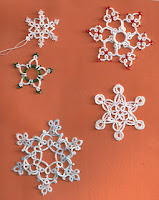 Nancy joined others in tatting the Norma Benporath Lace Mat pattern which Jon Yusoff kindly brought up to date and now Jon is hosting a poll to select the 5 most popular. One design done do many different ways and all of them lovely. 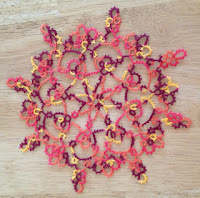 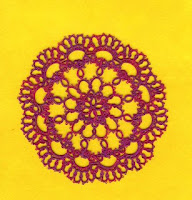 Cindy has refinished a dresser and used it's glass top to display some tatting. Diane has her fixated on beads and a gift of beads and matching thread had her trying out Frivole's December Snowflake pattern. 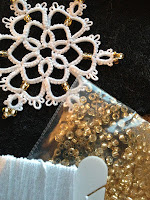 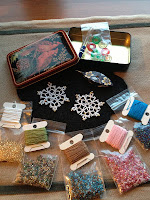 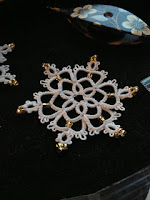 Diane and the Tollway Tatters gathered for another meeting where her grand daughter enlisted the help of her mom to load her shuttle. Denise worked on a baby bonnet from a Workbasket pattern, Sue Anna worked on Marilee's  Marian snowflake pattern and Marilee worked on clunys separated by Double Core Single Shuttle Split Rings so that she can tat two split rings in a row in two different colors. Diane finished this "Christmas Decoration" from Tatting theory and patterns by Jan Stawasz in size 20 Lizbeth, Snow White. Motif #2 from Minitats: 69 Petite Motifs by Patti Duff was done in the same thread. Then she did Motif #6 in Minitats, because she wanted to use up the size 20 Lizbeth, Wedgewood Dk thread on a shuttle. Doodad Snowflake #2 was tatted in size 20 Lizbeth, Snow White #601 using glass seed beads, but the weight of all those beads made the arms a little heavy so she thinks it will work better mounted in a bangle. Triangular Doodad Snow Crystal done in size 20 Lizbeth, Snow White with more beads. Doodad Snowflake #3 in Snow White should finish off the Christmas vacation. L is for Lily, who loves the color purple and this one is tatted in size 20 Flora, #64. 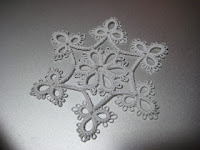 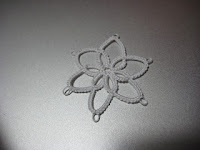 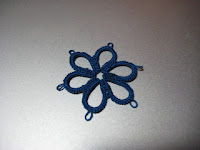 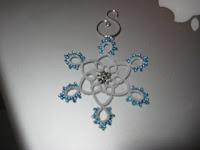 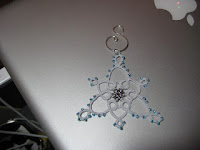 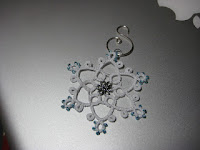 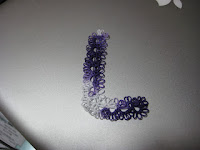 Fox has decided that since she doesn't like pinning out picots, perhaps prevailing petite picots will help so she has decided to pay closer attention to picots and shrink them to half of their size like in this motif. Snowy sent her a marvellous book, La frivolite aux navettes by Edwige Renaudin and included with it these 3 exquisite motifs. The Honey Napkin progresses and is exempt from her resolution regarding picots. A new ball of Finca perle 8 was put to use tatting a motif from her new book, followed by another, because one is not enough. 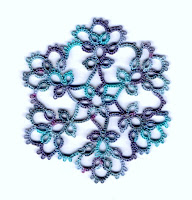 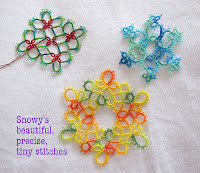 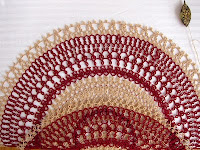 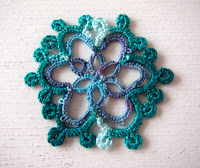 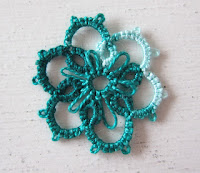 Jess tatted the first three rounds of Marilee Rockley's Jubiloso doily which she had planned to finish, but it looks so good as a Motif on a Button, that she decided to stop. She also tatted Jon's Sweetheart medallion and altered the center for this purpose.

Margaret didn't like how her Tat-Along mat was going so she snipped it. Here it is tatted back up with round 3 added. Here's the snowflake she sent to the Snowflake appeal for the Sandy Hook Elementary School. 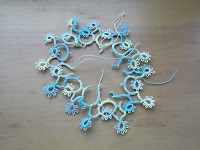 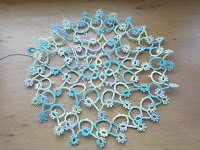 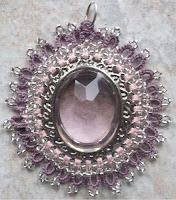 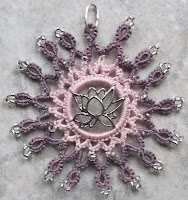 Wanda created this pin for her MIL tatting a little heart in Lizbeth Christmas Red #671 size 20 with a cloverleaf base surrounded by chains, mounted it on a wooden heart and added a tiny angel charm. Lizbeth Seagreen Dark #688 size 20 and pink seed beads were used on these earrings created for her daughter. The other daughter got the same thing in The other set is in pink thread with black beads. Lizbeth Western Sunset #102 size 20 and silver seed beads were used on this pendant and earring set she created for the new year. 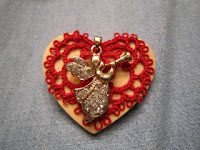 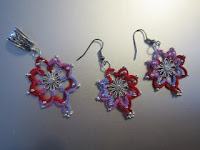 Hi, Sharon,
Can you believe it? TWO rows! DO you know how many yards that is??? I am beyond frustrated! Lucky it is just tatting and I am not tatting peace treaties or something really important! Tee hee!
Fox : ))

are people still playing in 2014? my shuttles have been sorely neglected for some years, but it would be lovely to get back to it!