Batty Tatter has made spring and summer trees, so now it's time for fall, for which she has plans to create water colour backgrounds. Then she did another of Jane's TIAS sailing ships. 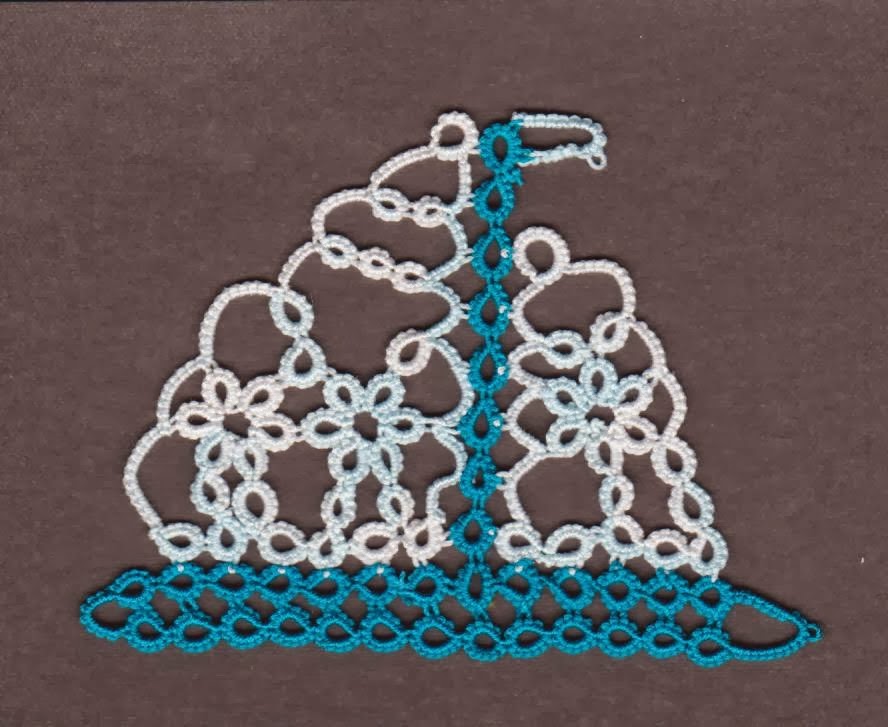 Lilas tatted this double layer rosette flower and then provided a tutorial so others can make it. Her finished flowers done in used Cébélia size 30, with little beads and amethyst pearls make lovely little floral earrings for spring. 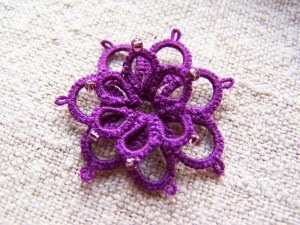 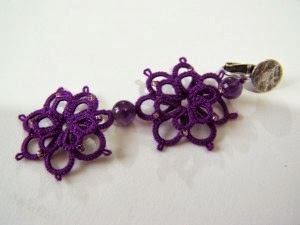 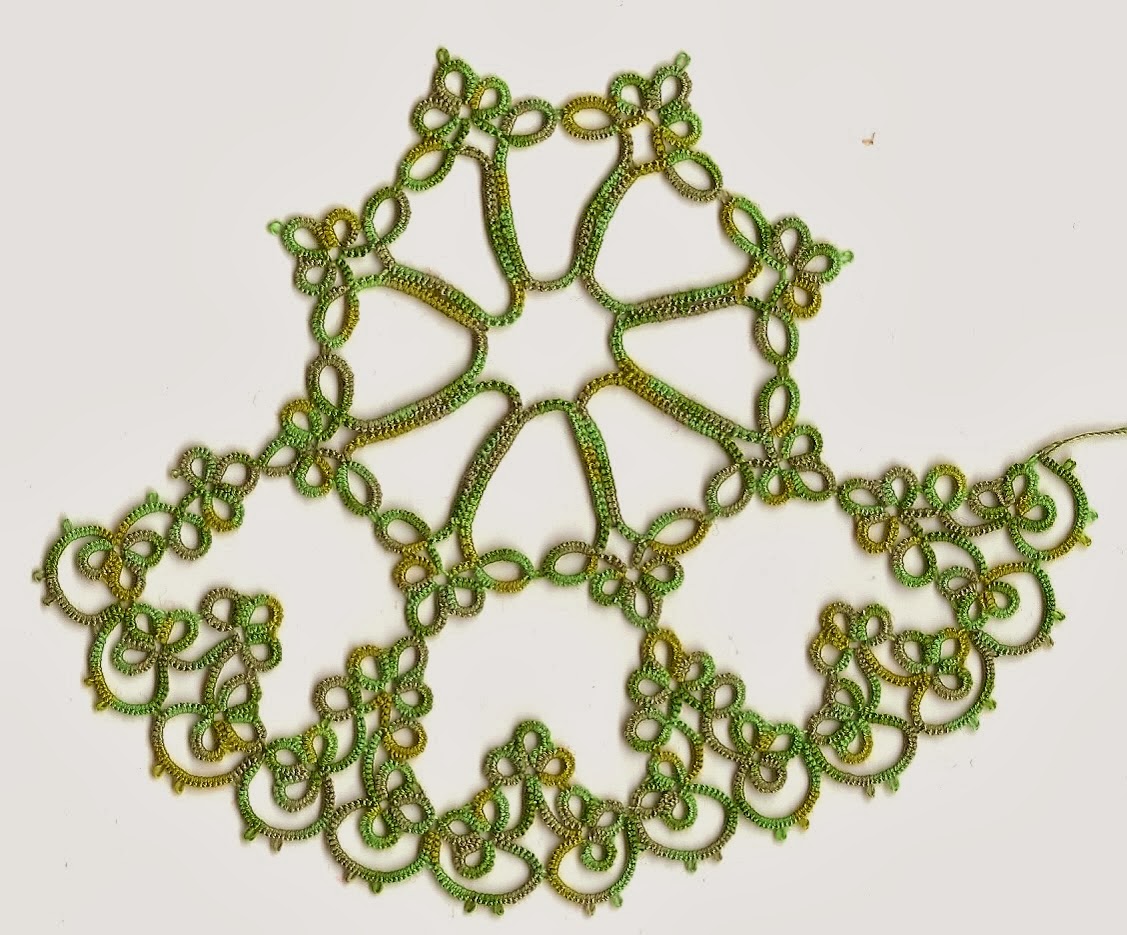 Claire made the famous giraffe by Jane Eborall as a Christmas gift for a friend and found that this pattern which she did in Lizbeth Falling leaves size 20 took a lot of concentration. 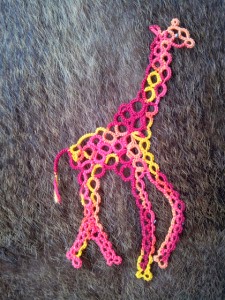 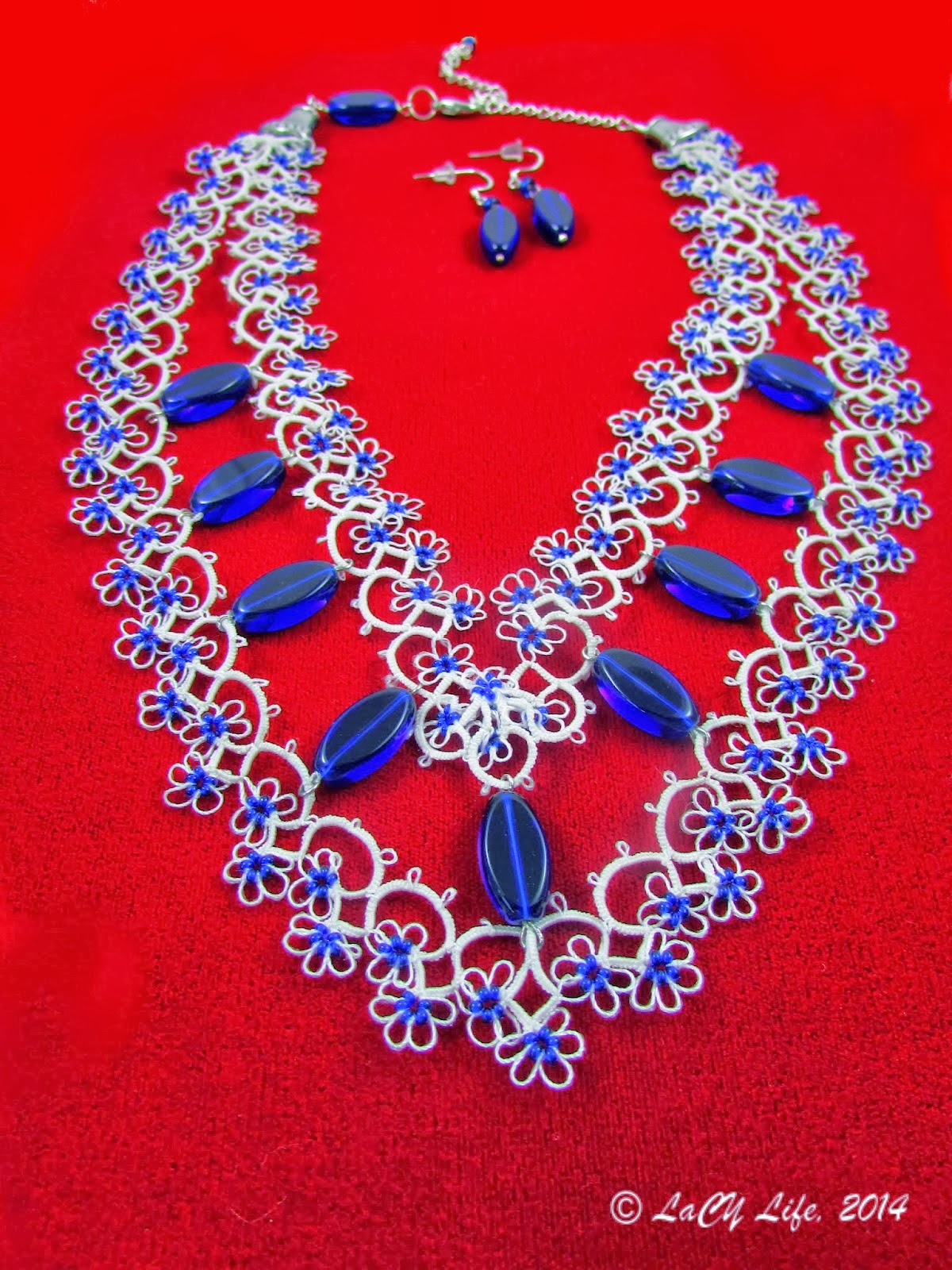 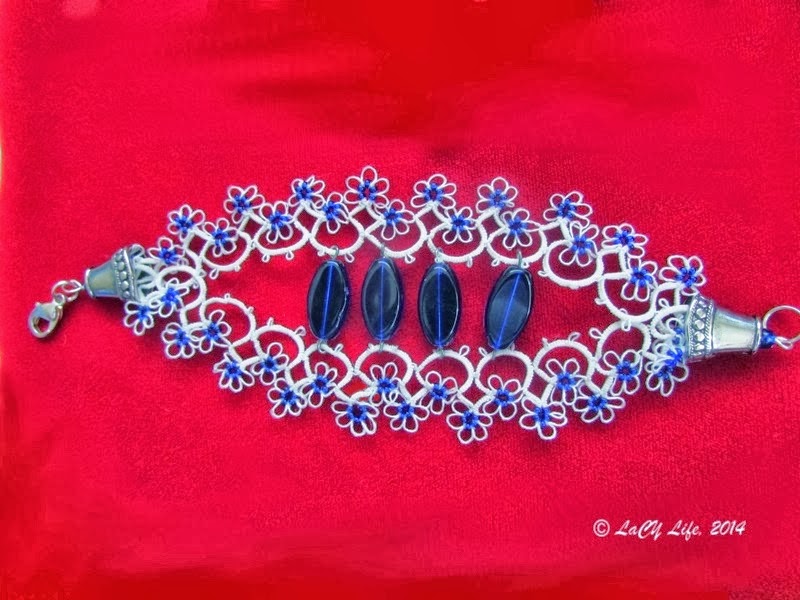 mb duke is using Lizbeth size 40 in 675 Fern Green Medium, 136 Autumn Spice, and 673 Terra Cotta to make Renulek's Spring Napkin, to match the curtains in her living room. Even before it's finished, this doily has a home. 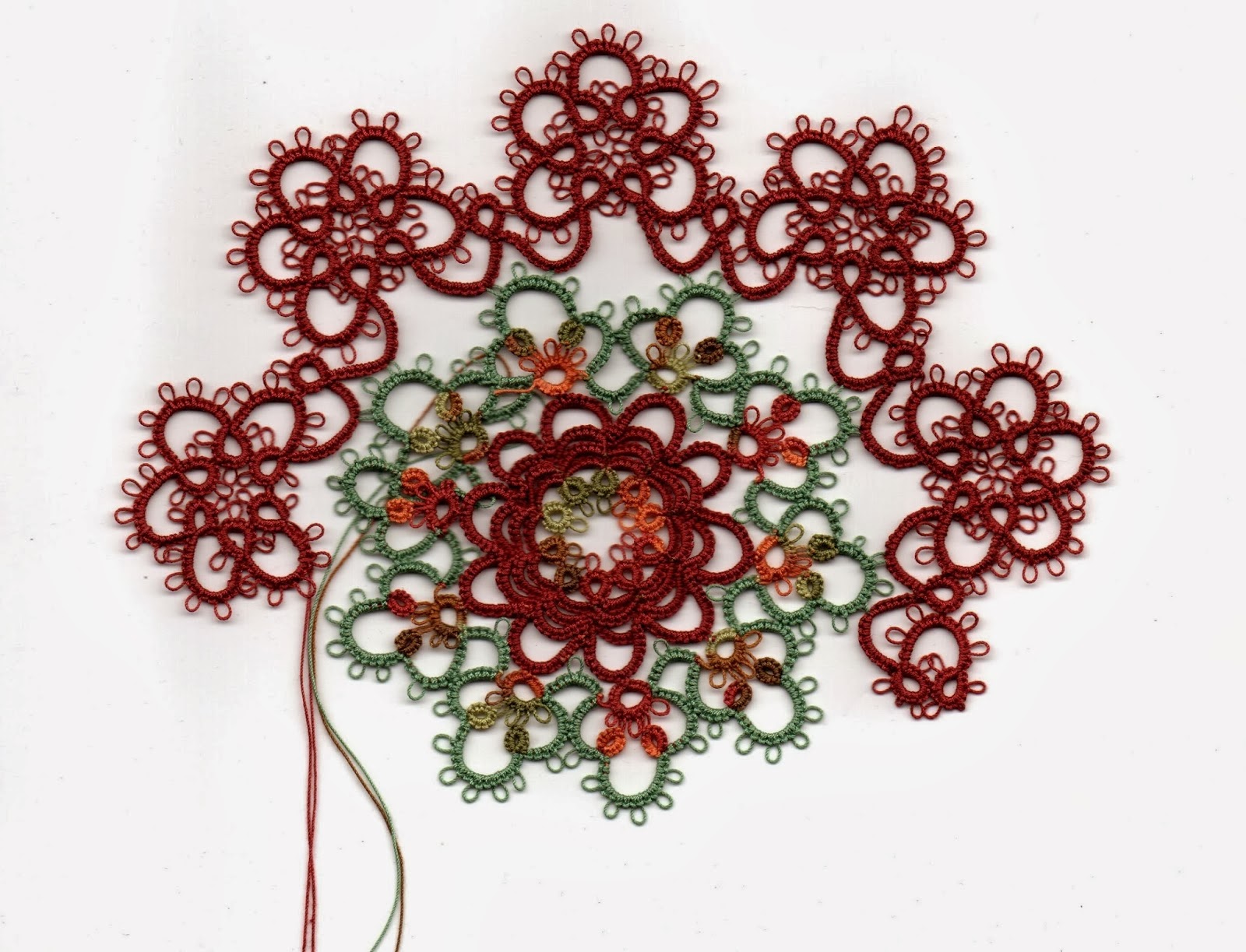 Grace initially tatted this design without beads, but she found that the beads gave it a bit of an outline to draw the eye. She added jump rings a neck cord and a crystal attached for weight at the bottom to make a necklace for her sister's birthday.


Fox received LaCossette's amazing tartan shuttle and immediately loaded it up with Venus #80 thread to work on Frivole’s heart, but distracted by a lively discussion and uncooperative thread it wasn't successful. The second try was much better, although she isn't happy with the chains. She gave her Doctor Who shuttle a try. It looks like it works quite well. She thinks the most recent heart isn't as clunky. 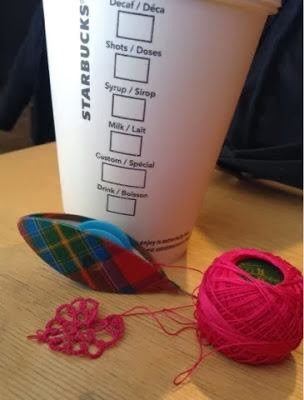 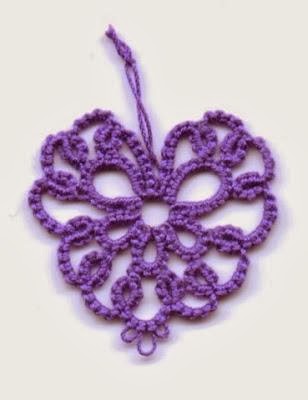 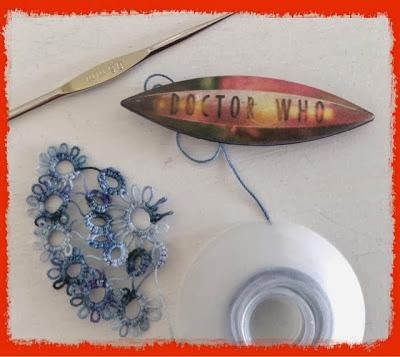 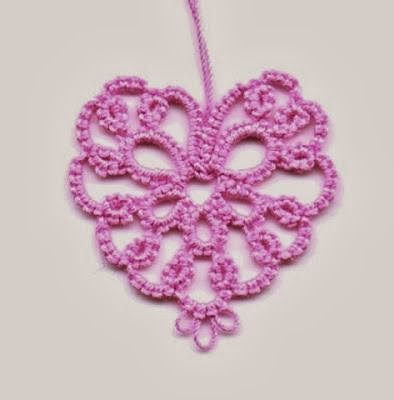 Kristen finally got the mast finished on her TIAS sailboat and set it on it's journey. She tried out Buttercup by Hannah Crowle from the Ring of Tatters 30th Anniversary Book of Patterns, but didn't tat it quite as written. The first motif of Adelheid Dangela's Doily was abandoned as the thread seems to have become soiled. Jane's Badger bookmark is giving her fits because she can't get the joins to work properly. Getting rid of that colour spot is causing her headaches with half of it looking right on the front and half looking right on the back. 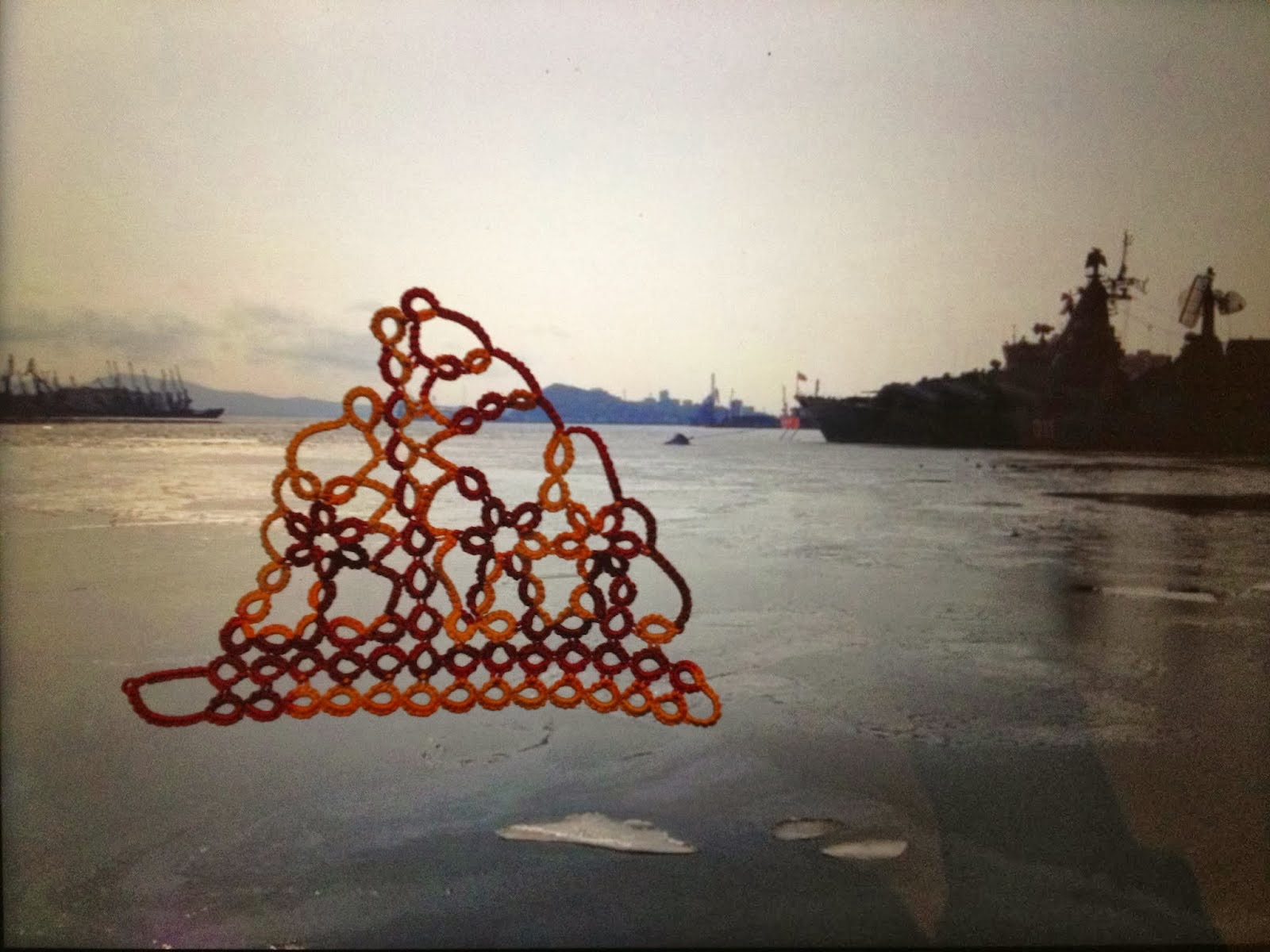 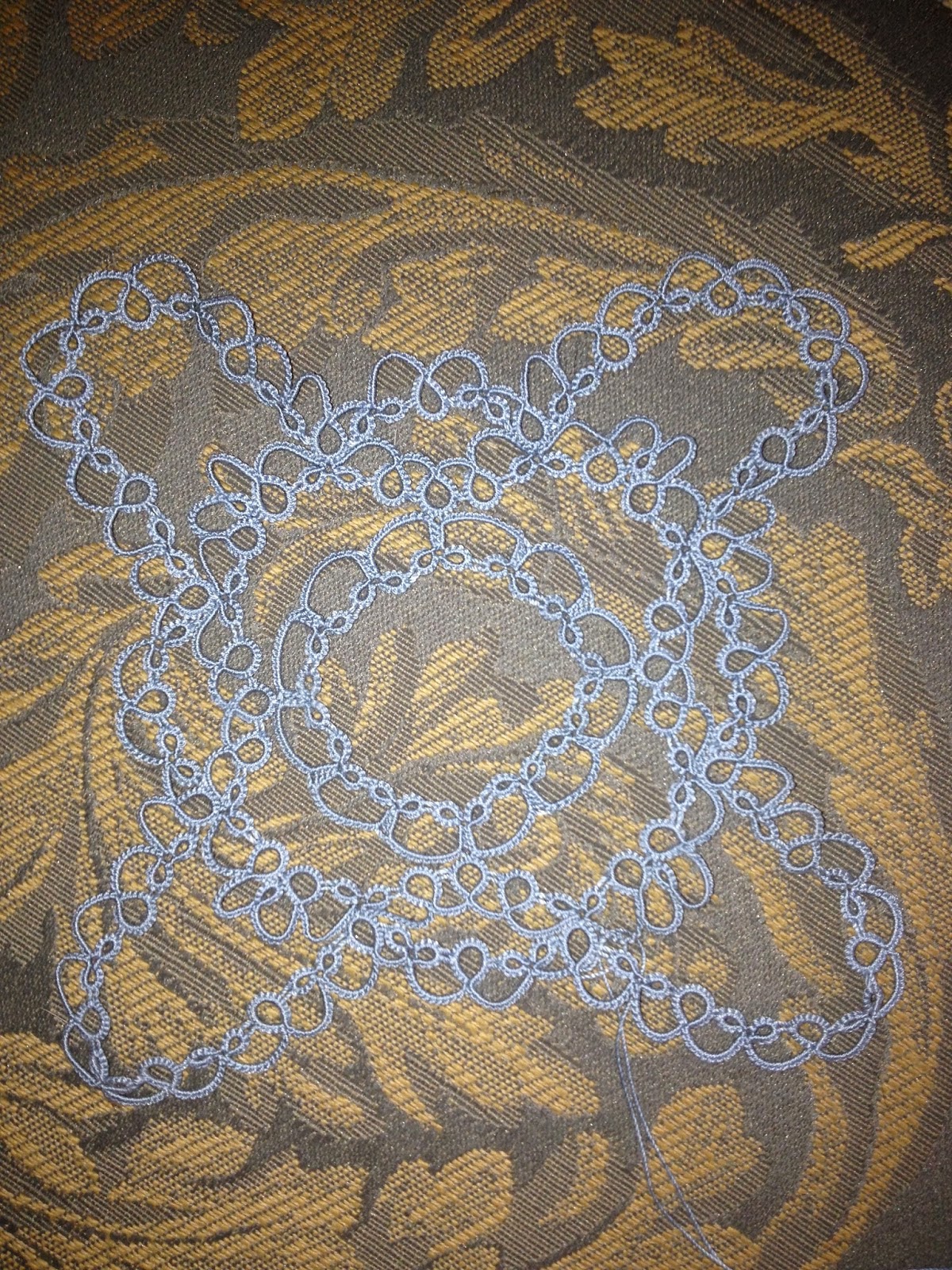 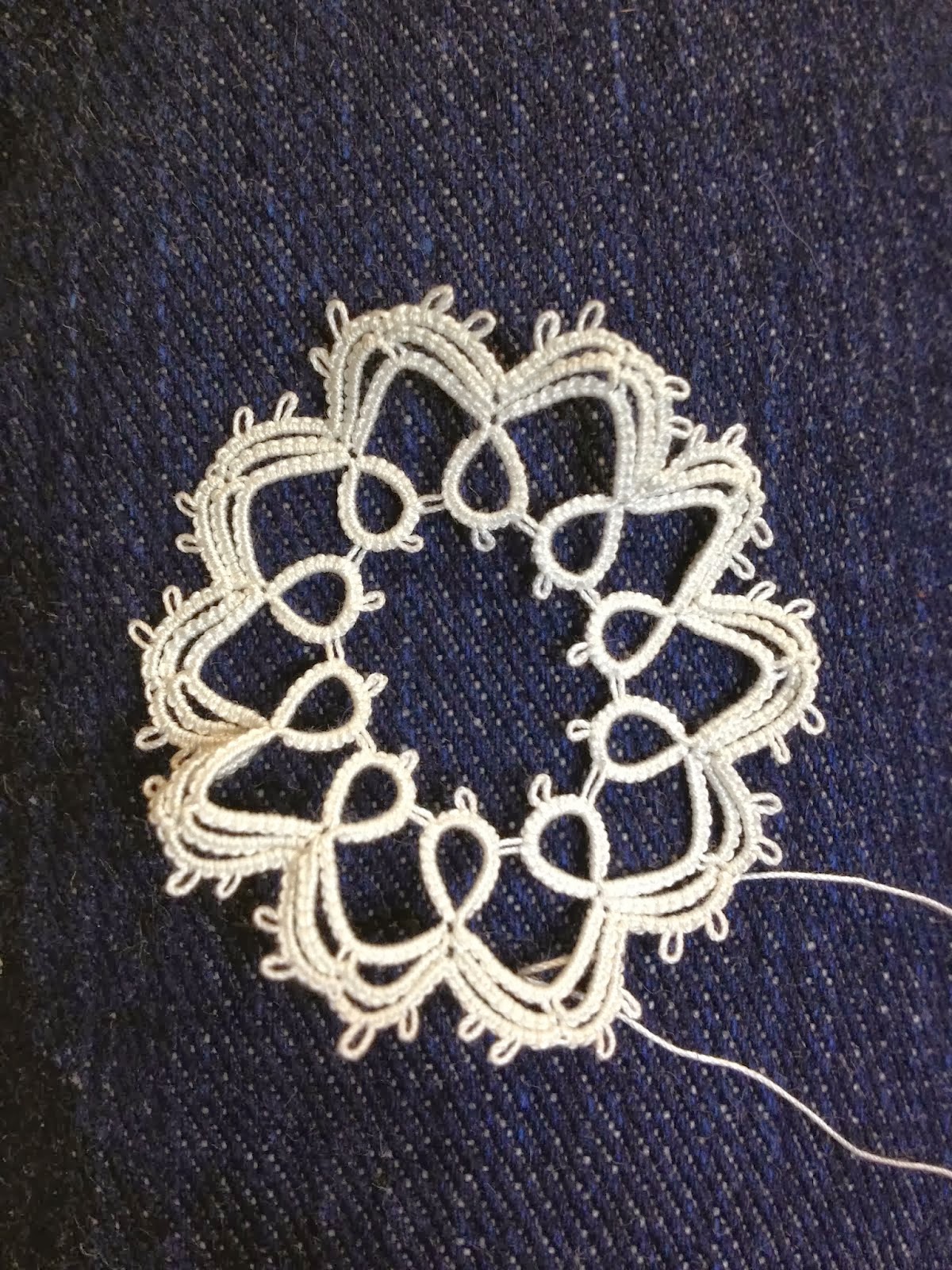 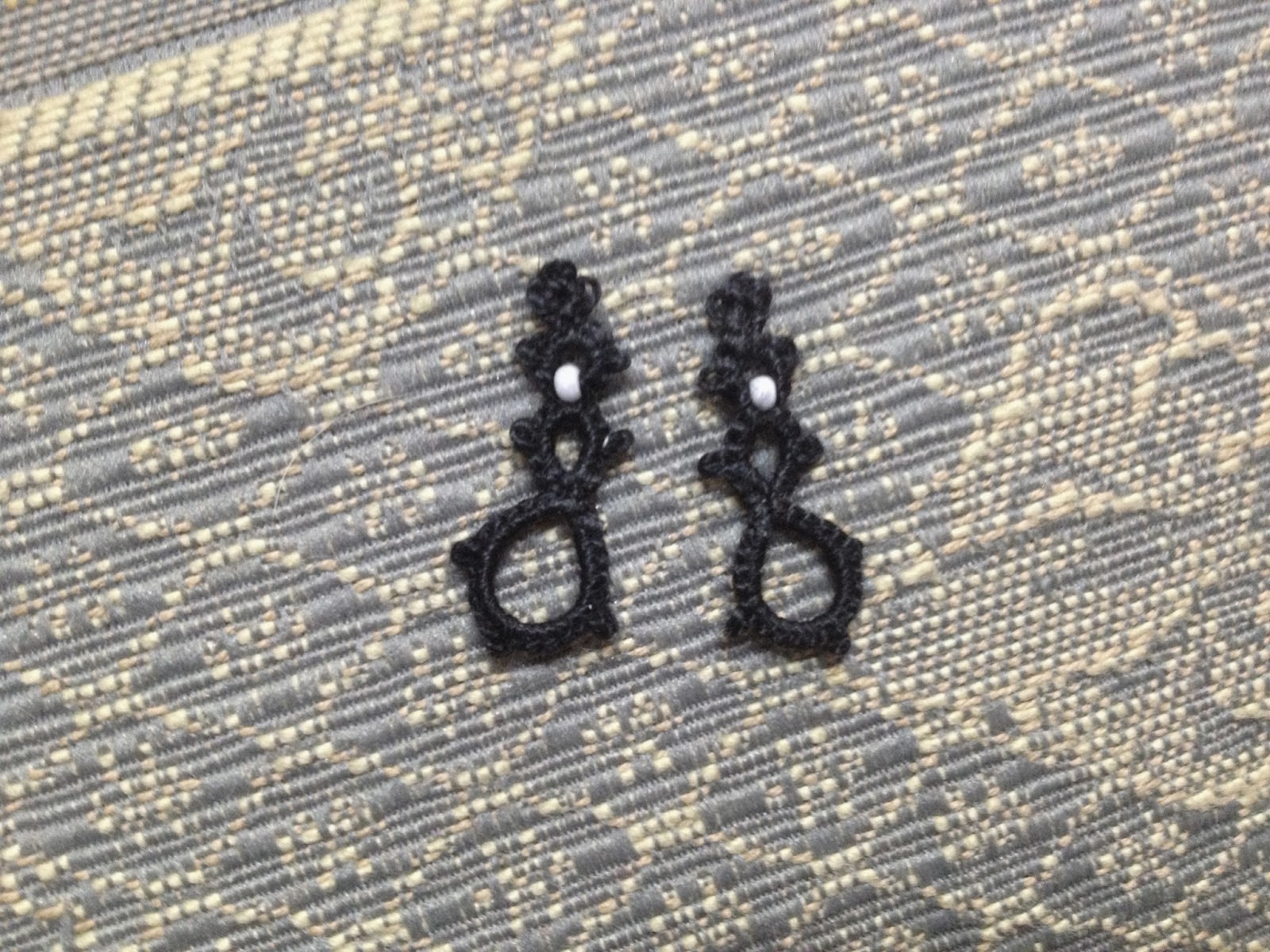 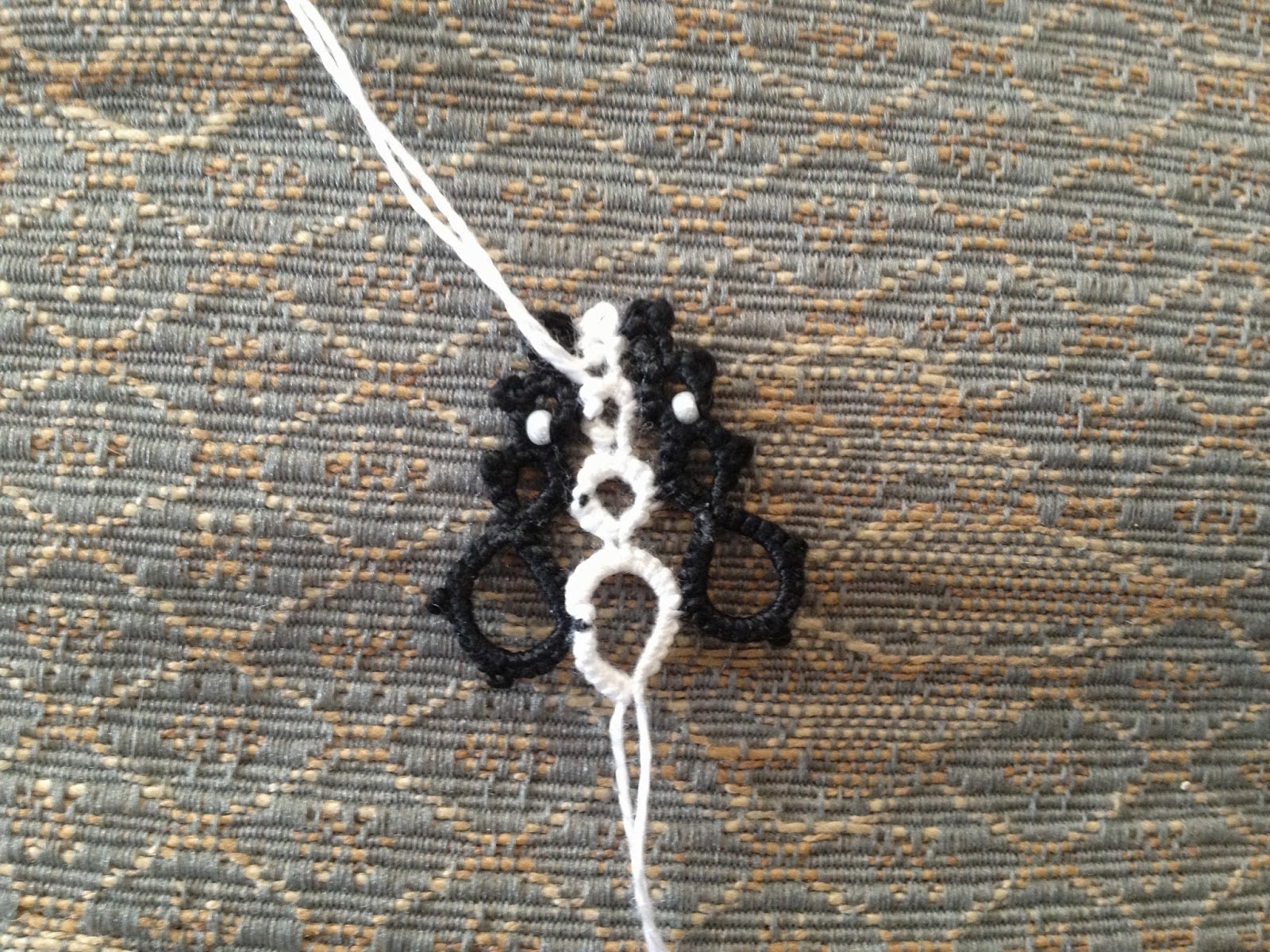 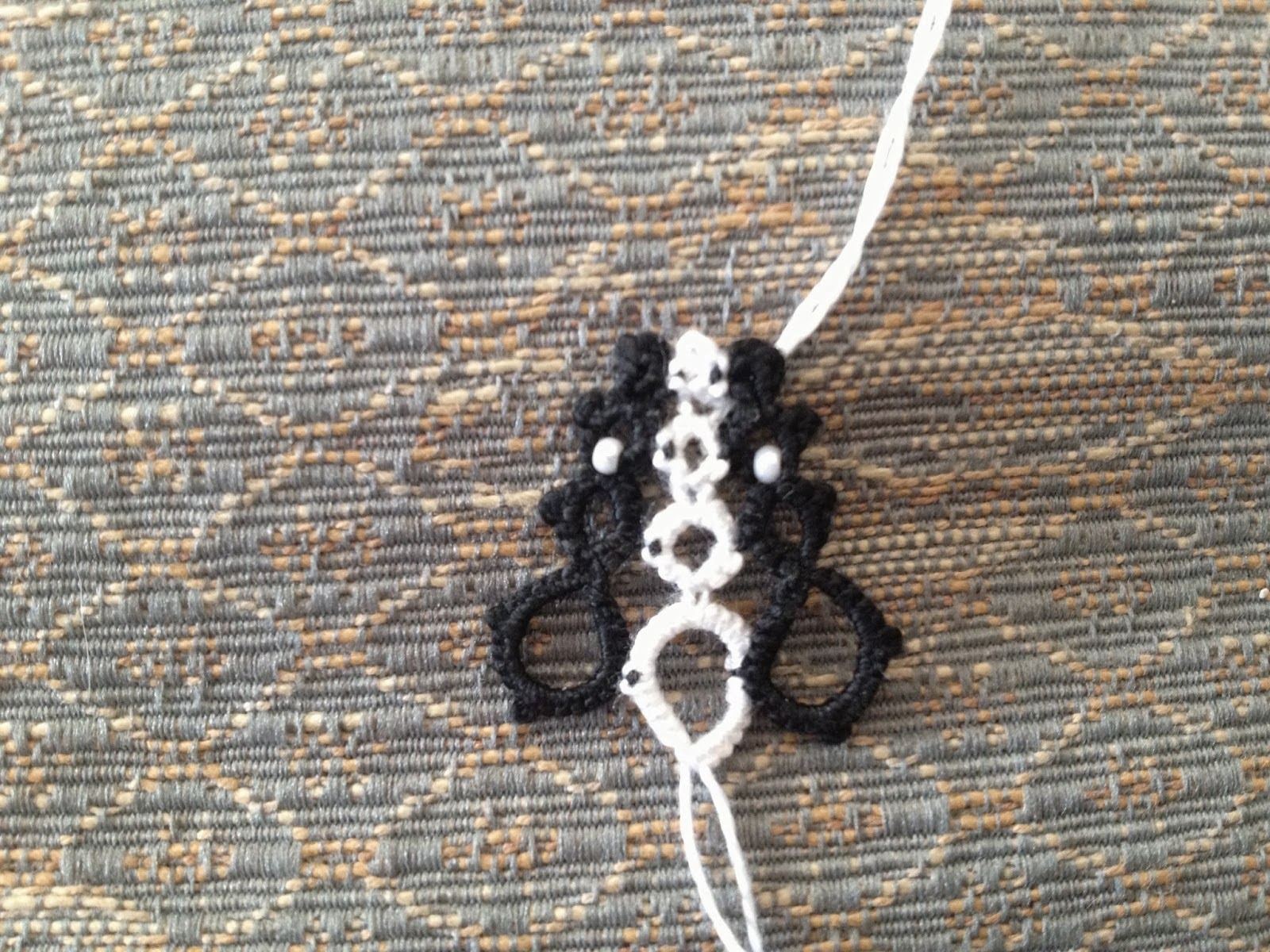 Margaret used up some of her tatting bits to make the decorations on the pincushion she created. The first one has a snowflake that went wrong and some blue 3D flowers, with a bit of ribbon and some embroidered trails. This yellow one was next, a piece of tatting which was going to be a square motif, that never got finished, which was tatted in Lizbeth size 20, enhanced by a small piece of green ribbon with a 3D flower tatted in Turkish Oren Bryan size 8 with a bead in the middle. 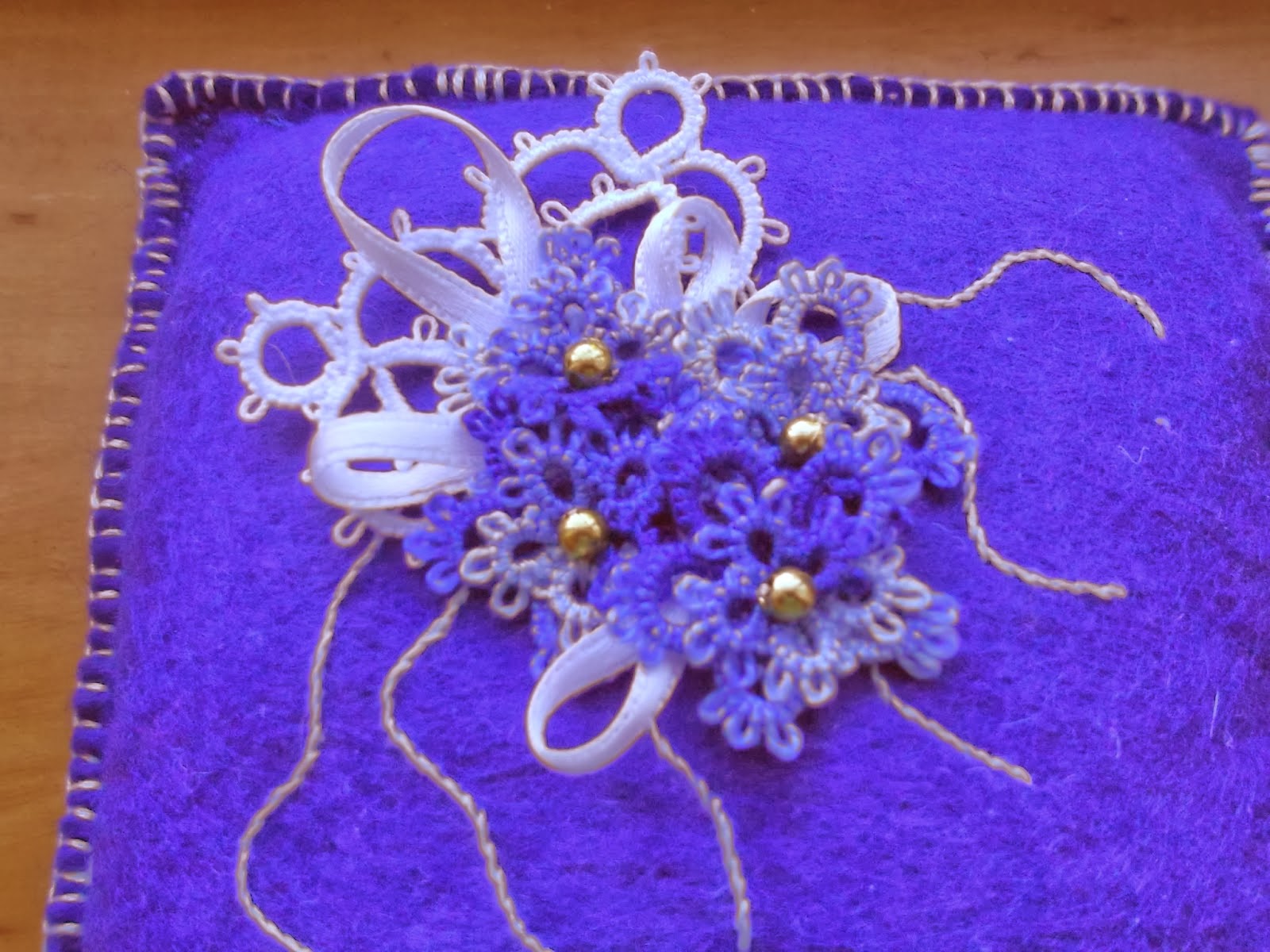 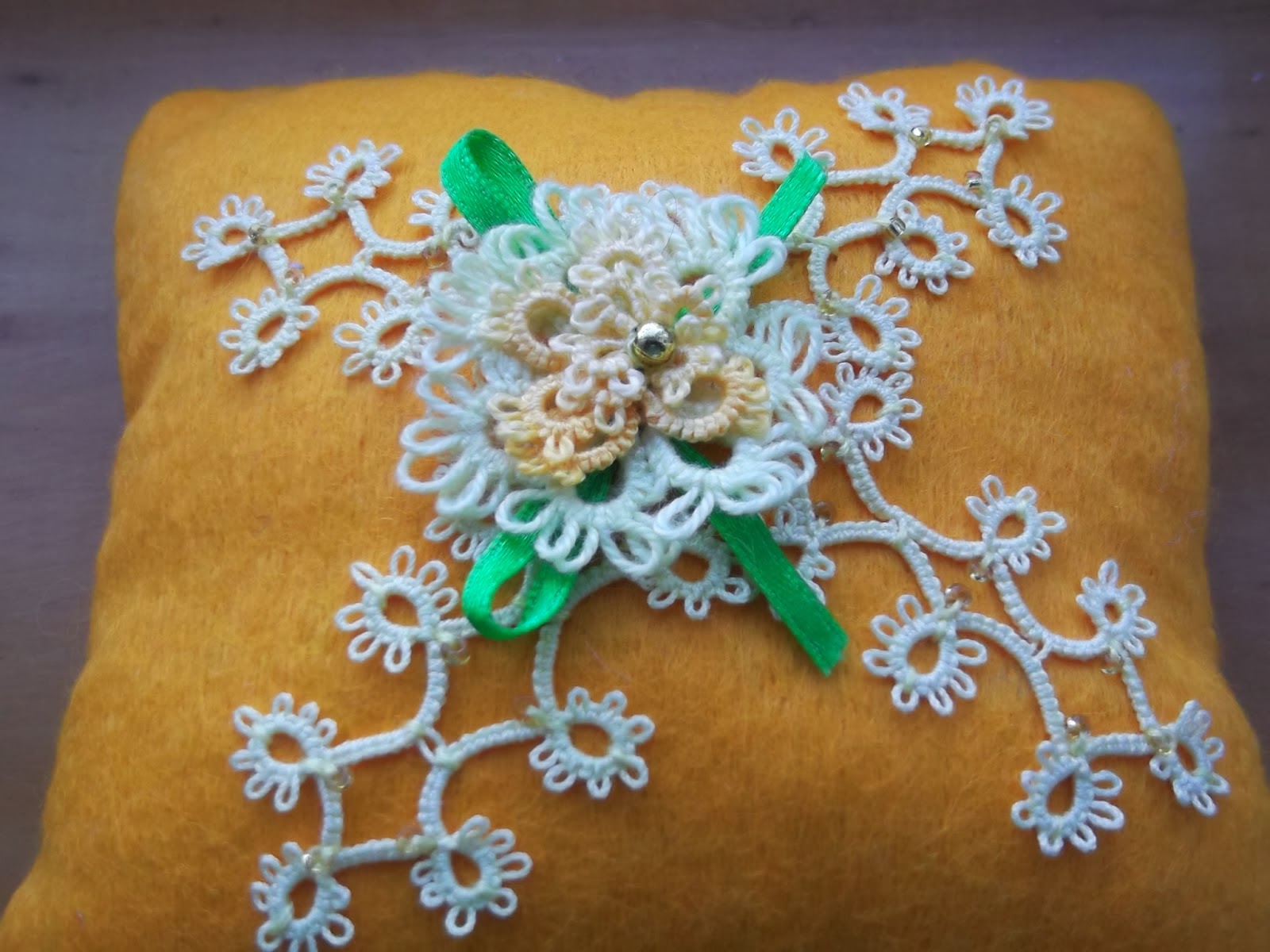 Marie tatted these earrings made with size 20 thread using a pattern from an old Work Basket. She used her new Celtic shuttles to tat a Celtic Knot Christmas Tree Heart, by Ruth Perry in size 40 thread. They worked, but were a little too tight. She outgrew her changeable earring box but the new one has ample room. 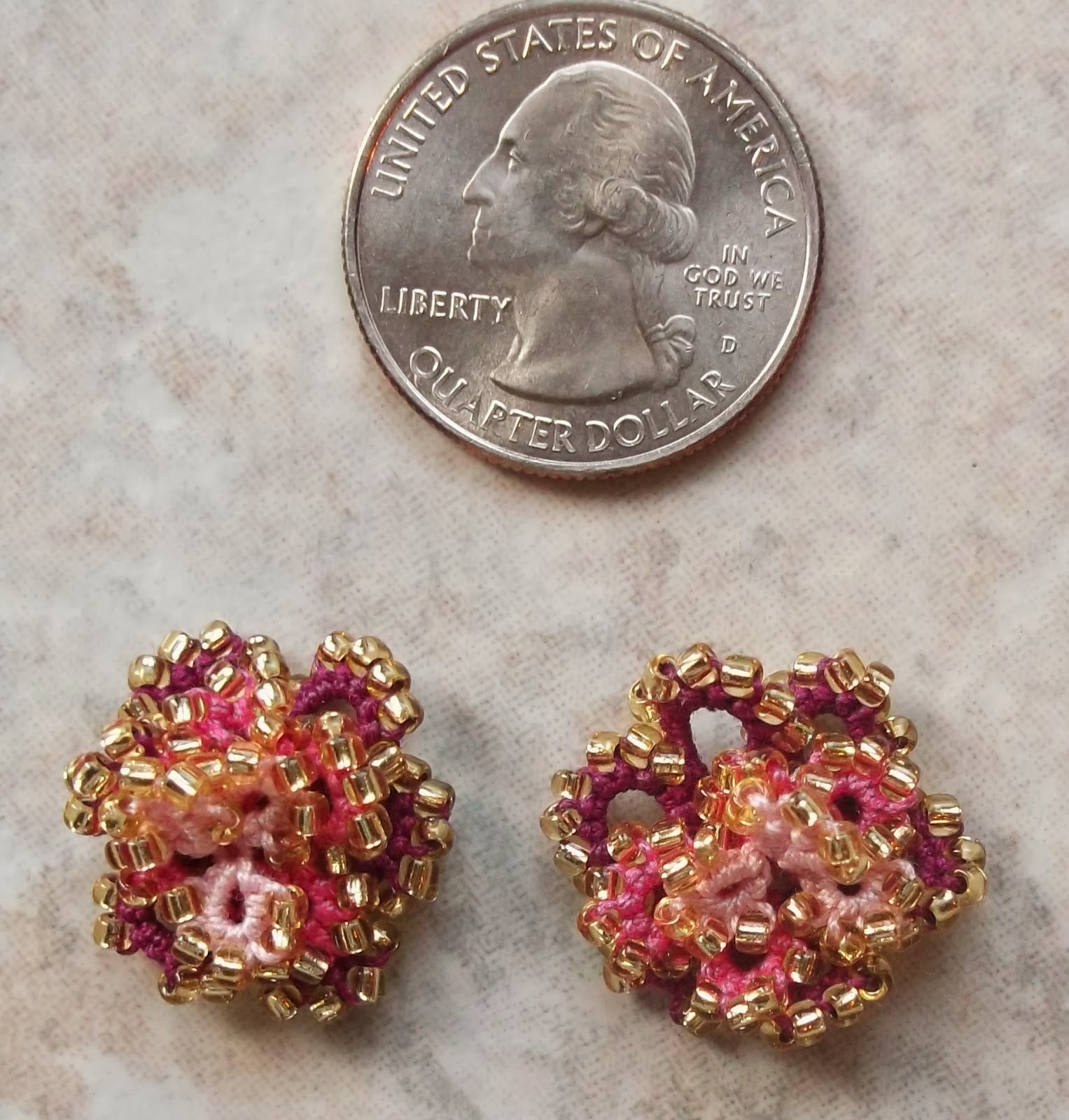 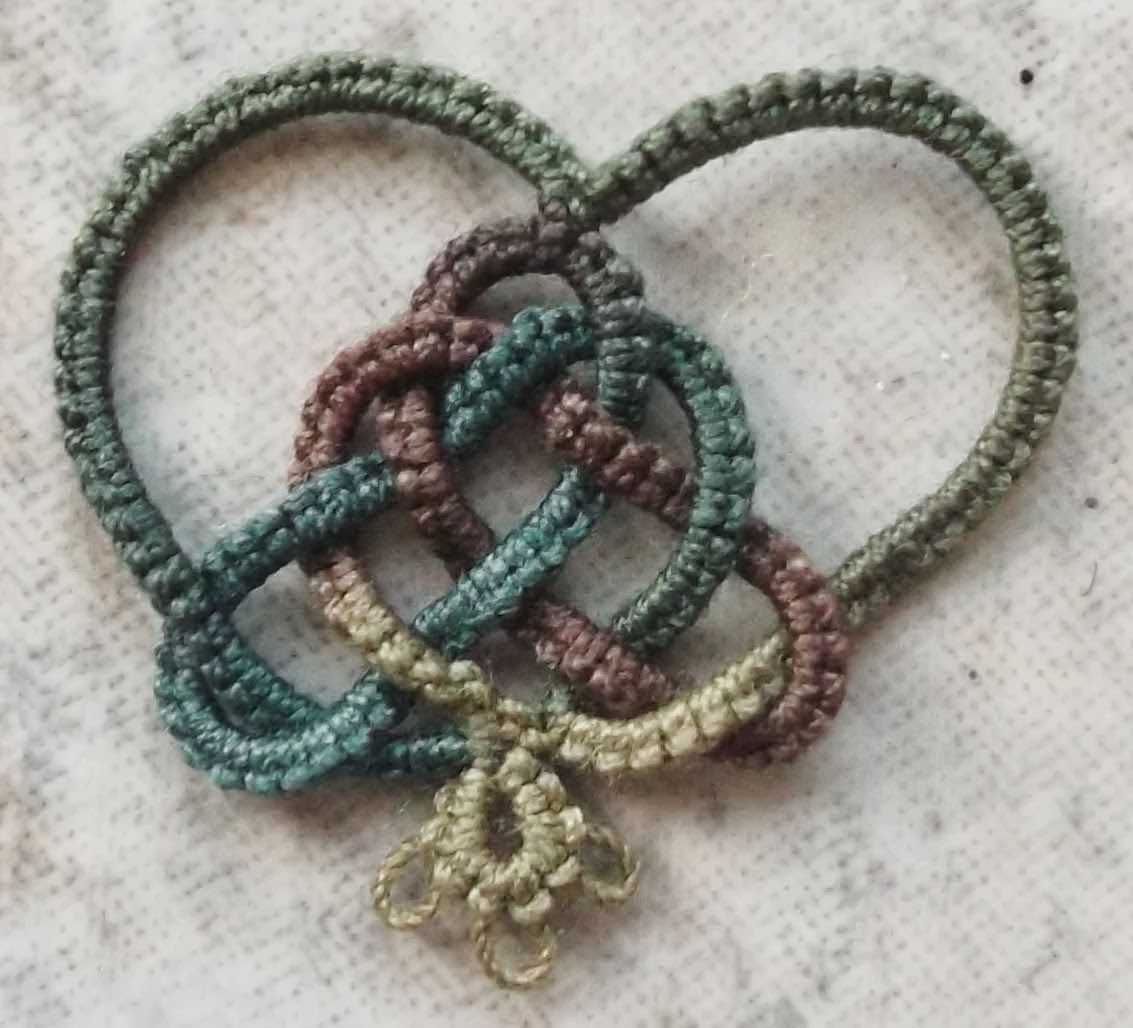 Sue tatted the Wedding or Anniversary Cross by Dee Powell from the book Tatted Bookmarks Needle & Shuttle edited by Barbara Foster, in DMC gold metallic thread and Lizbeth Snow White size 20. She received this pin from Fox and highlighted it a bit with some tatting in size 40 HDT from Jess. She did another suncatcher for her mother-in-law's friend using Sue Hanson's Val's Suncatcher pattern, tatting in size 40 Lizbeth Tropical Punch with kid's pink beads. 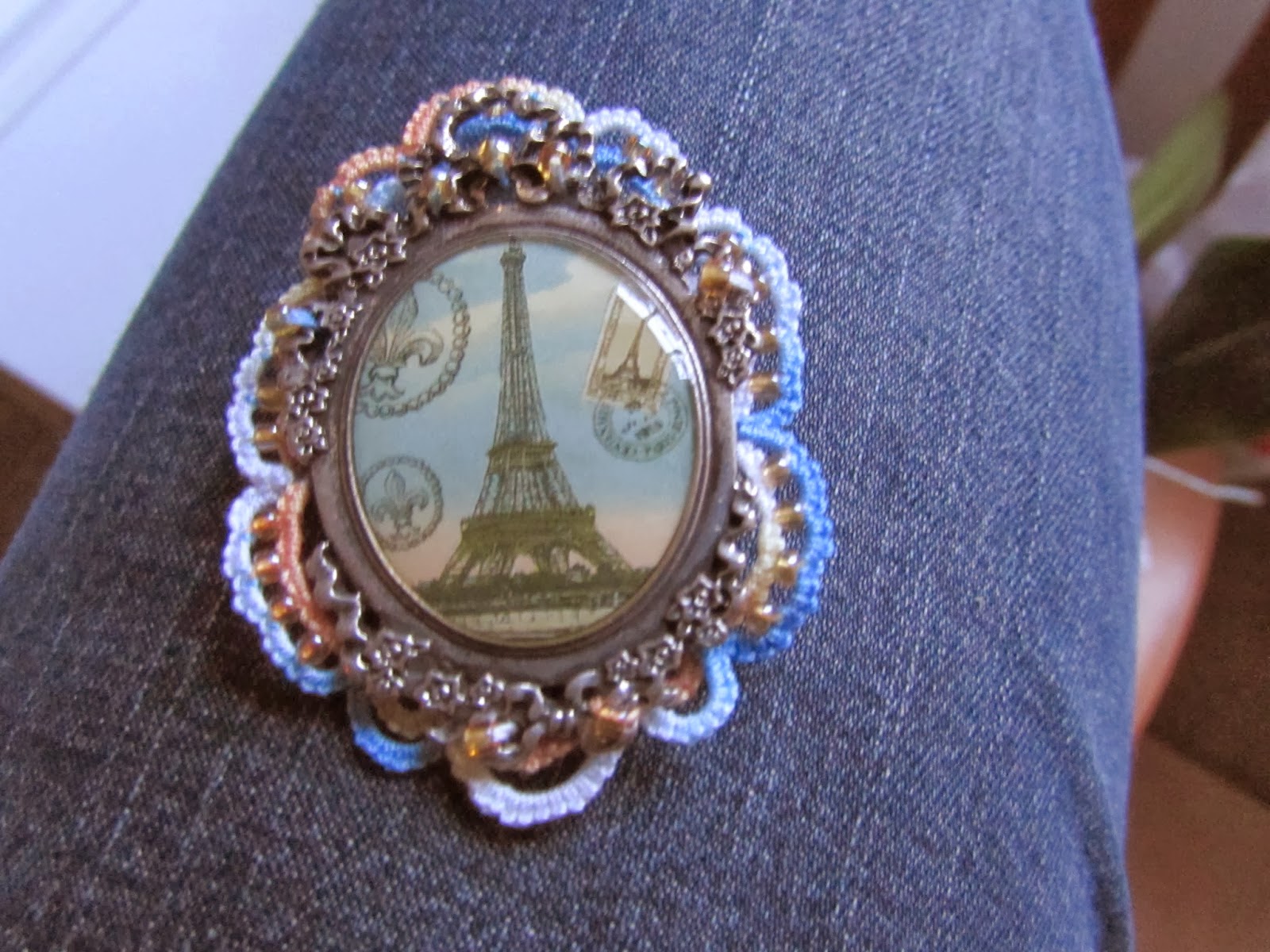 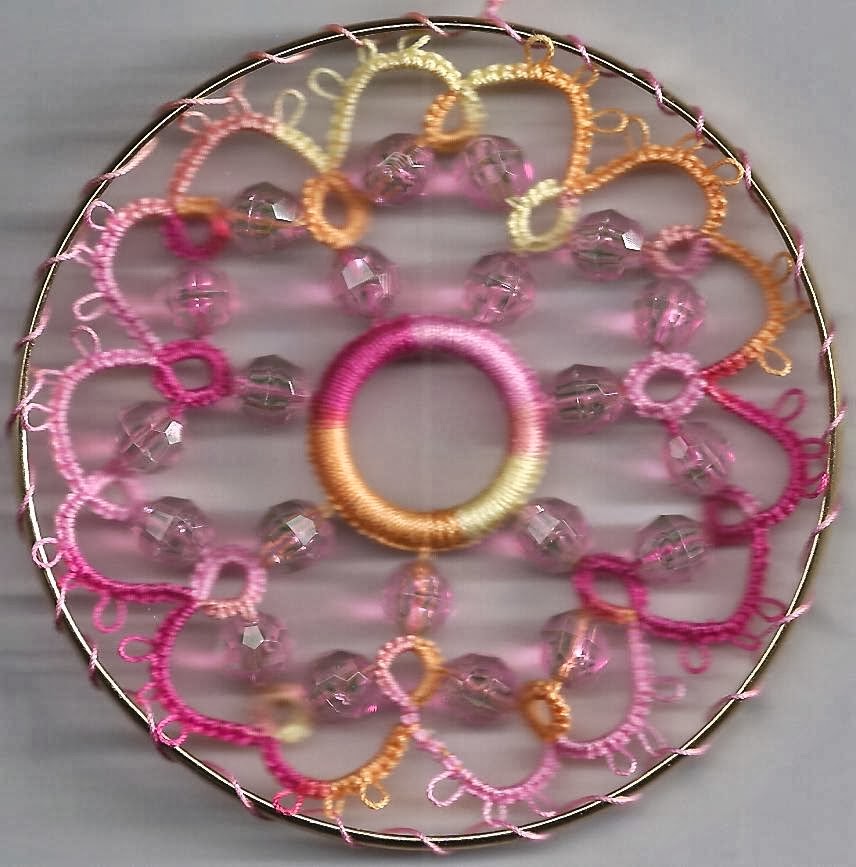