Batty Tatter plans to use Eileen's clover snowflake for the front of a cap. Lilas had a lot of little beads on black DMC size 80 thread, so she make earrings with it. She has been experimenting with different designs, starting with this cloverleaf motif, she added beads to work a whole new design working with black Cébélia size 30, but the thread seems too soft and thick. She started again using Cébélia size 40 in white little Miyuki rocaille pearls and she really likes the effect of the 3 beads on the joins. 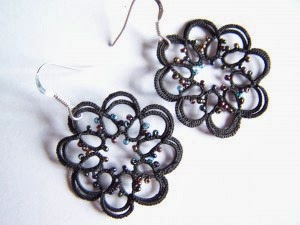 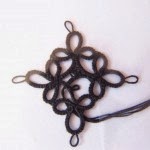 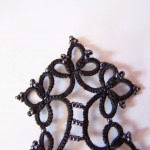 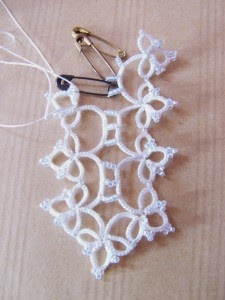 Sue has finished the edging she was working on and attached it to the hanky so she can display it at her Lace Group meeting on Saturday. 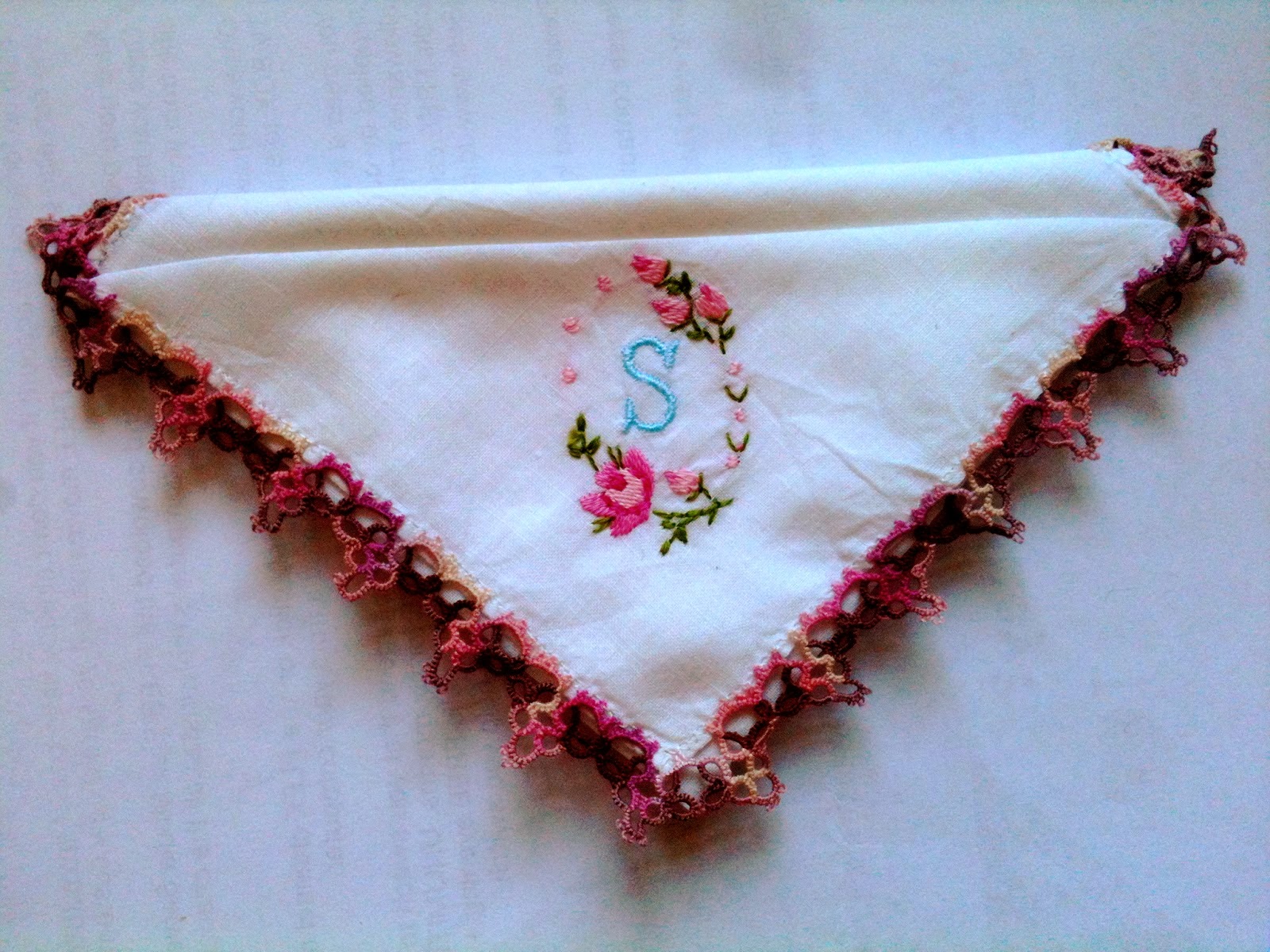 Lelia's girlfriend saw a tatted trim in the Hens and Chicks pattern and she wanted it. Lelia found the pattern in the Rebecca Jones book, Complete Book of Tatting and she did several samples of it before settling on Lizbeth size 20 in an off white colour to make it. Here is the final project with the tatting attached. 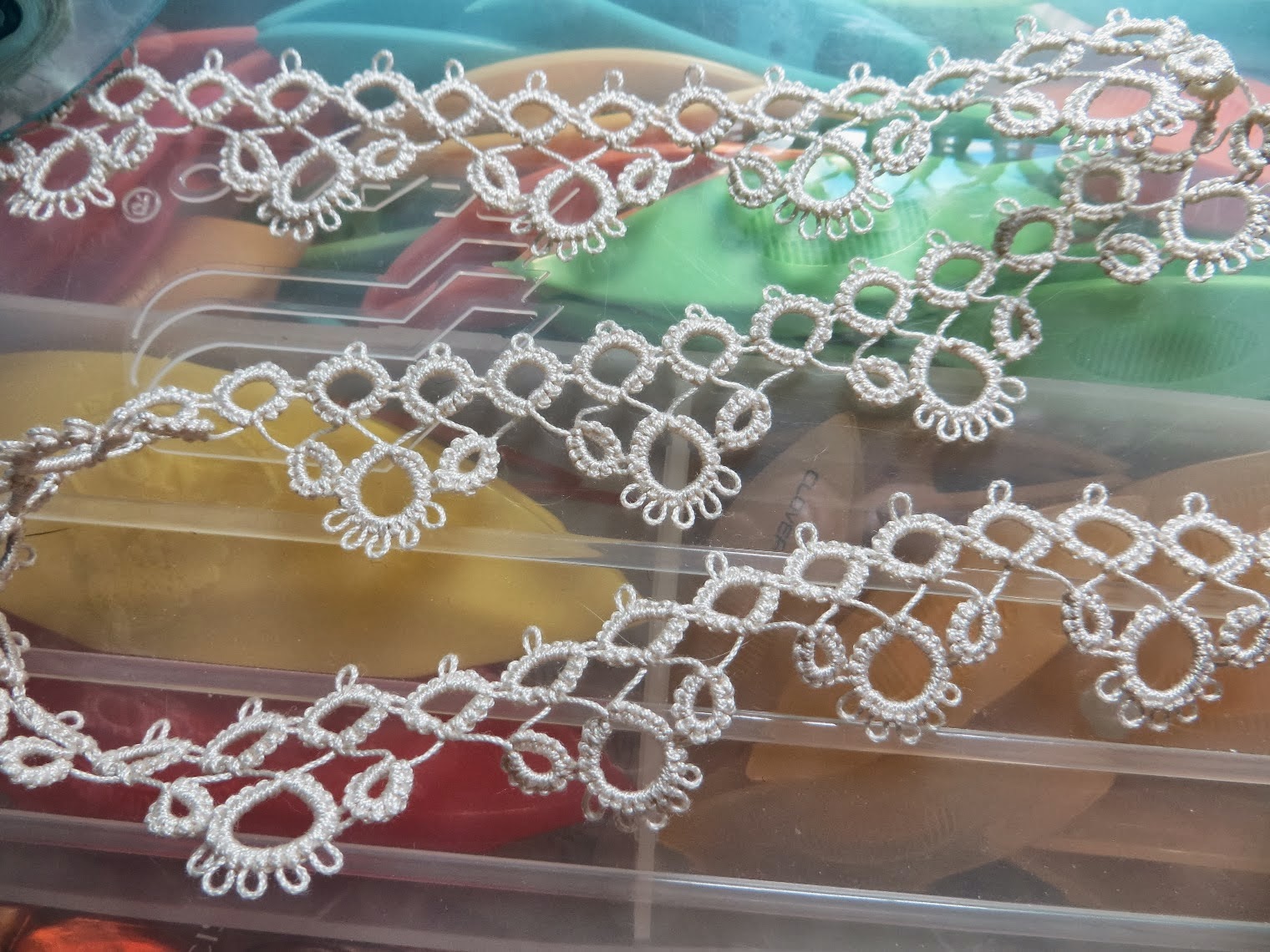 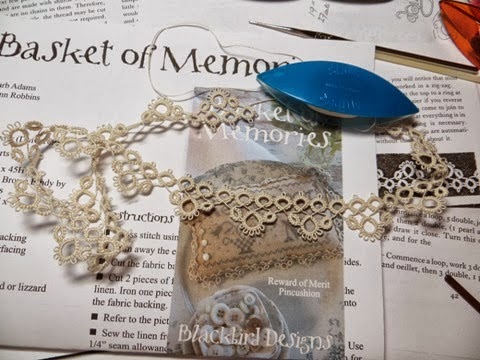 Nancy made Betsy Evans Tatted Wreath in spring colours to sit under the ice cream sundae dish filled with coffee beans. When the candle is lit the house is filled with the aroma of coffee. 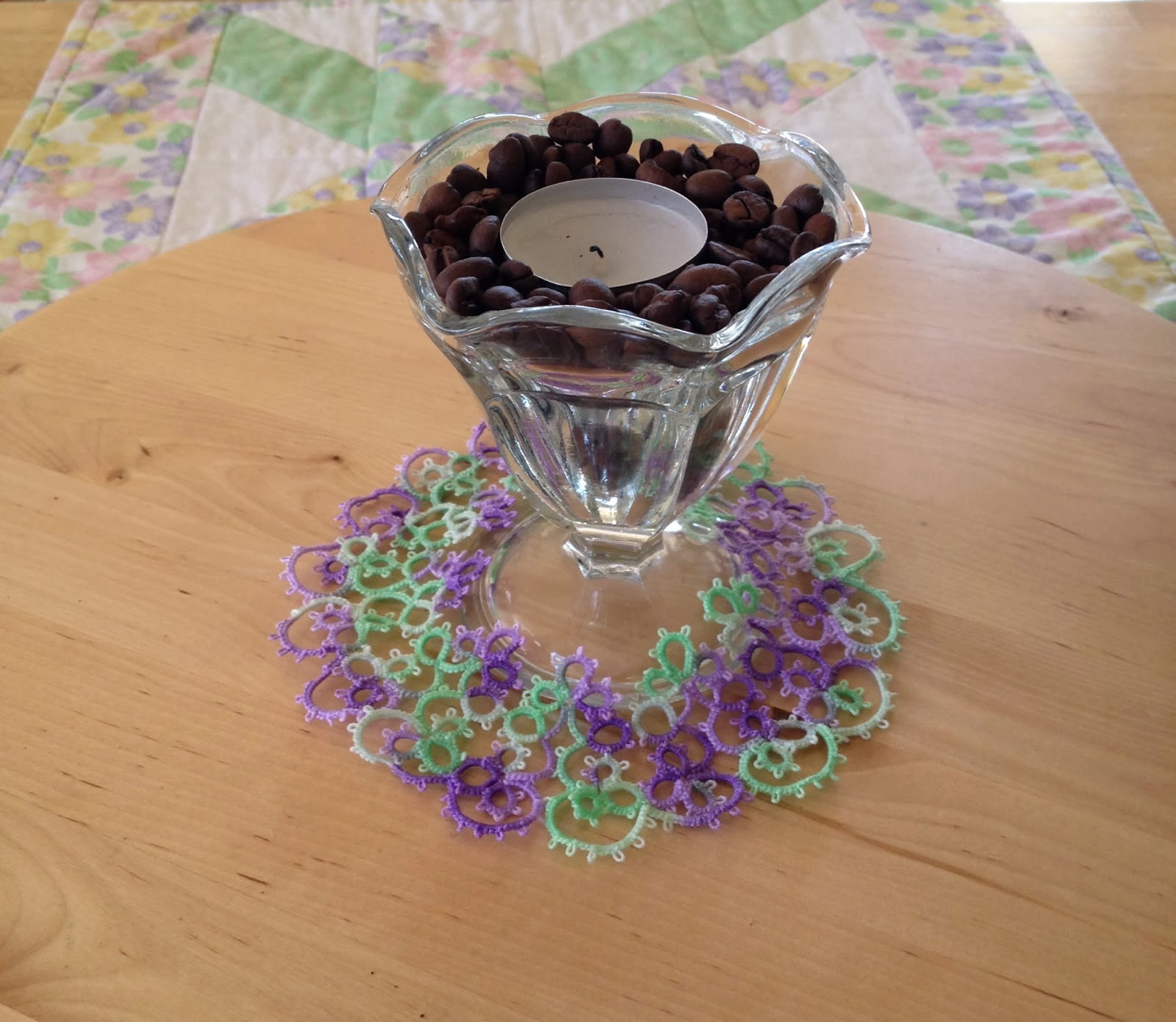 Linda cut out sparkly felt shamrock and sewed Susan Taliaferro's Frilly Shamrock on it. Then she tatted a chain edging with lots of picots and shuttle joined in around the felt. These are a few edgings she tried but didn't like. The first is tatted with sulky size 30 and the other two with size 80 Lily Thread. The 4 leaf clover is tatted with size 20 Lizbeth Leaf Greens using a pattern by Mariyas. 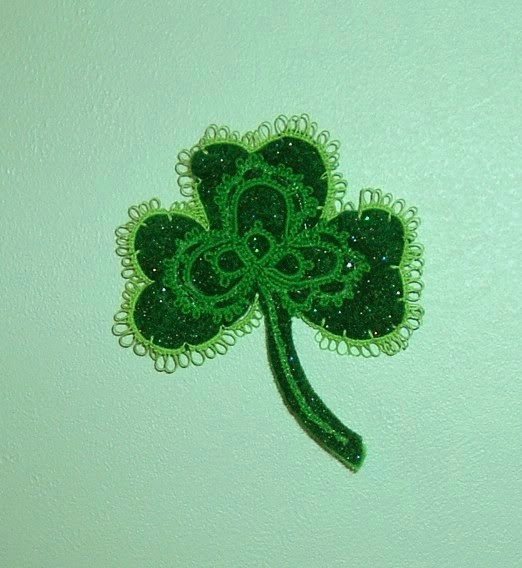 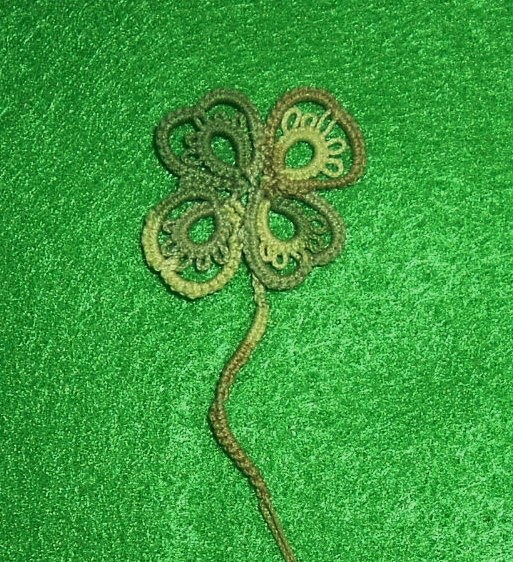 Grace's Mom collects teacups, and she thought a cup and saucer set for Mother's Day would be nice. The teacup is worked from a vintage pattern she bought on Etsy. It's delicate, dainty, in fact it's downright minuscule. She's working on this Anne Orr motif but the colour is closer to that depicted in the finished motif.


Diane's students are tatting away. Emma did a length of Josephine chain. Shelby tatted a long section of chain and one of the girls coiled it up to see how the 3D acorn Stephanie sent was made. Diane started round 3 of Labor no. 10 from Frivolite 1 Creaciones Artime. A snow day means that Diane had time to work on her doily. Paige has been working on rings and chains and chose a flamingo as her prize. Brooke patiently tatted two three-inch lengths to earn this tatted lion. After finishing their lessons the kids help one another out with their tatting. Meanwhile, Diane managed to finish two more pattern repeats on round 3 of her doily. 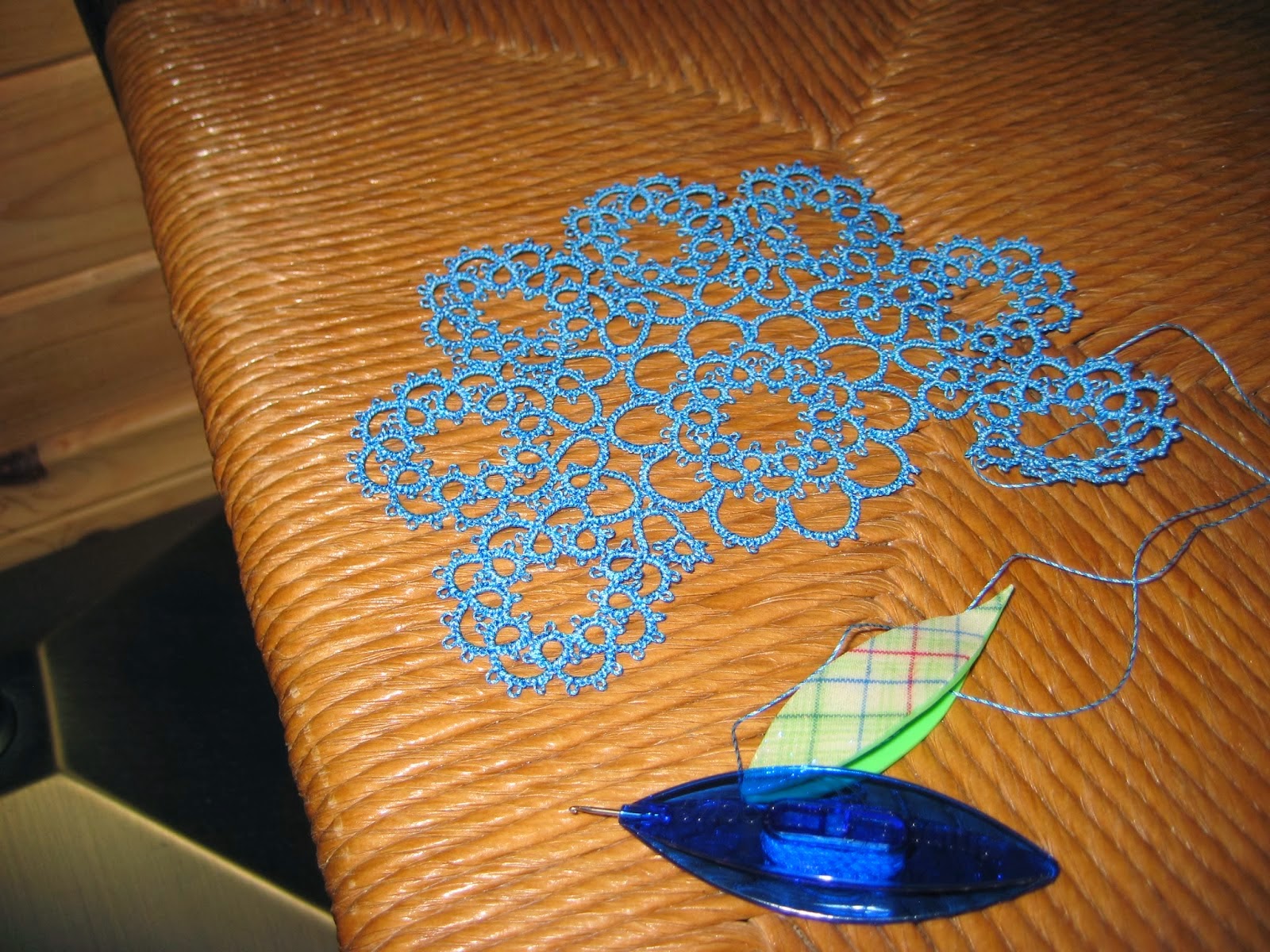 Fox receive a lovely package from Kristen full of tatting goodies. This amazing tatted shuttle case was a gift from Umintsuru. 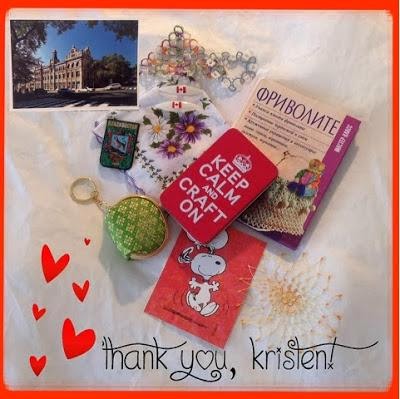 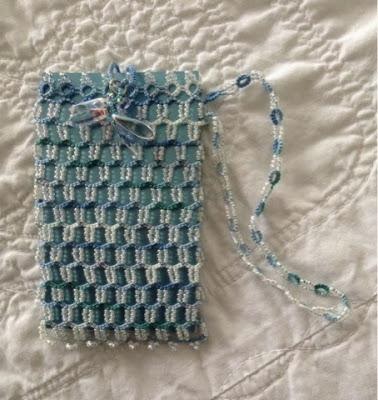 Marie used my pattern to tat these ice skates for her 10 year old niece who loves to skate. She tatted Iris Niebach's Francesca in Lizbeth Mountain Breeze size 20. 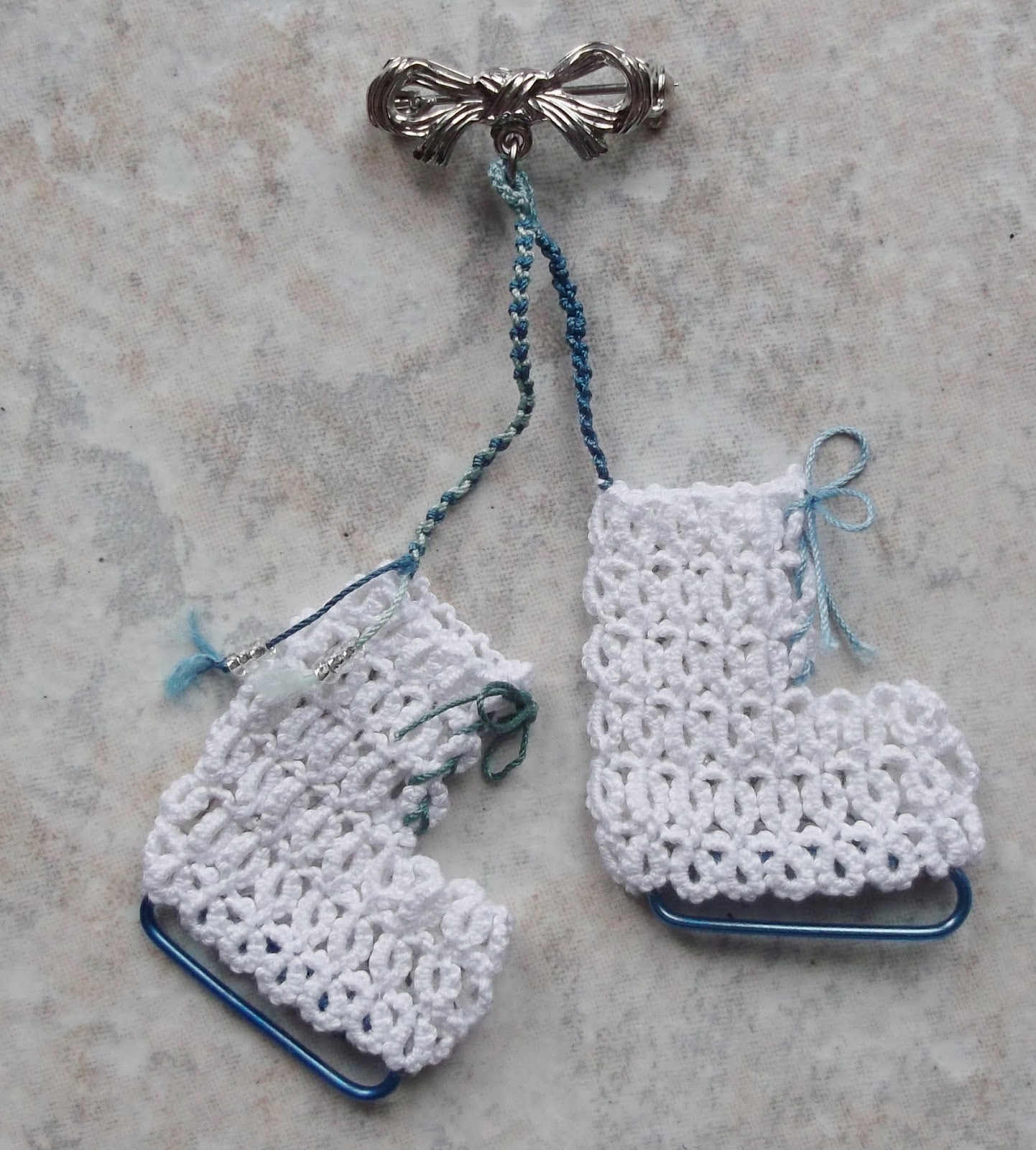 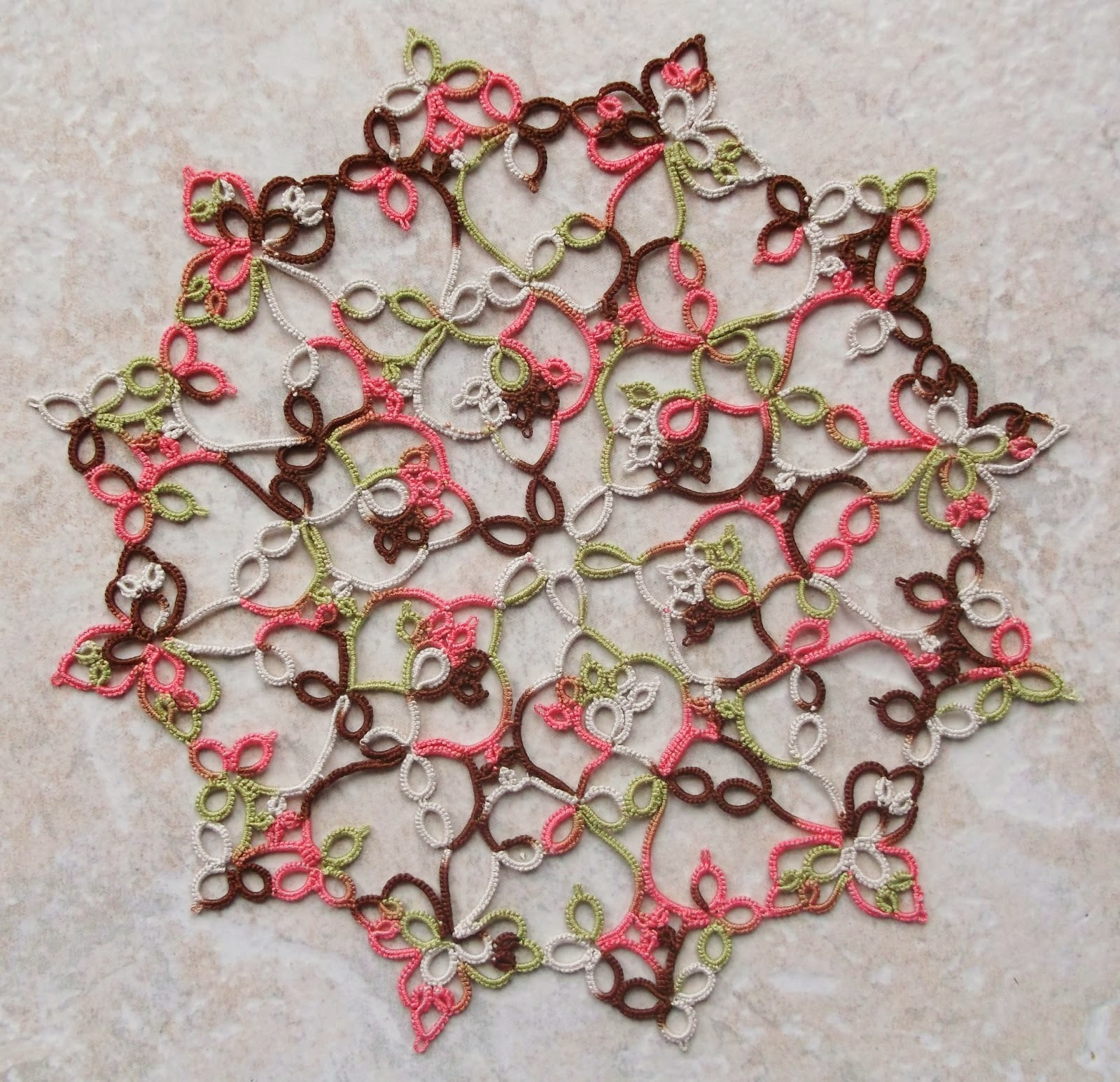 Martha needed a break and decided to tat Robin Perfetti's Woodland Medallion with a square finding. 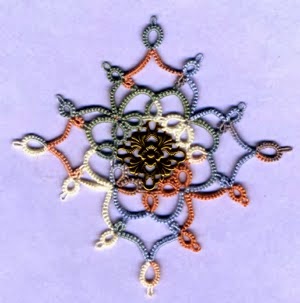 Sue found the pointers given to her helped her with this edging, although now that she knows how to do it, she's decided that it will take more time than she has right now.

Wanda thought she had everything she needed to make a button bracelet, only to find out that the thing she had forgotten was the buttons, so she used washers instead. Lizbeth black in size 20, silver beads, and 7/16" washers make this lovely lace and she'll have the pattern ready for it soon.